How we dry our hands has more of an impact than you might imagine. 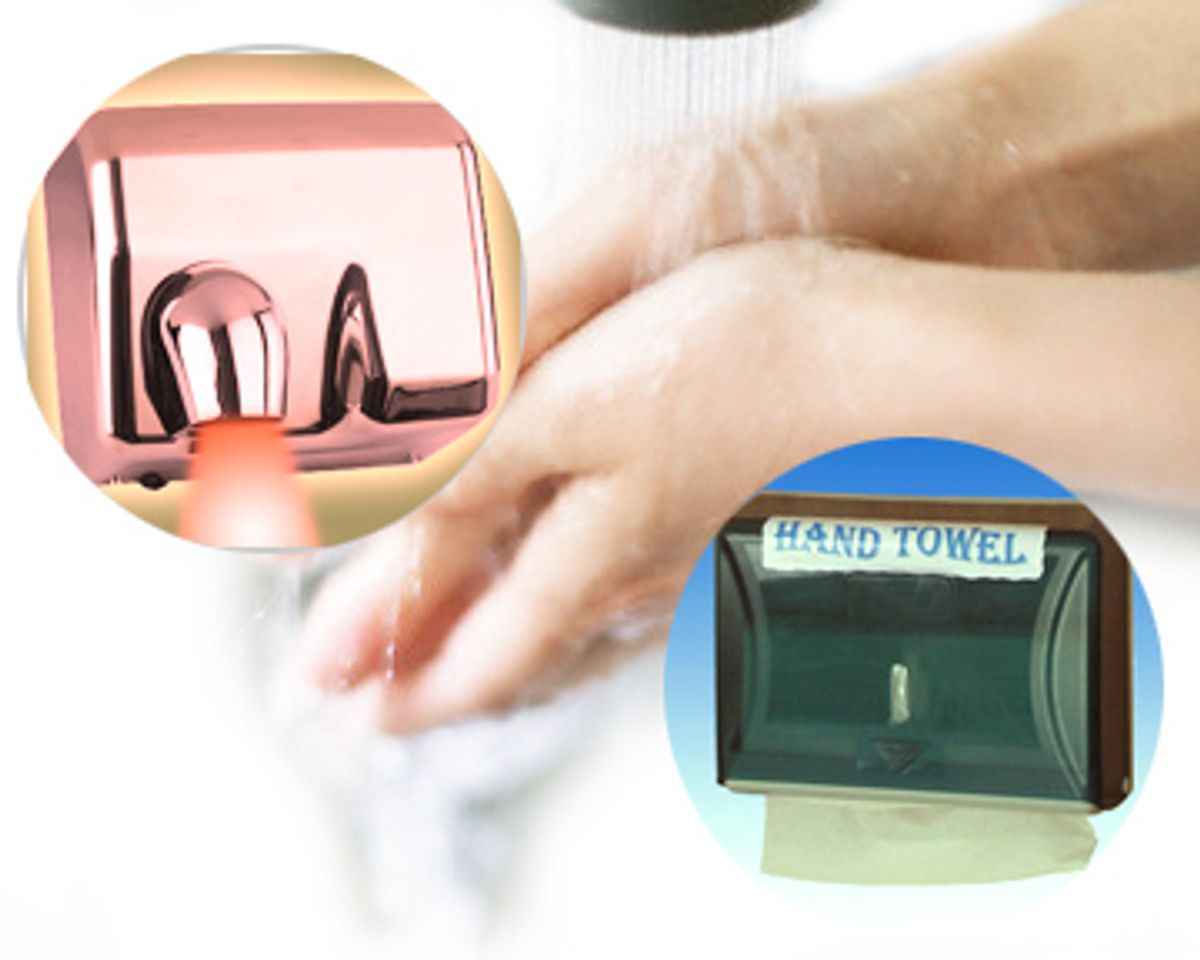 On a recent Saturday visit to the local mall, several simultaneously flushing toilets and the piped-in sounds of Kenny G were the soundtrack to my latest environmental dilemma. There I was in the public restroom, my hands dripping from a trip to the sink, momentarily paralyzed by a perennial environmental quandary: Should I dry my hands with a paper towel or use the air hand dryer? A sign emblazoned on the dryer professed: "Dryers help protect the environment. They save trees from being used for paper towels. They eliminate paper towel waste." But then the dryer also sucks down electricity. What would Al Gore do?

I realize this may sound ridiculous. What is one or two paper towels or 30 seconds of hot air compared to the emissions belched from cars stacked on I-84? But consider the following: So far this year Americans have used 1.8 million tons of paper towels and tissue, according to the American Forest & Paper Association, an industry group. There are approximately 3 million hand dryers installed in the country and most run for 30 seconds around 100 times a day, according to World Dryer Corp., one of the country's leading manufacturers. That's 5.7 million kilowatt-hours of electricity used every day -- enough power to run an estimated 197,000 homes a day.

"While this one little decision doesn't seem like a big deal, it's worthwhile to evaluate our modern consumer life," says Michael Kadish of TerraPass, which sells carbon-emission offsets. "How we bag our groceries, what kinds of light bulbs we use, whether we use paper coffee cups or bring our own -- all these things have real effects in terms of climate change. These individual choices really add up."

He has a point. Imagine all the sports stadium bathrooms, strewn with paper towels during halftime, the movie theater restrooms abuzz with the sound of an active hand dryer, the hundreds of thousands of office buildings and restaurants with people pouring in and out of bathrooms all day, and suddenly you are faced with a real environmental predicament.

What's the greenest way to dry your hands? Existing studies that look at the issue of paper towels versus hand dryers have been funded by either the paper or hand dryer industry, with results that predictably back up the claim of whoever paid for the research. So the Climate Conservancy, a nonprofit group started by Stanford University climate scientists, which aims to help consumers determine the greenhouse gas emissions associated with products, helped me crunch some numbers. Its calculations look not just at carbon dioxide, but the other five gases, identified by the Kyoto Protocol, that contribute to global warming (methane, nitrous oxide, perfluorocarbon, hydrofluorocarbon and sulfur hexafluoride) to get what is called a CO2 equivalence.

Folks at the Conservancy considered the life cycle of the paper towel. They measured how much carbon it takes to produce, transport and dispose of a paper towel. They found that using one paper towel drains the equivalent of one ounce of greenhouse gases, while hitting the button once on the World Dryer 2,300-watt model accounts for less than half an ounce. Think of it this way: One ounce of greenhouse gas emissions -- or one paper towel -- is equivalent to driving one-sixteenth of a mile in an average car.

While the dryer wins the race, we need a point of clarification for the much maligned paper towel. Paper towels are made primarily from wood chips, the leavings from logs milled for home building, or recycled paper, says Mark Lewis of the University of Washington's paper science and engineering program. It's not as if fresh trees are cut down to become paper towels. Furthermore, leading manufacturers, like Georgia Pacific and Kimberly Clark, increasingly use up to 100 percent recycled fiber from the United States. The Climate Conservancy did not include recycled paper in its calculation, so it's possible the energy consumed by the paper towel could be slightly less than it figured.

Also, hand dryers in places like the Pacific Northwest -- where hydropower, not coal, is the major producer of energy -- produce fewer greenhouse gas emissions than the Conservancy's calculations. The trade journal Environmental Building News has long touted dryers as superior to paper towels; the headquarters of the U.S. Green Building Council, for instance, uses Excel Dryers, an energy-efficient dryer, exclusively in its Washington, D.C., office restrooms.

However, the word has yet to catch on. Portland's Ecotrust building is the country's first restored historic building to receive a Leadership in Energy and Environmental Design certification. Yet inside you won't find hand dryers. One of the nation's largest environmental groups, which I promised would go unnamed, uses paper towels in its offices. Even at the vegan restaurant down the street, where I thought for sure I'd find a hand dryer, there was nothing but towels, overflowing in the trash.

Anyway, the hand dryer would seem to be the wise choice. But hold on. There's something else to consider. The average temperature of air that flows from a warm air dryer is insufficient to kill most bacteria, according to a 1998 study by Britain's University of Westminster. The study finds that paper towels removed 58 percent of the bacteria from people's hands. Air dryers, meanwhile, increase the numbers of all sorts of bacteria by 255 percent! That's because the dryers either suck up germs and then spew them back out, or people don't spend the necessary time under the heat to kill the germs. (For the record, I didn't even consider those cloth hand towel machines that you still sometimes see. Not only are they usually jammed, they are disgusting, coated with what I can only guess are layers of untold germs.)

So in a way, the bathroom dilemma remains. Faced with doing something for the sake of the planet versus the sake of my health, I quickly stop worrying about melting polar ice caps. There is, of course, always a third option -- I can wipe my wet hands on my jeans.