The strangers next door 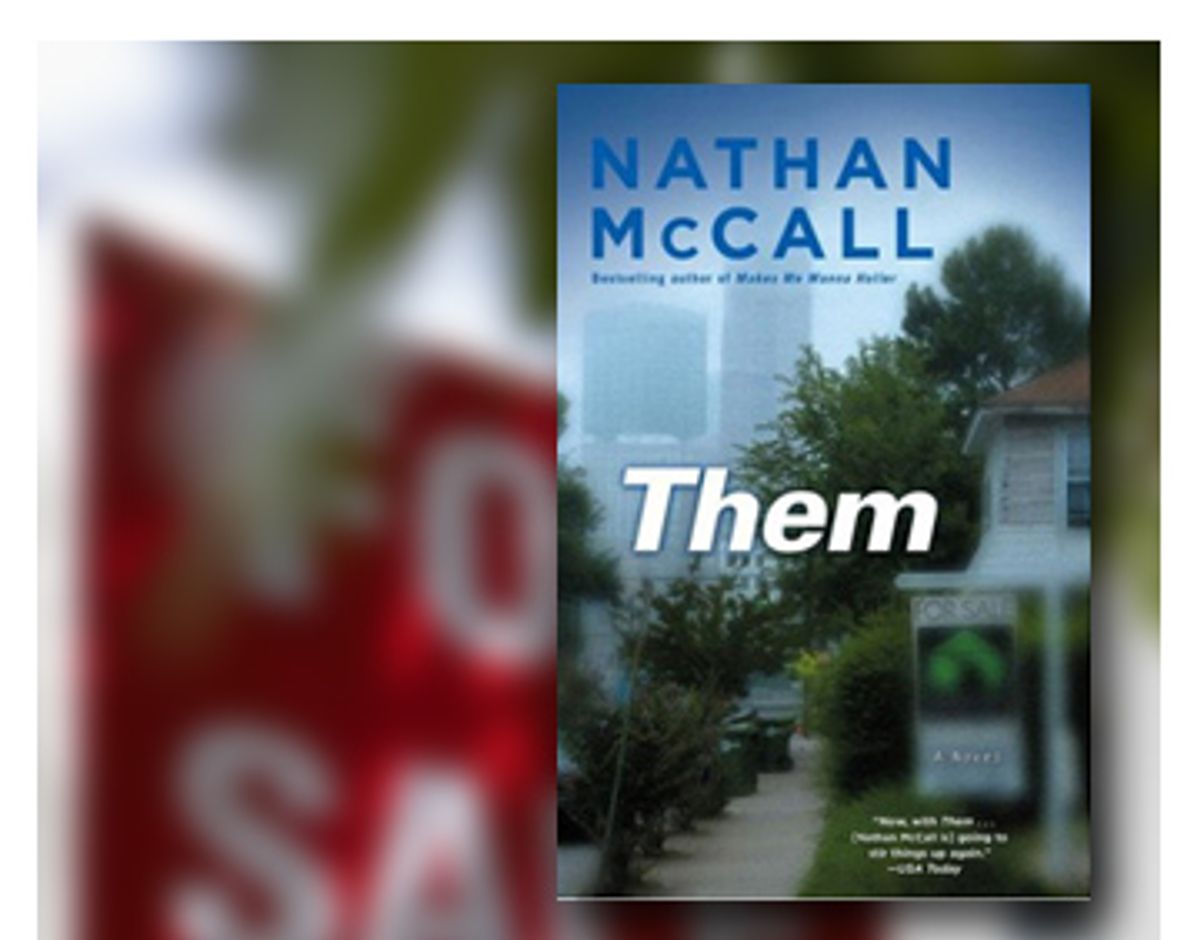 Midway through Nathan McCall's first novel, "Them," there's a meeting of the Civic League in an Atlanta neighborhood. The residents are up in arms because the wrong kind of people are moving in, the kind, as a councilman addressing the group delicately puts it, "you could classify as 'other.'" One homeowner compares the newcomers to roaches, and talks of running them off her property with a butcher's knife. The crowd begins to rumble. Racist epithets get tossed around. Then Barlowe Reed, the novel's protagonist, stands up and protests, "This feels a little bit like the kind of meetin they used to have to keep us out."

"Them" is a story of gentrification. To Barlowe and his longtime neighbors, "they" are the young white professionals buying the fixer-upper Queen Anne houses in Atlanta's Fourth Ward. For the whites, "they" consist of Barlowe and the other working-class blacks who have "counted themselves blessed to make frayed ends meet and avoid the sudden shadow of the repo man." The black residents don't appreciate seeing the corner Mini-Mart sold and transformed into a cafe staffed by multiply pierced weirdos selling fancy coffees. The whites don't see why the blacks don't want the streets cleaned up and those "spontaneous social gatherings" of drinking, card-playing, cussing black men moved indoors.

"Them," it must be said, is not an especially artful novel. McCall's prose is pedestrian at best and most of the characters (especially the white ones) are broadly drawn. McCall -- whose memoir, "Makes Me Wanna Holler," describes his climb from a youth of gangs and prison to a career as a journalist -- has worked at such newspapers as the Atlanta Journal-Constitution and the Washington Post. Those experiences have left their mark on his style in the form of clichés and on-the-nose exposition, but "Them" is so frank, so devoid of phony uplift and so animated by semi-reportorial urgency that most readers, I suspect, will forgive it for not being better written.

Besides, the novel does have one magnificent character, Barlowe himself, a former farm boy who turned autodidact after getting kicked out of school for refusing to parrot the party line on "Christopher" (Columbus, presumably). Just turning 40 at the book's beginning, Barlowe has a good job in a printing plant, where his boss carefully conceals from him the true value of his skills. He rents a shabby house in the Fourth Ward, sharing with his nephew, Tyrone, a parolee whose main concerns, as he puts it, are to "stay outta jail, keep a l'il money in my pocket and git a l'il pussy ever now and then." Tyrone can't understand why his uncle insists on brooding over "that black shit," or why he has suddenly taken the notion into his head to buy their house from its white owner.

We first meet Barlowe in the post office on the night of April 15. He's put off sending in his taxes until the last moment, and when he objects to buying stamps printed with the American flag, he gets into a fracas and spends the weekend in jail. That's a prime example of Barlowe's sullen and mostly futile rebellion against the institutional power he calls "Caesar." McCall's hero is fundamentally a good man, but he has an unpredictable temper and seemingly no capacity to look out for his own best interests. Barlowe's girlfriend, a hot number with big dreams, bails him out, then dumps him. He starts to wonder if it's not time to grow up a little, and put down some roots.

For the rest of the novel, Barlowe tries to scratch together the down payment for the house (although it's poignantly obvious to the reader that the owner will renege on his promise to sell it cheap) and to find a new woman. He's too impetuous for the pretty, genteel professional he meets through the Civic League, and the librarian who helps him pick out new books every Friday strikes him as "one of those drab and dreary people who play life by the numbers." Meanwhile, no one in the Fourth Ward could be less enchanted with his new neighbors than Barlowe. He barely acknowledges the existence of Sandy and Sean Gilmore when they move in next door.

Eventually, however, the persistent Sandy manages to forge a (very) tentative friendship with Barlowe as the two neighbors work in their backyards. He regards her as "a silly white girl lookin for somethin interestin to do" and she reproaches him for his inability see "the good in others," but he grudgingly gives her credit for trying. And, eventually, Barlowe becomes unsettled by his black neighbors' response to the newcomers. That Civic League meeting isn't the only bizarre echo of a supposedly distant past; someone sets fire to the Gilmore's mailbox, and the burning post looks disturbingly like a cross.

Although Sandy is a bit improbable (her naive views on race don't jibe with her supposed past as a campus radical), the awkward, stumbling, thwarted conversations between these two characters perfectly capture the vast gulf that can exist between two Americans who think they're talking about the same thing. Even McCall eventually gets fed up with Barlowe's inability to express himself (and Sandy's incapacity to understand), and imagines that, if able, his hero might have said, "Between two people with perceptions shaped by realities as alien as ours, some things really are inscrutable; one person's truths can transcend another's language, rendering them utterly incapable of seeing eye to eye." But Barlowe just can't communicate this to Sandy, who keeps on gamely insisting that "people are people."

McCall's refusal to conclude his book with a band-aid paean to the healing power of friendship makes "Them" an exceptionally bracing addition to American novels about race. However inelegantly mounted, this story feels scrupulously honest, and it really does conjure a double vision of the Fourth Ward. What looks threatening to the whites is, to the blacks, completely familiar and comforting. As one character puts it, "We have always viewed our neighborhood as a ragtag human stew of many parts: part comical, part sad, part noble, wit some crumbs of riffraff sprinkled in. But now we know better, thanks to you: Now we know -- dis place is a hopeless den of iniquity, a death trap. Now we know: Upstandin people should fear fo they lives." Barlowe may have been unable to get even one white person to see how life looks from his perspective. His creator, however, should succeed with thousands.