The Smart car is coming

Sure, the tiny autos are perfectly suited for the narrow lanes of Paris and Rome. But here in the land of freeways and monster SUVs, are we ready to downsize so far? 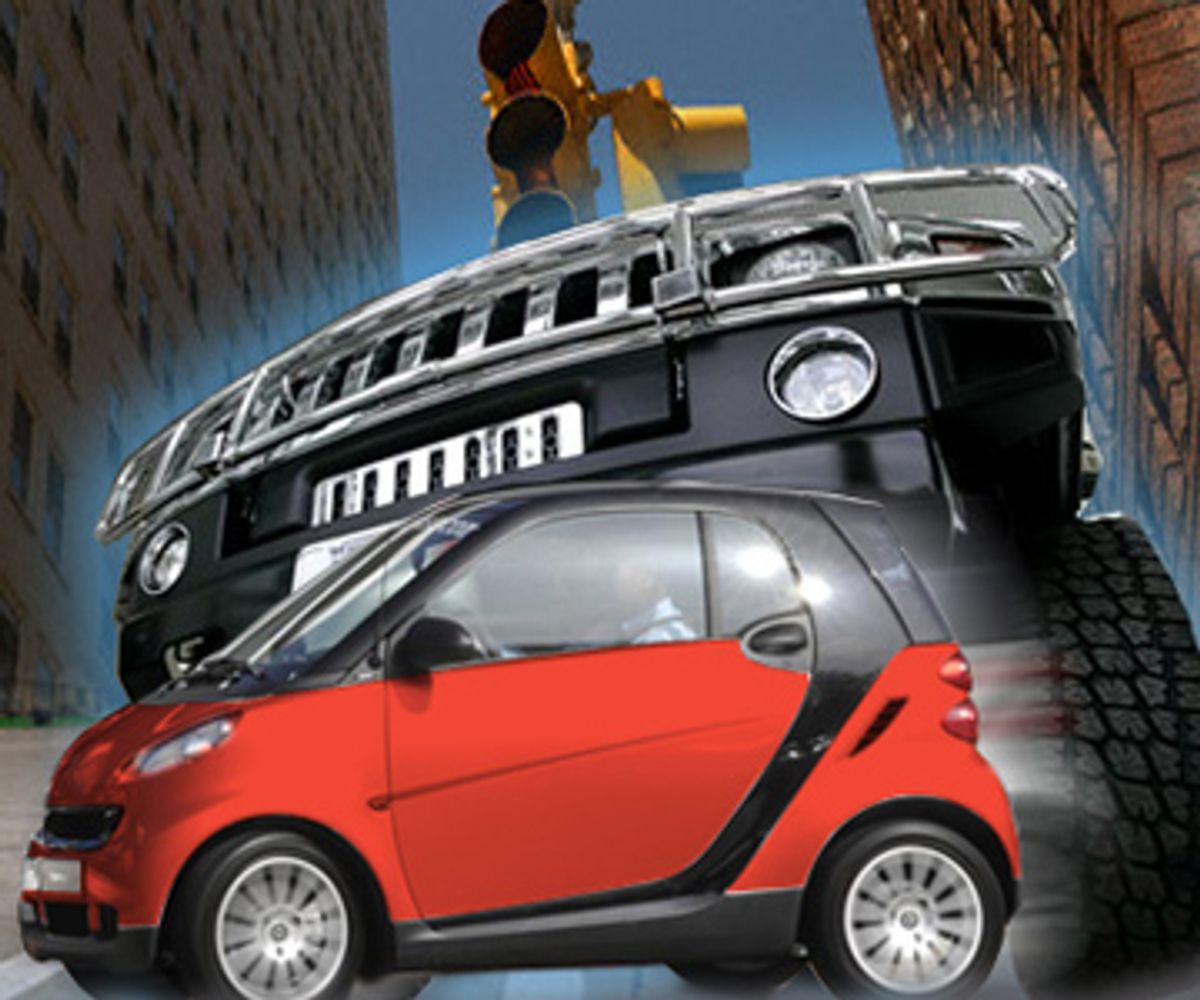 Everything's bigger in Texas, including, surprisingly, the interest in the itsy-bitsy car known as the Smart. In January, the miniature two-seat cars that dot the narrow lanes of Europe will make their way across the Atlantic and go on sale at 70 dealerships across America. For the past seven months, the Smart, which is made by Mercedes, has been embarked on a 50-city road show, offering test drives, photo ops and hype worthy of a monster-truck rally.

On a bright Saturday morning, a fleet of the tiny cars is on display at Mockingbird Station, one of Dallas' prefab entertainment and lifestyle complexes, thick with restaurants, movie theaters, stores and lofts. More than 100 Texans are waiting to test-drive the Smart model called Fortwo, whose price starts at $11,600. Many wannabe drivers are armed with cameras, as if they're here hoping to catch a glimpse of an exotic animal at the zoo.

Charlie Barnhardt, a big, bald man in snakeskin cowboy boots and a hunting cameo shirt with birds on it, drove an hour and a half from Greenville in his Jeep Grand Cherokee to see the Smart. Barnhardt, who runs a welding shop and hopes soon to retire, gives this verdict. "They're cute," he chuckles with a sweet smile. "I think it would go over good" in Texas.

Here in the land of the big pickup, the cuteness factor is turning a lot of heads for the smallest-horsepower vehicle offered by a major automaker. Irene Zeilan, a 40-something redhead, commutes five miles to her job at Texas Instruments in a 1988 Ford Bronco. But she recently bought a house in the burbs and will soon be making a 25-mile slog to work. So she's planning to shrink her ride and is thrilled by the microcars. "The time is right for this kind of car here," she says.

That's Mercedes' thinking, too. For years, the Smart car has roamed the roads of France, Italy and Germany, as well as Malaysia, South Africa and Canada -- 36 countries in all. Now the German automaker believes rising gas prices have propelled American drivers into recovery from their SUV binge. It believes we're finally ready to downsize -- way, way down.

But still there's something about the Smart car that seems to contradict the American way of life. We are a frontier country of wide-open spaces and eight-lane freeways. Want to go green? Sure, as long as it's with a 6,000-square-foot mansion with solar panels and a hybrid SUV. Besides, we're not Europeans. We don't drive cars that resemble toy poodles. We know all about the geopolitical crises of oil and the environmental fallout of all those carbon-dioxide emissions and exhaust fumes, but we demand a lot of metal and horsepower to keep us feeling safe and secure.

After all, the SUV craze was fueled in large part by the feeling that big cars were safer, and despite being mightily debunked, those sentiments die hard. An early Car and Driver review of the Smart Fortwo pronounced it "scary," while suggesting that only coastal snobs trying to navigate the narrow streets and limited parking of cities like Boston and San Francisco would settle for something this small. "Just how many urban fashionistas are there?" the reviewer sniffed.

"Cars have gotten incrementally smaller, but this is a quantum leap smaller," says Philip Reed, senior consumer advice editor for Edmunds.com. The two-seater measures just 8.8 feet long -- a whopping total of 106 inches. It's 5.1 feet tall and wide. The Smart's often compared to a golf cart, except with heated leather seats, a sunroof and a nice stereo. Yet its truly diminutive size has inspired other admirers to liken it to a roller skate or a bowling shoe. "For two people there's room," says Brandon Dye, executive editor of AutomotiveTrends.com. "It's not a torture cell by a long shot. But Americans are used to our big cars."

Fears about the Smart's being like a cue ball in an accident on a typical American freeway are its biggest drawback. Because it weighs a mere 1,800 pounds, some drivers will never overcome the horrific vision of a collision between a Smart and, say, a Toyota Land Cruiser, which clocks in at 5,700 pounds. "I like big trucks," says Pedro Caballero, checking out the Smarts in Dallas. Caballero owns a P.T. Cruiser, the smallest thing he has ever driven. "You're up so high. You feel safe."

"Many consumers equate size with safety," says Sean Comey, spokesman for the American Automobile Association. "And ultimately, the most important job that any vehicle will ever be called upon to perform is to save your life, and prevent you from being injured." However, he adds, "some smaller cars are engineered in such a way that they are in fact safer than big ones in many respects." In recent decades, auto experts have shown that it's not how much a car weighs that keeps its passengers safe. More important are a car's design and inclusion of safety features like air bags and anti-lock brakes, not to mention driver responsibility and skill.

The Smart Fortwo meets all American safety standards. The U.S. National Highway Traffic Safety Administration has not yet crash-tested it, but plans to do so in the first quarter of 2008. In the European Union, the crash testing body Euro NCAP gave the 2007 Smart Fortwo a four out of five stars safety rating. In fact, at 1,650 pounds, the European Smart Fortwo is somewhat lighter than the U.S. model.

Reed argues that the Smart's as safe as a small car can be. "The seats rise completely above your head, and they're made of extra-hard plastic," he says. "There are air bags everywhere." Passengers are also surrounded by what the company calls the "tridion safety cell," a kind of egg-shaped steel cage, designed to absorb the impact of bigger vehicles, which means practically every other car on the road.

Denise McCluggage, a columnist for AutoWeek magazine, who is a former race-car driver, says that size is also the car's advantage when you're behind the wheel. Not only does it slip into parking spaces that midsize sedans can only dream of, it allows you to maneuver through cars in clogged traffic. "It's almost like a motorcycle in that way," says McCluggage, who drove the Smart at the Frankfurt Auto Show this year. "You can really find places that no one else can go. It makes you feel so smug because that can mean the difference of half a block, so that means you make a light or don't. Over time, you just get through traffic faster." She hopes that crowded cities will designate places for Smart car parking, the way that they do bicycle parking, to encourage the cars' use to save space, money and fuel.

Throughout the U.S., small cars are indeed making a comeback, thanks to oil topping $96 a barrel and gas prices staying high, at least by American standards. In 2006, small cars made up about 15 percent of new cars sold, while in 2002 that figure was just 13.8 percent, according to the National Automobile Dealers Association. As of September 2007, 16 percent of cars sold were small, including the likes of the Honda Fit, Toyota Yaris, Nissan Versa, Chevrolet Aveo and Mini Cooper.

For some, the appeal of the Smart is owning a vehicle that doesn't seem wasteful. In Dallas, Sondra Dickson, taking photos of the Smart Fortwo using a huge black camera with a zoom lens, says: "They say Texas isn't going to like little cars, but we have a Mini and it's too big for us!" Although the Smart's official gas mileage hasn't been published, the company says the two-seater is designed to achieve an average of 40 miles per gallon. That's not so great for such a tiny car, but it's more than 10 miles per gallon better than the average American car.

Many auto industry observers expect the Smart to sell well in the U.S., especially at first when it has newness going for it. Over time, whether it's built well, reliable and performs consistently over time will make the difference in ongoing sales. In any case, environmentalists and patriots who want to break Americans' dependence on foreign oil shouldn't get too excited about the nation's fleet of mammoth gas guzzlers being replaced in a wave of zippy, little, fuel-efficient cuteness.

The typical American household simply owns more vehicles now, with drivers holding on to old vehicles instead of trading them in when they get new ones. "The trend is toward more vehicles per household, and has been for more than a decade," says Paul Taylor, chief economist for the NADA. The average is currently more than two cars per household, even though more and more households are headed by a single person.

"We're seeing an increasing tendency for families to have more cars than drivers," says Comey of the AAA. He believes that this phenomenon may skew some of the stats about the increase in smaller vehicle ownership, because buying a smaller car doesn't necessarily equal taking a bigger car off the road. As cars and trucks have gotten more reliable, their dependable life span has increased. Even paint has gotten tougher. So whether it's out of dismay for how little that old beater is worth when you try to trade it in or emotional attachment to a faithful four wheels, Americans are keeping their older cars around longer. "It's like having your own family fleet. You might have one car that gets better gas mileage," says Comey.

While observers expect the Smart to sell to empty-nesters who don't need a back seat, and recent grads, who don't have kids and really can't afford a bigger car, they also imagine that many initial buyers will get a Smart as a little something extra. Some suggest that with its relatively low prices, the Smart Fortwo will be a convenient addition to the family fleet -- the third car, the weekend car, the fun car rather than a true substitute for another vehicle.

"It's priced low enough that it can be a novelty," says Reed from Edmunds. "You could already own two cars, and buy it as a novelty to run around town in, which is perhaps one of the best uses for it, in addition to -- I hate to say it -- a real car." After all, driving a big SUV or a minivan to the store for a gallon of milk can be frustrating, especially when you pull into a parking lot that is crowded with a lot of other big cars and trucks smooshed into conventional-size spaces. Why not just solve the problem the conventional American way by buying something new -- in this case another car for those trips around town?

At least one American automotive legend is sold on the Smart. That's Roger Penske, the famed race-car driver turned billionaire businessman, whose Penske Automotive Group will be distributing the cars in the United States. They'll be sold mainly at Mercedes dealerships, as well as at free-standing Smart USA dealerships. So far it appears America is ready to get Smart. More than 35,000 people have paid $99 for a refundable "reservation" to buy a Smart Fortwo.

With reporting by Andrea Grimes in Texas.