On the fake campaign trail

Hillary Clinton got busted for planting a question with an audience member in Iowa. But there's all kinds of hocus-pocus at "town hall" events. 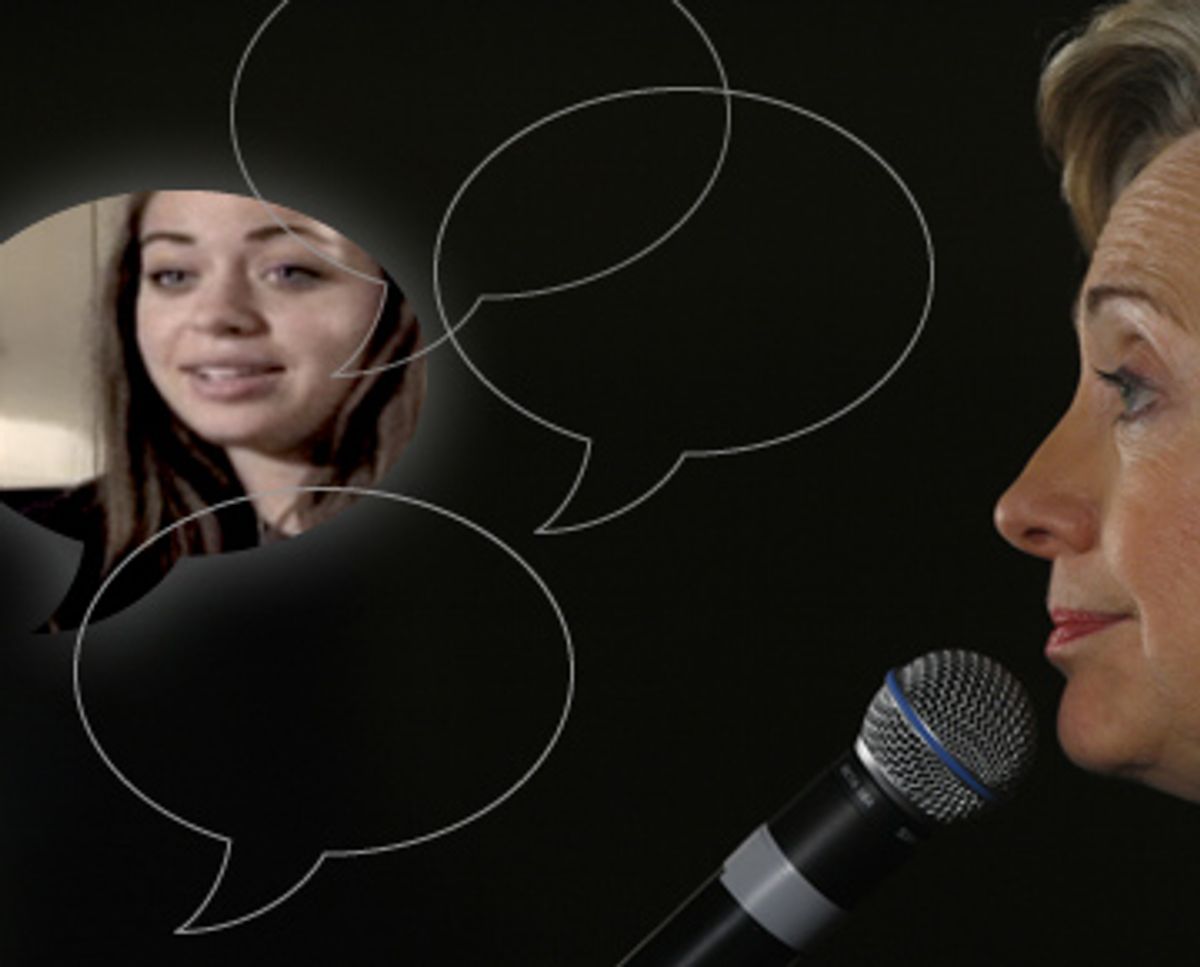 First, let us sing praise to the mythical town hall meeting -- that essential unit of American democracy, that gathering of citizen equals, that frank exchange of hopes and fears. Pharmacist Jill and farmhand Joe punch the clock and head on down to the high school gym, where they sit on folding chairs, shoulder to shoulder with the rest of the town. They meet their politicians as peers. They can ask anything, and every question is answered.

Now let us turn to what modern presidential politics has done to the "town hall meeting," a practice to be placed inside quotation marks because so much of what really happens there is, well, not actually "real." Last week, Hillary Clinton's campaign was forced to admit that her aide had planted a question about global warming with a college student at a "town hall" in Newton, Iowa. When she was later asked about this apostasy, Clinton gave a verbal shrug. "In campaigns, things happen and you just go on," she told the Associated Press.

What she didn't say is that every candidate and every reporter expects a regular share of the questions asked in these events to come from people planted in the audience -- puppets, stooges or well-meaning volunteers, some who act overtly and some who sneak through covertly. This ever-growing practice has come squarely into focus because of Clinton's blunder in Newton, adding to her campaign's reputation for producing the most meticulously staged events in the field. But her misstep points to a larger issue: the widespread manipulation of the classic "town hall."

If you attend enough campaign events, patterns begin to emerge. Representatives of the Priorities Campaign, a group founded by Ben Cohen of Ben & Jerry's fame, routinely ask about lowering military spending. Representatives of the New Voter's Project, an offshoot of the Public Interest Research Group, will ask about issues important to young people. The people from NORML, the pot legalization crowd, show up to ask about medical marijuana. Though the practice is not new this cycle, it appears to be more prevalent. "My sense is that more groups are trying to use New Hampshire as a megaphone for their own issues," says Dante Scala, one of the preeminent political scientists in the state.

Some candidates have even taken to making the bird doggers a central part of the "town hall" experience. Last month, Republican candidate John McCain all but stopped a meeting in Amherst, N.H., when he noticed a man in the audience with a T-shirt from the One Campaign, a group fronted by U2's Bono that works to eliminate global poverty. "It is my habit also to mention that there is an organization which shows up at these events," McCain said about 40 minutes into the meeting. "They are very nice people, and I always allow them to state why One is such a worthwhile organization." With that, he gave the bird dogger the stage for more than two minutes, a rapt audience at the ready.

In Iowa right now, a coal industry group called the Alliance for Better Energy Choices is running radio ads telling citizens to bird dog candidates about the wonders of coal, which environmental groups consider one of the dirtiest forms of energy. In the last three weeks, the group has already visited more than 30 campaign events in Iowa, according to a spokesman, often with a van wrapped with a picture of an extension cord plugged into a coal rock. "We'll have many questions for the candidates, and coal needs to be part of the discussion," says the disembodied radio pitchman, during station breaks. "Let's ask about coal."

So it goes. Last week, in Vinton, Iowa, Republican candidate Mike Huckabee had just finished his stump speech at a community college when an older gentleman rose to ask a question -- though he may not have written it himself. "You touched on energy," said the man, before asking why the nation doesn't better exploit its own coal reserves. "That would allow us to not be dependent on Saudi Arabia or any of these other guys. It seems that it is catching on."

A couple of questions later, Huckabee pointed at a person in the audience dressed in a snowman outfit. "Do I get to speak to the snowman?" he asked. The get-up was a gimmick of the League of Conservation Voters Education Fund, which has attended more than 300 campaign events in the early primary states to ask questions about global warming.

Sometimes, candidates try to expose the bird doggers. In the first week of October, Clinton was confronted by a hostile question in New Hampton, Iowa, about her vote to designate the Iranian Revolutionary Guard as a terrorist organization. Clinton promptly accused the questioner, Randall Rolph of nearby Nashua, of being a stooge. "What you read to me, that somebody obviously sent you," she said of the question.

"No ma'am, I take exception. This is my own research," Rolph objected. "Those are my words."

"Well then I apologize," Clinton responded. "It's just that I have been asked the very same question in three other places."

The irony of this exchange is now apparent. In the wake of the last week's planted-question-gate, the Clinton campaign has vowed to do away with binders that have questions written out for willing plants. As we now know, a 19-year-old sophomore at Grinnell College, Muriel Gallo-Chasanoff, was told by a Clinton staffer to ask, "As a young person, I'm worried about the long-term effects of global warming. How does your plan combat climate change?"

The Clinton campaign has since stated that "this is not standard policy and will not be repeated again," which can be interpreted to mean that at minimum the Clinton campaign will try to do a better job of not getting caught. But the "town hall" meeting will remain crowded with preplanned, prefabricated voices, presenting plenty of competition for pharmacist Jill and farmhand Joe, and potentially undermining this historic democratic institution.

Below, watch John McCain turn the mike over to someone from the One campaign: