While bird-watching is more popular than ever, competitive "listers" may not see how birds live, or that their habitat is disappearing. 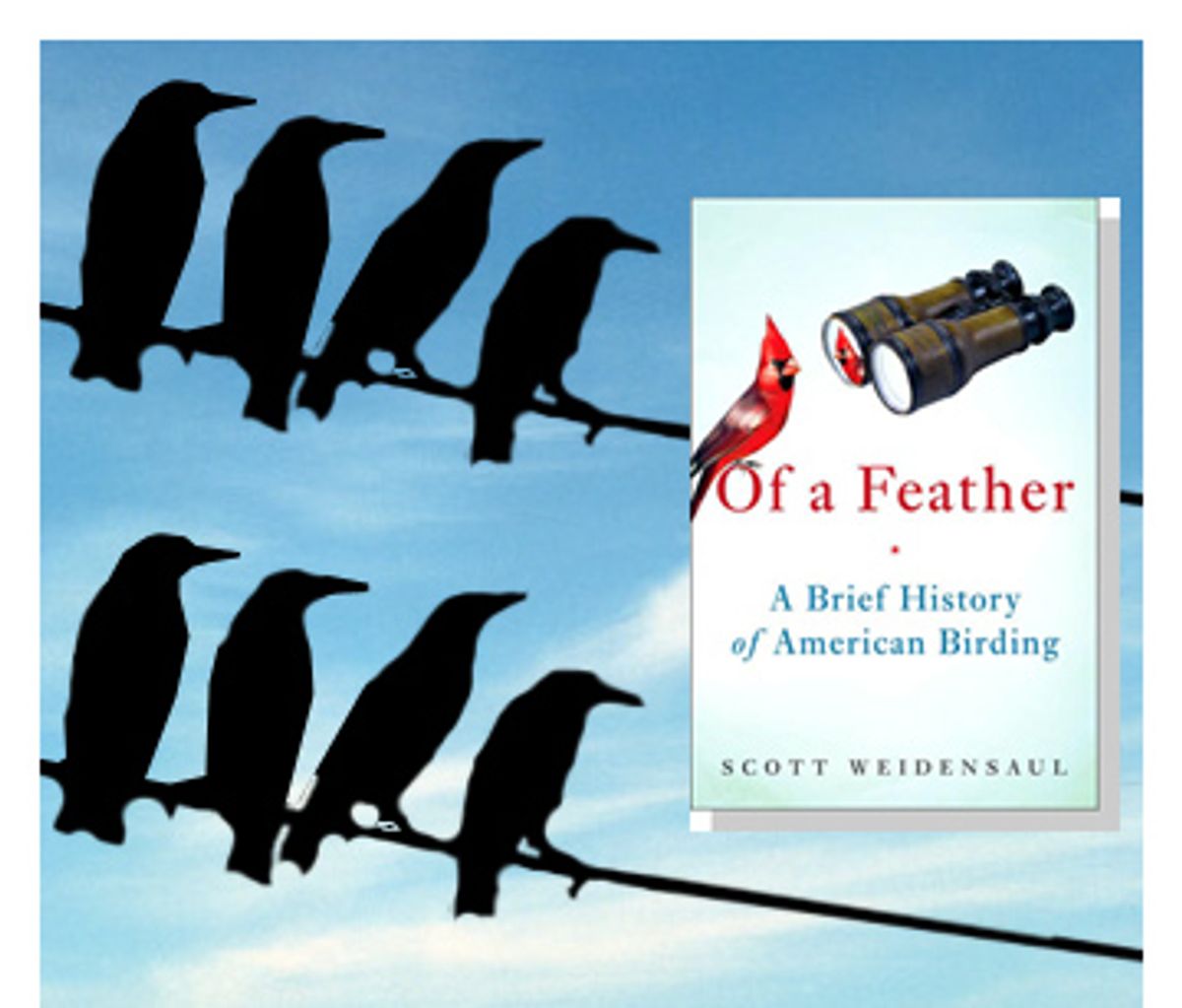 The love of bird-watching works a bit like a virus. Some contract it in early childhood, perhaps when nursing a downy chick back to health or when a grandmother points out a black-capped chickadee at the backyard bird feeder. Others catch it through contact with other birders, who tend to gaze off into the sky as you talk to them, mumbling something about wishing they had their binoculars. Either way, the epidemic is on the rise as more and more people get hooked on the simple pleasure of identifying and watching birds.

In "Of a Feather: A Brief History of American Birding," author Scott Weidensaul places birders in a long historical context, from our Founding Fathers to today, bringing the bird geeks from the fringe into the fold. Weidensaul, raptor expert and author of "Living on the Wind," the Pulitzer Prize-nominated book about migratory birds, paints a seamless narrative of the early Americas and the first men (and a few women) who discovered the unfamiliar bird life of North America as Europeans swept over the unknown territory of the continent.

The first part of the book reads like a gossip column, a deeply researched insider's scoop of the early characters who were "liars, drunks, slave-runners and scoundrels of every unfortunate stripe." A few of the names might be familiar; most won't be. They include Alexander Wilson and Billy Bartram, Thomas Nuttall and George Bird Grinnell, Graceanna Lewis and Florence Merriam Bailey, Elliott Coues and, of course, John James Audubon, born Jean Rabine in Haiti to a French sea captain and a chambermaid. Ooo-la-la.

With engaging prose, Weidensaul leads us into the obsessive world of early ornithology and the adventures and misadventures of its adherents in the New World. It was a time of conquering and christening the elements of the newly discovered land, a Garden of Eden that included birds never before spied by Caucasian eyes.

Often failures in every other endeavor they undertook, these early figures became fixated on the natural world, which sometimes drove them to extremes. Some abandoned their families; one shimmied up a tree to collect an egg, which he popped in his mouth, whole, and held there as he escaped on horseback from unfriendly Indians. One character leads us to the next, through chance encounters in Kentucky shops or friend-of-a-friend introductions, although a disproportionate number of these early people who found their focus on birds seem to be Philadelphia Quakers, making me think that the community was smaller than Weidensaul implies.

With the early interest in collecting and cataloging, ornithological art emerged as an integral part of identification and what would one day become the modern field guide. Each generation gave rise to a new format or artistic approach, sometimes through plagiarism with a twist, sometimes with a completely new style. Audubon, after much experimentation, finally discovered that if one impaled freshly shot birds, they could be positioned into dramatic poses, "as though the bird were patiently sitting for its portrait." The hefty limited-edition books of the early years, such as the series for Smithsonian at the turn of the century by Charles Bendire (the egg thief) and Cleveland Bent, were revolutionized in the mid-1900s by Roger Tory Peterson, whose name became synonymous with the pocket field guides he popularized.

The evolution of birding books continues today. Just seven years ago, a quiet man named David Sibley introduced an eponymous field guide with exquisite drawings that became an immediate hit among birders. Each of these advances built upon and improved the previous generation's portrayal of what is ultimately very complex biological and taxonomic information -- should the section on New World vultures be next to the section on hawks or storks? -- that gets to the essence of how we perceive the avian world around us.

Like the rest of America's growing population in the pioneer era, naturalists headed west after conquering the East, leaving behind a trail of newly identified birds (as well as mountains, mammals and more). They approached the new creatures they found with about as much respect for life as they showed the native human population. "The story of ornithology in the West through most of the nineteenth century," writes Weidensaul, "is largely one involving men on horseback with guns." Long before high-powered binoculars and the telephoto lens, years before the take-only-memories, leave-only-footprints ethos, the early birders were all about collecting -- and one collected by killing.

What harm could there be in the mass takings? It was a time of abundant bird life we can barely imagine today, with only a handful of wild characters pursuing an endless winged world. But by the approach of the 20th century, as more Americans became interested in birds, the avian numbers were dwindling. People were discovering that the Western Hemisphere was indeed finite, as airborne species like the passenger pigeon that once blackened the skies went extinct.

The decline seemed inevitable given, for example, that Christmas was traditionally celebrated with something called a Side Hunt in which holiday revelers entertained themselves by shooting anything that moved, mostly birds. Whichever team ended up with the biggest pile of carcasses won. It was fun for the whole family.

As an antidote to the indiscriminate slaughter, a man named Frank Chapman, a member of a young group called the Audubon Society, initiated an event called the Christmas Bird Count in 1900, channeling a nascent conservation consciousness into a contest to identify, but leave alive, as many birds as possible in a set period. Twenty-seven people participated that first year. The event now attracts 50,000 people in 2,000 locations.

Weidensaul cites national studies placing the number of contemporary birders at anywhere from 46 million to 68 million, but just a few months ago another report came out boosting that number to 81 million. "The story of bird study since World War II is the tale of how birding has become (well, almost) cool," Weidensaul writes. Still, I find, when I say I'm a birder, that most people respond with a perplexed, "You're a burger?" and look at me with either suspicion or bewilderment.

Unfortunately, while the number of bird lovers rises, many studies show that bird populations have continued to plummet in the last half-century. In addition to the near extinction of many birds of prey from the effects of DDT mid-century, many of which have rebounded successfully, populations of some of the most common birds -- eastern meadowlarks, rufous hummingbirds and whip-poor-wills, visitors that might show up in your backyard -- are down by as much as 80 percent. The common tern is becoming less and less common. The shift comes mainly from habitat loss, humans dominating and transforming the landscape the world over, altering everything from forests to farmlands to the very composition of the atmosphere we share.

Our natural world is disappearing, and with it myriad natural beings that once inhabited it in numbers too prodigious to count. What to make of Audubon's words? "When I was a youth, the woods stood unmolested here, looking wild and fresh as if just from the Creator's hands; but now hundreds of streets cross them, and thousands of houses and millions of diverse improvements occupy their places," he wrote. The year was 1836.

In "Of a Feather" Weidensaul writes, "I've harbored a growing unease and frustration at the disconnect between the burgeoning enthusiasm for birding and a pervasive apathy about the birds themselves, as organisms in their own right, whose protection and preservation should be among our highest priorities."

Weidensaul makes a strong case for conservation, flummoxed by the birders who don't see the connection between their avian beloved and the birds' need for a healthy habitat to survive. The ultimate example is the goal-oriented birder with a life list -- a master checklist of every bird he or she has ever seen -- who will spare no expense to see a rare bird, yet hardly take the time to appreciate it once found. The obsession takes over, with its origins in love and wonder lost along the way. They forget to look at the trees, the sky, the mess of shrubbery where they seek out their prey. They ignore the beauty of their specimen, alive and active in its natural environment, once the check mark is made.

As he enters the current era of birding, Weidensaul writes gracefully and tactfully about many of his colleagues and friends, people who are committed to identification in all its minutiae, but who also want to help bring the enjoyment of birding to more people, as opposed to just the specialized (and often elite) few. He writes excitedly, for example, about Kenn Kaufman's upcoming field guide in Spanish, the white, Anglo world of avian appreciation finally opening its gates.

At times the book's neat structure deteriorates as Weidensaul attempts to cover a wide stretch of ground -- from the evolution of bird identification by their calls to the progression of knowledge about pelagic seabirds -- that ends up seeming as if he's collecting all the scraps that didn't fit elsewhere.

But his passion and his love of the avian world are apparent on every page of the book. Birds are everywhere, and as soon as you notice just one, really notice it -- when it builds a nest outside your window, or if you happen to see one fluff its wings out and vibrate them tantalizingly at another nearby bird -- you may be heading down the road of the birding life. Weidensaul both opens and closes "Of a Feather," very deliberately, with stories of sharing the experience of birding with children and teenagers, one with her hair dyed orange and pink. Like evolution in the natural world, birders as a species are also adapting.