What you missed while watching "Project Runway" 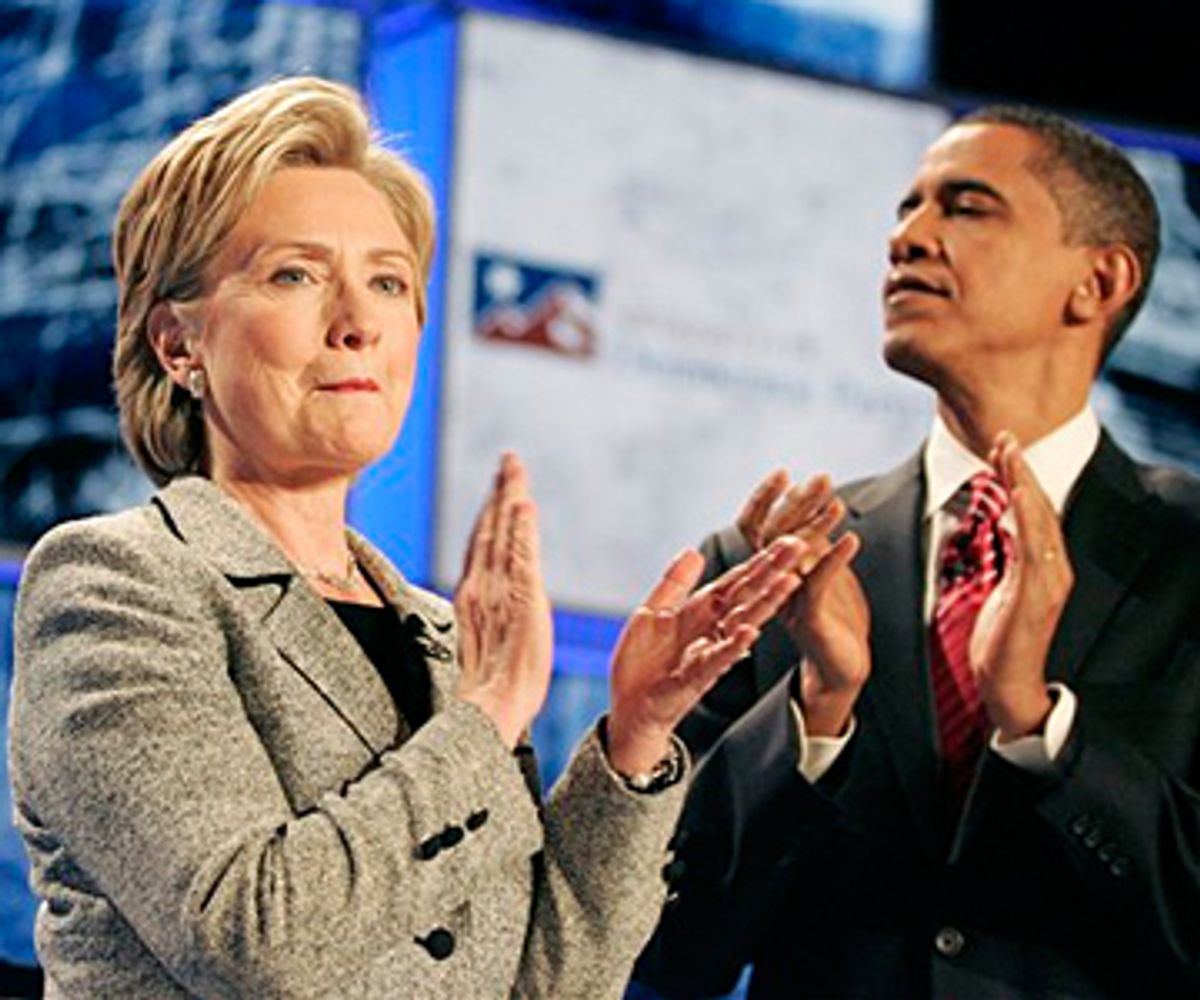 0 minutes. This is Vegas, baby, the real Sin City, the mob's 'ol desert mirage, where A-bomb tests once lit the horizon and the slots never stopped. Here America's id is represented as real estate, a long strip of unspeakable acts, worn faces and flashing lights. Everything has its price. And tonight, on a lonely stage, the Democratic primary slate will appear -- Hillary and the six bully boys. Are you ready? CNN's Wolf Blitzer, the debate's host, can't contain himself. "Welcome to the Cox pavilion," he says, in his boring voice. "We're at the University of Nevada."

1 minute. Not only has the host already killed the mood, but he also forgot to bring the candidates. The stage is empty. The Blitz explains that this is CNN's idea. He wants to show America what a photo op looks like. He says this seriously. "We thought, You know what? We're going to bring that to you as well tonight," says the Blitz. So one by one, he brings out the candidates. Illinois Sen. Barack Obama has a little strut. New York Sen. Hillary Clinton is dressed in a tweed coat the color of television static. Delaware Sen. Joe Biden trots.

2 to 6 minutes. A photo op happens. While the candidates pose onstage, the Blitz blows hot air with some of his correspondents about what America can expect -- if the debate ever begins. On average, less than 1 percent of Americans watch these things. Now we know why.

7 minutes. Finally, the debate begins. Clinton is asked why she was so lame during the last debate. Does she represent "the politics of parsing," as one of her opponents charges? Clinton is expecting this. She pulls out a wardrobe joke. "This pantsuit," she says about the static tweed. "It's asbestos tonight." The laughter allows Clinton to duck the question.

8 minutes. Obama gets things started. "What the American people are looking for right now is straight answers to tough questions," he says, "and that is not what we've seen out of Senator Clinton on a host of issues." He mentions her positions on Social Security and driver's licenses for illegal immigrants. "We need a different kind of politics," he says.

10 minutes. Before any applause, the Blitz turns back to Clinton, who unleashes on Obama. "When it came time to step up and decide whether or not he would support universal healthcare coverage, he chose not to do that," she says. "His plan would leave 15 million Americans out." The CNN cameras do a cutaway shot of Obama, who is standing to her left, about a foot taller and glaring down. "You know, we can have a different politics," Clinton continues, "but let's not forget here that the people who we're against are not going to be giving up without a fight." She gets applause.

11 minutes. Obama tries to explain why his plan does not mandate universal coverage. Then Clinton rebuts. But in this format neither is making much sense. The issue is too complex. In the meantime, a heckler has started shouting something from the cheap seats. Obama is flustered. "Please," says the Blitz. The protester keeps shouting. This is Vegas, baby. Vegas. The Blitz cannot prevail.

13 minutes. The Blitz can struggle for control. "All right," he says, before trying to change topics. But Ohio Rep. Dennis Kucinich has been emboldened by the heckler. "Wait," he calls. "The American people are entitled to a debate here." The Blitz can handle Kucinich. "I want Sen. Edwards to weigh in," he says. Kucinich goes quiet.

14 minutes. This allows former North Carolina Sen. John Edwards to let fly his own onslaught against Clinton. He hits all the points: her vagueness on Social Security, her support for continuing to keep combat troops in Iraq, her recent vote on declaring some Iranian forces as a terrorist group. "She says she will bring change to Washington, while she continues to defend a system that does not work, that is broken, that is rigged and is corrupt," says Edwards.

15 minutes. A cutaway shot shows Biden, standing at one end of the stage, staring at his podium and shaking his head in exasperation. Clinton is speaking now, accusing Edwards of acting like a Republican stooge. "When somebody starts throwing mud, at least we can hope that it's both accurate and right out of the Republican playbook," she says.

16 minutes. The Blitz must have noticed Biden's pain. "I want Senator Biden to weigh in," says the host. "No, no, no," Biden explodes with sarcasm. "Don't do it, no! Don't make me speak!" But the Blitz insists. "I want you to," he says. "Go ahead." The crowd applauds, happy to have survived the Obama-Clinton-Heckler-Edwards smackdown.

17 minutes. Biden offers the most concise and eloquent explanation of his candidacy to date. "Let's get to it, folks. The American people don't give a darn about any of this stuff that's going on up here," he says. "This is not about experience. It's not about change. It's about action." He continues, "Who among us is going to be able to, on Day One, step in and end the war? Who among us understands what to do about Pakistan? Who among us is going to pick up the phone and immediately interface with Putin and lay off Georgia because Saakashvili is in real trouble? Who among us knows what they're doing? I have 35 years of experience."

19 minutes. Edwards tries to return to the war-on-Clinton, but the crowd has started to boo him. It's not clear if these are Clinton campaign plants, or just voices of sanity.

21 minutes. Connecticut Sen. Chris Dodd finally gets a chance to talk. He says everyone needs to decrease the intra-party rancor, but the main thing to notice is that his hair has been cut short. That puffy, Connecticut part is gone. It's almost spiky now, like he used gel or mousse. And from the back, the beginnings of a bald spot are visible.

24 minutes. The Blitz asks all the candidates if they will pledge to support the Democratic nominee, no matter what. Everyone agrees, except for Kucinich, who still looks pissed. "Only if they oppose war as an instrument of policy," Kucinich says. This is sort of a fortune-cookie answer, but Kucinich may be saying he won't support any of the other Democratic candidates, who all endorse the idea of using the military to pursue U.S. interests. The Blitz does not ask for clarification.

25 to 31 minutes. A conversation about immigration boils down to the Blitz's hypothetical question: If there is no comprehensive immigration reform, would you support driver's licenses for illegal immigrants? Edwards says no, but. Obama says yes, but. Dodd, Biden and Clinton say no, though Clinton previously said yes. Richardson says yes. And Kucinich just gets mad at Blitz all over again. "I take issue with your description of there being illegal immigrants," Kucinich says. "There aren't any illegal human beings." This is another fortune cookie that the Blitz does not want to open.

51 to 68 minutes. The candidates discuss the current military strategy in Iraq, various trade agreements and the problems of disposing of nuclear waste. At one point Obama accuses the Blitz of being a pessimist. "Well, I'm optimistic," the Blitz retorts, though his inflection hardly registers a change.

69 minutes. Clinton is asked about the gender card, which critics say she played after the last debate, when she talked about taking on the "boys club." Clinton denies that she is playing that card. "I'm just trying to play the winning card," she says, which is funny because this is Vegas. Then she delivers the best applause line of the night: " I understand, very well, that people are not attacking me because I'm a woman; they're attacking me because I'm ahead."

72 minutes. Edwards begins going after Clinton again, charging that she takes money from lobbyists and represents "corporate Democrats." It's pretty predictable stuff, but some in the crowd start booing again. This is suspicious. The possibility of noisy Clinton supporters disrupting the debate seems more and more likely. At some point, there should be an investigation.

80 minutes. From here on in, the questions primarily come from the audience. CNN's Suzanne Malveaux walks around with the mic, but her bright blue suit is the same color as the bright blue carpet, making her head look disembodied on the television. The first question goes to the mother of a veteran of the Iraq war. He is standing next to her, and gets a standing ovation. His name is Christopher Jackson, and he has served three tours in Iraq. He says, "Our troops need to come home now." His mother asks about stopping a war with Iran, prompting the candidates to begin attacking Clinton again for her vote to declare as terrorists some Iranian forces.

81 to 105 minutes. More questions follow. One question bashes CNN's Lou Dobbs for demonizing illegal immigrants, and the questioner speaks in Spanish, prompting Dodd to show off his Spanish skills. There is a question about racial profiling at airports, which prompts Edwards to try to explain his vote for the Patriot Act. There is a question about Social Security and Medicare, which causes Clinton to say "fiscal responsibility" several times. The candidates are sitting onstage, and when they talk they tend to stand. Sometimes they stand just to show that they are listening, or that they want to talk next. At one point, Obama accuses Clinton of acting like Rudy Giuliani and Mitt Romney.

108 minutes. Another commercial break. This one includes a teaser for an upcoming episode of Larry King: "Inside the Paranormal."

112 to 125 minutes. There should be a law that limits the length of these debates. Life is too short. The candidates can only memorize so many zingers and jokes. But the whole spectacle keeps going, like a bad dream. The candidates all say they want to protect Roe v. Wade, or at least the right to privacy, with their Supreme Court picks. Obama talks about working with Republicans. Biden mentions Bosnia. Richardson talks about adjusting Israel's 1967 borders to broker a peace deal with the Palestinians. Kucinich says, "A president has to be a healer."

126 minutes. The last question from the audience goes to Clinton. "Do you prefer diamonds or pearls?" Of course, everyone already knows Clinton's answer. "I want both," she says.

127 minutes. It's over. Finally. Over. "And that wraps up our debate tonight," says the Blitz. But don't worry. They are still in Vegas. There is a whole world out there. Real pleasure. Real fun. You never know. Even the Blitz might hit the tables.