"Proust Was a Neuroscientist"

Did novelist George Eliot anticipate the ability of the brain to grow new cells? Did chef Auguste Escoffier foretell the science of the palate? Jonah Lehrer thinks so. 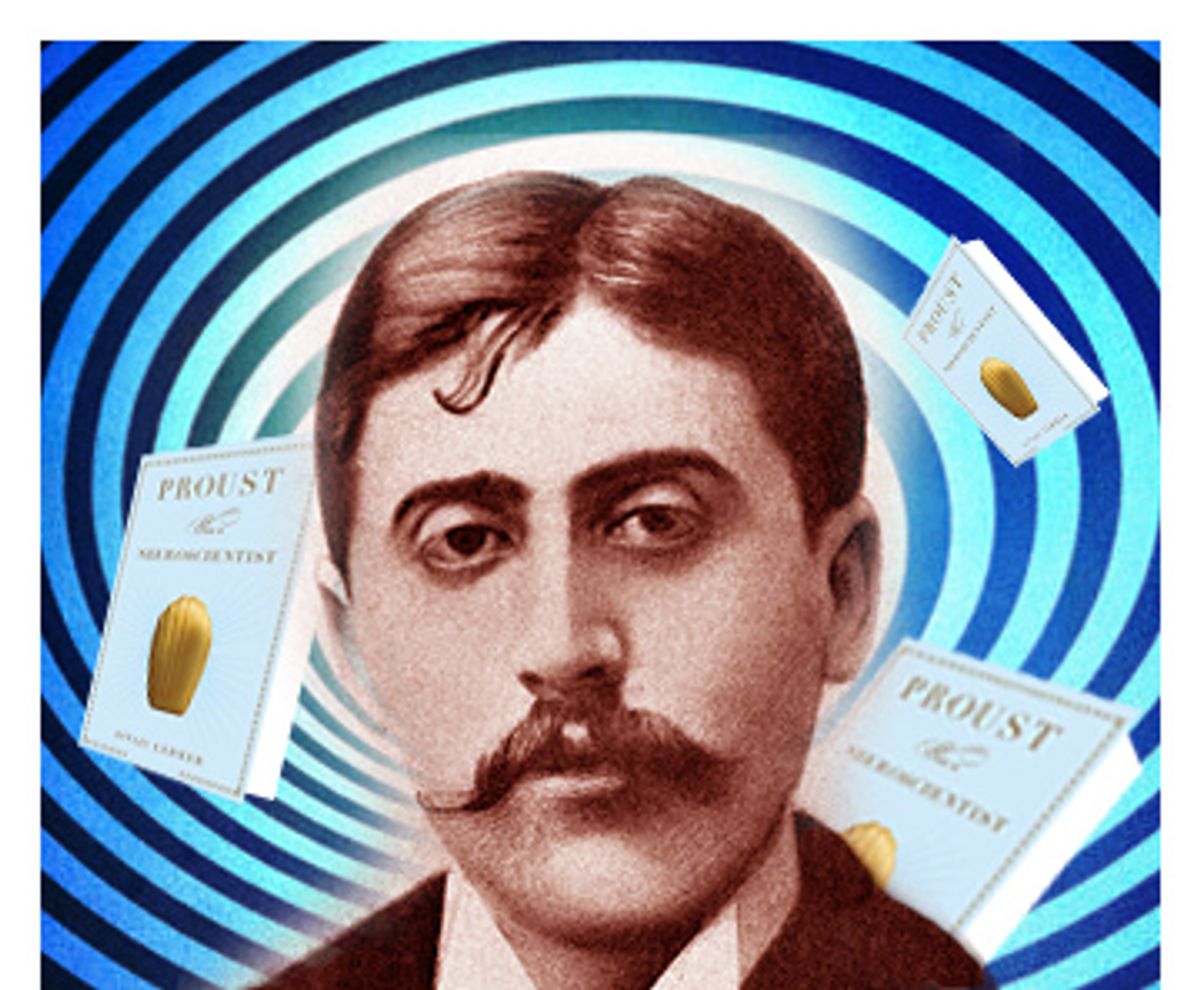 The world premiere of Igor Stravinsky's "Rite of Spring," by the Ballets Russes in 1913, featured shouting crowds in fancy dress, and a guest appearance by the French police. While none of that was choreographed, the mayhem was exactly what impresario Sergei Diaghilev sought, and affirmed Stravinsky's ambition to write music "of daring." Made famous by the uproar, "The Rite of Spring" entered the repertory, ever rising in popularity. By 1940, Walt Disney had scored it for "Fantasia."

Igor Stravinsky is one of eight major artists of the 19th and 20th centuries considered in "Proust Was a Neuroscientist," Jonah Lehrer's earnest attempt to vindicate the accomplishments of art by demonstrating how great composers and novelists and chefs of the past, from Marcel Proust to George Eliot to August Escoffier, anticipated recent scientific discoveries. "I have chosen them because their art proved to be the most accurate," Lehrer writes, "because they most explicitly anticipated our science." Lehrer's thesis would be indefensible even if his examples were convincing: Accuracy is no standard for art, which can fully justify its worth without recourse to peer review. As it stands, even the rationalist lens of science cannot support Lehrer's sophomoric project.

So why was Igor Stravinsky a neuroscientist? "Stravinsky's [musical] malevolence was rooted in a deep understanding of the mind," Lehrer writes. "He realized that the engine of music is conflict, not consonance. The art that makes us feel is the art that makes us hurt." This is a reasonable representation of Stravinsky's artistic strategy in "The Rite of Spring." The problems for Lehrer begin when he attempts to relate this to neuroplasticity, the ability of the brain to discover new patterns, and to be reshaped by them. "[O]ur ability to adapt to new kinds of music," he claims, "was Stravinsky's enduring insight ... Nothing is difficult forever." In fact, if one takes seriously Stravinsky's own stated goals, this shows the composer's misunderstanding of the mind, and marks the "Rite's" failure. As his music gradually surrendered difficulty to listeners' neuroplasticity, it progressively lost its audacity, and, to the extent that daring was its purpose, its effectiveness. Stravinsky specifically sought to thwart such complacency. "To listen is an effort," he claimed, "and just to hear is no merit. A duck hears also." Disney is about ducks.

Not all of Lehrer's artists are so far off-base, neuroscientifically speaking. Perhaps inspired by his job as a line cook at Le Cirque 2000 -- duly noted on the dust jacket together with his work in Nobelist Eric Kandel's neuroscience lab -- Lehrer has included a chapter on the redoubtable fin-de-siècle French chef Auguste Escoffier. Escoffier was a neuroscientist, according to Lehrer, because he invented veal stock. Veal stock is heavy in the amino acid L-glutamate, the basis of MSG, that notoriously savory seasoning that every Chinese restaurant in America denies using. "[Escoffier's] genius was in getting as much L-glutamate on the plate as possible," Lehrer writes. His cooking anticipated synthetics later scientifically shown to be tasty.

The story of this chemical discovery is not without interest. Since ancient times, the tongue was considered sensitive to only four basic flavors -- sweet, sour, salty, bitter -- none of which seemed especially present in appetizing victuals such as veal stock and Japanese dashi. This puzzle inspired a lifetime of research by the 20th century chemist Kikunae Ikeda, who ultimately established a place on the tongue for a fifth flavor, umami, and showed that this was the flavor of L-glutamate, the major amino acid from which our bodies are built. "The tongue loves what the body needs," Lehrer writes. And how does this pertain to Escoffier? "The culture of the kitchen articulated a biological truth of the tongue long before science did because it was forced to feed us," argues Lehrer. "For the ambitious Escoffier, the tongue was a practical problem, and understanding how it worked was a necessary part of creating delicious dishes." Lehrer's point is perfectly valid, but utterly meaningless. Like many cooks before him, Escoffier worked out appealing recipes. Science later determined how they appeal to us (in terms of sensory biology) and proposed, somewhat less convincingly, why they must (by way of evolutionary determinism). To call Escoffier a neuroscientist makes as much sense as to say that anyone who ever encountered an apple falling from a tree anticipated Newtonian gravity.

Lehrer's ponderings about Escoffier are trivial. His writings about novelists including Proust, Virginia Woolf and George Eliot are disastrous. His treatment of Eliot serves an apt example, since he credits her with anticipating an especially surprising discovery about the brain: neurogenesis, or the ability to grow new neurons. Like the dogma of four flavors, the belief that the mature brain is cellularly complete was long taken for granted, only to be refuted by a scientist working at the margins of her discipline. In this case, the heroine was a postdoc named Elizabeth Gould, who observed rat brains healing themselves. Following years of diligent experimentation, Lehrer writes in his boilerplate Horatio Alger prose, "[t]he textbooks were rewritten: the brain is constantly giving birth to itself." Which makes him think of Eliot's "Middlemarch," in which characters have the startling ability to develop, becoming, by the end of the book, different from who they were at the beginning. "[N]eurogenesis is evidence that we evolved to never stop evolving," Lehrer writes. "Eliot was right: to be alive is to be ceaselessly beginning."

Setting aside the fact that Eliot hardly needed to anticipate neurogenesis (or even neuroplasticity) to conjure characters changed by circumstances, the essential question arises: What is the good of saddling Eliot with neuroscience? Lehrer's reductionist reading of "Middlemarch" strips it of any interest as literature, and denies the value to be found in any work that doesn't operate as an exemplar of neurogenesis, such as fatalistic "Oedipus Rex." Lehrer claims affinity for literature, posing himself as a defender of the arts. He is fond of homilies such as, "our reality exists in plural." If illustration of scientific principles avant la lettre is the best defense to be had for the arts, the arts are better off dead.

Lehrer's book is worth discussing for this reason: It embodies an approach to the humanities and sciences that threatens the vitality of both. In his coda, Lehrer evokes C.P. Snow, whose 1959 book, "The Two Cultures," has become the standard reference in any discussion about the "mutual incomprehension" (as Snow phrased it) between these divergent realms. Snow famously proposed a third culture to fill this gap. Lehrer rightly believes that the scientific writings of Richard Dawkins and Brian Greene and Steven Pinker, which have sought to make science accessible to all, have addressed this divide without truly bridging it. He justly says that "[t]here is still no dialogue of equals ... [and that] there are many ways of describing reality, each of which is capable of generating truth." While often artful in their writing, Dawkins and Greene and Pinker show no interest in the arts as such. Theirs is a world understood totally through the scientific method, to the exclusion of literature and music and painting, except to the extent that the arts offer apt imagery, or provide ready-made examples of phenomena in need of scientific explanation.

To address this problem, and perhaps claim Snow's mantle, Lehrer proposes a fourth culture, one that will "ignore arbitrary intellectual boundaries, seeking to blur the lines that separate." As an example of this -- his only example -- Lehrer cites Ian McEwan's "Saturday," which has the merit of providing a neurosurgeon as narrator.

There is nothing wrong with McEwan, or with "Saturday," but by pointing to this novel as an ideal, Lehrer condemns us to a future resembling his revisionist past. Having spent 200 pages arbitrarily and often inaccurately illustrating the sciences with works by artists, he wants artists to become self-conscious illustrators in their own right.

Artists can learn from the sciences, as McEwan has done in researching neurosurgery, and as a latter-day Stravinsky could do by rigorously undermining neuroplasticity. Science is material for the arts and art is material for the sciences, yet each must maintain its own integrity. After all, each has its own virtue: The sciences lift us outside of experience, so that we can more clearly survey it. The arts immerse us in experience, so that we can more fully encounter it. The true third culture is to be found in an educated and interested public, able to embrace each endeavor on its own terms. Enslaving the arts to the sciences, as Lehrer wishes done, will merely diminish two cultures to one.