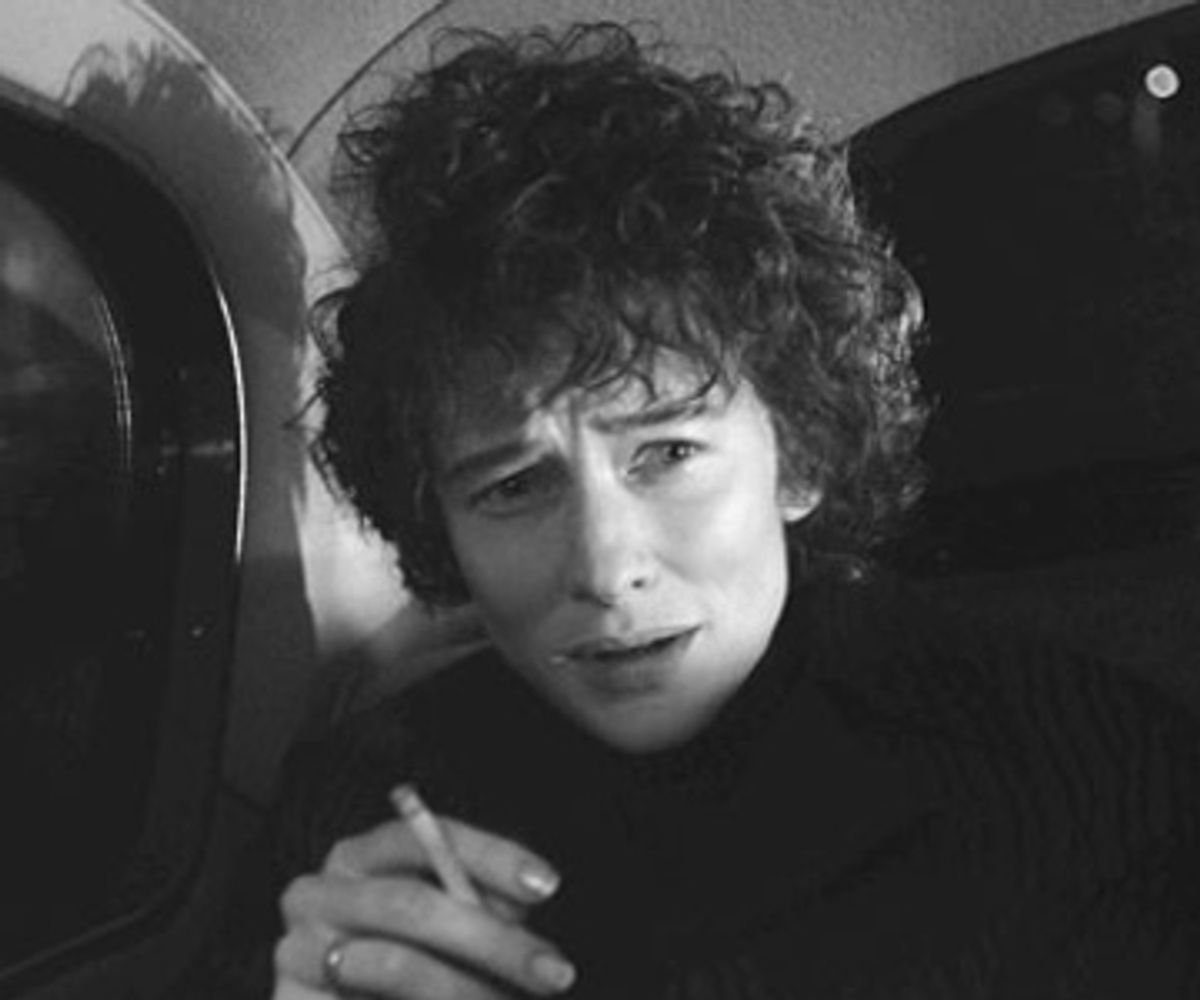 That's the question Jean-Pierre Léaud asked in Jean-Luc Godard's "Masculine Feminine," a question so essential it was unanswerable, even in 1966. Léaud, as the hero of a film about the insecure (and touching) adamancy of youth, didn't frame it as a question, anyway. It was a summons, a demand, something you might say to a specter who has inexplicably appeared in the middle of your room: Reveal yourself, now! Who are you, anyway?

"I'm Not There" is Todd Haynes' version of the question, framed not as a demand but as a ballad sung in the language of movies, as if the only way to get to the meaning of Dylan were through another type of song. This Dylan -- this idea of Dylan -- is, as the movie's opening tells us, "Poet, prophet, outlaw, fake, star of electricity," although he is perhaps more a place than a person, an elusive destination that we -- that is, those of us who love his music -- keep traveling toward.

"I'm Not There" is a kind of accompaniment for our boxcar journey, made by a fellow vagabond on the road. Haynes is a storyteller with music in his pockets. His 1987 "Superstar: The Karen Carpenter Story" used Barbie dolls to tell the story of the troubled singer; the picture is horrifying and deeply moving, and also nearly impossible to see. (Haynes didn't secure the rights to the music used in the film, and Richard Carpenter has barred it from ever being shown.) His 1998 "Velvet Goldmine" is an ardent and glorious reflection on the glam-rock era, a picture whose flaws frustrated me at the time, although nearly a decade later, I can barely remember what they were: All I can see now is its vitality, its glow. (That movie was also stymied by permissions problems: Haynes was unable to use any David Bowie songs.) "I'm Not There" is more complex and ambitious than either of those pictures, but it's so passionate, inclusive and joyous that there's no doubt it was made by the same guy. And this time, Haynes was able to secure permission to use the music: Dylan, through his management, granted the rights almost immediately, a fact that Haynes has recounted, with a sense of wonder and gratitude, in numerous interviews. (My own interview with Haynes can be read here.)

Because this is a biopic not of a man but of an idea, Haynes has cast six actors to bring it to life on-screen -- that's practically a Dylan for every day of the week, an embarrassment of riches that's manageable and luxurious at the same time. Not one of these Dylan personas is named Dylan: Haynes and his co-writer, Oren Moverman, have given them specific identities and shapes, each linked to an intangible something that we know -- or think we know -- about the "real" Dylan. Ben Whishaw (who starred in last year's "Perfume") is Arthur, the young, handsome, sharp-witted interlocutor who's dazzled by the legacy of the poets -- Rimbaud, et al. -- who have come before him. Christian Bale is Jack, an earnest poet of the people, a spokesman for the poor and the downtrodden. Marcus Carl Franklin is Woody, an 11-year-old black kid who lives on the road and who, like his namesake, totes his guitar in a case emblazoned with the words "This Machine Kills Fascists." Richard Gere is Billy, the outlaw who repeatedly eludes capture, but only by a hairbreadth. Heath Ledger is Robbie, not a singer but a movie star who rose to fame playing the lead in a movie about a Dylan-like singer, who has supposedly settled into a comfortable country life with his painter-wife, Claire (the superb, as always, Charlotte Gainsbourg), even though his real home, complete with numerous temporary girlfriends, is on the road. And, mightiest of all, is Cate Blanchett's Jude Quinn, a quivering, neurotic, sexually alluring elfin presence, a changeling, a bundle of receptors half-open to the world and half-guarded from it.

Each of these Dylans has his own story, and Haynes cuts those stories together in ways that make intuitive sense. Chronology isn't the point here. The picture has a dazzling, weblike structure -- its construction alone is seductively imaginative -- that feels whole and organic. When you get to the end, you know this is a story that's been spun, not mapped out on a storyboard. The editing here, a near-miraculous feat in itself, is by Jay Rabinowitz: Multiple narrative threads, involving any number of characters stretching across boundaries of place and time, overlap, break off and reconnect, often during the space of a single song. (Haynes has dedicated "I'm Not There" to Jim Lyons, his longtime editor, who died last April.) The look of the movie is as mercurial as its subject: Working with his frequent collaborator Edward Lachman, one of our most gifted contemporary cinematographers, Haynes gives us a movie that shifts from lustrous black-and-white to moody, somber color tones to dazzling countryside brightness. Haynes knows he's dealing with a life's work of words and music that demands multiple color palettes.

There's no way to outline the plot or movement of "I'm Not There": Every minute there's something to look at or listen to, an arrow pointing from "A" to "B" or perhaps to "P" or even "Y," and yet in the end, everything connects. We see bits and pieces of Dylan's life, and his work, come together with the clarity of a mosaic -- the sort of thing you have to step back from to see as a whole. Some scenes are faithful re-creations of footage we've seen elsewhere: We see Christian Bale, the picture of earnestness in work shirt and jeans, playing "The Lonesome Death of Hattie Carroll" before a group of SNCC workers and local residents, a fictional reflection of the real Dylan as we see him in a segment of Martin Scorsese's extraordinary documentary "No Direction Home: Bob Dylan." (The versions of the songs used in "I'm Not There" are mostly Dylan's, although the soundtrack album consists almost wholly of covers -- with the exception of the title track, which Dylan recorded with the Band as part of the Basement Tapes and which is only just now being officially released.)

Elsewhere, Haynes interprets events or moments in Dylan's career impressionistically: When Jude Quinn faces a group of hopeful, open faces at the "New England Jazz Festival" (the movie's winking nickname for Newport, 1965), his "assault" on the audience is turned into a brilliant visual joke. (Later, the camera scans the faces of the angry fans, including a placid-faced blond who says flatly, "I think he's evil," adding, "And we were his biggest fans.") Jude and his band then dig into "Maggie's Farm" as if they thought, by playing hard enough, they would come out through the other side of the world. In Haynes' vision, the performance says, "Here is where I'm going," pointing the way to an as-yet-unmapped future. "Come if you want."

Haynes summons the spirit of movies made by Godard, Fellini, Richard Lester, Sam Peckinpah; there's even a fleeting gag that's a nod to "The Graduate." Some of his references are direct and some are oblique, but they always brighten the picture instead of weighing it down. There are so many extraordinary performances here, each commanding a different segment of the movie, that leaving someone out is inevitable: Gere is a thoughtful, grave presence, the center of the movie's most enigmatic section (which, even though it's slow-moving, is integral to the picture), as the outlaw who defies the authorities that threaten to destroy an old West town with their greed. Franklin, the young actor who plays Woody, has some marvelous scenes, including one in which he recounts how he fell from grace and lost his way -- an impossibility for an 11-year-old, and yet as he reflects on his sorry past, we see him clutching a Leadbelly album, a suggestion of the way we sometimes live our lives through other people's music. Bruce Greenwood shows up in dual roles; in both, he's menacing, hostile toward everything Dylan stands for, and yet his blatant squareness is exactly what the artist needs to push against. Julianne Moore has the funniest bits, as Joan Baez-a-like Alice Fabian. Michelle Williams is the Edie Sedgwick stand-in Coco Rivington, a vision in two-tone blond hair (it's as black at the roots as her tights are), picking her way through a "forest" in a bell-shaped dress that turns her into an upside-down flower. She has only a few scenes, but she's a perfectly compressed vision of hipster cool and quivering vulnerability.

But Blanchett, in her drainpipe trousers, with that tousle of nerve-ending hair, is the heart of the movie. This is Dylan circa 1965-66, already stung by rejection but not yet ready to close himself off from his audience, or the world. Blanchett captures all of that: Her way of walking is a jittery amble; onstage, her movements have the precision, the meticulous grace, of a Balinese shadow puppet. Blanchett's Jude is almost always ready to make a wicked joke. He's defensive but also flirtatious, in a schoolyard kind of way. (Blanchett has a wonderful, tossed-off moment where Jude asks a pretty young journalist at a press conference for a light, and he compliments the lighter she proffers as if it were part of her anatomy.)

My favorite moment in "I'm Not There" is really just two shots connected by a genius cut: We see Jude walking, in slow-motion black-and-white, down a hallway, a solitary figure whose face -- just for that instant -- betrays everything he's trying to hold back from the world. The picture cuts to the countryside, the old West we'll see more of when Richard Gere's Billy the Kid rides into the movie; it opens momentarily into color the way Dorothy's Kansas-brown front door opens to the vibrant colors of Oz. Then it's back to Jude, in black-and-white.

That solitary figure -- extraordinarily beautiful, and so alone -- holds the essence of "I'm Not There," which takes its name from a song that is also, almost, "not there." Toward the end of the movie we hear that song, which Dylan recorded with the Band in the summer of 1967. Its half-finished lyric is impenetrable and exquisite. Dylan's delivery is garbled yet assertive, peppered with made-up words and seeming disconnections that ultimately shape themselves into a whole that's both elusive and achingly complete.

Until now, the song was a ghost itself, so rare it wasn't even included on the five-CD bootleg of the complete "Basement Tapes." It was passed around for years on bootleg tapes -- bootlegs being the late-20th-century version of troubadours, a way of preserving and sharing music that, not having been committed to the permanency of vinyl, seemed in danger of disappearing. But not even the advent of the digital age could demystify the song: A friend could e-mail it to you as an MP3, and it would arrive in your in box, a whispered secret. In the movie, Jude tells us, "A poem is like a naked person," and Haynes' movie is naked, too: Unclothed and resplendent, it stands before us like a question. Because no matter how much we analyze, dissect and discuss Dylan, he will always be a question, not an answer.