Who are those unmasked men? 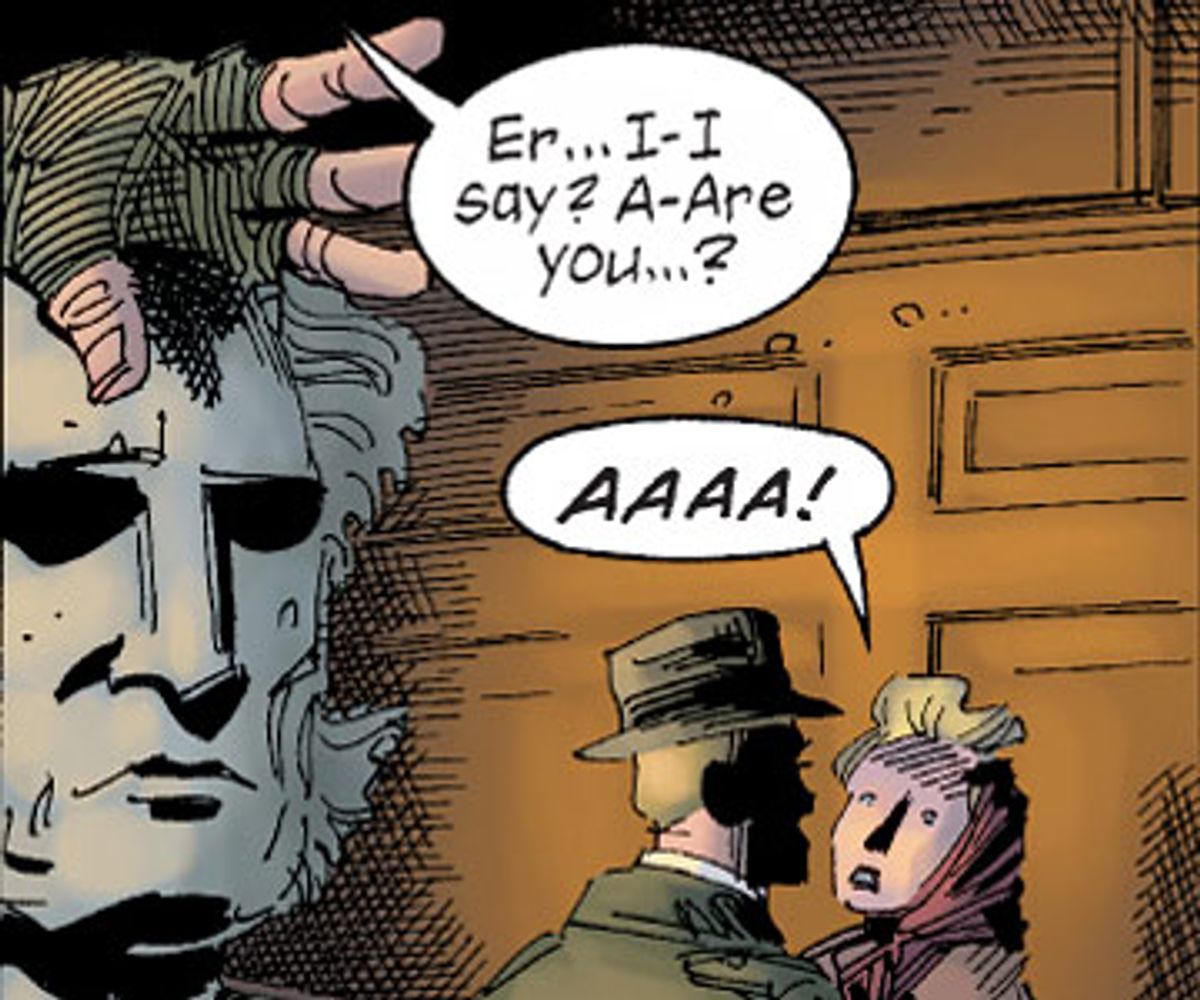 The third volume in his "League" series with artist Kevin O'Neill is indeed not Moore's best comic ever -- it doesn't have the emotional force or formal coherence of "Watchmen" or "Lost Girls" or "V for Vendetta," and it doesn't pretend to. But there's a certain kind of hyper-referential cleverness at which nobody else is even in Moore's, well, league -- a knitting together of other people's creations into a Grand Unified Theory of the cultural imagination -- and "Black Dossier" is the apotheosis of fan-fiction, a dumbfounding mash-up of pop culture and pulp entertainment.

The premise of the first two "League of Extraordinary Gentlemen" books (the first of which was made into an atrocious movie) was that, in 1898, England assembled a spy team from the era's pulp-literature characters: Mr. Hyde, Captain Nemo, the Invisible Man, Allan Quatermain and Mina Murray, better known as Mina Harker from "Dracula." In "Black Dossier," we jump ahead to 1958, when the team's two survivors, Murray and Quatermain, are still out adventuring together -- and particularly well-preserved, thanks to a 1901 encounter with a "pool of life." The book's plot is minimal: The two of them steal the titular dossier (a piecemeal account of the League's history from their 17th-century founding as Prospero's Men to a later group headed by Lemuel Gulliver and an early-1900s adventure involving the wicked Doctors Caligari and Rotwang), and escape with it in a rocket that will be familiar to fans of early-'60s children's television.

All the story is meant to be, though, is fruitcake batter, holding together one candied nugget after another. In the course of the book, we encounter, among other things, a brief prose piece in the merged styles of P.G. Wodehouse and H.P. Lovecraft ("What Ho, Gods of the Abyss"), a pornographic "Tijuana bible" aimed at citizens of Airstrip One from George Orwell's "Nineteen Eighty-Four," picture postcards from the fictional locales of Fantippo, Toyland and Coradine, and a biography of Virginia Woolf's Orlando (painted by O'Neill in the style of British "boys' comics"), who turns out to have also been Roland, the Mona Lisa, and Orlando the Marmalade Cat from Kathleen Hale's children's books. In places, it's as if Moore is pinning you down and demanding you admit how clever he is. (He is! He is! Uncle!)

The world of the League is pieced together from fragments of every kind of fiction. An essay on the supernatural foundations of England's history is credited not to Aleister Crowley, but to Oliver Haddo, his stand-in from W. Somerset Maugham's 1908 novel "The Magician"; the aerial bombardment of London was instigated not by Adolf Hitler but by Adenoid Hynkel, Charlie Chaplin's character from "The Great Dictator." This sort of concatenation of fictional sources isn't a new idea -- Philip José Farmer did something very similar in the early '70s with his "Wold Newton family" books -- but Moore's command of every piece of cheap entertainment ever committed to paper or film means that there's scarcely a panel of "Black Dossier" without some Googleable detail.

He's also a sure-handed parodist of literary style, whether he's approximating the tone of John Cleland's "Fanny Hill" ("In exquisitely suggestive ornamental gardens spread about the tunnel-mouth that let into this perfumed underworld itself, I paid my coachman, not in coin, though to my way of thinking very generously...") or Orwell's Newspeak ("Make report. If fail make report, is INFOCRIME. Make report. If report made on failing to make report, this paradox. Paradox is LOGICRIME. Do not do anything. Do not fail to do anything. This warn you"). And different sections of the "Dossier" are not just written but illustrated and designed and printed in widely divergent styles; sadly, the 45 RPM record rumored to be included doesn't show up in this edition.

The patchwork nature of the book also means that Kevin O'Neill gets to work overtime. O'Neill, who made his name drawing berserk, grotesque fantasies like "Marshal Law" and "Nemesis the Warlock," is the only artist ever to have his actual drawing style declared unsuitable for children by the Comics Code Authority (on the strength of a 1986 "Green Lantern Corps" story written by Moore); his line work gives everything he draws the crinkly mass of a crumpled piece of paper. "Black Dossier" calls on him to go beyond his usual lively sense of design and choreography, approximating the look and feel of 18th-century political caricature, Art Deco erotica, a tourist map, vintage magazine cartoons and a '50s pulp paperback cover (for a book by Sal Paradyse, whose name may ring a bell to anyone who's read "On the Road").

In short, "Black Dossier" is a thoroughly postmodern book, in the sense that it's entirely built out of allusions and associations -- preexisting bits of meaning. That raises the question of what meaning it has on its own, or whether its light is entirely reflected. As David Foster Wallace (riffing on a John Barth line about postmodern fiction) put it: "For whom, the proles grouse/ Is the funhouse a house?/ Who lives there, when push comes to shove?"

Moore does have something of an answer. The key line of the first "League of Extraordinary Gentlemen" book, reprised here, is "The British Empire has always encountered difficulty in distinguishing between its heroes and its monsters." (Somewhat surprisingly, that's Moore's own aperçu, not a quotation from somebody else.) The premise of the whole series is that pulp fiction and popular entertainment are the ways the deepest anxieties of culture bubble up into narrative: Nemo and Mr. Hyde and the invading Martians of "The War of the Worlds" exemplified Victorian England's fears about science, empire and "foreigners."

In 1958, the heroes of what remained of the British empire were spies, and on the first page of "Black Dossier" we meet a brutal, depraved secret agent identified only as "Jimmy," who asks for his vodka martini to be stirred: "otherwise it bruises the alcohol." (When he picks up Mina Murray at a bar, she tells him that her name is Odette "Oodles" O'Quim.) His boss, who goes by some initial or other near the middle of the alphabet, is Harry Lime from "The Third Man," and they're up to no good. There was something innately monstrous, Moore suggests, about 007 (with his limitless license for violence and sexual exploitation), and about the covert operatives and private eyes that fascinated mid-20th-century Britain: The book's other villains are Herman Cyril McNeile's jingoistic, two-fisted detective Bulldog Drummond (who appeared in a series of novels beginning in 1920) and a never-quite-named stand-in for "The Avengers"' Emma Peel.

Playing with other people's inventions in this way, of course, skirts the edges of copyright when you get past a certain date, and "Black Dossier" -- originally scheduled to be published a year ago -- is rumored to have been delayed by some legal glitches. But the biggest single source of allusions in this book is well out of copyright: William Shakespeare, by whom we get to read an excerpt of an "unknown" play, "Faerie's Fortunes Founded." "Black Dossier" proceeds, in part, from the premise that Shakespeare's queen and patron was Queen Gloriana, as in Edmund Spenser's "The Faerie Queen" -- so, by extension, "A Midsummer Night's Dream" and "The Tempest" were actually among Shakespeare's history plays.

In the concluding section of "Black Dossier," Prospero himself -- drawn to look very much like Moore -- turns to address his audience in blank verse. (This isn't the first Moore comic to be concluded by a stand-in for the author -- he first did it in his final "Swamp Thing" story, 20 years ago.) Tradition has it that Prospero's renunciation of his magic at the end of "The Tempest" represents Shakespeare bidding farewell to his art. So Moore, who's been making noises for a while about retiring from comics, is effectively snapping his wand, drowning his books and knocking a mountain over on top of the whole site.

As with Moore and J.H. Williams III's "Promethea" -- one of relatively few major Moore comics projects not directly inspired by someone else's work -- the farewell in "Black Dossier" is a paean to the power of the imagination. This one, though, is a bit more final. It begins "Duty necessitates I here abide, attending to such stragglers that remain, ignore their hosts' exaggerated yawns and, fearing party's end, scuff now their feet 'midst fallen streamers and spill'd goblet-dregs." In other words: We're done! Scram! Funnily enough, this isn't actually Moore and O'Neill's ultimate League story -- they've promised another volume, Century, to be serialized in three parts beginning next year. (This is, however, almost certainly the final book to be published by the Moore-created America's Best Comics imprint: The credit page, modeled on the London Underground map, includes the note "ABC: Closed for the duration.")

After that throat-clearing, Moore-as-Prospero gets to his point: Popular fiction doesn't just mirror its readers' reality, it inspires and creates it -- which makes it somehow more real than reality. "If we mere insubstantial fancies be," he asks, "how more so thee, who from us substance stole?" Blurring the line between the page and the reader's world further, the book's final section is printed in 3-D (to represent the characters' transition from the third dimension, where time is unidirectional, to a temporally boundless fourth dimension); in a last gesture of over-the-top cleverness, the enclosed 3-D glasses have a third eye. This isn't just Moore's kiss-off, it's his bid for immortality -- a realm that, one last time, he's trying to enter through other people's creations.