The Republicans who would've impeached Bush?

Not so long ago, members of Congress put the rule of law above partisan politics and loyalty to the White House. 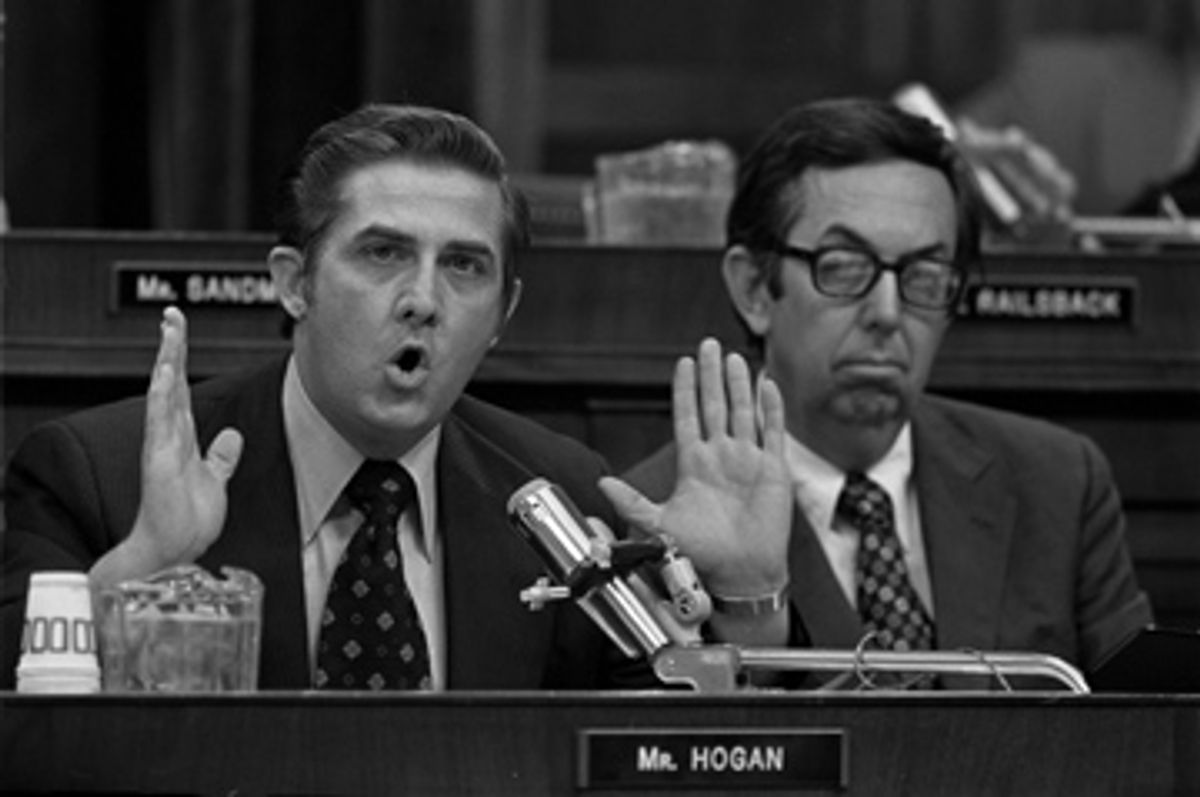 During the past six years, leading Republicans in Congress have prioritized allegiance to a Republican president above all other governmental and constitutional concerns. But there was a time when U.S. lawmakers, regardless of party affiliation, actually voted the way of their conscience. There was a time when a president could not break the law or ignore a summons from Congress with impunity. Indeed, by the height of Richard Nixon's Watergate scandal, a number of congressmen -- including Republicans staunchly loyal to their party -- acted to uphold the law and make Nixon accountable.

Today, the main concern of lawmakers seems to be the preservation of power and the entitlements that come with it. Republican allies of the White House have blocked congressional investigations into the Bush administration's alleged misdeeds, including illegal spying on Americans' phone calls. In 2006, the Senate Intelligence Committee, led by Pat Roberts, R-Kan., thwarted an investigation into warrantless eavesdropping by the National Security Agency. While serving as chairman of the Judiciary Committee prior to the Democratic takeover of Congress in 2006, Arlen Specter, R-Pa., though a vocal critic of the spying, failed to initiate any investigations into Bush's wiretapping program, despite ample evidence that it violated the existing FISA laws. Meanwhile, top Democrats, including Jay Rockefeller of West Virginia and Dianne Feinstein of California, have shown a willingness to cave into Bush's demands, including retroactive immunity for American telecom companies that assisted the government's spying.

The Bush era has drawn various comparisons with the Nixon era, but what seems forgotten from that time is the courage exhibited by a handful of lawmakers, once fiercely loyal to the president, who ultimately decided to impeach him. In recent interviews with Salon, some of those former congressmen spoke about their reasons for risking their political career and taking a principled stand, the kind that seems so unlikely on Capitol Hill today.

In the spring of 1974, allegations filled the airwaves that Nixon had misused the CIA and FBI and had spied on Democratic opponents. A summer of contentious televised deliberations, conducted by the House Judiciary Committee, resulted in a vote in favor of three articles of impeachment. After thoroughly examining the evidence, a handful of Republicans decided to break ranks with the party and vote with the majority. They were joined by two Democrats from conservative Southern districts who ignored pressure and even threats of violence from their Nixon-supporting constituencies to vote the way the facts demanded. (The release of an audiotape directly implicating Nixon in the Watergate burglary led to his resignation on Aug. 9, before the full House could vote on the impeachment.)

At the outset of the deliberations, Rep. Peter Rodino of New Jersey, the Democratic chairman of the 38-member committee, stated that "the law must deal fairly with everyone." But particularly for the Republicans from conservative districts, voting for impeachment meant not only going against their party, but also potentially angering their constituents and sacrificing their political career.

One them was M. Caldwell Butler of Virginia. In Nixon's 1972 landslide reelection, Butler's district had voted 73 percent in Nixon's favor. In an interview given for a 1984 PBS documentary titled "Summer of Judgment: The Impeachment Hearings," Butler said that when the Judiciary Committee began its deliberations, he was "still very defensive of the president." Yet, by the end of that summer, he became one of the decisive Republican votes that sealed Nixon's fate.

Behind his large, Coke-bottle glasses, Butler gave a rousing and emphatic speech to the committee that today seems both resonant and remote:

If we fail to impeach, we have condoned and left unpunished a course of conduct totally inconsistent with the reasonable expectations of the American people. We will have condoned a presidential course of conduct designed to interfere with and obstruct the very process he has sworn to uphold. We will have condoned and left unpunished an abuse of power totally without justification. In short, a power appears to have corrupted. It is a sad period in American history, but I cannot condone what I have heard, I cannot excuse it and I cannot and will not stand still for it.

Now 82, Butler told Salon in a recent interview that impeachment was "warranted because of the president's conduct." From his perspective, the impeachment was never a partisan issue. "I didn't have any problem separating the Republican problem," he said. "It was my first term in Congress, and I wasn't all that crazy about the job anyway ... I think it would have been a terrible thing if we had decided to vote strictly along party lines in the committee."

However, Butler did feel pressure from his constituency to vote against impeachment. "Everyone one of us Republicans and Southern Democrats were from areas that had strong Nixon support in the previous election, so we all felt in jeopardy."

Other Republicans who voted for articles of impeachment were Tom Railsback of Illinois, William Cohen of Maine, Harold Froehlich of Wisconsin, Lawrence Hogan of Maryland, Robert McClory of Illinois and Hamilton Fish of New York.

Railsback, now 75 and living in California, said in an interview that voting for impeachment was especially difficult for him because he considered Nixon a friend. But Railsback emphasized that despite this relationship, and despite his being a Republican, he made an independent decision. "I was never pressured directly by any of the White House people or the president or [White House chief of staff] Al Haig or John Mitchell or anybody else, nor was I pressured by the leadership of the Republican side of the House or Senate," Railsback said. "I did talk to George Herbert Walker Bush. [Bush was then chair of the Republican National Committee.] He and I are good friends, and he was interested in my opinion. I didn't tell him how I was going to vote or anything like that, but I let him know that I had some concerns."

Railsback says that his party affiliation only made him more resolute in seeking the truth. "Because I was a Republican, I felt an additional responsibility to get what I thought was an accurate view of the facts and the evidence," he said. "I just couldn't worry about [voting against a Republican president]. I felt that the best thing we could do was what we thought was right."

Like Butler, Railsback received considerable pressure from his conservative constituency to vote against impeachment. "There were some people in my district who were upset and we also had -- this was not in my district -- but we also had some bomb threats by mail that were being examined by the Postal Service prior to delivery," he said. "I think for us, particularly the Republicans, [the impeachment] wasn't something we were very happy about or wanted to celebrate," he added. "Looking back, I think all of us on the committee knew that what we were doing would likely be the most important legislative work that we would ever be required to do."

Democrats from conservative districts, James Mann of South Carolina and Walter Flowers of Alabama, also took a risky stand. Mann, whose district had voted 78 percent in favor of Nixon in 1974, became the most outspoken and influential of the Southern Democrats on the Judiciary Committee. During the committee proceedings, Mann addressed his colleagues in his distinct Southern drawl: "Are we so morally bankrupt that we would decide that the system that we have is incapable of sustaining a system of law because we are imperfect?" Mann worried about the precedent the committee would set if it ignored Nixon's assaults on the Constitution -- future presidents might use Nixon's example as justification for their own transgression of the law.

Mann developed Alzheimer's in 2000 and was unable to be interviewed for this article. But his son, James Mann Jr., who helped his father write the first and second articles of impeachment in 1974, recently explained his father's reasons for voting for Nixon's ouster. "He would not have gone against his convictions to get reelected, of that I'm certain, and everybody that knows him would say the same," said Mann Jr. "He felt strongly that the evidence was there." Mann Jr. explained that his father became convinced of Nixon's guilt only after plowing his way through volumes of evidence provided by John Doar, special counsel to the Judiciary Committee, who had conducted the committee's investigation. His father had not gone into the hearings already convinced of Nixon's guilt.

However, Rep. Mann's decision was a fraught one. "He heard from hundreds of people, including his own mother, that you just can't do this," said Mann Jr. During the televised Watergate hearings, he said, two U.S. marshals were stationed outside the Mann household in South Carolina at all times. His father received numerous death threats once it became clear that he was going to vote in favor of impeachment. "My mother stayed in the kitchen in the back of the house to watch TV, where she normally would have watched in the front of the house. And she tried to stay out of the view of the windows," he said. But his father "did not waver once he made his decision."

It should not seem far-fetched for a politician to put conscience before party loyalty or political prospects. As Butler and Railsback put it, and as Mann Jr. said about his father, they and the other lawmakers who held Nixon accountable were only doing their job. But it is hard not to label their efforts as heroic in light of today's inaction on Capitol Hill.

Near the close of the Watergate committee's proceedings, James Mann Sr. issued a prophetic statement. He said, "If there be no accountability, another president will feel free to do as he chooses, but the next time, there may be no watchmen in the night."