The sound of strangers

A hero with superhuman hearing sets out to rescue a silent child in Peter Hoeg's compelling new mystery. 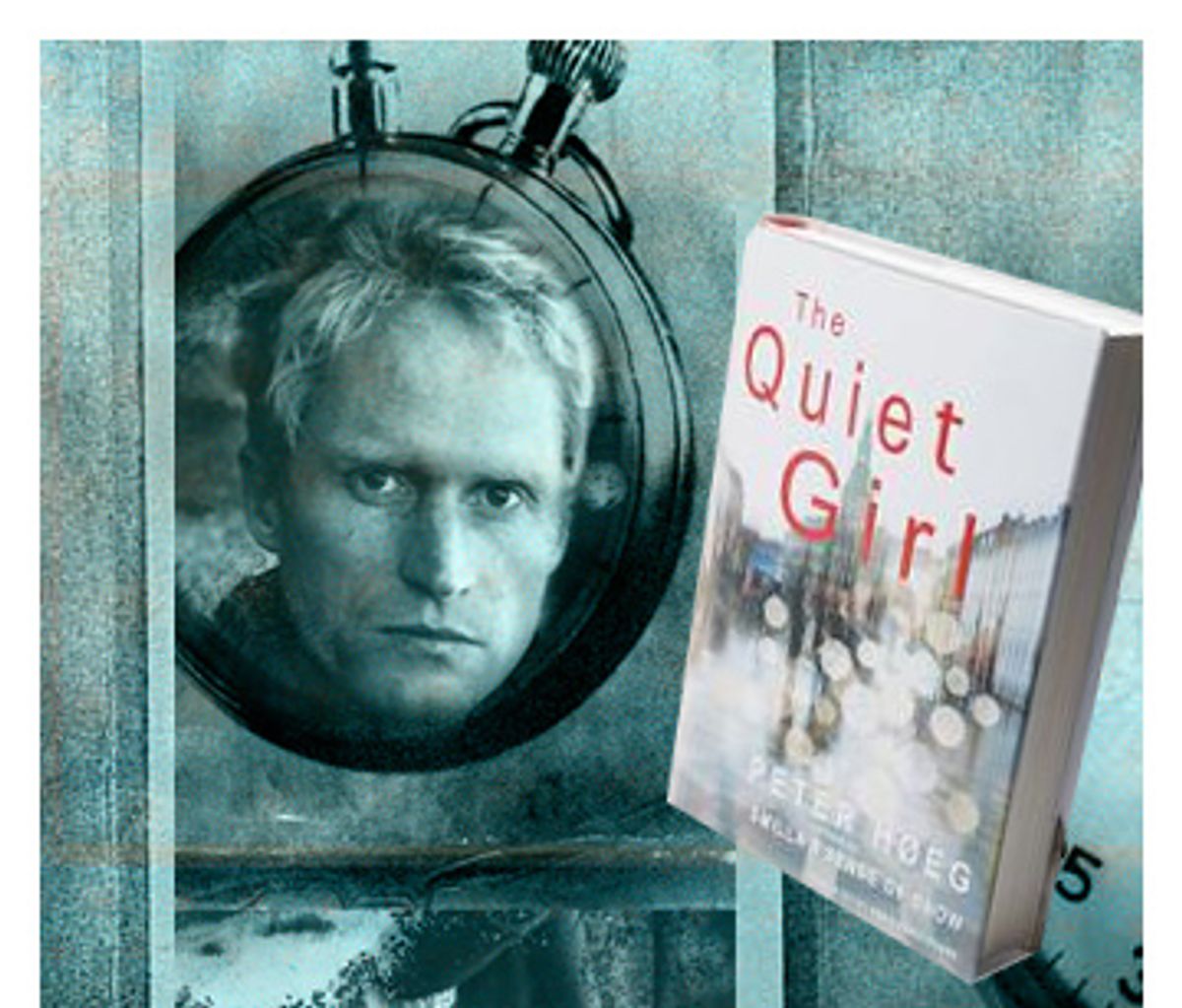 Kasper Krone, the protagonist of Peter Hoeg's "The Quiet Girl," has a special gift: He can hear through closed doors, down hallways, across great expanses. Over the phone, he can discern a caller's location by listening closely to traffic sounds, boats moving nearby, the precise key of the church bells ringing in the distance.

Kasper's extraordinary hearing also allows him to read people: The pitch and quality of their tone reveal their essential nature, the emotional landscape of their lives and their visceral reaction to the moment. "She was in A-flat minor," Kasper reports of a woman he just met. "Under other circumstances he could have listened to her for hours." A foe is sized up quickly. "Kasper heard the man's emotional register: it was broad, nuanced, and explosive. Very light and very dark, evenly divided, as in the case of Mozart."

The same mix of light and dark could be said to characterize Hoeg's writing, which whips us, head over heels, into Kasper's playful but melancholy world with the intensity and fervor of the opening measures of Mozart's Symphony No. 40 in G minor. A talented clown and musician who has sidestepped serious emotional involvements all of his life, Kasper finds himself, at age 42, abandoning his longtime habits when his superhuman hearing sets him on the trail of a mysterious kidnapping. At the center of the mystery is the quiet girl, a child whose silence belies frightening powers but promises Kasper a respite from the cacophony of sounds that plagues him day and night.

Although he has composed a compelling crime mystery, Hoeg is far from content to scatter his tale with little clues, mysterious dark figures, chase scenes and brutal standoffs that more than once involve unforeseen head butting. These are merely the combustible materials that keep the story moving steadily forward. On each page, we find something far more transcendent: snippets of philosophy, deft emotional insights, agile jokes and a fixation on the heartbreaking power of sound -- both music and ambient noise. On good days, Kasper can hear love and sweetness and industry in the streets of Copenhagen, Denmark. On bad days, noises invade his head, loudspeakers "gurgl[e] like a stuffed turkey," the dissonant sadness of strangers slips into the foreground, uninvited.

As Kasper draws closer to understanding who the quiet girl is and who's holding her and a group of children with similar gifts captive, confrontations become increasingly violent and surreal. Every passing character begins to seem nefarious, chase scenes are interspersed with flashbacks of Kasper's sad childhood or arguments with former lovers, and the world is full of intimidating figures who appear to promise either spiritual salvation or annihilation, or both.

As with Hoeg's best-known novel, "Smilla's Sense of Snow," women occupy a magical and terrifying place in the story. Whether they're 70 or 12 years old, Hoeg's women and girls are special -- intuitive, powerful, more connected to one another and to God than men are, and sometimes also more manipulative and less trustworthy. Kasper, in fact, refers to God as "SheAlmighty"; only a woman could create this bewildering, natural world, with all of its unpredictable joys and sorrows.

While the protagonist and antagonist of this story are both men, they repeatedly find themselves powerless in the face of disconcertingly strong women. The male characters rely on charisma or money or brute strength, but ultimately they miss the big picture thanks to their pride or their violent urges. The ego's battle for emancipation from its own petty needs plays out in tragicomic standoffs between Kasper and his enemy, a brilliant but greedy man who infuriates Kasper not with his pride but with his claims of modesty and enlightenment. In one memorable scene, each enormously egocentric man tries to appear more humble than the other, bowing lower and lower until they knock heads, at which point they go straight for each other's throats.

Repeatedly in "The Quiet Girl," we return to the dilemma faced by great artists in wrestling with their talents. While Kasper disarms friends and strangers alike with charms and wit that could seduce the tusks off a woolly mammoth, these gifts sometimes block his path to enlightenment, and fuel his sense of longing. Moreover, Kasper's memories reveal a deep fear of investing too much in human relationships: "The tragic events were doors that opened to understanding that we all are living on borrowed time and the things that are important to hold on to -- life, happiness, death, love, inspiration -- are completely out of control."

In his attempt to beat back the noise created by everyday life, Kasper presents an exaggerated portrait of the human condition: We are all, in our daily lives, besieged by trivialities, trampled upon by the busying details of everyday existence. We swat away distractions, hour by hour, in order to touch something bigger, some passion that might free us from the mundane.

"We all try to camouflage the monotony," a mysterious abbess tells Kasper. "But it takes a lot of energy. To insist on being special all the time. When we're so much like one another anyway. Our triumphs are the same. Our pain. Try for a moment to feel what relief there is in the ordinary."

While undeniably engrossing, Hoeg's mystery can be difficult to follow. It's impossible not to miss some crucial detail along the way. Occasionally, Hoeg's prose spills over, too heavy for the moment: "It was beef soup; it tasted of eternal life and of the fact that all living beings consume one another."

But more often than not, the ambition of Hoeg's prose renders his pages dense and rich and provocative. Simple, passing interactions between strangers can feel intimate or menacing, or both. Sights and sounds take on a palpable urgency, buoyed by a wicked sense of humor: "The problem with anger against God," Kasper laments, "is that it's impossible to go higher in the system to complain."

When the mystery at the center of "The Quiet Girl" is finally laid bare, it doesn't bring with it a deep feeling of satisfaction or peace. But as Kasper learns along the way, the completed puzzle doesn't matter here so much as the dangerous and illuminating questions posed by each intricately crafted puzzle piece.