What you missed while watching "Chad Vader" 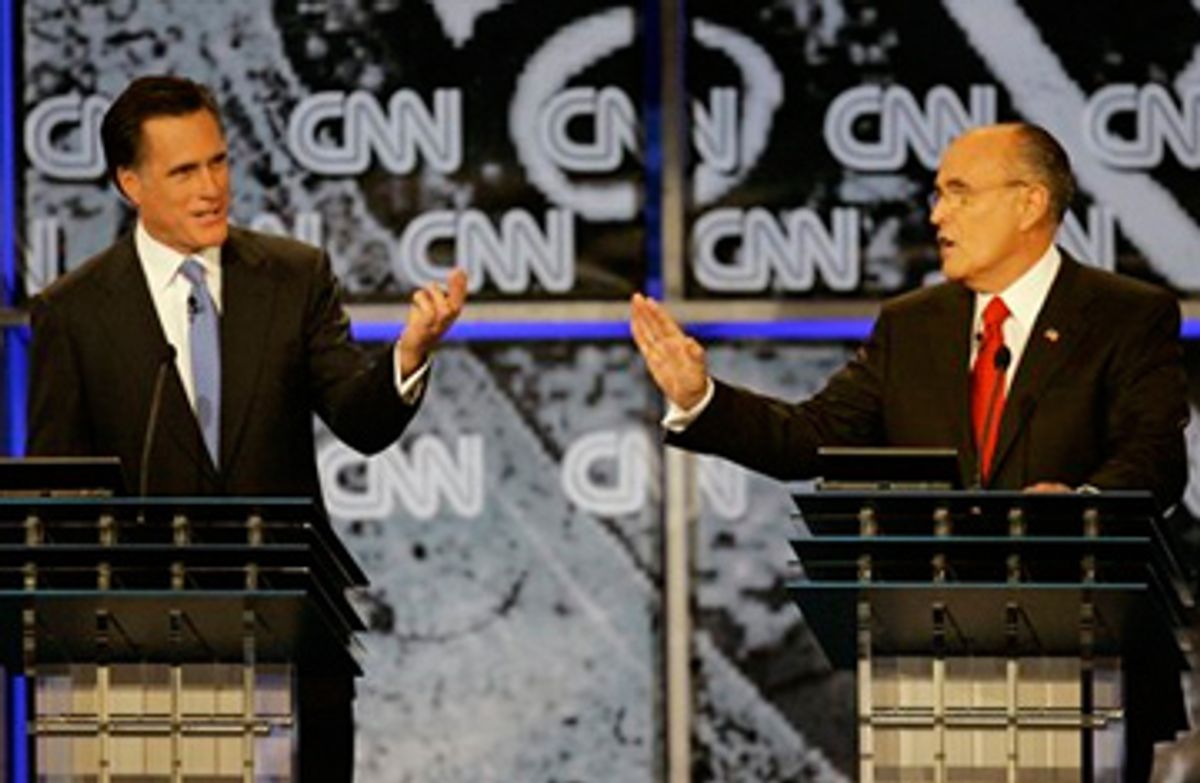 0 minutes. CNN's Anderson Cooper is looking especially dapper tonight. His suit and shirt collar make sharp triangle shapes with his silk tie, which is the color of wet cabernet grapes. His preternaturally white hair parts powerfully to the right, a series of straight lines betrayed by a single strand that falls a centimeter onto his forehead. No one is perfect. But tonight is not about the Coop, his hairdresser or his tailor. Tonight is about You. That's right, this is the Republican YouTube debate. You are the star. "All the questions tonight come from you," says the Coop. "You."

1 minute. But You must wait. A guy named Jim comes onto the stage to introduce a Florida governor named Charlie, who talks for a while, and then asks the candidates to walk out. California Rep. Duncan Hunter looks scared. Arizona Sen. John McCain gives the thumbs up. When former Tennessee Sen. Fred Thompson comes onstage, McCain shakes his hand. Then McCain shakes the hand of former New York Mayor Rudy Giuliani. Then former Massachusetts Gov. Mitt Romney comes out. McCain does not extend his hand.

2 to 5 minutes. Horrible pain and agony. CNN is delaying the debate for photo ops again. CNN does not really care about You. Apparently, it cares about watching the candidates wave to the crowd like debutants on a parade float, while the Coop blathers a voice-over about what might happen once You get to ask your question.

6 minutes. The Coop introduces a video montage showing how crazy You are with all the crazy questions that You sent to YouTube. There are questions from animated aliens, a live-action snowman, Abe Lincoln, Benjamin Franklin, the ghost of Richard Nixon, stuffed animals, real animals and even Dick Armey, a former congressman from Texas. Dick Armey! Hilarious.

10 minutes. Finally, we begin. The first question comes from a gruff Brooklyn guy talking into a webcam. He asks Giuliani if he will continue to "aid and abet" illegal aliens, like he did when he ran New York as a "sanctuary city." Giuliani says he never did run New York like a "sanctuary city." "If we didn't allow illegals to report crimes, a lot of criminals would have gone free because they're the ones who had the information," he says. At about this moment, CNN cuts to a shot of Chuck Norris sitting in the audience.

12 minutes. The Coop, apparently forgetting that "all the questions" come from You, asks Romney if New York was a "sanctuary city" under Giuliani. This makes Romney happy. "Absolutely," he says, adding that Giuliani once even welcomed illegal workers to the city. The crowd gives Romney applause.

13 minutes. Giuliani has a comeback. "There was a sanctuary mansion," he says, in reference to Romney's home, where a company that hired illegal immigrants once did work. "At his own home, illegal immigrants were being employed," the mayor says.

14 minutes. Romney looks disappointed. "Mayor, you know better than that," he says. Then he explains that it would be un-American if he had gone out and asked for papers from every employee at his house with "a funny accent." At this point, the civil dialogue falls apart. Giuliani accuses Romney of having a "holier-than-thou attitude." Romney says, "immigration is not holier-than-thou." Giuliani says, "holier than thou" again. The words stop meaning anything.

25 minutes. One of You, in another web video, asks former Arkansas Gov. Mike Huckabee why he gave illegal aliens a discount for college in Arkansas. "We're not going to punish a child because the parent committed a crime," Huckabee responds, after pointing out that he merely supported merit-based scholarships for the children of illegal immigrants. "That's not what we typically do in this country."

28 minutes. Romney tries to take a piece out of Huckabee, calling him a "liberal" for wanting to give money to the children of illegal immigrants. "Mike, that's not your money. That's the taxpayers' money," he says. Huckabee responds by saying, "We are a better country than to punish children for what their parents did." Romney says that illegal children should not get benefits. The back and forth continues for a while.

30 minutes. The time for immigration squabbles comes to an end. Another one of You asks Texas Rep. Ron Paul if he agrees with some of his supporters, who believe that the Council on Foreign Relations is a conspiracy and that there is a secret plan to merge the nation with Canada and Mexico. "It's not so much as a sinister conspiracy," Paul says. "If we look for it, you'll realize that our national sovereignty is under threat." Indeed.

35 minutes. On a question about reducing the national debt, Giuliani says that President Bush should cut the budget of all civilian agencies by 5 to 10 percent. "We should commit not to rehire half of the civilian employees that will retire in the next 10 years," he says. So much for getting passports renewed, court cases heard or children's toys inspected.

40 minutes. McCain gets a question about the FairTax, which McCain does not support. So he turns on Paul, who is polling near double digits in New Hampshire -- likely McCain's make-or-break state in the race. "I've heard him now in many debates talk about bringing our troops home, and about the war in Iraq and how it's failed," McCain says. "And I want to tell you that that kind of isolationism, sir, is what caused World War II." The crowd goes nuts with cheers and boos. McCain has just called Paul a Nazi-appeaser. Paul responds by explaining that non-intervention is not the same as isolationism. The two men do not resolve their differences.

45 minutes. In another web video, You ask a question about farm subsidies, but the answers are pretty safe and boring. So the Coop says, "Since we're on fiscal matters, I would be remiss if I didn't ask this question." Then the Coop recounts a recent article by the Politico detailing the odd way the Giuliani administration billed for his security detail when the former mayor visited his paramour outside New York City. "I had nothing to do with the handling of their records," Giuliani says of his security expenses. "And they were handled, as far as I know, perfectly appropriately."

58 minutes. Another video from You. This time it's a guy firing his gun into a hill. Then someone throws him a shotgun and he cocks it. "What is your opinion of gun control?" he asks. Hunter, who is a hunter, chastises the man for throwing the gun. "You have to be safe with guns," he says to the prerecorded man on the screen.

59 minutes. Giuliani says something about "reasonable regulations" of guns, prompting a torrent of boos from the audience. "Let him answer," says the Coop. "Let me finish," says Giuliani. It doesn't matter. The former mayor has already lost much of the hardcore gun vote.

63 minutes. The candidates are all asked how many and what type of guns they own. McCain says he used to carry a .45 as a Navy pilot, but no longer owns a gun. Thompson says, "I own a couple of guns, but I'm not going to tell you what they are or where they are." Romney says, "I have two guns in my home. They are owned by my son Josh. He buys expensive things for me." This last one is an odd answer. If Josh bought the guns for his father, why would they still be owned by Josh? And if Josh owned the guns, why would they be in his father's house?

65 to 72 minutes. There are questions about black-on-black crime and punishing women and their doctors for abortion. Romney says he would promote two-parent families to end black-on-black crime. Thompson says overturning Roe v. Wade "should be our No. 1 focus right now." Apparently, this makes a 1973 Supreme Court ruling more important than terrorism, the Iraq war and the economy.

73 minutes. A guy named Tyler from Texas asks, "The death penalty, what would Jesus do?" Huckabee, the former Baptist pastor, dodges the question. "Jesus was too smart to ever run for public office," he says. "That's what Jesus would do."

75 minutes. Another Jesus question. "Do you believe every word of this book?" asks Joseph from Dallas, holding up the Holy Bible, presumably both the new and old testaments. The question goes to Giuliani. "Do I need to help you out, Mayor, on this one?" asks Huckabee. Laughter all around. Giuliani answers on his own, saying he reads the Bible frequently for guidance, but does not take every word literally.

77 minutes. Romney looks a little uncomfortable with the question. In a matter of seconds, he manages to say that he believes the Bible is "the word of God" five times. Huckabee saves Romney from himself, with a lengthy and eloquent discussion of the Bible, its allegories and its central messages. "The Bible is a revelation of an infinite God," he says. "And no finite person is ever going to fully understand it. If they do, their God is too small."

84 minutes. It's apparent that Colorado Rep. Tom Tancredo is also standing at the far end of the stage. Sometimes he speaks.

87 minutes. Romney and McCain get into a fight over waterboarding, which most experts consider torture under the Geneva Conventions. Romney says he wants to treat detainees like the United States treated Khalid Sheikh Mohammed, an architect of the Sept. 11 attacks, who is widely believed to have been tortured by the CIA. But Romney says, "I oppose torture." Then he refuses to say whether waterboarding is actually torture. McCain, who was tortured during the Vietnam War, is beside himself. "How in the world anybody could think that that kind of thing could be inflicted by Americans on people who are held in our custody is absolutely beyond me," he says. This may partly explain why McCain offered no handshake.

106 minutes. Retired Brig. Gen. Keith Kerr gets in front of his webcam to describe his 43 years of service to the nation. Then he drops this bomb: "I'm an openly gay man." He asks the candidates why they think American men and women in uniform are not professional enough to serve with gays or lesbians. Hunter says proximity to gays and lesbians does a "disservice" to conservatives in the military. Huckabee says the rule banning gays and lesbians from service is about "conduct" and not "feelings," which is OK. Romney gets tripped up again, since he once said he wanted gays to serve openly in the military, but now he does not. The Coop asks him three times if he has changed his position. Romney won't answer the question. The audience starts to boo, but it is probably booing the Coop.

112 minutes. After more than five minutes of gay talk, CNN cuts to another audience shot of Chuck Norris, restoring a straight vibe to the proceedings.

120 minutes. The candidates are asked about their thoughts on the Confederate Flag. Again, Romney seems flustered. "Right now, with the kinds of issues we got in this country, I'm not going to get involved with a flag like that," he says. "That's not a flag that I recognize so that I would hold up in my room." Romney has a room?

128 minutes. In the grand tradition of other debates, the last question is totally superfluous: How could Yankee fan Giuliani have rooted for the Red Sox in the World Series? The former mayor explains that he is an American League guy. "When I was mayor of New York City, the Yankees won four World Championships," Giuliani says. "Since I've left being mayor of New York City, the Yankees have won none." Presumably, this means that if Giuliani is in the White House, the Red Sox are finished.

130 minutes. The Coop calls it quits. "Thank you very much," he says, ending the debate. Then he turns to the camera. "The smoke is clearing and they ought to be hosing down the stage right now," he says. Translation: You did good.