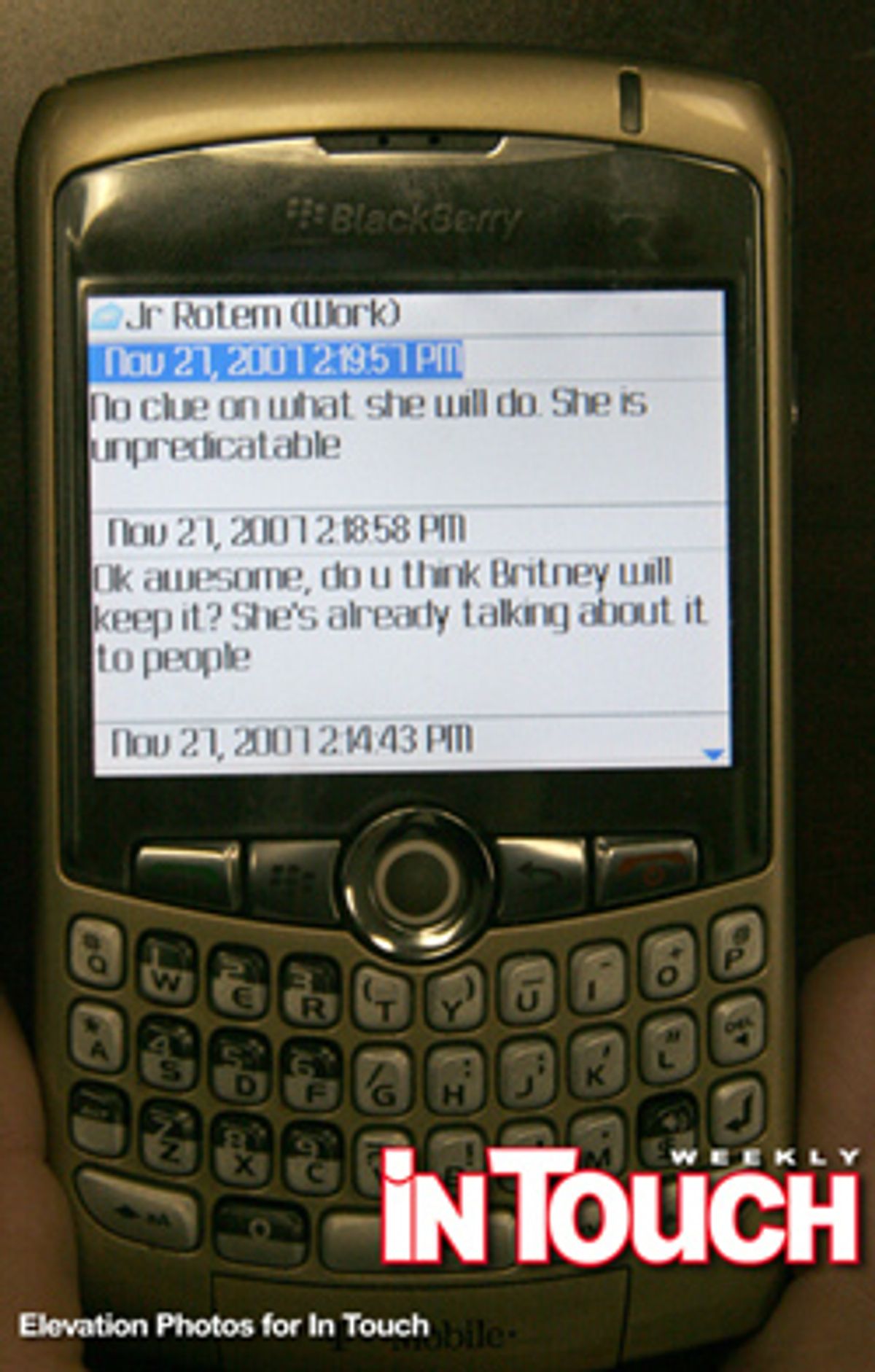 Even by the low standards of gossip journalism, In Touch magazine's Britney Spears scoop this week is amazing for its departure from standard norms of reporting.

In skyscraper-size cover type, the magazine claimed Spears was pregnant and that "the father of Britney's third child confirms it's true." But the putative father, music producer J.R. Rotem, quickly issued a statement denying ever confirming such a thing.

Oh yes you did, said In Touch. As proof of Rotem's confirmation, the magazine posted screen images of a BlackBerry conversation that In Touch says it had with the music producer. That conversation went as follows:

IN TOUCH: They are saying britneys pregnant and you're the father...
JR: Its true
IN TOUCH: OK, awesome, do u think Britney will keep it? She's already talking about it to people
JR: No clue on what she will do. She is unpredictable.

Yeah, OK, awesome, but seriously, In Touch, you can't report stories on your BlackBerry! You just can't. You use the BlackBerry to set up contact with the source, and to mark a date in your calendar for when you plan to speak with the source.

But you can't confirm a scoop on your BlackBerry. There's no emotion there, no way to assess authenticity -- no way to know whether the person on the other end is the person you think it is, or, if it is that guy, whether what he means is what you think he means. (And as the Huffington Post's Danny Shea nicely points out, In Touch's pictures prove even less; you can give a BlackBerry contact any name -- Britney Spears, Pope Benedict, Beelzebub -- and take pictures of you pretending to have a conversation with him.)

Obviously this Spears thing is not a serious issue, but it brings up a journalism-circle chestnut, the old rumination on how technology changes reporting.

Though reporters increasingly rely on e-mail and instant messages, most of us recognize the limits of these things. Any technology that removes you from your source brings in doubt.

When you talk to someone on the phone, there is a possibility that the person isn't really who he says he is, or that he'll say something sarcastically but that you won't get the sarcasm because you can't see his face.

E-mail and IM are even trickier. Studies show that the absence of both audio and visual cues increases the chances of miscommunication -- what people mean when they write an e-mail is not always what recipients read.

This doesn't mean you can never use an e-mail and IM in your reporting. Sometimes a source can only talk to you this way. On the morning of 9/11, I wrote a short piece about a conversation I had with a fellow trapped in a building in Lower Manhattan -- our conversation was over IM, as phone service had been disrupted.

But IM and e-mail are best for adding color or tertiary information to a story. A dashed-off text message from a source -- "its true" -- is not sufficient to break a story.

I'm guessing most real reporters know this. We could not ever come to this, right?