Hillary may no longer be able to count on the Granite State as her "firewall" against defeat in Iowa. 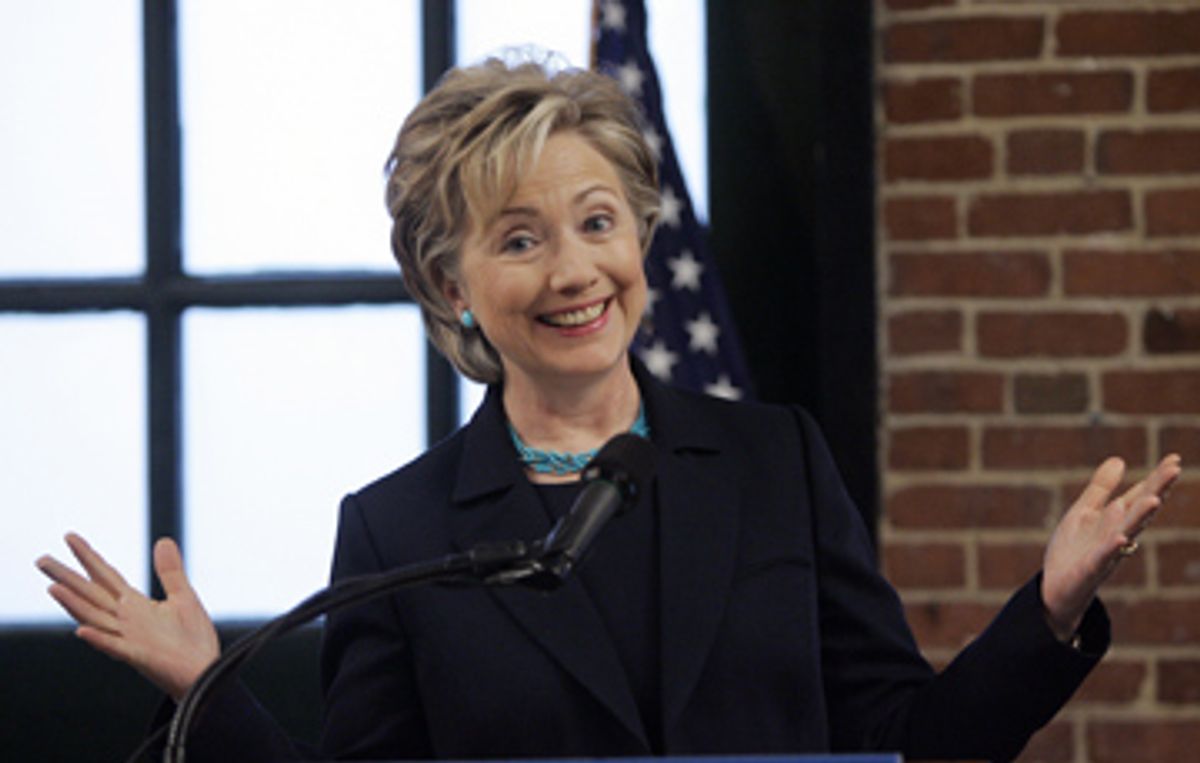 It was a one-question press scrum designed for the local TV cameras, and Hillary Clinton provided the appropriate burst of sincere blather. "There is something special about the New Hampshire primary," she said Monday. "It means a lot to me personally because of my experience with it back in 1992 with my husband."

The New Hampshire primary has long been regarded as holding another meaning for the former first lady: It was her so-called firewall state, the place where she could declare herself the "Comeback Kid," even if she lost the opening-gun Iowa caucuses. Bill Clinton first used that line on primary night 1992 when -- despite the twin firestorms over Gennifer Flowers and his Vietnam draft records -- he finished a strong second. But for Hillary all the polls and portents pointed to a walloping victory, since all through the late summer and early fall, the horse-race numbers consistently gave her a 2-to-1 lead over Barack Obama, her nearest challenger.

But now the gap has narrowed, with six published polls this month all giving Clinton a lead of between 10 and 14 percentage points. And for the first time this political season, there is an inkling that Clinton might not be able to rebound from an Iowa defeat here in the Granite State. "I think it's very difficult for this to be Hillary's firewall state if she loses Iowa, unless she is a close second there," says Andy Smith, who directs the University of New Hampshire Survey Center. "Historically, there is a 10 percent bounce in New Hampshire for the Iowa winner," Smith points out. "And equally important, the loser of Iowa takes an 8-10 percent hit."

Even the Clinton campaign acknowledges the potential for a bumpy ride. "This is going to be a tighter race than it's been perceived up to now," said Nick Clemons, Clinton's state coordinator. "New Hampshire is just not the kind of state that a Democrat wins by 20 points." Kathy Sullivan, who chaired the state party for eight years and is now backing Clinton, reflects a similar attitude. Asked about the dip in the New York senator's numbers, Sullivan said, "I think it just is the inevitable closing of the primary."

New Hampshire is a much easier state to poll than Iowa, since, unlike the caucuses, there is little uncertainty who will vote in the high-turnout primary. But the traditional wild card in New Hampshire is that independent voters can participate in either party's presidential primary. In 2000, for example, the independents abandoned Bill Bradley's uphill battle in the Democratic race against Gore to flock to John McCain, who defeated George W. Bush by 20 percentage points.

But this year, there are so many added variables that mapping the solar system seems easy in comparison. For the first time in history, there is only a five-day gap between the Jan. 3 Iowa caucuses and the Jan. 8 New Hampshire primary. (In recent presidential cycles, the interval had been eight days.) No one -- absolutely no one -- is willing to confidently predict whether this five-day interval will accentuate the influence of Iowa (the caucus results will dominate the news) or diminish it (the primary will be over before the winning candidate can get the full bounce). As Matt Rodriguez, Obama's state coordinator here, put it, "New Hampshire voters make up their own minds, but what the five-day sequences means remains unknown."

For all the hallowed history of the New Hampshire primary, for all the mythology of presidential contenders answering questions in living rooms, for all the stress on the importance of face-to-face campaigning, Democrats here for the first time will be suffering from a candidate gap. Iowa has grown so important in the Democratic equation that it is unlikely that any candidate will risk spending more than a few days here in December. Suddenly, New Hampshire has become the fly-over primary. The sad reality is that campaigning here will be mostly confined to a manic four-day sprint after the Iowa caucuses.

The other variable is that several of the GOP contenders -- particularly John McCain and Rudy Giuliani who have scant hopes in Iowa -- will be devoting much of December to campaigning in New Hampshire. Will the presence of these unorthodox Republicans -- the only GOP candidates with much crossover appeal in New England -- reduce the number of independents choosing to vote in the Democratic primary? And will the inevitable Republican attacks on Hillary make it seem as if she is fighting a two-front war? Or will they strengthen her credibility as the Democrat who can withstand the GOP attack machine?

Even partisan Democrats are puzzled by the choices facing them, especially since John Edwards (running about 15 percent in most recent polls) and Bill Richardson (bumping along around 10 percent) are also factors. A mid-November CNN-WMUR poll conducted by the University of New Hampshire found that a whopping 47 percent of Democrats said they were "still trying to decide" on a candidate. Even that number understates how much is up for grabs. When asked separately about Clinton, Obama and Edwards, 75 percent of those polled said that they were supporting or might consider voting for each of them.

"Clinton has run a very good front-runner's campaign in New Hampshire, even compared to Al Gore in 2000," said Dante Scala, a political scientist at the University of New Hampshire. But what intrigues Scala is the high opinions that New Hampshire Democrats have about all the leading candidates, which means that it would be easy for the state's traditionally late-deciding voters to shift their allegiance. As he puts it, "Hillary's doing very well here, but I don't think that things are sewn up. There a bit of a wall, but no firewall."

Rival campaigns acknowledge Hillary's support among the state's Democratic establishment and Bill Clinton's continuing popularity in the state. But they also argue that her ceiling in the state is less than 40 percent, which still may be enough to prevail in a multi-candidate race. As Portsmouth Mayor Steve Marchand, a strong supporter of Bill Richardson, asked, "If you don't know enough about Hillary Clinton by now to be for her, what other information could you possibly learn in the next six weeks?"

As the most affluent state on the early caucus and primary calendar, New Hampshire is a state where, in theory, Obama should do well. He fits the profile of the new-look, upscale, intellectual reformer that New Hampshire has fallen in love with in the past -- mostly notably Gary Hart in 1984 and Paul Tsongas in 1992. Edwards in 2004 all but abandoned New Hampshire to concentrate on Iowa -- and then after his strong second-place finish in the caucuses, he could not capitalize on it here, limping home a weak fourth in the primary.

This time around, the Edwards campaign appears to have learned its lesson. "The idea is to do well in Iowa," said national strategist Joe Trippi, "and to do enough to lay a foundation here." Beth Leonard, the Edwards state coordinator, offers a similar refrain, "John Edwards is in a different place about New Hampshire than he was just four months ago," she said. "He's in it to win. The more audiences he gets in front of here, the more comfortable he becomes."

But for the most part, Edwards, like his rivals, will be in Iowa for the Christmas season. And the trick here in New Hampshire will be how to woo voters over the holidays while the candidates themselves are AWOL. As Clemons, the Clinton state coordinator, joked, "Maybe we should think about caroling our policy proposals to the tune of 'God Rest Ye Merry, Gentlemen.'" That makes about as much sense as anything else in the first primary state that offers little holiday balm for Hillary Clinton or any other Democrat.