Forget Rudy's trysts. The real scandal crying out for investigation is his firm's business with Qatar, a haven for al-Qaida. 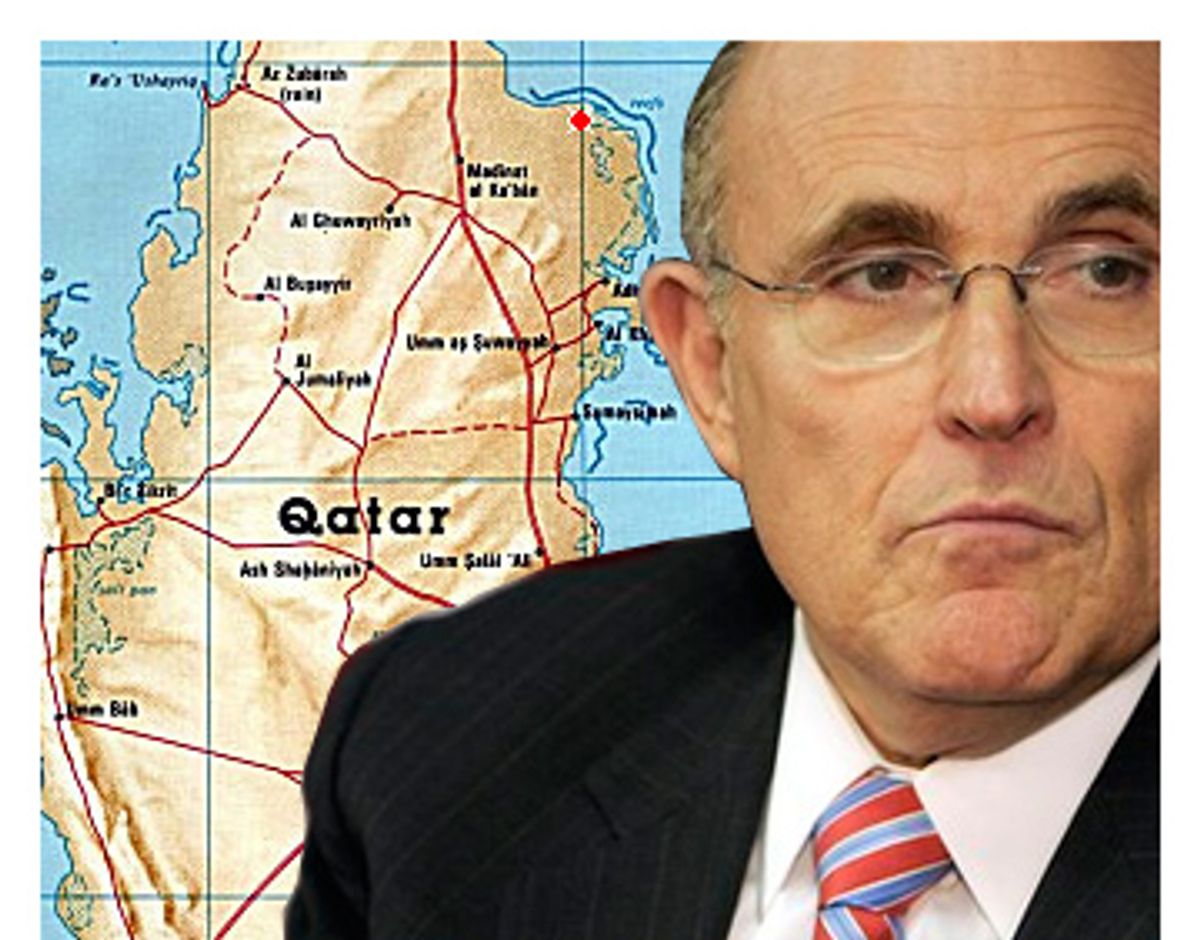 The familiar herd instinct of the mainstream media is powerful, unswerving and often plain wrong. While editors and producers are supposed to make judgments based on a combination of news value and public interest, their choices often seem to be based on nothing more elevated than an allergy to complexity or an affinity for smut. And occasionally, as in the case of Rudolph Giuliani during this past week, the sudden appearance of not one but two juicy investigations overwhelms the system's capacity to absorb and regurgitate.

But when the nation's news executives decided which of two highly embarrassing Giuliani stories to feature, nearly all of them made the wrong choice. While they lavished enormous attention upon a Politico story dealing with adultery and bureaucracy, they should be devoting at least as much time to yet another in the long series of Wayne Barrett scoops in the Village Voice, because this one involves business and terrorism.

If broadcast minutes is an accurate measure, the sexier tale was Ben Smith's investigative feature in the Politico, which used city documents released under New York's Freedom of Information Law to trace the former mayor's early trysts from 1999 to 2001 with his then mistress and current wife, Judith Nathan Giuliani. As usual, the sex angle had to be approached via worthier concerns, such as whether the time of the police officers who guarded Giuliani during his trips to see Nathan on Long Island was billed to the correct city agency.

As Smith's creative reporting revealed, someone evidently tried to conceal the substantial costs of the mayor's romantic excursions by attributing them to several unlikely budget lines -- including the Loft Board, which regulates the rents of residential loft apartments, and the Assigned Counsel Administrative Office, which oversees the provision of legal counsel to indigent defendants.

Amusing as it was to learn that somehow those obscure agencies were billed more than $400,000 for the mayor's covert visits to Southampton -- and that the bizarre billings had later been referred to the city Department of Investigation for a quiet burial -- this story tells us little we did not already know about Giuliani. He denies knowing anything about the billing procedures for his trips, and there is no proof that he did. And he was entitled to police protection wherever he went, even to his girlfriend's condo.

Nevertheless, CNN chose to include a question about the Long Island trips in the Republican YouTube debate.

Meanwhile, Barrett's latest article -- probing the lucrative relationship between Giuliani's security firm and the emirate of Qatar -- prompts questions that "America's Mayor" might have found truly hard to answer. With Qatar's troubling record as both an American ally and a longtime haven for al-Qaida terrorists, including 9/11 mastermind Khalid Sheikh Mohammed, or "KSM," the little Gulf sheikdom is a curious client indeed for Giuliani Security and Safety, a division of Giuliani Partners.

If Giuliani was unaware of the terrorism issues surrounding Qatar before he signed his initial contract with the emirate in 2005, then he must not be quite the expert he claims to be. And if he knew of those issues but signed up anyway, that raises other questions.

Certainly he should be asked to explain his connections with the emirate and especially with Interior Minister Abdullah bin Khalid al-Thani, who has long been suspected of harboring KSM and facilitating the travel of al-Qaida operatives to and from Qatar. Whatever reasons the United States may have for maintaining diplomatic and military ties with Qatar, the contradictions in doing business with that nation for a hard-liner like Giuliani should be explored.

Reluctant as the Republican front-runner apparently is to sit down for an interview with Barrett, perhaps other journalists should inquire about those Qatar deals (and for that matter, all of the other business relationships that he has so far declined to disclose). Here are a few pertinent questions to encourage them:

1. Are your company's security contracts with Qatar negotiated and administered through the Qatar Ministry of the Interior, as a government spokesman confirmed to the Village Voice?

2. Are you aware that the interior minister appointed in 2001 and reappointed this year by the emir of Qatar is Abdullah al-Thani, the former minister of Islamic affairs and a strict Wahhabi Muslim who has been identified in U.S. press and government reports as a protector of Khalid Sheikh Mohammed?

3. Are you aware that Abdullah al-Thani, a strict Wahhabi Muslim, reportedly hosted Osama bin Laden on two visits to his Qatari farm?

4. Were you aware of that allegation against Abdullah al-Thani when you agreed to work for the Qatar government in 2005?

5. Are you aware that Abdullah al-Thani is a defendant in federal civil lawsuits brought by survivor families against officials deemed directly or indirectly culpable for the 9/11 attacks?

6. Are you aware that former CIA officer Robert Baer has accused Abdullah al-Thani of helping KSM escape from Qatar just before he was to be arrested in 1996 by the FBI?

7. Are you aware that Baer's account, based on the testimony of a former Qatari official, implicates the emir in KSM's escape as well?

8. Did you ever discuss Abdullah al-Thani's alleged terrorist ties with your friend Louis Freeh, the former FBI director, or with the two former FBI counterterrorism agents who work for Giuliani Security?

9. Were you aware when you agreed to provide security services to the emirate in 2005 that the U.S. State Department's annual report on worldwide terrorism released several months earlier had criticized Qatar for coddling Islamist extremists and permitting "members of transnational terrorist groups" to reside there?

10. Are you aware that the government of Qatar has hosted the leadership of Hamas and provides millions of dollars monthly to the Hamas authorities in Gaza -- and that the emir applauded Hezbollah's "victory" over Israel during last summer's war in Lebanon?

It is long past time for Giuliani to begin to answer those questions and many more about Giuliani Partners and its subsidiaries as well as his law firm, Bracewell & Giuliani. We already know more than we need to know about Judi Nathan.