Figuring out which (if any) organic wine to buy can feel like navigating dawn with a hangover. 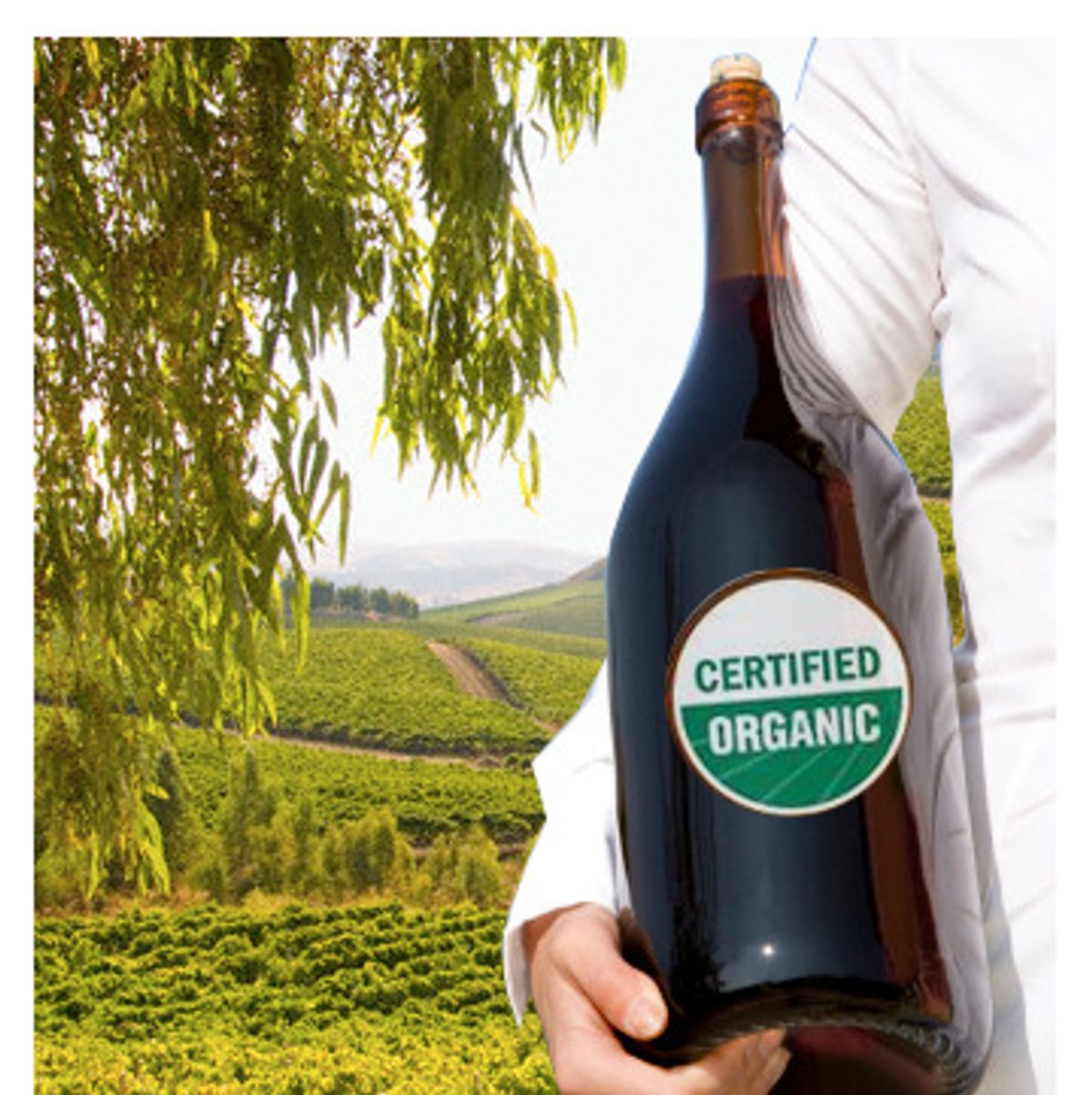 Ever since Wal-Mart began stocking organic food, it's clear a lot of consumers now believe that produce and milk produced without pesticides or hormones taste just as good as, if not better than, their conventional brethren. Logic would say that this also goes for "organic wine," which I see cropping up more and more often at health food stores and markets. But in this case the label doesn't tell the whole story.

Wine labeled organic means that at least 95 percent of the grapes used were never sprayed with pesticides or synthetic fertilizers. Such chemical purity is ensured by 40-foot buffer zones from farms that spray specific chemicals, loads of paperwork and on-site visits from third-party certifiers. Organic grapes then go to a certified organic winery that doesn't use chemical cleansers or add any preservatives like sulfur dioxide, an antioxidant that gives wine a significant life span.

Sulfites, a naturally occurring side product of fermentation, are added to wine as a way to prevent it from making a fast-paced trip to vinegar. But since 1990, when Congress passed the Organic Foods Production Act, no organic food is produced or handled with any synthetic chemicals, and that includes wine.

For hundreds of years, sulfites have been a winemaker's ally. Sulfur dioxide keeps wine barrels from harboring acetic bacteria that can sour their liquid contents. The preservative keeps sweet white wines from losing their fruity flavors and turning brown. Red wine contains tannin, a natural preservative, but even so, experts say they need some sulfites to keep them drinkable for a number of years. No one has yet found a nonsynthetic replacement for sulfites. Although organic-wine makers now use microfilters to get rid of bacteria and give their wines a longer shelf life, some wine experts say organic wines aren't stable and change flavor within months of being bottled.

"Generally the taste of organic wines isn't very good," says Andy Waterhouse, interim chairman of the Department of Viticulture and Enology at UC-Davis. "People who want to buy organic wine should refrigerate it after buying. Personally, I'm not seeking out organic wines."

Robert Gross, owner of Cooper Mountain Wines, which produces an organic wine, admits that making wine without sulfites "can take some of the taste away." At the same time, he says, "we can make pretty good wines without sulfur, ones that are much fruitier than others."

Sulfites have been kept out of organic wine to maintain the authenticity and integrity of the organic label -- food that's free of synthetic chemicals, explains Brian Baker of the Organic Materials Review Institute, a nonprofit based in Eugene, Ore. When organic wines were first made decades ago, they developed a loyal customer base among people with sulfite sensitivities, who can experience anything from headaches and rashes to shortness of breath or, in the rare case, death, when exposed to sulfur dioxide.

However, sulfites are a problem mainly for asthmatics, according to the U.S. Food and Drug Administration. Furthermore, the role of wine in triggering asthmatic responses has been overestimated, according to Thorax, an international journal of respiratory medicine, and the British journal, Clinical & Experimental Allergy.

"People are overly concerned. There are more sulfites in dried prunes than there are in wine," says Dr. Ulrike Ziegner, founder of the Riviera Allergy Medical Center in Redondo Beach, Calif. "If you're a severe asthmatic, you should stay away from sulfites, but the rest of the world, I think, will be fine. Most people, if they have a little rash after they drink wine, or have a stuffy nose, are probably reacting to the alcohol in wine that dilates the blood vessels in their skin and nose."

Although many winemakers complain about the no-sulfite-added aspect of the organic law, it could take an act of Congress to amend that rule; with several other more pressing issues to deal with, it's unlikely that lawmakers will revisit organic-wine labeling laws anytime soon.

Yet wine lovers don't always have to pick between something delicious and something virtuous. At my local wine shop, Cork, owner Darryl Joannides doesn't carry any wine that doesn't have added sulfites because, in his words, "there's too many defects that cause customer dissatisfaction." Yet as we walked the aisles through over 500 varieties of wine, he pointed out a bunch of alternatives.

Picking up a bottle, he showed me a label on the back that read, "Made with organic grapes." This is a legal definition established by the U.S. Department of Agriculture in 2002. Such wines use at least 70 percent organic grapes that come from vineyards that do all the paperwork and follow the same rules, with the same site visits, as wines labeled organic. However, they can use sulfites as long as the concentration doesn't exceed 100 parts per million. (Wine can legally contain up to about 350 ppm.) Oregon Tilth, one of the nation's oldest organic certifiers, estimates that most winemakers that employ the "made with" label use entirely organic grapes; they just have a beef with the sulfite regulation.

European certifications like BioSuisse, France's Biofranc and Ecocert, and Italy's ICEA (Instituto Certificazione Etica e Ambientale) mean wine is produced from organic grapes on a farm visited by an inspector -- but these foreigners think the American banishment of sulfites is ridiculous. "This whole debate about sulfites is ludicrous," says Véronique Raskin, the French-born founder of the San Francisco-based Organic Wine Co., importer of French, Italian, Spain and Portuguese wines. "With all the time we've wasted discussing sulfites, we could have saved the rain forests and a few other actual problems."

Increasingly, a number of winemakers, such as Oregon's WillaKenzie and California's Benziger Family Winery, strive to give vineyards a more sustainable reputation by farming in ways that conserve soil and water and create habitat corridors for wildlife.

Although there's no official label at this point to identify these sustainable wines, LIVE (Low Input Viticulture and Enology Inc.) certifies participating wineries and vineyards in the Pacific Northwest, and the California Sustainable Winegrowing Alliance lists wineries that follow sustainable guidelines on its Web site. Of course, grapes are farmed as a monoculture, which is not something that leads inherently to ecological balance. Seeking out wines that use as few chemicals as possible isn't only environmentally responsible but can lead to tasty drinking.

Marnie Old, assistant dean of wine studies at New York's French Culinary Institute, offers that regardless of how wines are certified, those made from pesticide-free grapes are more interesting and unique. "The less interference in the farming of the fruit, the more pure the flavor is," she explains. "Everything you do to that ingredient, the grape, is reflected in the final product. It's sort of like you can taste the fingerprint of the wine. As you start climbing into the ranks of premium wine there's a distinctiveness of the flavor."

Now when I go into a wine shop, I look past the organic label, searching the small print on the back for "made with organic grapes." Or I take the easy route and ask the expert. At Cork, on Joannides' recommendation, I bought a 2004 bottle of Manoir de la Tête Rouge's Cabernet Franc. Made with organic grapes and low levels of sulfites, it tasted delicious.