Far from exposing children to "the demonic," as some Catholics claim, "The Golden Compass" celebrates independent thinking. As a Catholic, I hope my daughter will see it. 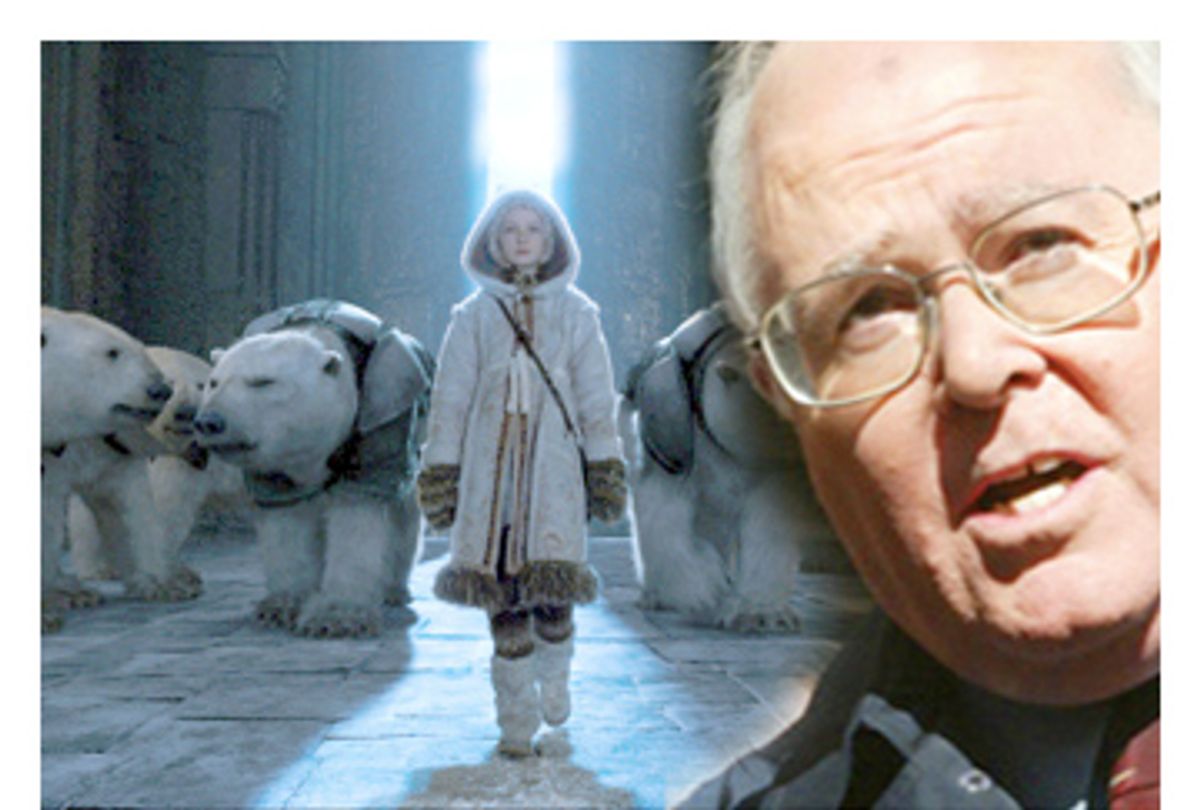 This Sunday morning, I will take my eldest daughter, Lucy, nearly 8, to Mass at our church down the street, as I do every week. Afterward, I will drop her off at Sunday school for First Communion preparation. Then, if she desires, I'll take her to see a movie the Catholic League is urging me to boycott, a film based on a series of books the League claims was "written to promote atheism and denigrate Christianity, especially Roman Catholicism."

The run-up to New Line's lavish adaptation of Philip Pullman's "The Golden Compass" has been marked by indignant protest from Christian quarters. The film is based on the first of Pullman's wildly successful, Whitbread and Carnegie award-winning trilogy, a series that makes generous and undeniably negative use of Catholic imagery: In "His Dark Materials," the world is run by the cruel "Magisterium" -- which happens to be the word for the teaching authority of the Catholic Church. A former nun declares, "The Christian religion is a very powerful and convincing mistake." People have animal spirit companions called, provocatively, daemons. And the author kills his God figure.

No wonder some Christians, especially Catholics, feel Pullman is singling out our belief system for scorn. And the people who brought you the Inquisition don't usually take dissent lying down. The Catholic publisher Ignatius Press is currently offering a book on Pullman titled "Pied Piper of Atheism." The Catholic group Family Life Center has posted "An Urgent Warning for Parents" cautioning that after seeing the film, children "will rush out to buy and digest Pullman's God-hating and Catholic-bashing books. Philip Pullman's work is about to bring millions of children into contact with the demonic."

But the biggest outcry has come from the Catholic League. In the last few weeks, the League's call for a boycott has been reported in a slew of newspapers and television news outlets, including CBS News, Entertainment Weekly and Newsweek. Not a bad return for an organization that, as Kathy Griffin has noted, appears to be "one dude with a computer." On its Web site, the League's president and sole spokesman Bill Donohue rails that "No parent who wants to bring their children up in the faith will want any part of these books." After seeing the "watered down" film, however, unwary parents may be inspired to purchase them for their children for Christmas. That infiltration of books that peddle atheism to kids, he declares, is the film's "pernicious agenda."

My daughters go to school with kids who are Jewish and Muslim and Hindu and atheist. They know that people believe and don't believe in different things, and I'm raising them to respect that. If faith is so fragile that it can be shaken by the introduction of challenging ideas, what good is it? You want a pernicious agenda? Try taking your kid to "High School Musical: The Ice Tour," and behold the hucksterism of $30 T-shirts in action.

Yet there's no official Church position on Pullman, and not all Catholic outposts have been so vehement. Catholic Digest, the nation's largest magazine for Catholics, suggests parents use the film as a springboard to "encourage your children to reflect about the issues the book raises in a thoughtful and intelligent manner." A review from the venerable reporting agency Catholic News Service notes, "This is not the blatant real-world anti-Catholicism of, say, the recent 'Elizabeth: The Golden Age' or 'The Da Vinci Code' ... this film -- altered, as it is, from its source material -- rates as intelligent and well-crafted entertainment."

As far as I know, Bill Donohue has not yet seen "The Golden Compass." I have. I suspect it would piss him off. If you're offended at depictions of what the narration refers to as a "ruling power fearing any truth but their own," an entity Nicole Kidman's character describes as protecting its flock from "messy thoughts and unhappy feelings," then this is not the movie for you. While not as direct as the books -- director Chris Weitz removed references to the Church from the script, saying, "I thought it would be unnecessarily provocative and hurtful to certain individuals" -- the film's potentially subversive message of the power of truth telling and independent thought remains intact. I think the dwindling number of us who still call ourselves Catholic can handle it -- it's the folks hoping for a harsher critique of the Church who will likely be more offended.

My only objection to the film isn't philosophical, it's practical: The movie is pretty damn intense. There's child abduction, cruelty, violence and a bear-on-bear battle that drew gasps from the audience I saw it with. Lucy, who is still wrecked over the ending of "Harry Potter and the Half Blood Prince," and I will have to work together to decide when she's ready for this. And my 3-year-old, who shrieked at "Enchanted," is definitely sitting this one out for a few years.

Every parent filters. I am as quick as anyone to put the kibosh on any book, movie or toy that espouses a negative or dubious philosophy. But I have far more concerns for my daughters and their values when they beg for Bratz dolls or over-identify with Disney princesses. And I'll be OK if the girls who dressed for Halloween this year as Hermione Granger and Chihiro from "Spirited Away" one day discover Pullman's brave, intelligent, resourceful heroine Lyra Belacqua.

I want my children to understand that human beings and institutions are fallible. That sometimes those who claim moral authority can traffic in corruption and abuse. I want them to be angry at every wrong perpetuated in the name of God. To question authority. To be feisty troublemakers for positive change. I've told my daughters that no one knows for certain that there's a God or a heaven. I always thought that was the beauty of faith -- that it rests on our willingness to believe in the things we can't prove, to consider, when we look up at the stars or contemplate the elegance of a DNA sequence, the possibility of a higher architecture. I hope that my daughters will find contentment and community in their religion. But I would rather they grow up to be kind, generous unbelievers than sanctimonious, blindly dogmatic Christians.

At the end of "The Golden Compass," the witch Serafina foretells of a coming war, one that will affect everyone. The stakes, she says, are nothing less than our free will. Coincidentally, not long ago Lucy came home from Sunday school, bursting to tell me the story of Adam and Eve. "The snake made the woman eat an apple," she said cheerfully, "and that's why it hurts when we have babies."

"Yeah, maybe," I replied, with all the restraint in my arsenal. "But maybe the story is about something else." Maybe, I told her, it's about the point in our evolution when we got our souls. When we started using reason as well as instinct. Because you know what makes us human? Our ability to make our own choices. I told her that I don't believe in a God who kicked us out of paradise to punish us. I believe in one who put us in a world of wonders, to challenge us to figure it out.