Despite recent claims otherwise, the White House has rebuffed negotiations with Iran at every turn -- a major strategic blunder. 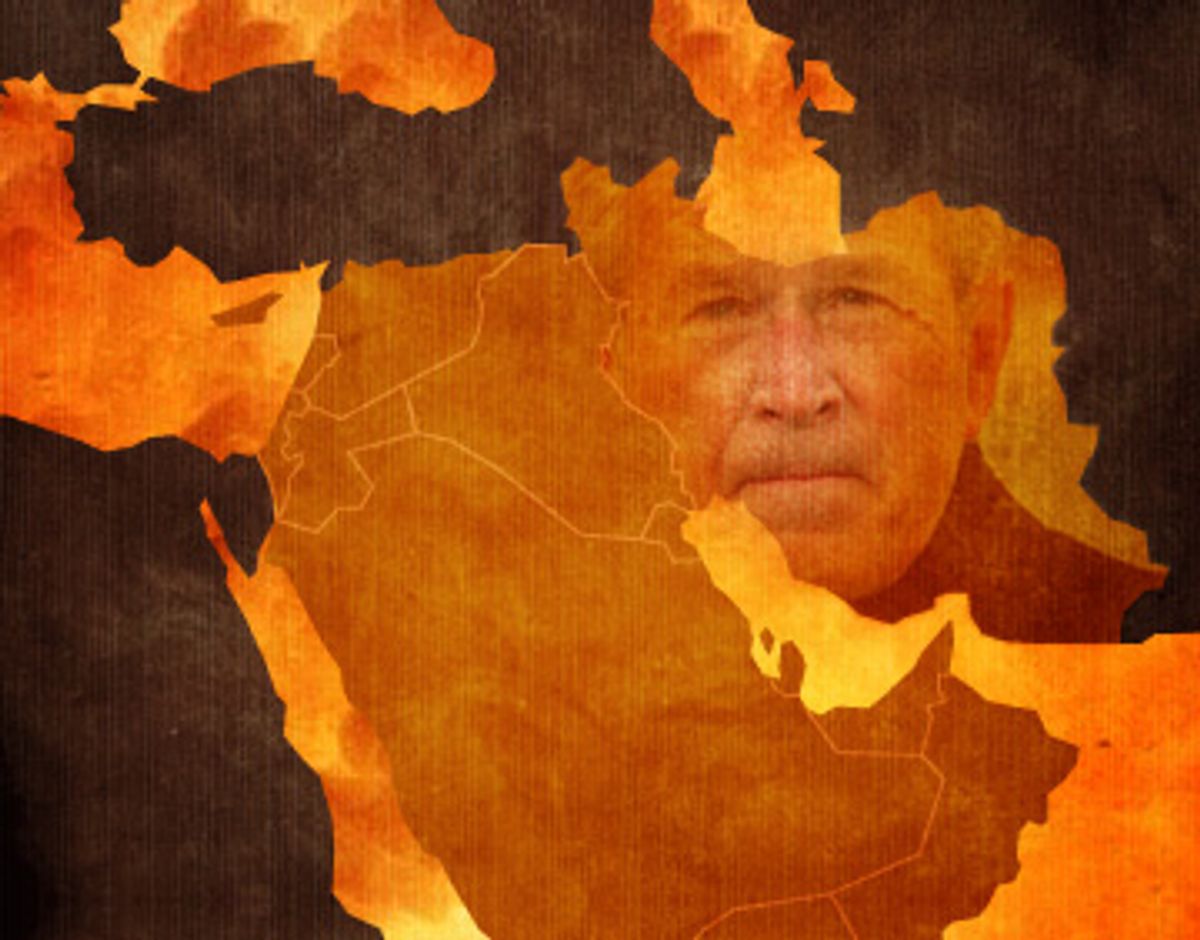 The latest National Intelligence Estimate on Iran's nuclear program raises questions once again about the Bush administration's veracity in describing a nuclear threat. But President Bush's worst misrepresentations about the Iranian nuclear issue do not focus on whether Tehran is currently pursuing a nuclear weapons program or when Bush knew the U.S. intelligence community was revising its previous assessments. Rather, the real lie is the president's claim that his administration has made a serious offer to negotiate with the Islamic Republic, and that Iranian intransigence is the only thing preventing a diplomatic resolution.

Negotiations over Iran's nuclear activities started in the fall of 2003, initiated not by the United States, but by the "EU-3" -- Britain, France and Germany. Iran, for its part, agreed to suspend its nuclear activities as talks proceeded. But, contrary to Bush's statement at his press conference this week, the United States did not "facilitate" these negotiations. Indeed, the Europeans had launched the talks to fill a diplomatic vacuum, after the Bush administration cut off its post-9/11 dialogue with Iran over Afghanistan and rebuffed an Iranian offer to negotiate a comprehensive resolution of U.S.-Iranian differences earlier that year.

On the day the EU-3 and Iran announced the opening of their negotiations, one of us was in Paris, meeting with a senior advisor to then-French President Jacques Chirac. This official said forthrightly that the point of the European effort was to "drag" the Bush administration into talks with Iran that it had refused to enter on its own. For more than two years, the Europeans tried to "drag" the administration in, but to no avail.

In the spring of 2005, in the face of European pleas for U.S. support, President Bush grudgingly approved token gestures: modifying the U.S. trade ban against Iran to permit the sale of spare parts for civilian airliners, and dropping his previous veto of Tehran's application to the World Trade Organization. But still he refused to join negotiations. Shortly thereafter, in the summer of 2005 -- before Iranian President Mahmoud Ahmadinejad took office, after Tehran had suspended its nuclear activities for almost two years -- Iran resumed nuclear development.

Finally, in 2006, faced with a breakdown in international support for sanctioning the Islamic Republic, the Bush administration reluctantly agreed to join the EU-3, Russia and China in nuclear negotiations with Iran, if Tehran would again suspend its nuclear activities. But the administration negated the impact of its decision by effectively gutting the major powers' offer to negotiate.

On their own, the Europeans had crafted an incentives "package" for nuclear talks in 2005, intended to clarify the benefits that could flow to Iran from a negotiated settlement. This package included provisions for economic and technological cooperation with Tehran. It also contained a substantial section on regional security, including offers of a security guarantee and recognition of a regional role for the Islamic Republic. But to have real significance, such offers needed to be endorsed by the United States -- Europe could not, on its own, assure Iran's security needs, especially as President Bush and other senior U.S. officials publicly challenged the Islamic Republic's legitimacy.

Unfortunately, when the Bush administration finally decided to back a multilateral offer for nuclear negotiations with Iran in 2006, it refused to endorse the incentives package unless the language dealing with regional security issues was removed. Senior British, French, German and EU officials have told us they recognized that removing these provisions would render the package meaningless from an Iranian perspective. Nevertheless, the Europeans went along -- judging that having Washington join an offer of talks with Tehran was critical to preventing a complete diplomatic breakdown, and calculating they could eventually persuade the Bush administration to support the provision of strategic incentives.

Now, some of these same officials tell us that this was a profound "miscalculation" -- the administration remains adamantly opposed to putting strategic incentives on the diplomatic agenda with Iran. And to this day, President Bush refuses to endorse statements by Secretary of State Condoleezza Rice that "regime change" is no longer part of the administration's Iran policy.

The diplomatic efforts of our European allies and other international partners to broker serious negotiations with Iran are doomed to fail until this deficit in U.S. policy is corrected. The Iranian leadership -- a collective in which Ahmadinejad is not the most powerful player -- wants a strategic "deal" addressing Iran's core interests: security, the legitimacy of the Islamic Republic, and Iran's regional role. Even with Ahmadinejad in office, Tehran has tried repeatedly -- through discussions with EU foreign policy chief Javier Solana and other channels -- to elicit some indication that Washington would be willing to consider Iran's security interests and regional role as part of a negotiating agenda, but President Bush has consistently refused to allow this. It is in this context that the significance of Bush's real lie about Iran is exposed: The Bush administration has never offered to negotiate with Tehran on any basis that might actually be attractive to the Islamic Republic's leadership.

The chances that President Bush will fundamentally change his policy toward Iran, even in light of the latest NIE, seem slim. Regrettably, opposition Democrats are not defining a genuine alternative. Beyond criticism of President Bush's "saber rattling," Democratic presidential candidates offer, for the most part, only vacuous rhetoric about "engaging" Iran. But are Democrats prepared to endorse negotiations with Iran, even if Tehran has not resumed suspension of its nuclear activities? More important, are Democrats willing to offer security guarantees to the Islamic Republic, as part of a negotiated settlement of bilateral differences? Among Democratic presidential candidates, only Barack Obama has indicated that he might be prepared to go that far, and even he has not been willing to argue consistently for a fundamental reorientation of America's Iran policy.

Yet this is precisely what the situation requires: a reorientation of U.S. policy toward the Islamic Republic as profound as the one with U.S. policy toward China effected by President Nixon in the early 1970s. At that time, China, which had tested its first nuclear weapons less than a decade before, was in the midst of the Cultural Revolution. President Nixon, however, recognized the importance of engaging a Chinese leadership that, although still headed by Chairman Mao, was prepared to formulate its foreign policy on the basis of national interest. Almost three decades after the Iranian revolution, the potential for the United States to engage the Iranian leadership on the basis of Iran's national interest -- and by doing so generate enormous benefits to America's strategic position -- remains unrealized.

Flynt Leverett, former senior director for Middle East affairs at the National Security Council, is a senior fellow at the New America Foundation.

Hillary Mann Leverett, who served as director for Iran and Persian Gulf affairs at the National Security Council, is chairman of STRATEGA, a political risk consultancy.