Nonbelievers have long been more tolerant of believers in office than the other way around. 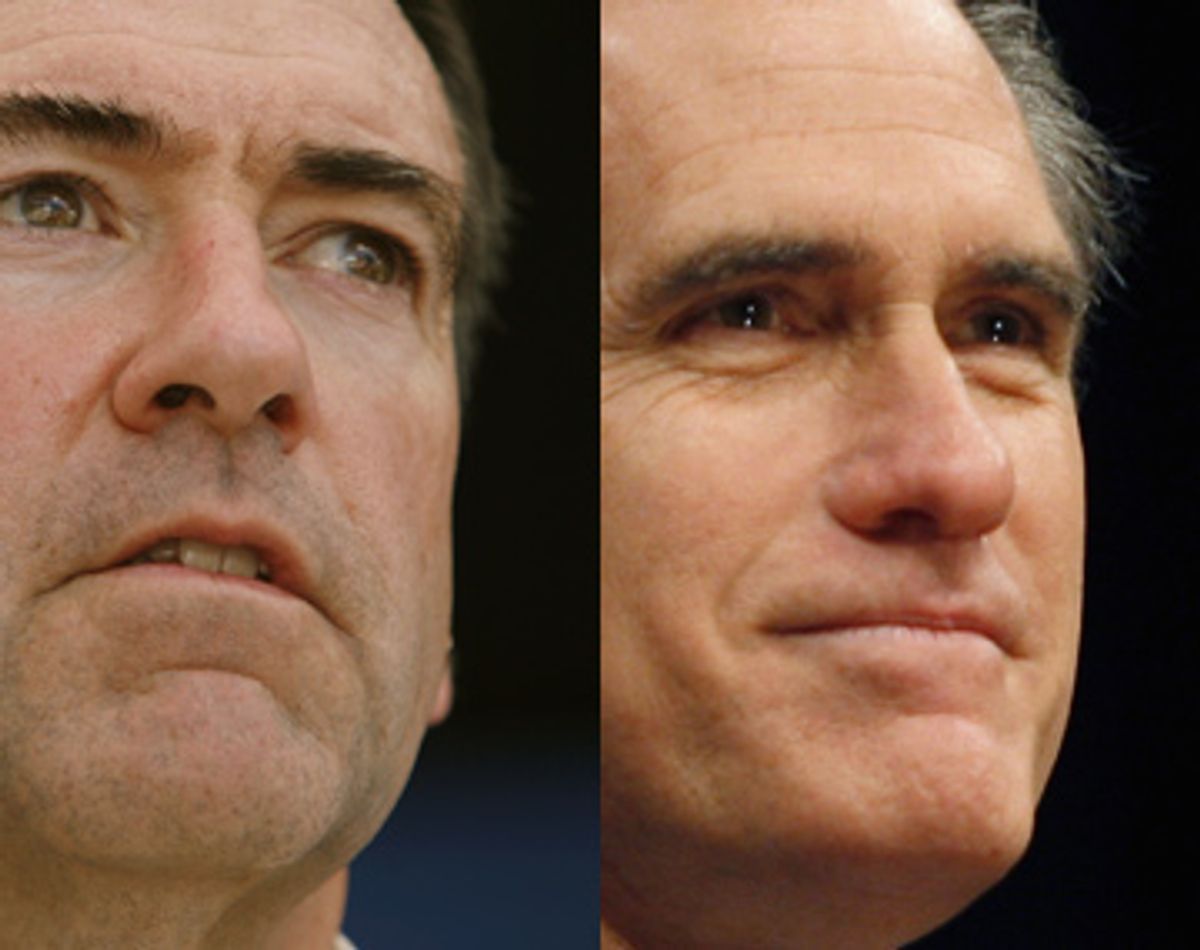 Distasteful as all the Bible thumping and ostentatious piety of the Republican presidential aspirants certainly are, the time may have come to address their religious pretensions directly, instead of turning away in mild disgust. For the truth is that no matter how often candidates like Mitt Romney and Mike Huckabee promise to uphold the Constitution and protect religious freedom, they are clearly seeking to impose the restrictive tests of faith that the nation's founders abhorred.

The most egregious offender against basic American civics today is Huckabee, who told a group of students at Liberty University, the center of higher learning founded by the late Jerry Falwell, that his sudden rise in the Iowa polls is an act of God. He compared the improvement in his political fortunes to the New Testament miracle of the loaves and fishes. He wasn't joking, as both his demeanor and his words demonstrated.

The Rev. Huckabee has proved willing to risk his oversold reputation as the "nice" evangelical with a primary strategy that draws attention to his qualifications as a "Christian leader," in contrast to the suspect Mormonism of Romney. Huckabee was honest enough not to deny that he believes the Church of Jesus Christ of Latter-day Saints is a cult -- and in fact, many if not most of his fellow Southern Baptists regard the LDS church as a satanic cult.

In response, Romney delivered an address that simultaneously pleaded for religious tolerance and urged intolerance of what he termed the "religion of secularism." The former Massachusetts governor at once declined to discuss the specific dogmas of his own faith while seeking to convince the bigots in his political party that, like them, he accepts Jesus Christ as the Son of God and his Savior. (Actually, Mormon beliefs about Jesus, which Romney insists he will not abandon, are considerably more complicated than his speech implied and bear little resemblance to the theology of orthodox Christianity.)

Whatever bland assurances they may offer to the contrary, both Romney and Huckabee have implicitly endorsed religious tests for a presidential candidacy. Both suggest that only leaders who accept Jesus Christ as Lord and Savior are qualified to lead. Huckabee says that we should choose a president who speaks "the language of Zion," meaning a fundamentalist Christian like himself. Romney says that among the questions that may appropriately be asked of aspiring presidential candidates is what they believe about Jesus Christ, a question he endeavored to answer in a way that would assuage suspicions about his own religion.

So if these two worthy gentlemen seek to exploit or extol their own faith, why should we bar ourselves from exploring the subject more deeply? They have invited a discussion of the sublime and the absurd in their religious doctrines, and of how those doctrines would influence them in office. We have already seen the destruction inflicted on America and the world by a dogmatic chief executive who believes that God urged him to wage war. (And let's not forget that Rudolph Giuliani, among others, has echoed the notion that President Bush was divinely chosen and inspired.)

We can begin with Romney's speech Thursday, in which he declared, as Joan Walsh noted with alarm, that there can be no liberty without faith. "Freedom requires religion just as religion requires freedom ... Freedom and religion endure together, or perish alone."

This statement is so patently false that it scarcely deserves refutation. If Romney has studied the bloody history of his own church, then he knows that the religious fervor of its adversaries drove them to deprive the Mormons not only of their freedom but their lives, and that the Mormons reacted in kind. If he has studied the bloody history of the world's older religions, then he knows that the most devout Christians of all sects have not hesitated to suppress, torture and murder "heretics" throughout history. Only the strictest separation of church and state has permitted the establishment of societies where freedom of conscience prevails -- and those freedoms are firmly rooted in societies where organized religion has long been in decline.

Surely Romney knows that Mormonism, in particular, was historically hostile to liberty for blacks as well as women. The founders of his church believed that God had cursed the world's dark-skinned people. They rejected abolitionism and later the civil rights movement. And their acceptance of full membership for African-Americans in the LDS church dates back only 30 years.

If Romney is going to attack humanists and secularists as "wrong," then let him explain why they were so far ahead of his church on the greatest moral issues of the past half-century.

As for Huckabee, let him answer a few pertinent questions about his faith, too. Does he actually believe in creationist dogma that insists the planet is less than 10,000 years old, and that humans once walked with dinosaurs? How would that loony idea influence his science policies as president? Is he a believer in "end times" eschatology, which holds that American foreign policy should be shaped by the coming Armageddon in the Middle East? Would he apply the harsh punishments of the Old Testament to biblical sins such as homosexuality and adultery?

Phonies like Huckabee and Romney complain constantly about the supposed religious intolerance of secular liberals. But the truth is that liberals -- including agnostics and atheists -- have long been far more tolerant of religious believers in office than the other way around. They helped elect a Southern Baptist named Jimmy Carter to the presidency in 1976, and today they support a Mormon named Harry Reid who is the Senate majority leader -- which makes him the highest-ranking Mormon officeholder in American history. Nobody in the Democratic Party has displayed the slightest prejudice about Reid's religion.

Liberals and progressives have no apologies to make, or at least no more than libertarians and conservatives do. Cherishing the freedoms protected by a secular society need not imply any disrespect for religion. But when candidates like Romney and Huckabee press the boundaries of the Constitution to promote themselves as candidates of faith, it is time to push back.