The TV host accompanies her chosen candidate to South Carolina as Barack Obama closes on Hillary Clinton in the polls. 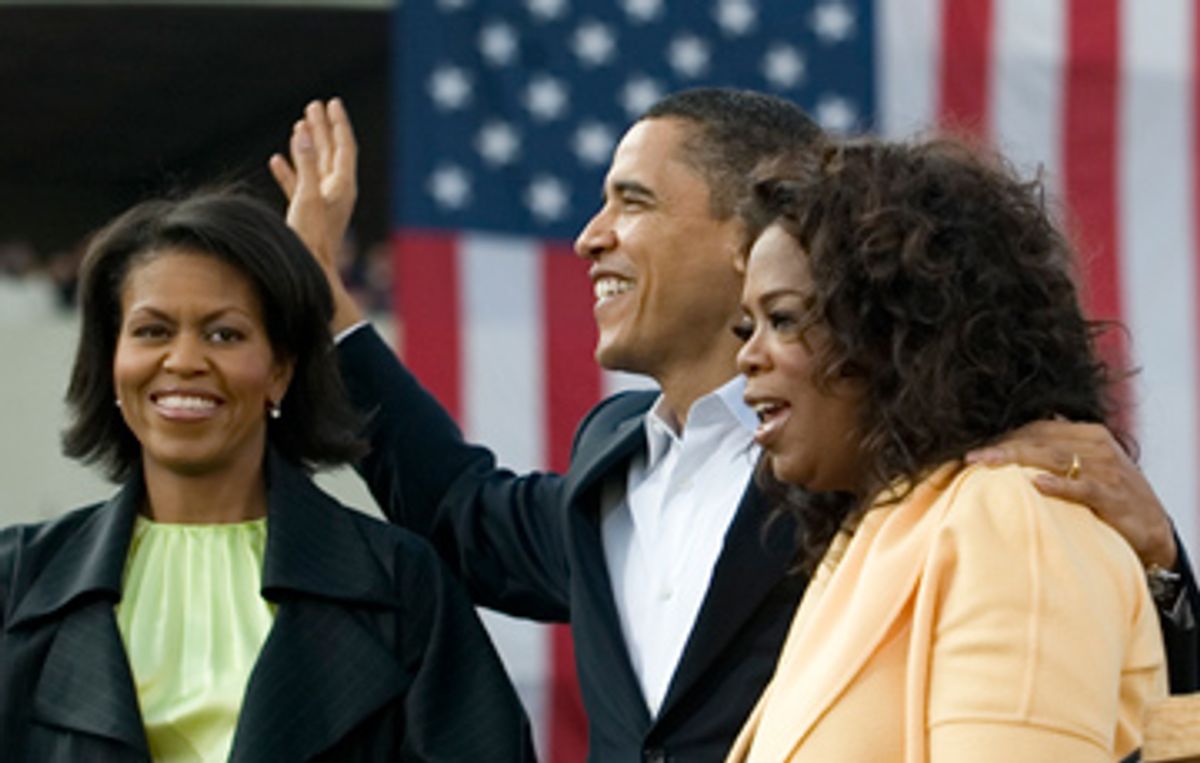 On a springlike Sunday afternoon, talk show host Oprah Winfrey told the huge, cheering and overwhelmingly black crowd in the University of South Carolina's football stadium that they didn't need to wait.

"There are those who say it is not his time -- that he should wait his turn," said Winfrey, harking back to messages older listeners might have heard during the civil rights movement. "Think of where you'd be in your life if you waited."

Smiling widely as he took the stage, Barack Obama thanked Winfrey for the introduction and told the rapt audience, 29,000 strong: "South Carolina, our moment is now."

The Columbia event was the third in a four-stop weekend tour of three key primary states for Obama, his wife, Michelle, and Winfrey. The trio appeared Saturday in Des Moines and Cedar Rapids and then held a final rally in New Hampshire Sunday night. The stops in nearly all-white Iowa and New Hampshire drew as many as 18,000 and demonstrated the trans-racial appeal of both the candidate and his most famous backer, who has jumped aboard Obama's campaign just as he pulls even with front-runner Hillary Clinton in some polls.

The South Carolina event, however, was by far the biggest of the tour, and hints at what might await Clinton in South Carolina, where blacks will cast more than half of all ballots in the Jan. 26 Democratic primary. A statewide poll released before the event showed that Clinton's lead over Obama had already shrunk to just three points.

On Sunday, Obama's team was trying figure out just how big the Columbia event was. Staffers couldn't confirm whether it was the largest ever for a nonincumbent presidential candidate prior to the start of the formal primary season. Dick Harpootlian, former Democratic Party state chairman and an Obama supporter, added that Sunday's turnout far eclipsed the estimated 10,000 people who showed up for a Bill Clinton rally in South Carolina in October 1992, well after he'd secured the presidential nomination. Advance demand for Sunday's event had been so strong that the speech had to be moved to Williams-Brice Stadium from the original venue. "When I say this is unprecedented in South Carolina politics, that's not even a strong enough word," Harpootlian exclaimed. "If I were Hillary Clinton I'd be looking at this as the canary in the coal mine."

Much of the draw Sunday was certainly due to the presence of the most famous black woman in the world. In the past, Winfrey has refused to endorse presidential candidates. From the stage in Columbia, she used church imagery to explain to attendees -- many of whom had come to the event straight from church themselves -- why she decided to forgo her traditional neutrality and endorse Obama.

Neither Winfrey nor Obama ever mentioned Hillary Clinton's name. But Winfrey dinged the former first lady by raising the issue of the decision to invade Iraq. "He stood with clarity and conviction against this war in Iraq," she said of Obama. "It's time now for a president who stands on conviction."

As recently as September, Clinton held a 23-point lead over Obama in South Carolina, much of it due to her husband's residual popularity among African-Americans. Winfrey's message that blacks no longer need to wait, however, comes as Obama's support among black South Carolinians has surged. And the appeal of Obama's newest celebrity backer seems pitched directly at the state's Democratic electorate, and at the throngs of hat-wearing church ladies in Sunday's audience. Thanks to their higher turnout rates, African-American women alone may constitute as much as 35 percent of all voters in next month's primary.

Regardless of whether attendees came to see the talk show host or the candidate, many came from far away. During a walk through the parking lot before the event, a random survey of 100 cars revealed 22 out-of-state license plates, including a combined 15 from neighboring North Carolina and Georgia. This was a local event with regional and national implications, and the Obama campaign was prepared to capitalize on the crowds.

Obama spokesman Ben LaBolt said 2,307 South Carolinians signed up online to volunteer for the event, 68 percent of whom had never communicated with the campaign before. More than four hours before the event began, campaign staffer Kevin Puleo instructed volunteers on how to shepherd attendees, who were given tickets only after filling out a volunteer card, through security and into the stadium. "What's your last name?" Puleo shouted to volunteers. "Obama!" the corps of volunteers shouted back, on cue.

As they entered the stadium, attendees were handed a list with four registered voters' names and phone numbers on it. After two hours of warm-up entertainment headlined by hip-hop group Arrested Development, and before Winfrey's appearance, Obama staffers asked audience members to use their phones to call voters to persuade them to support Obama.

Though the crowd was disproportionately African-American, the first person in line was Justin O'Rear, a white, 18-year-old recent high school graduate who left his Gilbert, S.C., home at 4:30 a.m.; he arrived by 5:15 a.m., before campaign staffers had even posted the handmade "Line for Change Starts Here" banner at the head of the line where O'Rear waited six hours until the gates were opened. Working for a year while he figures out his college plans, O'Rear said he supports Obama because, "as a minority, he can better understand the little person."

Senior and Darlene Lewis drove 50 miles from Bishopville, S.C., with seven of their 12 children, ages 6 to 19, in tow. "I brought them because I believe this is history," said Darlene Lewis, who considers herself a big fan of Winfrey's. "I always say she helped me raise my 12 children." When I asked the African-American couple if they thought Obama could win the White House, Senior Lewis expressed wariness. "I'm not sure," he said.

But then his wife piped in: "I'm not sure either. But it's possible -- it's possible." That's precisely the message Winfrey came to deliver.