An interview with Leonard Nimoy, whose new photography book, "The Full Body Project," brings Rubenesque nudes back into contemporary art. 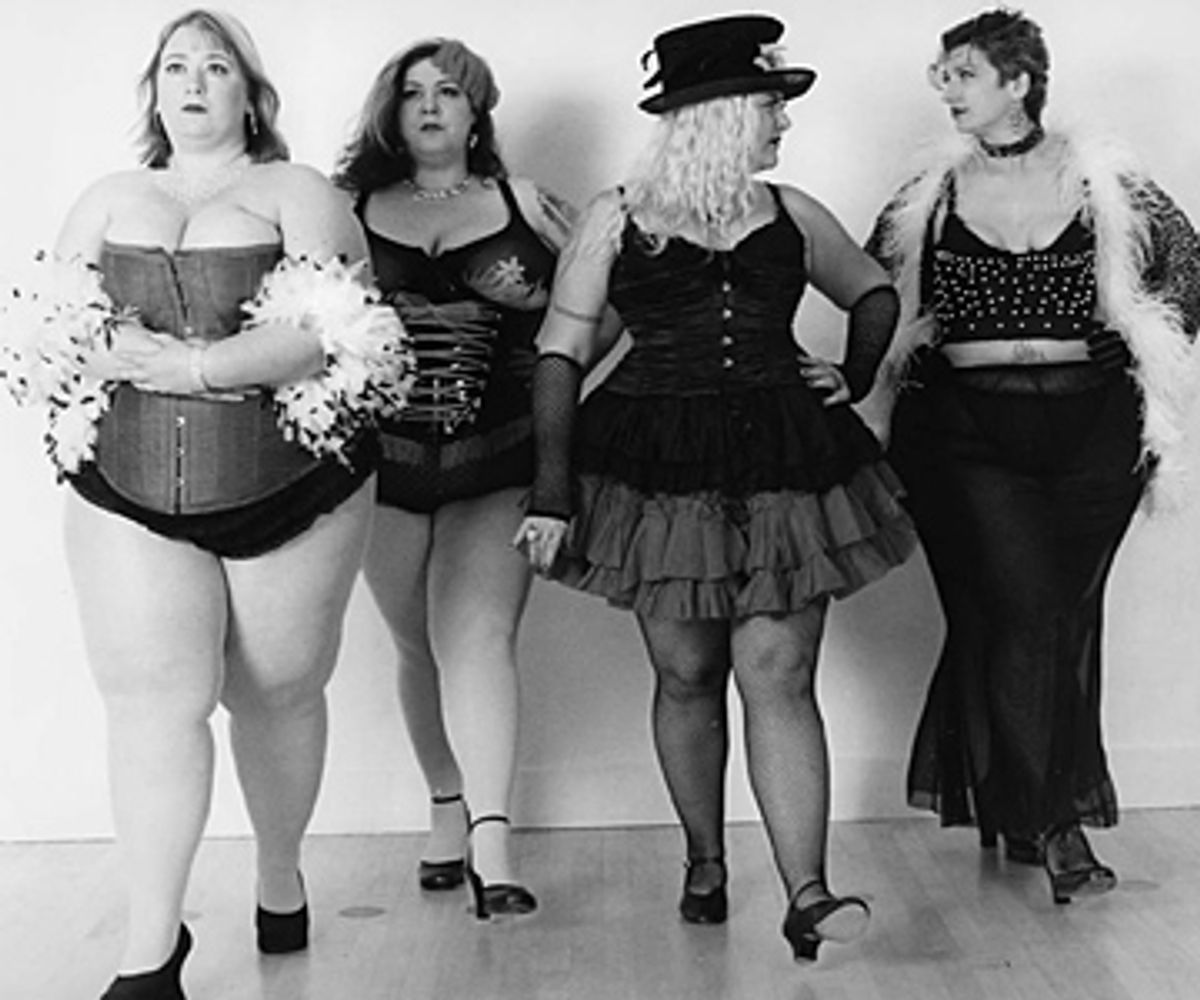 William Shatner seems perfectly content spoofing his iconic status in Priceline commercials, but for Leonard Nimoy, life after "Star Trek" has been a more solemn existence. The man who would rather you not call him Spock has, for decades now, immersed himself in music, poetry and fine art. His new book "The Full Body Project," is an arresting collection of black-and-white nude photographs featuring full-bodied women who stare into the camera, practically daring us to judge them on their nakedness or their size. Nimoy is one of the few contemporary artists (another would be British artist Jenny Saville) working with full-figured models these days. With its references to artists from Matisse to Herb Ritts, "The Full Body Project" recalls a rich history of zaftig women in art at the same time it reminds us of their current absence. Indeed, "The Full Body Project" could be read as a critique of Hollywood -- or at least the glamour machine that runs on size 2 supermodels.Salon spoke recently with Nimoy about how he became fascinated by female body image, the decade and a half he spent working as a photographer, and how he made Joy Behar feel svelte.

Where did "The Full Body Project" come from?

I was doing a seminar with some earlier work, and a lady in the audience came up and said, "I'm a model, and I'm a different body type than what you've been working with. Would you be interested in working with me?" I discussed it with my wife, who is very much involved in what I do and very much involved in contemporary art -- she's a trustee at the Hammer Museum in Los Angeles. She encouraged me to go ahead and do it. I was concerned with how to photograph this kind of figure because I simply was not used to it. I shot her in black-and-white. I was quite satisfied with what I got, because I thought she looked like a marble sculpture in black-and-white.

I began to become conscious of this question of body size and body image in our culture. I became more aware of what we're bombarded with in magazines, newspapers and television commercials -- "Lose 10 pounds in three weeks! Eat and be thin!" It's incredible if you stop and think about it. I found this burlesque group in San Francisco called the Fat-Bottom Review. I made arrangements to photograph them in San Francisco and then again in Los Angeles.

Did the fact that you were photographing burlesque performers, who probably have strong personalities and a great deal of confidence, influence the project?

It made it very easy for them to be photographed. They're comfortable with their bodies and they are performers, so once I gave them some direction, they were able to get to it very comfortably. We had a terrific time. There was music playing, there was dancing. They were joyous, and they were comfortable. They're a terrific bunch of people.

No matter who my models are, I don't work sexually. I'm not thinking sexually. I'm thinking about concept, lighting and composition. If it comes off sexually, so be it. That's up to the viewer. But I believe I'm not objectifying these women. Objectifying [occurs] when you put forth a figure of a woman that's intended to titillate and be seductive. I don't do that.

As you mentioned, in some way these portraits were uncharted waters for you --

And uncharted waters for the viewer.

Yes, but despite the unusual subject and form, the work seems very referential.

Yes, definitely referential. I use classic images and contemporary iconic images as a starting-off point. There's a very famous photograph by Herb Ritts of five famous fashion models sitting nude on the floor. I sent that photograph to the group in San Francisco and said I wanted to replicate it with them. I also sent a Helmut Newton diptych of four models walking toward the camera -- one side in high-fashion clothes and the other totally nude. I started with those as jumping-off points. The second time I photographed [the burlesque performers], I sent them images of Matisse's "Dance," Marcel Duchamp's "Nude Descending a Staircase" and "The Three Graces," which was done by many artists, including Raphael about 500 years ago. These became iconic references for us. [It was] intriguing to find out what a different contemporary approach to those images might look like.

Which other artists were reference points for you?

The development of ideas came from the project itself, not from inspiration from other photographers or artists. I thought, "OK I've got these women to shoot. Now what would be interesting to do?" I think the first impulse I had was the Herb Ritts photographs, because that was so much about fashion models of a body size and shape that is sold as the ideal. Once I latched on to that, then the rest of it came --the Helmut Newton, Matisse, Duchamp and the Raphael.

And what did you end up learning about the ideals of female beauty?

The great thing for me about working in the arts, whatever the endeavor is and especially in this work I've been doing with photography for the past 15 years, is the educational process. As soon as I get in touch with a concept that intrigues me, I suddenly find information exploding all around me. You pick up messages like vibes in the air. I could have gone my whole life without paying much attention to the question of body image and what women are experiencing. This particular project has put me richly and intensely in touch with this cultural question of beauty. Women are being sold a concept of beauty. In other countries and at other times, and even in this country at other times, a robust woman was considered beautiful. In other countries, these women would be considered affluent.

My grandmother grew up with that idea, that larger weight signaled affluence. We're only a few generations removed from those standards of beauty. But, in light of medical concerns about obesity, how do you respond to those who would say your subjects are unhealthy because of their weight?

I'm concerned about the health issues, but there are mixed messages right now. It's clear obesity has its dangers. Diabetes is a possibility. Heart trouble is a possibility. Knee problems from carrying the weight. But then again, there was a medical report that came out just a couple weeks ago saying people with additional poundage are less likely to get certain diseases. Then there's the alternative question about anorexia and bulimia. Look, the fact is that young girls 12 and 13 are already becoming disenchanted with their bodies. They're looking in the mirror and struggling to achieve something that, for many of them, is unattainable. You're born with the body that you're born with, and you can work and diet all you want, and for many women, it's still unlikely you'll attain the look that advertisers say you should.

What do you expect the average art audience will learn or take away from this project?

I didn't set out to teach anybody anything with this work. I set out to explore a cultural phenomenon. If it creates conversation, if it creates discussion, that's fine. Some women have told me they feel liberated by these photographs. I'm very happy to hear that. Joy Behar, from "The View," held this book up and said, "These pictures make me feel svelte." I love that. I think it's wonderful.

Most people are just now learning about your photography. When did you become interested?

I became enchanted with photography when I was about 13 years old. I still have the family camera that I used in the early 1940s. I still have a photograph I took of my grandfather that I printed myself in 1943 or 1944. So that photograph is over 60 years old. In the early '70s I went back to school to study photography seriously at UCLA. I had finished "Star Trek" and a couple years on "Mission: Impossible." I was looking at the possibility of changing careers. I decided that I didn't want to do commercial photography, I wanted to do fine art photography. I had a very interesting teacher, Robert Heineken, who's legendary in photography circles. He taught me about conceptual photography: "Why are you taking these pictures?"

The previous book that I did, "Shekhina," was about the feminine aspect of God and was based on Jewish mythology. Both books, interestingly enough, are about the empowerment of women.

You've transitioned between so many artistic media. Do you have a consistent audience?

I can see how having iconic status in one area could be both blessing and a curse.

Nicole Pasulka runs the "Galleries" section for The Morning News.