The GOP's field of dreams 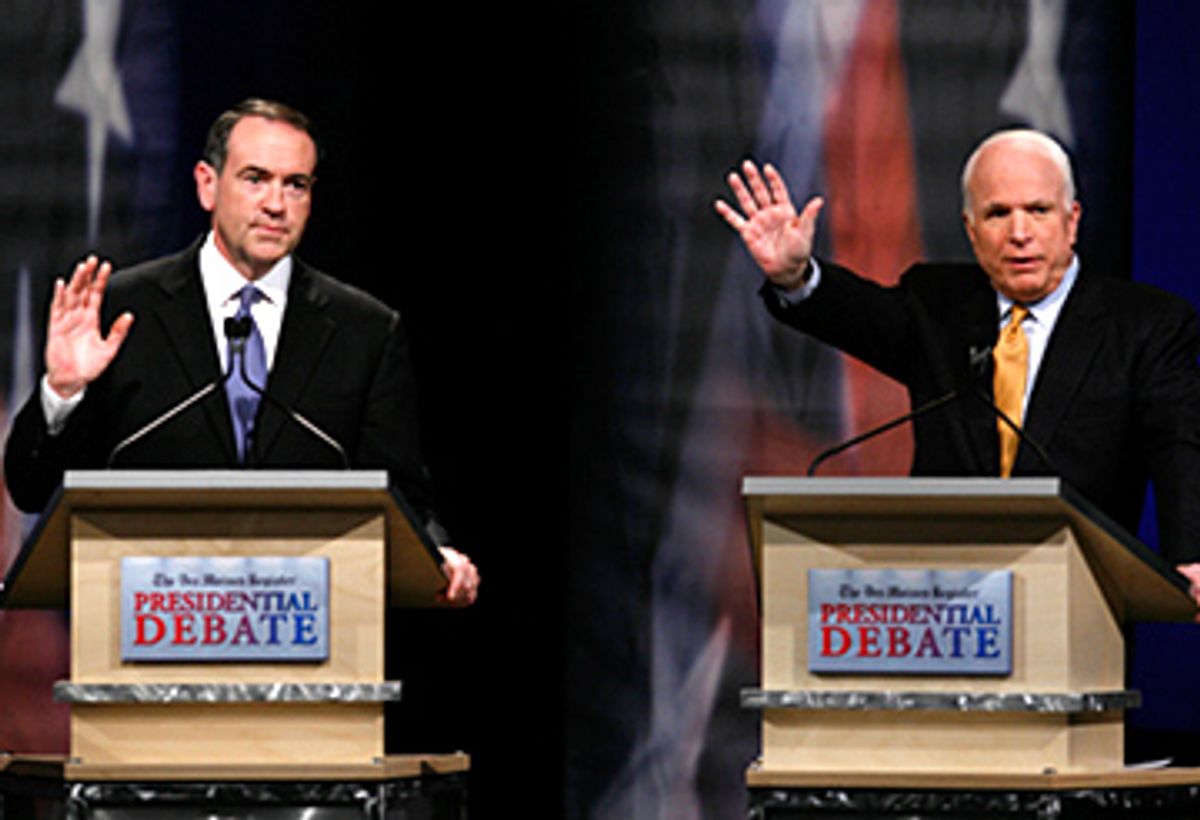 The front-page headline in Wednesday morning's Des Moines Register ballyhooed, "Last debates could have 'seismic impact.'" But the final Republican face-off before the Jan. 3 caucuses had, in truth, all the seismic impact of an acorn dropping languidly into a lake. The slamming of an ice-caked garage door opener probably would have provided a bigger bounce than the 90-minute Wednesday afternoon session sponsored by (surprise) the Des Moines Register.

Little more than three weeks before the caucuses even a nothing-burger of a debate becomes eventful. Nothing occurred to dethrone the up-from-nowhere Iowa front-runner Mike Huckabee, who is suddenly appearing on more magazine covers (Newsweek, this coming Sunday's New York Times Magazine) than Nicole Kidman. As veteran Republican consultant Charlie Black, now working for John McCain, put it after the debate, "The biggest thing that happened is that nobody laid a glove on Huckabee." Even the former Baptist preacher and Arkansas governor seemed surprised by the mild-in-the-streets debate, saying on CNN, "I was kind of anticipating there would be blood on the floor -- most of it mine. And fortunately, I came out without a Band-Aid."

The self-made candidate from Hope, Ark., did not need a cut man in his corner partly because debate moderator Carolyn Washburn, the editor of the Register, decreed from the outset that there would no questions on immigration (the subject of a new attack ad by Mitt Romney) nor Iraq (a topic that might have underscored Huckabee's kiddy-pool grasp of foreign policy). Any possibility of sustained questioning was also undermined by the camera-hogging presence onstage of Alan Keyes, a Republican perennial candidate whose latest accomplishment was losing the 2004 Illinois Senate race to Barack Obama by a nearly 3-to-1 margin.

The real danger for high-flying Huckabee comes from self-inflicted wounds. After the debate, Huckabee pointedly apologized to Romney for repeating the charge in the forthcoming Times Magazine profile that Mormons believe that Jesus and the devil were brothers. But Huckabee has yet to convincingly explain why more than a day after the bombshell National Intelligence Estimate was released (concluding in strong terms that Iran had abandoned its nuclear weapons program) he expressed total ignorance of the topic when questioned by reporters. Not to get too picky, but isn't glancing at the news headlines once a day (or being briefed on them) the minimal qualification for a presidential candidate?

Besides Keyes, the other new candidate in the debate was a self-confident, high-energy fellow named Fred Thompson, who bore only the faintest resemblance to a former senator of the same name whose campaign style up to now has been lassitude on a slow day. It may be too late to make a difference in either the polls or fundraising, but the actor-politician appeared to be -- for at least one afternoon -- what Tom Wolfe would call "A Man in Full."

Thompson's breakthrough came when Washburn attempted a moderator's time-saving gimmick by asking for a show of hands of the candidates who believe that global climate change is real and man-made. Like a political Howard Beale who is mad as hell at cheap debate tricks, Thompson said firmly, "You want a show of hands. I'm not giving it to you." What seemed to provoke Thompson was not global warming, but the frustration of being constantly required to reduce complex questions to yes-no answers and 30-second sound bites.

The Romney campaign has been arguing for the last two weeks that Huckabee's rise to the top of the Iowa polls has been partly due to Thompson so woefully underperforming as a candidate. Under this Romney-centric calculus, if Thompson were to make a late surge, it would probably come at the expense of Huckabee. Similarly, Rudy Giuliani -- who is battling Romney for supremacy in New Hampshire -- cannot help being overjoyed that Huckabee may body slam his nemesis in Iowa. John McCain, who had a flat debate performance Wednesday, could still win the nomination John Kerry-style as the last man standing.

Yes, these kinds of calculations can be dizzying even for those of us who are covering the 2008 presidential race. It is hard not to escape the bizarre arithmetic of the low-turnout Republican caucuses (which are little more than a gussied-up straw poll), which could be won by a candidate collecting 25,000 or 30,000 votes. What that means is that a candidate could still rise from oblivion if he started corralling roughly 1,000 new supporters per day. Small wonder that John McLaughlin, Thompson's pollster, was wandering the debate's press room armed with a sheaf of charts (from the 1996 and 2000 GOP races and the 2004 Democratic contest) showing how dramatically the horse-race numbers have moved in the final days before the caucuses.

Romney has entered uncharted waters (or perhaps, given Iowa, cornfields) with his attack ad, complete with an ominous voice-over challenging Huckabee for supporting in-state tuition benefits in Arkansas for "illegal aliens." In a multi-candidate contest, often it is the innocent bystanders who benefit when a desperate contender goes negative. (In 2004, a televised knife fight between Dick Gephardt and Howard Dean cleaved a path for Kerry and John Edwards to dominate the Democratic caucuses.) That may be why Romney went out of his way to be Mr. Positive Wednesday, letting his TV commercials do the dirty work, while in public he mouthed platitudes like, "This is not a time for us to wring our hands and think that the future is bleak. In fact, the future is bright."

But the candidate under the microscope in Iowa is Huckabee. Is it a stroke of genius that Huckabee -- facing incoming fire for sensible moderation on immigration -- is suddenly trumpeting the endorsement of Jim Gilchrist, the founder of the protect-our-borders vigilante group the Minutemen. Or is it an early sign that beneath Huckabee's affable veneer beats the cynical heart of another political operator? At least Huckabee is in the enviable position of not having his halo dented by another debate before the Iowa vote.