The Democrats have their final pre-caucus debate, and it's just as dull as Wednesday's Republican dud. When Mike Huckabee tells Elizabeth Edwards a debate is boring, it's boring. 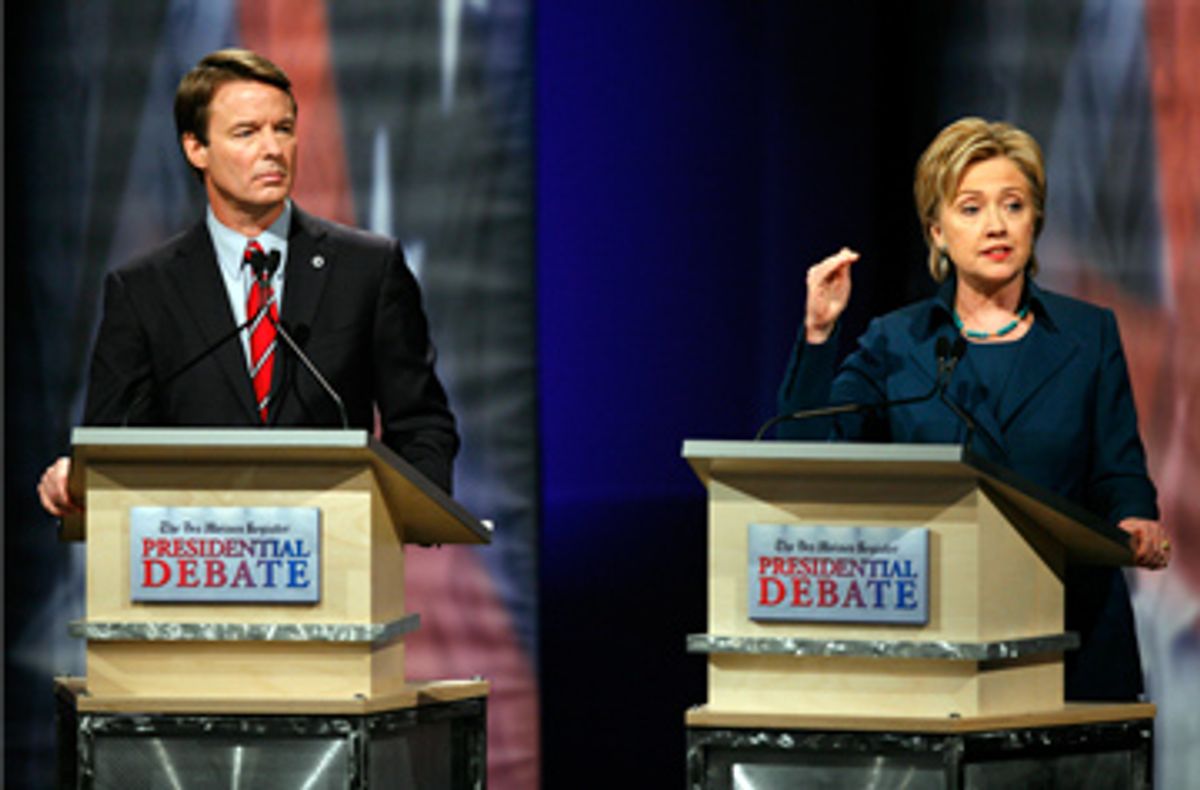 When Elizabeth Edwards arrived at the private jet terminal here Thursday morning for the last Democratic debate before the Iowa caucuses, she ran into Mike Huckabee waiting to take off after having survived Wednesday's Republican face-off. Chatting with the Iowa Republican front-runner, she asked what to expect, since both debates, sponsored by the Des Moines Register, had the same moderator. Huckabee responded with an impolitic but on-target description: "It's pretty boring."

With America locked in pit-bull political polarization, there are few topics that can unite the parties other than a shared agreement that both Des Moines Register debates were duds. The mid-afternoon Democratic main event was less a clash of issues and images than an opportunity for all six candidates to recite their favorite lines from their stump speeches and TV commercials. It was déjà vu time even though the caucuses are still three weeks away.

To anyone who has been listening -- and that group decidedly includes Iowa Democrats who plan to attend the caucuses -- there was little that was new. Hillary Clinton, practicing the politics of empathy, talked about how Iowans "feel as though they're standing on a trap door. They are one pink slip, one missed mortgage payment, one medical diagnosis away from falling through." Barack Obama called the struggle to halt global warming "a moral imperative." And John Edwards brandished a disarming smile as he railed against "corporate power and greed."

A long-term ripple effect from a debate can be significant even if the reporters huddled in the press room are baffled about what should be the headline of the day. But monitoring Thursday's 5 p.m. local newscasts on WOI (ABC) and KCCI (CBS) failed to reveal a sound-bite consensus. The only memorable line shown at the top of the hour on either station was Bill Richardson's paean to the first caucus state: "What I like best about Iowans is that you like underdogs. And you like to shake things up. You don't like the national media and the smarty-pants set telling you who's going to be the next president."

Audible on the tape of Richardson's "underdog" crack was Clinton's signature laugh. But judging from the news coverage of her own campaign on WOI, Clinton may have little to laugh about. The debate recap segued into an ABC report about divisions in the Clinton camp over whether to become more aggressive toward Obama and Edwards. This was followed by the news that Bill Shaheen, the husband of former New Hampshire Gov. Jeanne Shaheen, resigned as national co-chair of the Clinton campaign after suggesting that Obama's youthful cocaine usage would be a political liability if he were the nominee.

This summary of Des Moines TV coverage underscores the reality that debates do not exist in a vacuum -- they become quickly embedded in larger campaign narratives, such as this week's dominant story line: "Hillary in trouble." Viewership of Thursday's debate -- which was slated to be broadcast live on CNN, MSNBC and Fox News -- was undoubtedly reduced by competition from George Mitchell's press conference on baseball's all-star (and, more accurately, all-scar) steroids scandal.

Even though it was glossed over in the early news coverage, Clinton tried to showcase in the debate what may be her final argument to a skeptical jury of Iowa voters. "Everyone wants change," she said, invoking the 2007 Democratic mantra. "Everybody on this stage has an idea about how to get change. Some believe you get change by demanding it. Some believe you get it by hoping for it. I believe you get it by working hard for change. That's what I've done my entire life. That's what I will do as president."

Former Iowa Gov. Tom Vilsack -- a short-lived presidential candidate and now Clinton's leading supporter in the state -- highlighted the center-ring role of this rhetorical formula about "change" by repeating it almost word-for-word during an interview after the debate. When I suggested that the hoping-for-change candidate just might be Obama, Vilsack said with a laugh, "You've figured it out." And Edwards, of course, is the Democrat demanding change -- or as Vilsack put it, "He's the angry guy."

Edwards, in truth, had a strong debate by using every question as an opportunity to repeat his argument that we need a president dedicated to opposing the special interests because "corporate power and greed have literally taken over the government." Obama, who has been riding high in the recent polls, seemed confident and relaxed throughout the debate, though I must confess that I cannot remember (without reviewing the transcript) a single thing that the Illinois senator said onstage during the entire 90 minutes except for his already oft-repeated quip that Hillary Clinton will be advising him in 2009.

Former Democratic Rep. Dave Nagle, who is neutral in the presidential race, offered an intriguing theater review of the debate. "The second tier beat the first tier," Nagle said, boosting Richardson, Joe Biden and Chris Dodd. While Richardson did deserve plaudits for what may have been his best debate performance of the long theatrical season, Biden and Dodd were hamstrung by a shortage of questions that played to their strengths on foreign-policy issues.

While only the foolish hazard a guess about who will be crowned caucus champion on Jan. 3, it is far safer to predict that debates (especially this one) will not have dictated the outcome. There is nothing wrong with that, since this Kennedy vs. Nixon format has degenerated into a tired ritual that frequently sheds neither heat nor light. With candidate answers often restricted to 30 or 60 seconds, snobbery is about the only reason to prefer debates to TV commercials or stump speeches. So the battle for Iowa will be won the old-fashioned way -- based on what candidates say directly to voters rather than by the gimmickry or high-minded earnestness of debate moderators.