From a girl's travel diary to a newly revved-up Superman, we spotlight a dozen of 2007's most notable comics and graphic novels. 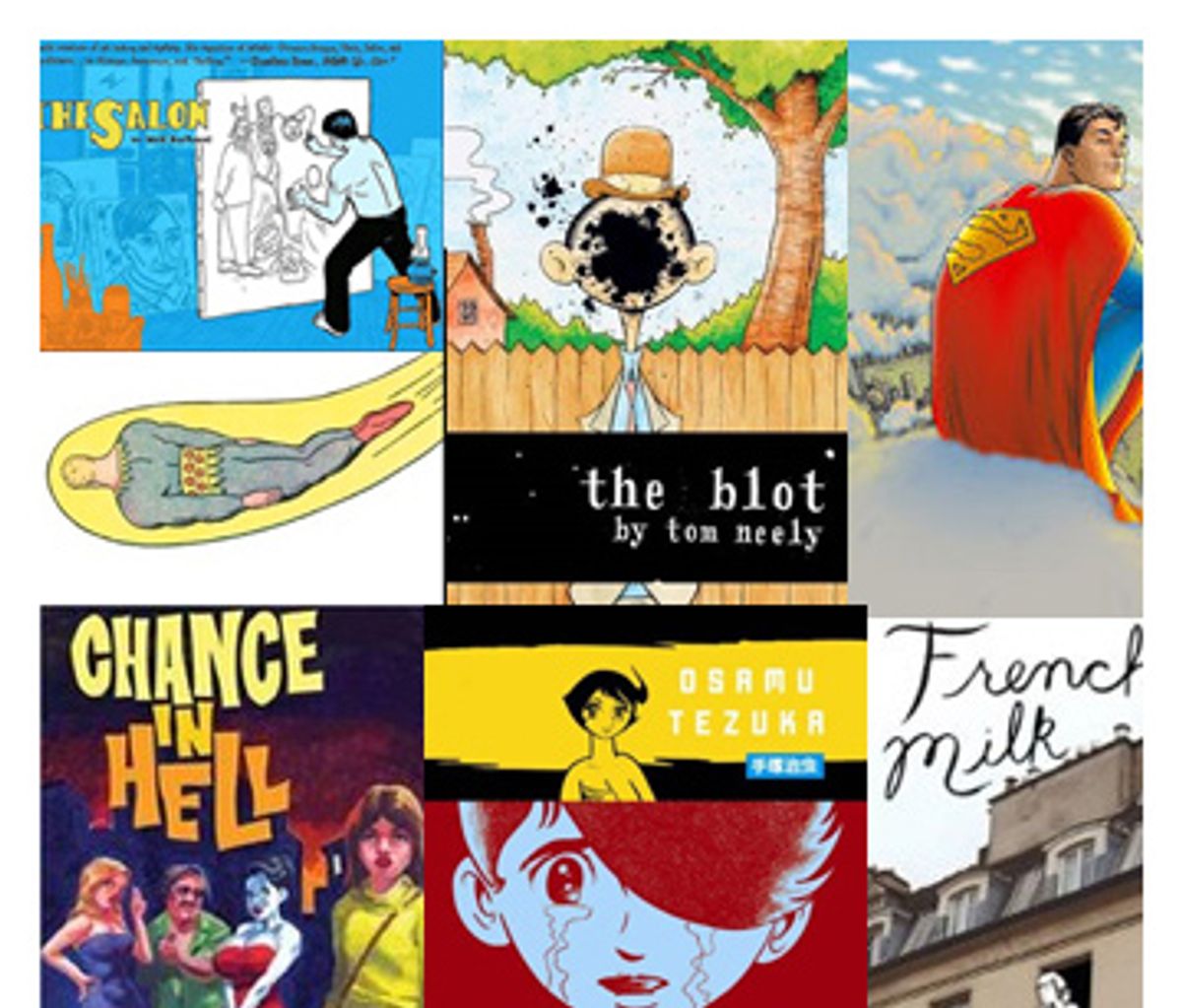 It has been a banner year for graphic novels, and although Salon reviewed some of the highlights (the conclusion of Tsugumi Ohba and Takeshi Obata's serial thriller "Death Note," Brian Chippendale's overwhelming experimental book "Ninja," Alan Moore and Kevin O'Neill's long-awaited "The League of Extraordinary Gentlemen: Black Dossier"), there were plenty of other excellent new volumes of comics. This year also saw a mountain of fancy collections of vintage cartooning -- following the success of the Seth-designed "Peanuts" reprints and art-object books like "Little Nemo in Slumberland: So Many Splendid Sundays!" the earliest years of strips from "Dick Tracy" to "Mutt & Jeff" are turning up as deluxe hardcovers. Here are a dozen notable books that would look just fine under an appropriate tree.

It's probably best known for being at the center of an infamous legal case, but Bertozzi's graphic novel is thoroughly charming in its own right -- a murder mystery/fantasy set in the Paris of 1907, where Erik Satie, Georges Braque, Gertrude Stein, a dirty-mouthed and clothing-averse Pablo Picasso and their friends discover a secret cache of blue absinthe that lets the artists who drink it travel inside paintings. Beneath the historical fun of the plot, though, Bertozzi has a lot to say about the way the modernists reinvented art's relationship to representing reality and personal experience.

"Terry and the Pirates, Vol. 1" by Milton Caniff (IDW)

The first volume in the Library of American Comics, a planned series of deluxe hardcover volumes reprinting classic newspaper strips, includes the first two years of one of the greatest daily adventure serials. Launched in late 1934, "Terry" takes a little while to ramp up: The titular 12-year-old was essentially a sidekick to a generic action hero named Pat Ryan, and the pervasive Asian stereotypes are tough to get past. (The term "dragon lady" comes from the wicked vamp who threatens our heroes for most of this volume.) In early 1936, though, Caniff introduced another femme fatale, a cigarette-smoking Mae West type called Burma, and his gifts clicked into place: vivid characters, high-contrast blasts of light and shadow, and rocket-powered pacing that yanked the plot forward with a little cliffhanger every day.

He has been flirting from a distance with the overheated drama of B-movies for years, and now the co-creator of the groundbreaking art-comics series "Love and Rockets" is adopting that mode himself. Both "Chance in Hell" and his current miniseries "Speak of the Devil" are "adaptations" of nonexistent, trashy, sexually charged drive-in flicks (with his actress character from "L&R," Fritz, playing bit parts). This one, drawn in a looser, broader version of the texture-conscious style he devised for last year's "Sloth," concerns a girl named Empress who escapes the gruesome circumstances of her childhood, until they come back to get her. If you haven't read Gilbert and his brother Jaime's extraordinary stories from the initial run of "Love and Rockets," though, start there -- they've been collected in six paperbacks this year. Gilbert's volumes are "Heartbreak Soup," "Human Diastrophism" and "Beyond Palomar"; Jaime's are "Maggie the Mechanic," "The Girl from H.O.P.P.E.R.S." and "Perla La Loca."

The 22-year-old Knisley's first full-length book is her drawn diary of a six-week trip to Paris with her mother: a keenly observed letter back home, in effect, with lots of interpolated photographs and sketches of everything in her environment. Its scope is deliberately small, but the pleasure Knisley takes in food and company is infectious, and she's as conscious of her own perceptions and how she's communicating them as she is of the world around her.

"I Shall Destroy All the Civilized Planets!" by Fletcher Hanks (Fantagraphics Books)

Hanks' career in comics was short -- 1939-1941 -- but he may have been the most bat-shit insane cartoonist to ever wield a pen. Stardust the Super Wizard, Fantomah the Mystery Woman of the Jungle and the other stars of the short stories collected here (by editor Paul Karasik, whose biographical conclusion is sad but illuminating) are basically just props for Hanks' obsessions: catastrophes described in compulsive detail, super-scientific rays, poetic justice and images that brand themselves on readers' retinas. His sense of composition was phenomenal; his grasp of anatomy and linear logic was virtually nonexistent. But almost every panel here feels as if it has been rescued from a majestic nightmare.

The kids who read Harvey Kurtzman's war comics in the '50s grew up to be the conscientious objectors of the '60s. Originally published by the cult-favorite EC Comics line at another time when America reveled in military rhetoric, and now reprinted in handsome hardcovers (this second volume is where the series really took off), "Two-Fisted Tales" was a collection of short stories set in conflicts from the American Revolution to the then current Korean War. Kurtzman's comics (drawn by an all-star team including Wally Wood and John Severin) might've looked like flag wavers from a distance, but they portrayed war as not only inglorious but hopeless, meaningless and endlessly horrible. More than 50 years later, stories like "Corpse on the Imjin" are still shocking.

The 43 Spider-Man comic books that Ditko drew between 1962 and 1966 have been reprinted countless times before, but this thousand-page-plus volume contains all of them, and it looks and feels like the canon it is. (As a bonus, it includes the original issues' letter columns -- a few of the readers who wrote in, like Donald McGregor and Steve Gerber, went on to write comics themselves.) Ditko drew Spider-Man as a frail teenager in a Manichaean world of grotesque horrors and petty humiliations; Lee reinvented the language of superhero comics as a jazzy, glittering trail of wisecracks and melodrama. It's primal, brutal, brilliant stuff -- the story of a hero propelled by a guilt so overwhelming he'll never be free of it -- and you can practically feel the heat of Lee and Ditko's ideologies clashing.

The best superhero series running right now makes the 70-year-old Superman franchise seem bracingly fresh again, and its secret is that it goes back to first principles: the idea that a Superman comic should be pure joy from start to finish. It tosses out the past few decades' convoluted continuity -- if you know who Lois Lane and Clark Kent are, you're all set. And as smoothly as Morrison's stories flow, they're loaded with smart throwaway ideas and juicy subtexts: The premise of each of these six stories is essentially man against himself, or rather the perfect person, Superman, confronting another version of himself. Quitely's artwork, meanwhile, is splendidly understated, more about body language and facial expressions than grand gestures, although he pulls out the fireworks when they're called for.

"The Blot" by Tom Neely (I Will Destroy You)

Neely's self-published debut graphic novel instantly established him as a cartoonist worth watching. Almost (but not quite) wordless, it starts as a hat tip to the jaunty, loose-limbed style of early animated cartoons, and rapidly evolves into a horrifying existentialist meditation about a splatter of ink that takes over a man's mind and world, the power over life and death that it gives him, and the way it changes his perspective on sex, fear and existence. Is the blot a symbol for the artistic impulse? Maybe -- but it seems to go uncomfortably deeper than that.

"Scott Pilgrim Gets It Together" by Bryan Lee O'Malley (Oni Press)

Four volumes in, and O'Malley's series about a young Canadian slacker coming to grips with his new girlfriend's romantic history (and figuring out how to grow up a little) keeps getting funnier and more incisive. O'Malley grabs storytelling cues wherever he can find them -- kung-fu flicks and Bollywood musicals, manga and especially video games. (This is probably the only non-video-game fiction ever in which characters "level up.") He's so gifted at character comedy that some members of his cast don't have to do much more than show up to get laughs -- obsessive teenage romantic Knives Chau is a great invention -- but almost all of them end this volume more complex and interesting than they begin it.

Shiga has been constructing ornate puzzle comics and formalist exercises (like "Fleep," a 40-page comic set entirely inside a phone booth) for years. This one is his first straightforward narrative, and it's typically unlike anything else: a gritty police procedural about public-library cops in Oakland, Calif., in 1973 assigned to track down a stolen book. Shiga's artwork isn't much more than functional, but it doesn't need to be; dialogue like "I need a check on purchases of Veratex cloth, sienna, crossed with all zincotype presses sold in the area between Mar '71 and Jun '72. ASAP" is intrinsically funny, and kind of fascinating if you've got the right mind-set. And the historical setting -- the moment when technology was starting to change everything about libraries -- gives the story a surprisingly bittersweet mood.

Tezuka was the king of Japanese comics, a natural-born entertainer with broad, ambitious visions and a massive bibliography. Vertical has been publishing new translations of a bunch of Tezuka's projects (maybe most notably "Black Jack," coming next fall); this year, it released the psychological thriller "MW" (first published 1976-1978) and "Apollo's Song," a marvelously screwed-up paean to the power of love and sex, originally serialized in 1970. Incorporating a nightmarish tale of doomed romance in Nazi Germany, a science fiction story about a war between humans and "Synthians," marathon-running sequences, and an opening scene involving half a billion anthropomorphic sperm, "Apollo's Song" is nominally the story of how a man who despises love is punished for his callousness. Mostly, though, it's a chance for Tezuka to bust out one enormous spectacle after another. The story is as emotionally manipulative as a classic Disney movie, and just about as unstoppable.