The Internet hasn't slowed down the tree killers. But you can use it to keep their catalogs and credit card applications at bay. 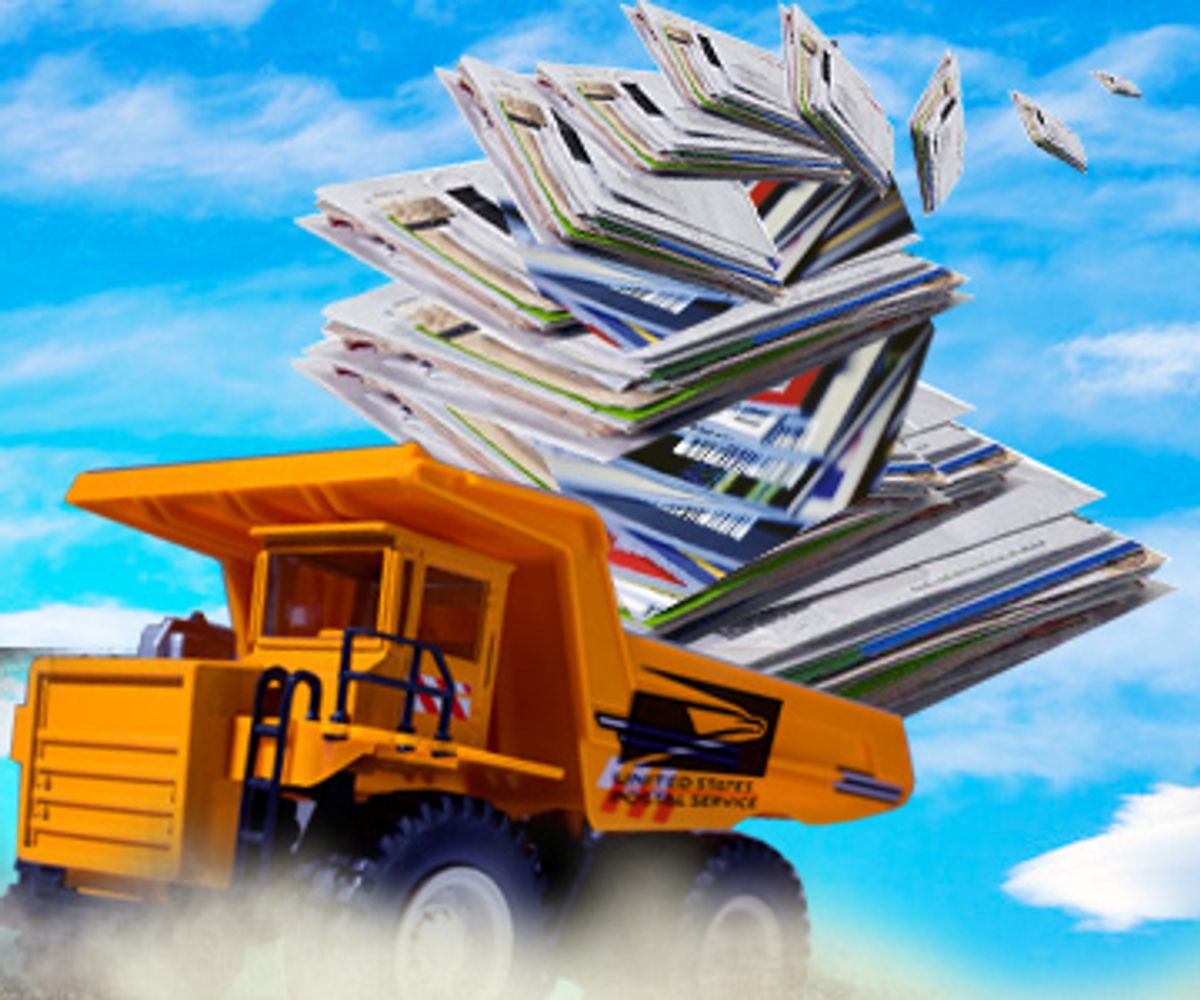 You'd think that with all the spam floating around the Internet these days, good old-fashioned junk mail, the kind that clogs your home's mailbox and the nation's landfills, might be a thing of the past.

Alas, that is not to be. The amount of direct mail that catalog companies, Internet purveyors, and coupon captains send out each year continues to climb, up from 90.5 billion pieces in 2003 to a whopping 103.5 billion pieces in 2007, according to the U.S. Postal Service. "It's a colossal waste," says Kristi Chester Vance, communications director of ForestEthics, a group that has worked to reduce the environmental impact of the catalog industry.

In fact, the annual greenhouse-gas emissions from the production of junk mail are equal to those of 3.5 million cars. (That figure doesn't include emissions from transporting and disposing of the stuff.) Beyond that, each year junk mail production in the U.S. consumes more than 96.7 billion gallons of water and more than 100 million trees, ForestEthics estimates. Most of those, says Chester Vance, come from carbon-dioxide-sequestering, biologically diverse old-growth forests, rather than from sustainably managed tree farms. And according to the Environmental Protection Agency, only about a third of all junk mail is recycled. "All that for a response rate of less than 3 percent," Chester Vance notes, referring to the fact that fewer than 3 percent of people -- often even fewer -- respond to the solicitations.

Junk mail has nonenvironmental problems too. It exposes you to identity theft and is just a drag to sort through. If you spend five minutes a day dealing with junk mail -- shredding credit card offers, for instance -- you blow a full 30 hours a year. Time you could use to write the great American novel, hang out with your kids, or gaze up at the stars.

Usually your name and address end up on junk mail lists because you've purchased something with a credit card, subscribed to a magazine, or listed your name and address on the application for a store's discount card. Merchants sell your information to others. You may have tried stopping your junk mail in the past, perhaps by contacting the Direct Marketing Association, the largest industry trade group, to little or no avail.

But fighting the junk mail hydra requires a multipronged approach, one that environmental groups and Internet-based service providers are taking up in equal measures. Now, several paid and some free services can effectively stop between 80 and 95 percent of all that mailbox clutter.

One such service is the Palo Alto, Calif.-based GreenDimes.com. For a $15 one-time fee, GreenDimes will "contact a dozen or so direct-mail groups on your behalf," says general manager Dan Estabrook. GreenDimes instructs these groups, which compile and sell names to countless companies and banks, to remove your name and address -- including past residents and the omnipresent "current resident" -- from their databases. GreenDimes also monitors the DMA's distribution list on a monthly basis to make sure your name is not included. "On the catalog side, we communicate directly with thousands of catalog companies, indicating that you've authorized us to remove your name," Estabrook says.

GreenDimes' coverage should last for three to five years, he estimates. If you move, you need to re-up. Like other services, GreenDimes allows consumers to choose, for the life of the membership, which catalogs they'd like to receive and which they'd like to stop. And with each new membership, the group plants 10 trees through tree-planting groups American Forests, Sustainable Harvest International, and Trees for the Future.

Ferndale, Mich.-based nonprofit 41pounds.org -- its name is based on the average amount of junk mail a person receives each year -- offers a similar service. For $41, it guarantees to stop junk mail for five years. It erases your name from direct mailers like Valpak, ShopWise, Reader's Digest, Publishers Clearinghouse and Bed Bath & Beyond. It also donates $15 of your fee to nonprofits such as Stopglobalwarming.org.

Stopthejunkmail.com will put the brakes on junk mail to small businesses as well as consumers, for $20 a year.

None of these junk-mail-stopping services has been rated by consumer organizations such as Consumer Reports. But ever since signing up for GreenDimes this summer, I can happily report that my junk mail has stopped; the only pieces I now receive are from the environmental groups to which I belong.

If you don't want to pay anything to stop junk mail, check out Catalog Choice, organized jointly by the Natural Resources Defense Council, the National Wildlife Federation, and the Berkeley, Calif.-based Ecology Center. The Web site allows individuals and businesses to remove their names from the mailing lists of catalogs they don't want. Simply register, find the names of the catalogs you no longer wish to receive, enter the requested information into the Web form and click "Decline." Catalog Choice will then contact merchants on your behalf.

Why focus on catalogs? Although they constitute only about 15 percent of the direct-mail pieces sent out in 2006 -- that's about 15.5 billion catalogs -- "they have a disproportionate effect because of their weight," explains the NRDC's Kate Sinding. Sinding believes consumers aren't the only ones who will benefit from the service. "We think this will help merchants, who can mail to people who want to get their catalogs and not waste money mailing to people who don't," she says.

Of course, the junk mail industry is hip to the fact that most people loathe much of what they produce. So the Direct Marketing Association is getting in on the act, sort of. Its new Commitment to Consumer Choice requires its 3,600-plus member companies to "notify consumers of the opportunity to modify or eliminate future mail solicitations." As of October 2008, you should see a line on every piece of junk mail that explains how to get your name removed from the companies' mailing list. If not, says DMA senior vice president for corporate responsibility Patricia Kachura, you should rat them out to the DMA. "Failure to comply means they can be brought to the DMA board of directors and could be expelled from the association," Kachura says.

The DMA has also made nonbinding environmental recommendations, such as increasing recycled-paper content. And, for $1, the group offers its own consumer Mail Preference Service. The service claims to remove individuals from DMA-member lists; it doesn't remove them from the lists of nonmember companies or from credit card or other financial solicitation lists, which are handled by other concerns. You can opt out of financial solicitations for free, though, by visiting OptOutPrescreen.com, a site jointly run by the four largest credit information agencies.

Finally, in dealing with junk mail, you might want to participate in new efforts by ForestEthics, the Center for a New American Dream and other groups to launch state "Do Not Mail" registries. The registries would prohibit direct marketers from sending unsolicited mail to those who sign up, much in the way the federal "Do Not Call" registry prohibits phone solicitations. "State 'Do Not Call' registries led to the creation of the federal 'Do Not Call' registry," says ForestEthics' Chester Vance, explaining why the groups are focusing their efforts on state legislation first.

The environmental benefits of such a registry could be pretty wide-ranging. And then, hey, think of all the time it could free up to deal with spam.

Liz Galst is a regular contributor to Plenty. Her writing has appeared in the New York Times, Newsweek, and Better Homes & Gardens.