Philip Seymour Hoffman utters one of the year's most refreshing lines in this terrific tale of political wheeling and dealing. 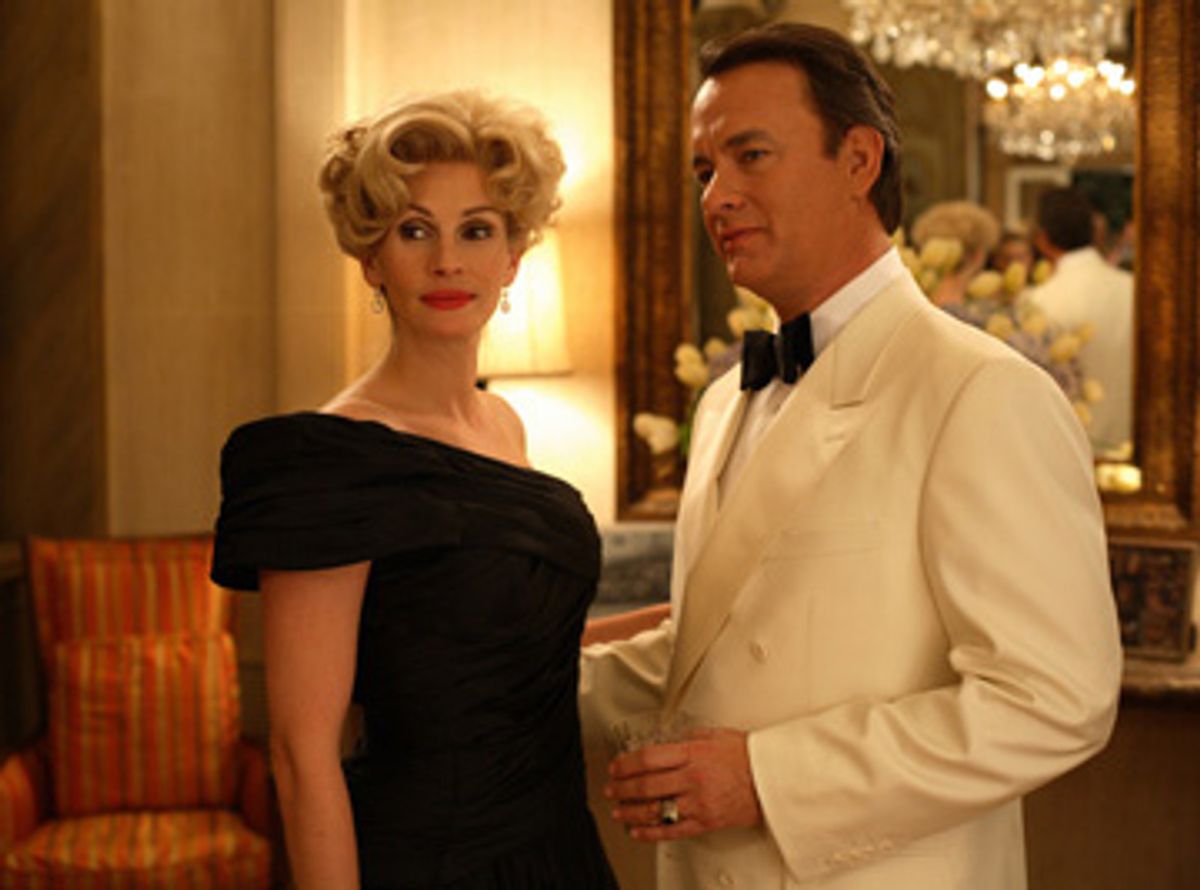 There's a certain kind of person who likes to see a warm, fuzzy movie at holiday time -- the kind of picture that sends you out of the theater loving all mankind, glowing with the belief that in the end, most people are decent enough to do the right thing for the right reasons. But there are others who seek a different kind of affirmation -- that everything in the world really is a mess, and that most times it's difficult enough to know what the right thing is, much less to have any clue about how to actually get it done. For those people, the first words uttered by Philip Seymour Hoffman's character in "Charlie Wilson's War" will be balm to the soul: "Excuse me, what the fuck?"

No actor this year has had a better opening line, and its unfiltered energy symbolizes everything that's right with Mike Nichols' adaptation of George Crile's highly entertaining 2003 book. "Charlie Wilson's War" is an account of how a playboy Democratic congressman from Texas, a rough-mannered CIA agent and a tony Houston socialite put their heads together to funnel -- in the largest covert operation in history -- a billion dollars in military equipment and aid to Afghanistan in the early to mid-1980s, after the country had been invaded by the Soviet Union.

The last years of the Cold War are fairly recent history; they only seem to have happened eons ago. (In the mirror of hindsight, events are often closer than they appear.) Nichols' movie -- taking its cues from Crile's book, as adapted by Aaron Sorkin -- is a story about political wheeling-and-dealing, and about a rapscallion who set about doing what he believed was the right thing, if for the wrong reasons. Obviously, sending weapons to Afghanistan was one way to fight the Communist threat. On the other hand, there were humane reasons to intervene: What were the Soviets doing dropping bombs on defenseless Afghan villages in the first place? Nichols doesn't turn this story into an essay on political morality; he's more interested in telling the story of a couple of rogue guys (and one rather upscale rogue woman) who put their shoulders to the wheel in the service of their principles. Agreeing with those principles isn't the point; Nichols is more interested in exploring their urge to take action as something quintessentially American.

Tom Hanks plays Wilson, the kind of politico who thinks nothing of sinking into a hot tub with a couple of strippers and a few accompanying snorts of cocaine. Moral watchdogs who like their politicians to be pure will be happy to see that this sort of behavior eventually gets him into trouble. But as Hanks plays Wilson, it's thrilling to see him get away with it. Wilson is the sort of guy who peoples his office with Miss Buxley-type secretaries (he wouldn't have called them administrative assistants): "You can teach 'em to type, but you can't teach 'em how to grow tits" is his motto. He wears his suspenders fastened underneath the epaulettes of his shirts: He may not have class, but he does have a certain noisy élan. Texans are often portrayed as being larger than life (those who come from New Haven by way of Texas don't count), and this movie has two of them: The other is Wilson's sometime paramour, Joanne Herring (Julia Roberts), a Houston socialite who pours her political ideas right into Wilson's ear, and Roberts plays her with hair piled high and an equally outsize sense of fun. (In one scene, she regales Wilson with her opinions about the ineffectuality of Congress as she gazes into a mirror, separating her freshly mascara'ed lashes with an open safety pin. Please don't try this at home.)

Wilson may be a fun-loving dirty dog, but he's also the kind of guy who can go to Afghanistan -- at the suggestion of Herring, who is deeply committed to the cause of the Afghan rebels (in other words, the anti-Communist cause) -- and recognize immediately what's wrong with the idea of little kids having their limbs blown off by cleverly hidden Soviet mines. Hanks' performance is boisterous and unmannered, like the movie around him: Nichols and his actors are out to capture the idea of politics as theater (with none of the archness of Nichols' earlier political movie, "Primary Colors"). This is a spectacle, not a satire -- perhaps it's even an unwitting commentary on how contemporary politics have almost gone beyond satire, at least for the time being. To that end, Nichols seems to have had a great time making this picture, and the pleasure is catching. It even features some nice visual fillips: Herring has two beautiful Italian greyhounds who pad around after her on their elegant feet, and Nichols drapes them around the movie like casual quotation marks. At one point we see Wilson's assistant, Bonnie (Amy Adams), who has accompanied him to a work-related function at Herring's mansion, stretched out at the foot of a giant staircase. For a while, she's off-duty -- her boss is upstairs getting up to no good with his lady friend -- and so, bored and listless, she lounges on the stairs, clutching a martini glass, the dogs curled up cozily around her.

But Hoffman is the movie's finest effect. His character, Gust Avrakotos, comes from a Greek working-class family in a Pennsylvania steel town, and he's a guy who -- as you can guess from his first line -- is perpetually annoyed and discontented, and thus spurred to action. Avrakotos and Wilson form an alliance that's uneasy at first, and the scene in which they warily circle each other is played like mild slapstick. They're a Mutt and Jeff united by anti-Communist sentiment, but also by a sense that big countries shouldn't go around bullying little ones. Hoffman's Avrakotos is a schleppy-looking guy, but behind his yellow-tinted glasses, his eyes are always alert. He's a misfit in a world of slick operatives. In Crile's book, the real Avrakotos says of his colleagues, "The only reason half of them got anywhere is because they jerked off Henry Cabot Lodge's grandson at some prep school." Hoffman doesn't say that line in the movie, but he carries its residual resentment inside his frame. Yet instead of bowing him, it gives him extra swagger. Avrakotos doesn't see himself as a working-class hero; he's just a guy who's trying to do his job, in a world of slackers who never think about what their job should be.

Hoffman's Avrakotos swears and curses his way through the movie, as if he were looking for the most direct language possible to cut through the bullshit of politics. Crile, in his book, tells how Oliver North and Richard Perle tried to persuade Avrakotos that instead of sending weapons, the United States should urge Soviet soldiers to surrender to Afghan rebels. Their plan, harebrained by any stretch of the imagination, was to plant loudspeakers in the mountains of Afghanistan, announcing, "Lay down your arms! There is a passage to the West and to freedom."

According to Crile, when Perle and North refused to hear Avrakotos' objections, he brought in five photographic blowups, one showing "two Russian sergeants being used as concubines," another with a castrated Russian hanging from the turret of a tank. Avrakotos said to Perle, "If you were a sane fucking Russian, would you defect to these people?"

"Charlie Wilson's War" shows the world of politics as one of crazy characters and compromise. A little diplomacy doesn't hurt, but when all else fails, maybe the only route is to use the plainest language you can. There are days when only an "Excuse me, what the fuck?" will do.