The secret to Mike Huckabee's success

With his meteoric rise in Iowa, the aw-shucks former governor has an unlikely strategic doppelg 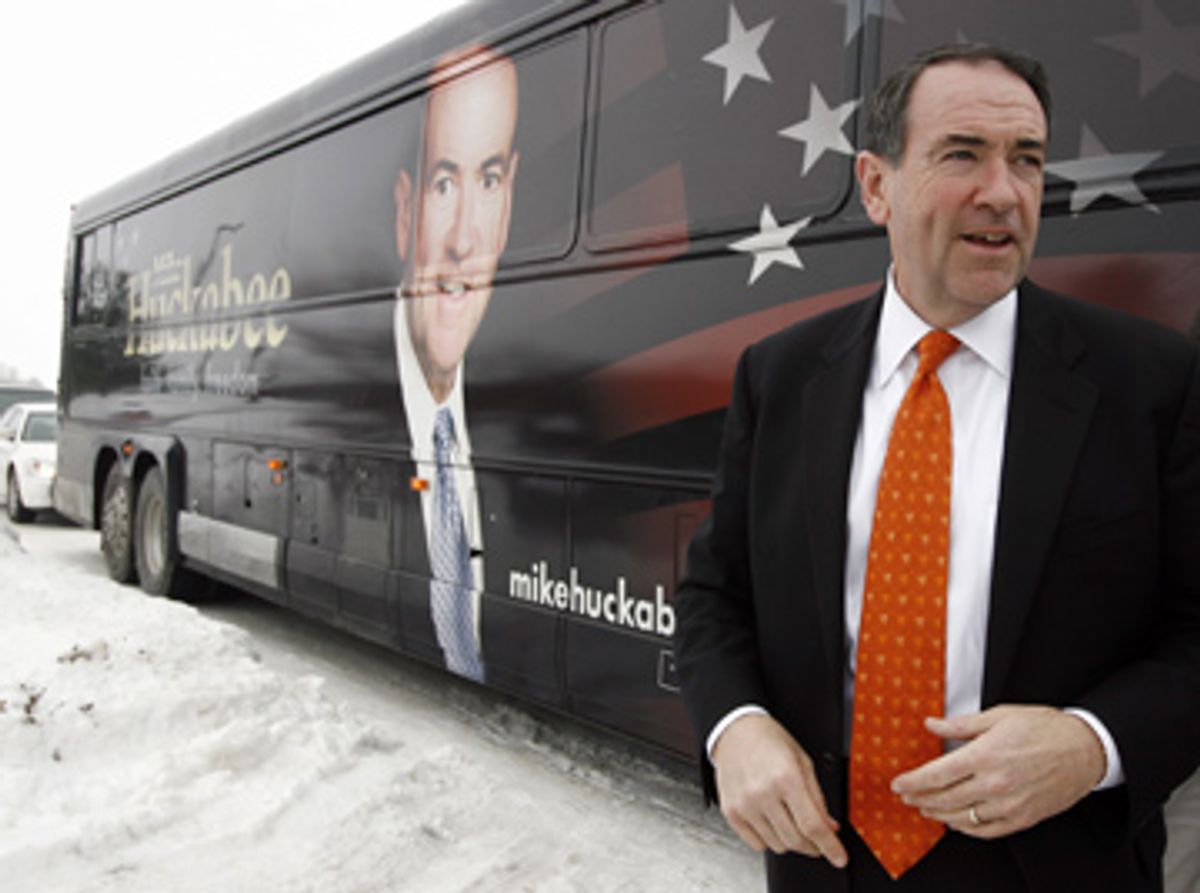 Mike Huckabee's transformation from poll asterisk to political astronaut has been so sudden and dramatic that there is a desperate effort to understand WHAT IT ALL MEANS. Huckabee's return Wednesday afternoon to Iowa, where he is leading in most polls, was accompanied by the kind of camera-crush media frenzy unknown in a Republican presidential race since the glory days of John McCain in 2000. Speaking Wednesday night to 200 Republicans in Ames, Huckabee engagingly confessed, "I get asked every day, 'Why do you think you're surging in the polls?' The honest answer is that I don't know that I know."

The standard interpretation is that Huckabee, a former Baptist minister, is a candidate whose evangelical background resonates with religious conservatives while his sense of humor and surface affability reassure more secular Republicans. Still, his faith-on-his-sleeve religiosity has blurred the line separating religion from politics -- an initial campaign ad ballyhooed him as a "Christian leader" and a strategist for a GOP rival sneeringly refers to the two-term Arkansas governor in private as "Elmer Gantry." The unified field theory of Huckabee also stresses the candidate's moderate record and rhetoric about education, poverty and, until recently, immigration. Viewed from some angles, Huckabee is either a closet Democrat who opposes abortion (the Mitt Romney interpretation) or the true "compassionate conservative," rather than the ersatz George W. Bush version.

But these explanations miss something potentially important. The miracle birth of the Republican candidate with the four-word name -- Mike Huckabee Iowa Front-runner -- has as much to do with social class as religion. There is nothing subtle about Huckabee's celebration of his humble roots: He gleefully told 150 supporters (some more accurately described as acolytes) in Marshalltown Thursday morning that a "Republican muckety-muck" had recently declared that Huckabee was unelectable because he had a "hick last name."

Then, a few minutes later, Huckabee returned to his obsession with the name game. "I didn't grow up with a name that opened a lot of doors or had a Rolodex," he boasted, harking back to his childhood in Hope, Ark. Then, the candidate suddenly switched to a twangy version of an upper-class lockjaw accent as he recalled, "Nobody said, 'Oh, he's a Huckabee, let him in.'" After the laughter died down, Huckabee added, "I often say that for my family, summer was never a verb. We summered in hay fields and chicken yards and all kinds of stuff."

Of course, Huckabee is laying it on thick, but the candidate is peddling his common-man persona more than any specific set of policies. This time around, Romney (the governor's son) and McCain (the son of an admiral) lack convincing hard-scrabble stories from their early years. And the Bush family is not exactly the embodiment of portraits in populism. Huckabee, in fact, stole a joke that Jim Hightower famously used to ridicule the elder George Bush at the 1988 Democratic Convention. "Many of you work hard," Huckabee said, as he looked out at the breakfast crowd (not a tie or a dress-for-success outfit in view) at the Best Western in Marshalltown. "That's what America's always been about. It's not about folks who were born on third base and think they hit a triple."

But the Democrat whom Huckabee appears to be channeling is John Edwards, who never missed an opportunity to remind voters back in 2004 that he was "the son of a mill worker." At a chaotic rally in a cramped room in a West Des Moines shopping mall Wednesday night, Huckabee lifted a signature Edwards phrase, promising that when he triumphs in Iowa on Jan. 3, "America can say thank you for restoring faith in a political system that's not just run by corporate greed but is run by ordinary citizens." Huckabee followed up in Marshalltown by uttering a line of such naked populism that the Baccarat crystal probably rattled in corporate dining rooms around the country: "Wouldn't it be nice to have a president who doesn't find himself wholly owned and completely tied to the biggest corporations in the country?"

Edwards' stump speech, which is far more policy-specific than Huckabee's humorous ramblings, features a riff about how as a trial lawyer in North Carolina he stared down the special interests and their elite armies of corporate lawyers. The same little-guy-triumphant theme is embedded in Huckabee's appeal to voters. In Ames, before a crowd of 200 likely caucus-goers, Huckabee said, "I didn't go to any Ivy League school. I paid my way through a small Christian college in Arkansas. I know that when I first ran for office, I ran against several guys who had Harvard law degrees ... But I found out that the things that I learned in life helped me just as much as Harvard. And, by the way, I won those elections against those guys with the Harvard law degrees."

In contrast, Romney, on the stump in Iowa in late November, told a joke that literally began, "A man walks into a country club." There may be a social-class barrier that explains why, despite Iowa spending that will undoubtedly top $10 million, Romney risks being upended by Huckabee -- an underfunded candidate whose campaign seems modeled on Judy Garland and Mickey Rooney putting on a "backyard musical." Gail Stecker, who works for a food-safety institute at Iowa State University in Ames, captured the Romney-the-robot problem when I spoke to her before the Huckabee speech. "I went to a Romney rally in July and decided that he's not the man for me," Stecker, who was wearing a festive garland of Christmas lights around her neck, recalled. "When Romney looks at you, he looks right through you like he doesn't care."

If Romney falls short in Iowa, that sentence -- "He looks right through you" -- could serve as his epitaph.

Political reporting in Iowa comes with the occupational hazard of trying too hard to find grand overarching themes in the decision of maybe 140,000 Democrats and 80,000 Republicans who will attend the caucuses. Still, with Edwards locked in a tight three-way race in Iowa and with Huckabee the new GOP favorite, it is plausible that the two candidates hogging the headlines on Jan. 3 will be the duo who have been most explicit about railing against the economic elites. Asked about the meaning of such a caucus-night tandem, Eric Woolson, Huckabee's Iowa campaign manager, said, "What it says is that they're both in touch with Iowans. We're a down-to-earth, hard-working people. Very few people from Iowa have a very privileged background."

That may be why after seven years of Bush economic policies, sky-high fuel prices, rampant economic inequality, fears of globalization, and the shadow of recession on the horizon, these down-to-earth, hard-working Iowans may be poised to rebel against the politics of inevitability. There is an inherent populism in proving to the political establishment that ordinary Iowans -- not the TV talking heads -- decide who wins the caucuses. Something is stirring in Iowa that does not fit into traditional political categories and -- for the moment -- Huckabee is its rags-to-riches embodiment.