How to get better gas mileage

Take these tips from auto experts and obsessive "hypermilers" on how to go farther on a gallon of gas. 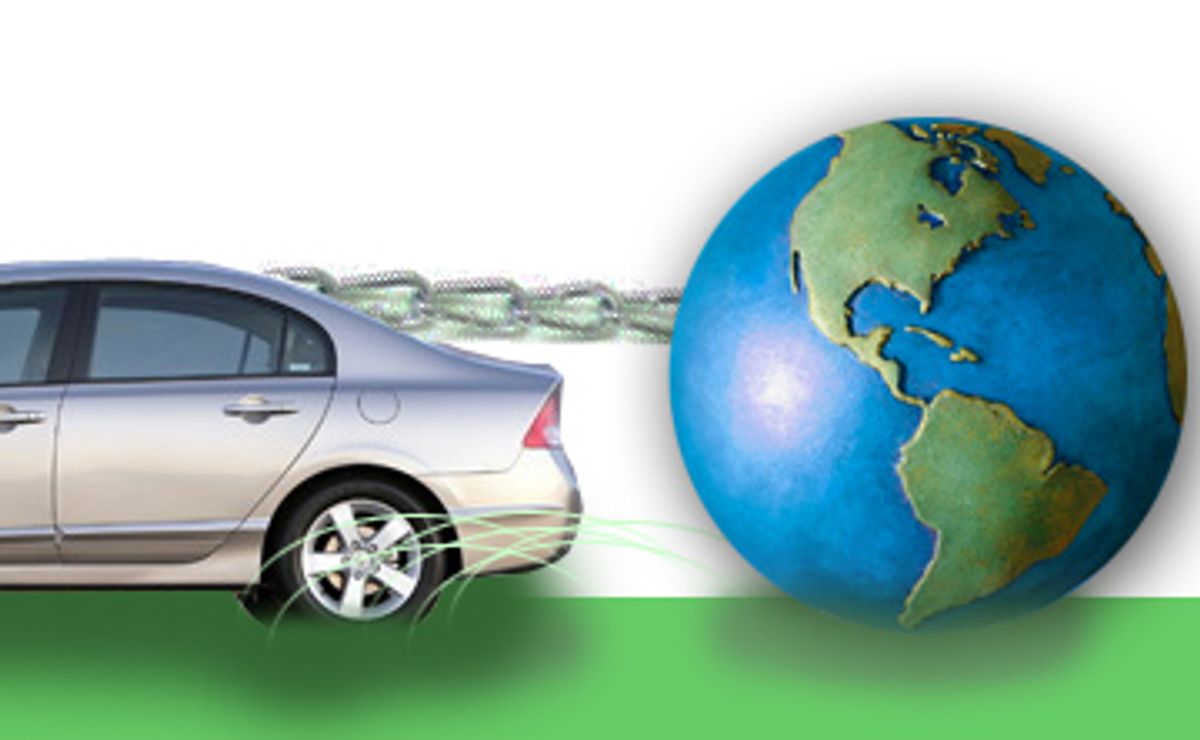 Drink less, give up sweets -- the clean calendar of a new year inspires many earnest vows of self-improvement. With oil flirting with $100 a barrel, and $3 gas looking like the new normal, perhaps instead of resolving to curb your gluttony in 2008, you should pledge to train your car to be a fuel sipper. "Every time you get into your car and turn on your ignition you can save money," says Bradlee Fons of Pewaukee, Wis., who teaches seminars on efficient driving. "It helps the country with national security and oil dependence, and it helps the world with global warming."

The most efficient way to save gas, as any "one-less-car" transportation activist will attest, is to leave your car in the garage. Walk, ride your bike, take the bus or train, or carpool whenever you can. When you're in the market for a car, choose the most fuel-efficient model. That should get easier to do in the coming years as automakers comply with the just-passed law to move America's fleet from an average fuel economy of 25 miles per gallon to 35 by 2020, a 40 percent increase. It means there should be more fuel-efficient models of all vehicle types from compact to minivan to choose from soon.

Yet there are also simple steps that every driver can take with an existing car, truck or SUV to save fuel simply by improving driving habits. "If you're an aggressive driver, and many, many people are, you should become a moderate driver," says Philip Reed, senior consumer advice editor for Edmunds.com. Unfortunately, most people who drive aggressively don't realize it. "Driving for most people is a completely unconscious act. Just a little bit of self-awareness about how you drive can make a huge difference," says Bradley Berman, founder of Hybridcars.com, which offers both easy and advanced tips for driving more efficiently. Adopting a mellower approach on the road not only will ameliorate your road rage but could save you the equivalent of $1 a gallon, according to the U.S. Department of Energy, by improving your fuel efficiency as much as 33 percent.

"We all learned how to drive when gas was cheap, and we have to relearn how to drive," says Fons. To chill out behind the wheel, first curb rapid acceleration and excessive braking. Start by avoiding so-called jack rabbit starts -- aggressively accelerating from a standstill at a stop sign or a stoplight. But remember, midrange acceleration also gobbles fuel, according to Reed from Edmunds. "You're going 50, and there's an opening in traffic, and you need to accelerate to 75, and you hammer it -- that requires a lot of energy." Learn to accelerate smoothly and gradually. Press down on the pedal with the light touch of a feather.

Adopting a lower cruising speed can also help your car go farther with less gasoline. The efficiency of most cars rapidly declines at speeds over 60. In fact, every 5 miles per hour over 60 you drive is like paying an extra 20 cents a gallon for gas, according to the Department of Energy. So the next time you're tempted to pull ahead of the guy in the Ferrari on the freeway, think of the Saudis and keep out of the fast lane.

Just as hammering the gas is a bad idea, so is slamming on the brakes. Instead, anticipate stoplights and stop signs so that you can back off the accelerator, whenever possible, to slow down, and then gently apply the brakes. "If your vehicle weighs 4,000 pounds, it takes a lot of energy to get that going from a dead stop," explains Fons, who drives a 2000 Honda Insight, and through his driving habits manages to wring as much as 100 mpg out of the car, which is rated at 66 mpg by the Environmental Protection Agency. In stop-and-go traffic, strive to maintain one consistent low speed instead of accelerating and braking, accelerating and braking. To do this, drive in the slow lane, and maintain a long buffer zone in front of you, so you won't have to slam on the brakes to avoid rear-ending the next car.

Drivers are often unconsciously influenced by the speed of the other cars around them, which can lead to speed creep. "When a faster car passes you, you have a tendency to speed up. Soon, even though you were committed to going 70, you're going 80," says Reed. "In some cases, cars are so well insulated it's easy to go fast without realizing it." A good way to avoid that pitfall: Use the cruise control on the freeway, which will also help you avoid the temptation to constantly dart forward when you see an opening in traffic up ahead.

Any time you hear the engine revving high you're gulping fuel. If you drive a stick shift, and you're cruising along in third, shift to fourth, and hear the revs of the engine drop. Your car is the most inefficient when the engine is still warming up, so taking fewer trips by combining errands into one trip will save gas. Drive to your farthest destination, and then do the errands closer to home on the way back. When choosing your route, avoid hills if possible, so you won't be wasting energy hauling thousands of pounds of steel up an incline.

If you've got 57 books in your trunk that you keep meaning to donate to the library, but never get around to doing, try this experiment: "Take all that stuff out, and put it in a wheelbarrow, and push it up and down the driveway once, and you'll see how much energy it takes," says Wayne Gerdes. Gerdes invented the term "hypermiler" to describe the obsessive drivers like him who strive to wring every last mile out of a gallon of gas, exceeding the EPA's estimate of how far a car can go per gallon.

The more weight your car has to carry the harder it works, even though the overall gas savings are small, about 1 to 2 percent per 100 excess pounds eliminated, according to the U.S. Department of Energy. Reed at Edmunds doesn't worry too much about excess weight in the trunk, since he believes this tip was crafted back in the 1970s when New Englanders would keep 150-pound bags of sand in their trunks in hopes of getting better traction in the ice and snow in winter.

Avoiding excessive idling is also a must. Anytime you're idling for more than 15 seconds, such as at a railroad crossing or when waiting curbside to pick up your child from school, turn off your engine, advises Fons, who co-founded the Milwaukee Hybrid Group, which gives tips on what he calls eco-driving. The bigger your engine, the more fuel you typically waste idling. But whatever car you have, when it's idling it gets -- duh! -- zero miles per gallon. Idling is one of those bad habits that die hard. "Cars used to be hard to start. Oil was cheap, and we didn't care about global warming," says Reed. "These days cars are fuel injected."

Keeping your car tuned up can also bring some gas mileage improvements. Keeping tires properly inflated and frequently changing the air filter are the two biggies. "Gasoline is only one of the fuels the car burns," explains Reed. "The other is oxygen, so feeding it with clean oxygen is very important."

If you really get into saving gas, you can invest in a scan gauge, which costs about $170. It will inform you in real time what miles per gallon your car is getting. (Hybrids already come equipped with them.) Gerdes, who says he once got 127 mpg (over the course of 90 miles) in a 2004 Toyota Prius, believes drivers can realize a 15 percent savings on fuel overnight by buying and heeding a gauge.

Driving experts say there's no need to wait for years to benefit from the new fuel-efficiency law. We can see major gas savings now simply by backing off the accelerator and brakes. "Everybody and anybody can do this no matter what they own and drive," says Gerdes. With practice, you, too, can become a hypermiler, and soon be shaming your lead-foot neighbors with your superior miles per gallon.