With Bhutto gone, does Bush have a Plan B?

Bush's failed policies in Pakistan, a nuclear power that al-Qaida still uses to plot against the West, threatens U.S. security more than Iraq ever did. 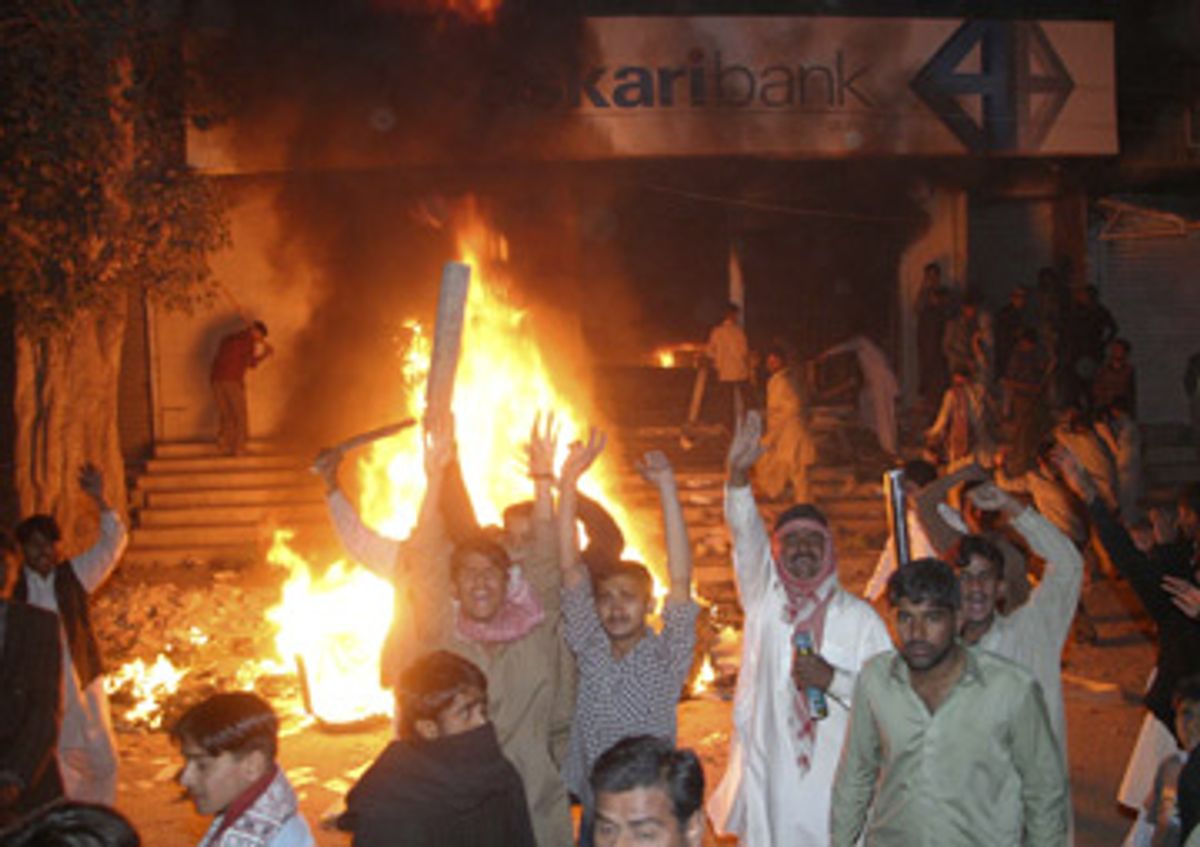 The assassination of Benazir Bhutto on Thursday provoked rioting in Islamabad and Karachi, with her supporters blaming President Pervez Musharraf, while he pointed his finger at Muslim extremists. The renewed instability in Pakistan came as a grim reminder that the Bush administration has been pursuing a two-front war, neither of which has been going well. Bush's decision to put hundreds of billions of dollars into an Iraq imbroglio while slighting the effort to fight al-Qaida, rebuild Afghanistan, and move Pakistan toward democracy and a rule of law has been shown up as a desperate and unsuccessful gamble. The question is whether President Musharraf now most resembles the shah of Iran in 1978. That is, has his authority among the people collapsed irretrievably?

The Bush administration backed military dictator Musharraf to the hilt as a way of dealing with U.S. security and al-Qaida on the cheap while it poured hundreds of billions into Baghdad. George W. Bush was entirely willing to let the Pakistani judiciary, the rule of law, and any real democracy be gutted by an ambitious general. For Washington, allowing Bhutto to return to Pakistan was simply a way to shore up Musharraf's legitimacy. Now Pakistan faces new turmoil, and Bush appears to have no Plan B. Since Pakistan is a nuclear power and al-Qaida extremists still use it as a base to plot against the West, this failure is inexcusable and threatens U.S. security in a way Iraq never did.

Bhutto, the leader of the Pakistan People's Party, was leaning out of the sunroof of a car leaving a political rally on Thursday evening in Rawalpindi near the capital, Islamabad, when an armed assailant dressed as a policeman approached, shot her twice, and then detonated a belt bomb, killing her and some 22 other persons. When Bhutto's death was announced, rioting broke out in Rawalpindi and her home base, the southern port city of Karachi. Many of her supporters blamed Musharraf, who, though he recently resigned from the military, came to power in a 1999 military coup and has ruled as a military dictator. The house of a senior politician from the Pakistan Muslim League (Qaid-i Azam), Musharraf's party, was burned down by an angry mob. It is clear that many in the Pakistan People's Party blame Musharraf and his supporters for Bhutto's death, whether fairly or unfairly. If this sentiment becomes widespread, it is hard to see how Musharraf can survive.

The Pakistan People's Party was expected to do well in the scheduled Jan. 8 parliamentary elections, which the Bush administration had hoped would begin a transition away from military rule. The PPP, which has an impressive grass-roots organization that has proved it can get out the vote in election after election, has been important in Pakistani politics since the 1970s. It has been in power at the federal level during 11 of the past 36 years and has particular strength in the Punjab, Pakistan's wealthiest and most populous province. The party will hold a convention to formally elect a successor to Bhutto, but whether parliamentary elections can still be held on Jan. 8 has been cast into doubt. Bhutto's rival, Nawaz Sharif, who heads the right-of-center Muslim League, announced that his party would boycott the elections to protest the failure of the Pakistani military to give Bhutto better security.

Bhutto's assassination was a profound blow to Bush administration policy in South Asia. Washington looked the other way when Musharraf had himself elected "president" in a referendum in spring of 2002, wherein he had no competition. It accepted Musharraf's interference in the fall 2002 elections, which was aimed at handicapping the two major parties, the Pakistan People's Party and the Muslim League. All Musharraf managed to do was to throw the key northwest frontier province and Baluchistan into the hands of the Muslim fundamentalist parties, which had never before done so well in those regions, but which were left without much competition when their rivals were hobbled by the military. These Muslim fundamentalist local governments in turn ran interference for Muslim radicals, denying that there was any such thing as al-Qaida.

The combination of political ineptitude whereby Musharraf helped put the fundamentalists in power in the Pushtun regions of Pakistan and the heavy-handedness of his military interventions in the fiercely independent tribal north, helped set the stage for the greater political violence. The government's neglect of the hardscrabble farming regions of the north also fueled discontent.

At the same time it was coddling the dictator, the United States has been attempting to do nation building in Afghanistan and to strengthen the government of Hamid Karzai, while trying to face down a resurgent Pushtun insurgency in the south of that country. In the frontier badlands of the tribal areas straddling Afghanistan and Pakistan, remnants of the Taliban and the "Arab Afghans" of al-Qaida have been hiding out and regrouping. There is some evidence that they continue to have contacts with, and even to train, Muslim militants based in Europe. The Pakistani military dislikes the Karzai government and sees the "Northern Alliance" that came to power with American help as overly friendly to India and Iran. It is suspected that some elements in the Pakistani army and its military intelligence branch, the Inter-Services Intelligence, are secretly stirring up Pushtun tribesmen against the Karzai regime in hopes that a government more friendly to Pakistan will come to power.

Paradoxically, the Pakistani military has cracked down hard on Taliban-like groups inside Pakistan itself. Troops have fought several major engagements in the rugged tribal territories of the north, and over time have captured some 700 al-Qaida operatives. But the fiercely independent tribespeople of Waziristan and its neighboring areas have fought back. Starting in September 2006 the military even attempted a truce with the tribal leaders in hopes that they would deal with the Muslim militants themselves. That truce began to break down when the military stormed the Red Mosque in the capital, Islamabad, where Pushtun and Baluch tribesmen belonging to a neo-Deobandi cult and advocating strict puritanism had established themselves and begun acting like vigilantes. Musharraf ordered his military to close the mosque, where the cultists had stored arms, resulting in a sanguinary conflict. In the aftermath, Muslim militants in Pakistan's northeast carried out a record number of suicide bombings.

If he faced a rural crisis deriving from the fundamentalism of neglected northern farming communities, Musharraf faced an urban crisis as well. Pakistan's good economic growth for the past six years has helped create a new middle class, numbering in the tens of millions, who are educated and connected to the world by cable television and the Internet. They depend on the rule of law to pursue their white-collar occupations, and when Musharraf attempted to fire the chief justice of the Supreme Court, the urban middle classes staged large rallies and resisted the packing of the courts. They won the first round when Musharraf, weakened by the Red Mosque fiasco, was forced to reinstate the chief justice.

Benazir Bhutto served as prime minister twice, from 1988 to 1990 and again from 1993 to 1996, and was dismissed on charges of corruption both times. She has been in political exile since 1999, the year of Musharraf's military coup. After the Red Mosque debacle and his conflict with the country's Supreme Court, Musharraf was so weakened that he accepted a new American plan. It provided for Bhutto to return and contest elections, such that she would likely be the next prime minister, and for Musharraf to resign from the military and become a civilian president. This plan was in danger of being derailed when the Supreme Court seemed likely to decide that Musharraf was ineligible to serve as president, and the dictator reacted by dismissing the court, packing it with his own supporters, and declaring a state of emergency. Bhutto expressed outrage at those high-handed actions and clearly feared that they would taint her own legitimacy. Under severe American pressure, Musharraf lifted the state of emergency and agreed to new elections on Jan. 8.

Pakistan's future is now murky, and to the extent that this nation of 160 million buttresses the eastern flank of American security in the greater Middle East, its fate is profoundly intertwined with America's own. The money for the Sept. 11 attacks was wired to Florida from banks in Pakistan, and al-Qaida used the country for transit to Afghanistan. Instability in Pakistan may well spill over into Afghanistan, as well, endangering the some 26,000 U.S. troops and a similar number of NATO troops in that country. And it is not as if Afghanistan were stable to begin with. If Pakistani politics finds its footing, if a successor to Benazir Bhutto is elected in short order by the PPP and the party can remain united, and if elections are held soon, the crisis could pass. If there is substantial and ongoing turmoil, however, Muslim radicals will certainly take advantage of it.

In order to get through this crisis, Bush must insist that the Pakistani Supreme Court, summarily dismissed and placed under house arrest by Musharraf, be reinstated. The PPP must be allowed to elect a successor to Ms. Bhutto without the interference of the military. Early elections must be held, and the country must return to civilian rule. Pakistan's population is, contrary to the impression of many pundits in the United States, mostly moderate and uninterested in the Taliban form of Islam. But if the United States and "democracy" become associated in their minds with military dictatorship, arbitrary dismissal of judges, and political instability, they may turn to other kinds of politics, far less favorable to the United States. Musharraf may hope that the Pakistani military will stand with him even if the vast majority of people turn against him. It is a forlorn hope, and a dangerous one, as the shah of Iran discovered in 1978-79.