A week before the Iowa caucuses, Clinton's "Big Problems, Real Solutions" tour reminds voters the world is dangerous -- a message tragically reinforced by the assassination of Benazir Bhutto. 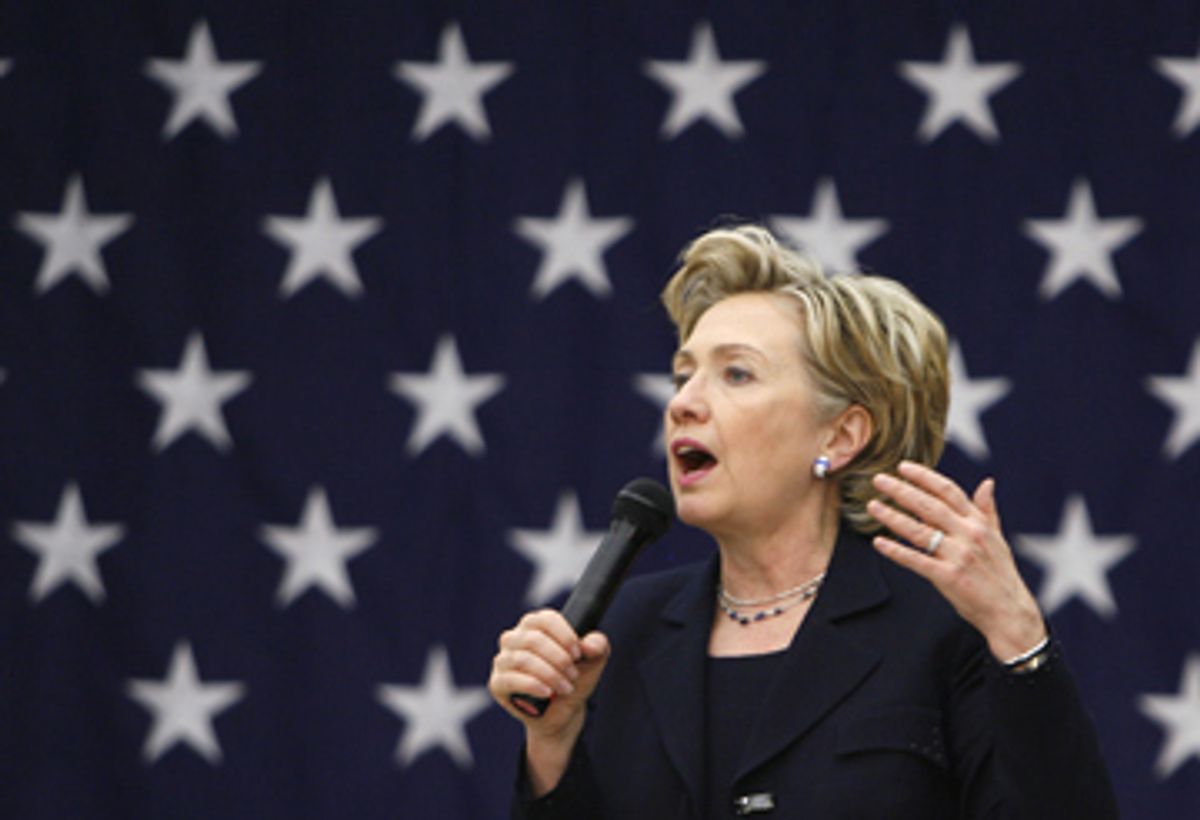 Hillary Clinton arrived here the day after Christmas with a simple message for Iowa caucus-goers: The fun is over, and now it's time to get serious. The world is a scary place; the economy feels as though it's ready to collapse, healthcare bills keep going up and up, the country is mired in wars, and the government just doesn't seem to work right. And that's only the trouble we knew about Wednesday -- as Benazir Bhutto's assassination on Thursday made starkly clear, unexpected crises cross the president's desk every day.

"On Jan. 20, 2009, someone will raise his or her hand to take the oath of office in front of our Capitol," Clinton said as she launched her final bus tour of Iowa. "And then that person will go to the Oval Office. And on the desk in the Oval Office will be a stack of problems."

That's what Clinton's campaign is about now, right down to the clunky official name of the tour, "Big Problems, Real Solutions -- Time to Pick a President." Forget the polls, and the horse race. Forget the flashier rhetoric from the other guys. Forget the tactical differences among the Democratic candidates about how they'd accomplish the policy goals most of them share. Clinton is confronting voters with a much starker question -- which candidate can walk into the White House and get right to work fixing the mess we're in?

Sixteen years later, Bill and Hillary Clinton are reviving the "buy one, get one free" theme of the 1992 election, making their time in the White House into a co-presidency, so the other leading Democrats look like rookies in comparison. Even the failed effort to reform healthcare that Clinton led has become a talking point. "When I went to the White House with Bill, we tackled some very tough problems," she said Wednesday. "One was trying to get healthcare for every single American. I like to say that problem tackled me back."

That line notwithstanding, most of the laughs her consultants once hoped would warm her public image are gone. (For that matter, so is most of her earlier talk about making history as the first woman president.) Everything's weightier now, and the atmosphere at Clinton's events seems intense even by the standards of the last week of a campaign. Her newest ad, which hit the air as her bus tour began, mixes troubling images with a stirring but somber instrumental soundtrack and no narration. It's called "Stakes," and -- no surprise -- she thinks they're high.

"You have an awesome responsibility," she tells Iowa Democrats. "The entire country and even the world will be watching." She'll broadcast a two-minute taped message statewide next Wednesday, the night before the caucuses, that hits the same theme. At rallies, where she constantly draws crowds of 200 or more, she leads voters through a recitation of the dangers facing the country, then ticks through her experience, from Little Rock to Washington, solving the same kinds of problems. "We need someone on day one and every day after, to be prepared for all that we know awaits and to be prepared for whatever comes our way," she said here. "We've had seven years of a president who I believe has turned our country backwards." At this point in the campaign, even the Mount Pleasant high school marching band stayed on message -- when they kept the crowd entertained before the rally, they opened with "The Final Countdown."

If voters don't get the point from one Clinton, maybe they can get it from her husband. Before breaking off to cover more ground by holding his own rallies, Bill Clinton introduced Hillary in Mount Pleasant Wednesday. "Being president under the best of circumstances is a challenging job," he said. "All the easy decisions get made by somebody else -- that's what you have help for." (Still a big draw, the former president had to leave the stage once Hillary started speaking -- the people closest to him were paying more attention to getting autographs than to the candidate's stump speech.) Or from their daughter, Chelsea, who's also on the trail this week. ("Are you going to caucus for my mom?" Chelsea asked anyone who approached her after rallies.) Or from longtime family friends and political allies, who are touring Iowa this week in clusters the campaign calls "Hill's Angels" to make the same pitch.

Sen. Barack Obama's new stump speech Thursday morning answered Clinton's experience argument more directly than he has through the entire campaign. "The real gamble in this election is playing the same Washington game with the same Washington players and expecting a different result," he said. Obama's advisors are trying to highlight the flip side of all that experience: If Clinton has been so influential for so long, they say, she deserves some of the blame for the Bush administration's mistakes -- especially the Iraq war, which she voted for.

Obama's senior strategist, David Axelrod, went even further, telling reporters Thursday that instability in Pakistan was partly due to the United States "taking its eye off the ball" by invading Iraq. "She was a strong supporter of the war in Iraq, which we would submit was one of the reasons why we were diverted from Afghanistan, Pakistan and al-Qaida, who may have been players in this event today, so that's a judgment she'll have to defend," Axelrod said after Obama's speech. (Clinton aides called that line baseless and accused Obama of politicizing a tragedy and a geopolitical crisis.)

That exchange, though, only highlighted how events can move faster than even the smartest strategists. Bhutto's assassination brings the experience question into sharp relief, right when Clinton was trying to do the same thing. The attack could make caucus-goers think twice about the heavy emphasis on domestic issues over the last few months of the campaign. Her aides won't say so publicly, but they don't have to. Just by talking about Bhutto's death, Clinton reminded audiences Thursday of her foreign travel during her husband's administration. "I have known Benazir for more than 12 years," she said Thursday night in Guthrie Center. "She was prime minister when I traveled to Pakistan with Chelsea on behalf of our country to develop better relations and to look for ways that she could cooperate." Bhutto and Clinton talked about their families, too, she said -- implying she's such an old foreign policy hand that she's friends with world leaders.

Of course, what won't be clear until next week is what the voters think of it. Clinton has only a couple of years more in the Senate than Obama or John Edwards, the rivals she's warning people not to take a chance on. For her supporters, the case is already made. "First ladies -- if you believe that they aren't involved in what's going on in this country, then just think of your own wife," said Ron Fedler, the mayor of West Point, Iowa, who's backing Clinton and came to the Mount Pleasant rally. "Is she involved in what's going on in your life? Of course she is!"

But political operatives estimate as many as one out of every five caucus-goers might not have made up their minds yet, and for undecided voters, it's a little more complicated. Some say they can see Clinton's point, but the argument still hasn't closed the deal. "I know she could get the job done," said Nell Duwelius, who's trying to choose between Clinton, Edwards and Obama. "I hope [Obama] can get the job done." As Clinton hammers through her résumé line by line, though, she risks leaving the crowd behind, even if she gets the idea across. There's nothing subtle about her latest theme; from the gigantic American flag backdrops to the plain-spoken rhetoric about plowing through Republican obstacles, Clinton almost seems to be trying to bulldoze voters into her camp. "It's not terribly inspiring," Jaclyn Rundle, a management professor at Central College, after listening to Clinton make her case at a rally in Pella. "There's nothing flashy about it, nothing very elevating."

Flashy or not, Clinton is making her pitch as clear she can -- when something like this happens, she's the one who knows what to do about it. "The job itself is unpredictable," she said Wednesday, even before Bhutto was killed. "You never know what may happen in some part of the world that will create a real challenge at home to us here in Iowa." There's less than a week for Iowans to weigh whether Clinton is the one they want in charge when faraway calamities like the Bhutto assassination threaten to have repercussions at home.