The assassination in Pakistan had the candidates responding to the real world -- ever so briefly. 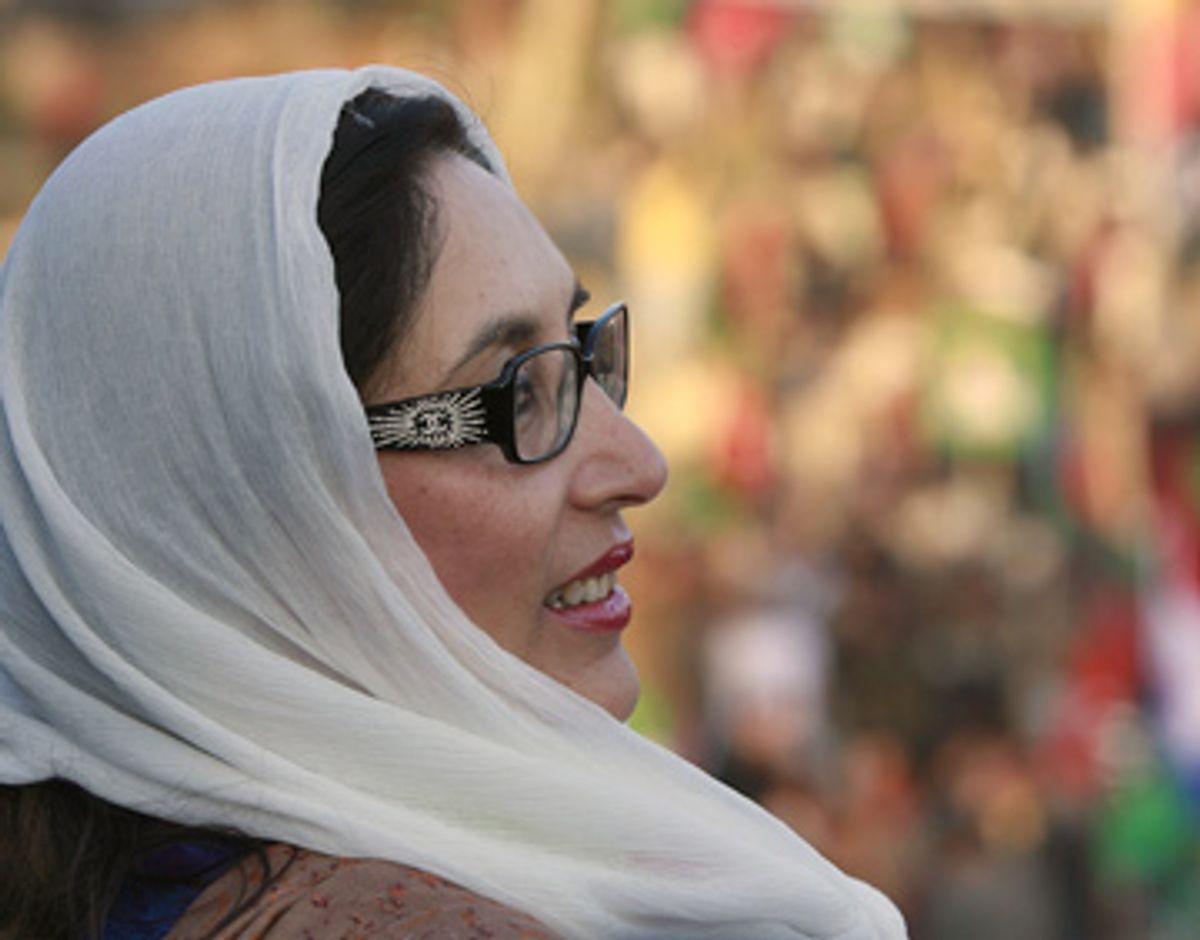 Thursday morning in Iowa -- just about the same time that Benazir Bhutto was assassinated in Pakistan -- Joe Biden aired a new TV ad that begins with a slow closeup of the desk in the Oval Office as the off-screen narrator says gravely, "We don't have to imagine the crises the next president will face." Sadly, those words were far more prophetic than the admaker ever intended.

Reality has an awkward habit of intruding on politics. What was already a weird week -- with the campaigns going full tilt, as if Christmas never happened and New Year's was still six months away -- became even stranger in the wake of Bhutto's death. In Des Moines, Barack Obama wedged a few awkward sentences of mourning ("Before I start the speech that I was intending, I want obviously to state how shocked and saddened we all are [over] the fact that former Prime Minister of Pakistan Benazir Bhutto [has died]") between his effusive thanks to his campaign field organizers and the unveiling of his retooled stump speech.

Most of the candidates in both parties followed similar scripts in honoring Bhutto -- a sentence or two expressing personal sadness, condolences to her family and cookie-cutter language about the necessity to restore democracy in Pakistan. John Edwards hit all the basics in a statement released by his campaign -- from praise ("Benazir Bhutto was a brave and historic leader for Pakistan") to grief ("Her assassination is a sad and solemn event, and our hearts go out to her family and the Pakistani people") to renewed determination ("We should do everything in our power ... to ensure that Bhutto's movement towards democracy continues").

The Republicans, though, added a few wrinkles of their own. Rudy Giuliani glossed over Bhutto's life but embraced her death as a reminder "that terrorism anywhere -- whether in New York, London, Tel-Aviv or Rawalpindi -- is an enemy of freedom. We must redouble our efforts to win the Terrorists' War on Us." Fred Thompson adopted a blustery, tough-guy stance about Bhutto's death, saying in a Fox News interview, "We need to understand that this is not a criminal investigation anymore -- so we find the bad guys and bring them to justice -- it's a war." In a statement, Mike Huckabee felt compelled to remind American voters "that while our democracy has flaws, it stands as a shining beacon of hope for nations and people around the world."

In theory, a tragedy like this should boost candidates whose foreign-policy background extends beyond reading the New York Times on a semiregular basis. Yet Hillary Clinton -- who as first lady visited then-Prime Minister Bhutto in Pakistan in 1995 -- initially had little to say beyond the obvious when she spoke in Lawton, Iowa. The assassination of the first woman leader of a Muslim country might have inspired something more eloquent or more emotional than the flat: "I have known Benazir Bhutto for a dozen years and I knew her as a leader. I knew her as someone was willing to take risks to pursue democracy on behalf of the people of Pakistan."

On the campaign trail, John McCain -- the only major GOP contender with foreign-policy credentials that extend beyond the boundaries of New York City -- spoke humbly and honestly about America's limitations in dealing with nuclear-armed Pakistan: "I'd like to tell you I can wave a magic wand or have some elixir that would cure this problem. It's going to be a very tense and unsteady time." Former U.N. ambassador Bill Richardson, in contrast, immediately called for a suspension of military aid to Pakistan until Pervez Musharraf steps aside in favor of "a broad-based coalition government." Chris Dodd, who has spent more than a quarter century on the Senate Foreign Relations Committee, issued a statement that stressed that he had spoken with Bhutto "personally several weeks ago and stayed in touch with her since."

Yet Biden, the chairman of the Foreign Relations Committee, remains the candidate who had been the most fixated on Pakistan in the weeks leading up to the assassination. In a press conference in Des Moines Thursday morning, he went out of his way to talk of Bhutto's fearlessness in the face of what she knew was the threat of death. "It takes a lot of courage to be this woman," he said, refusing to consign her to the past tense. "How many leaders in the world would do what she did? ... On the human side of this, this is a genuine tragedy. A truly fine" -- and here Biden paused, knowing that Bhutto's record in office was decidedly mixed -- "We're all flawed. All leaders are flawed. This was a truly, truly courageous woman."

Bhutto's death will probably do little to inspire the serious foreign-policy debates that have been missing from the presidential races in both parties. (Republican bidding wars over which candidate is the most enthusiastic about Guantánamo and waterboarding do not qualify.) Richardson, in an encouraging sign, has scheduled a major address on Pakistan and terrorism for Friday morning in Des Moines. But such seriousness seems possible only for the candidates who are lagging in the polls. At any moment now here in Campaign Land, Pakistan will be overshadowed by that far more formidable P-word -- polls.