"Musharraf has much to answer for"

After Bhutto's death, the press in South Asia and Europe fear for democracy's future in Pakistan, which could go up in "turbulent smoke and bloody dust." 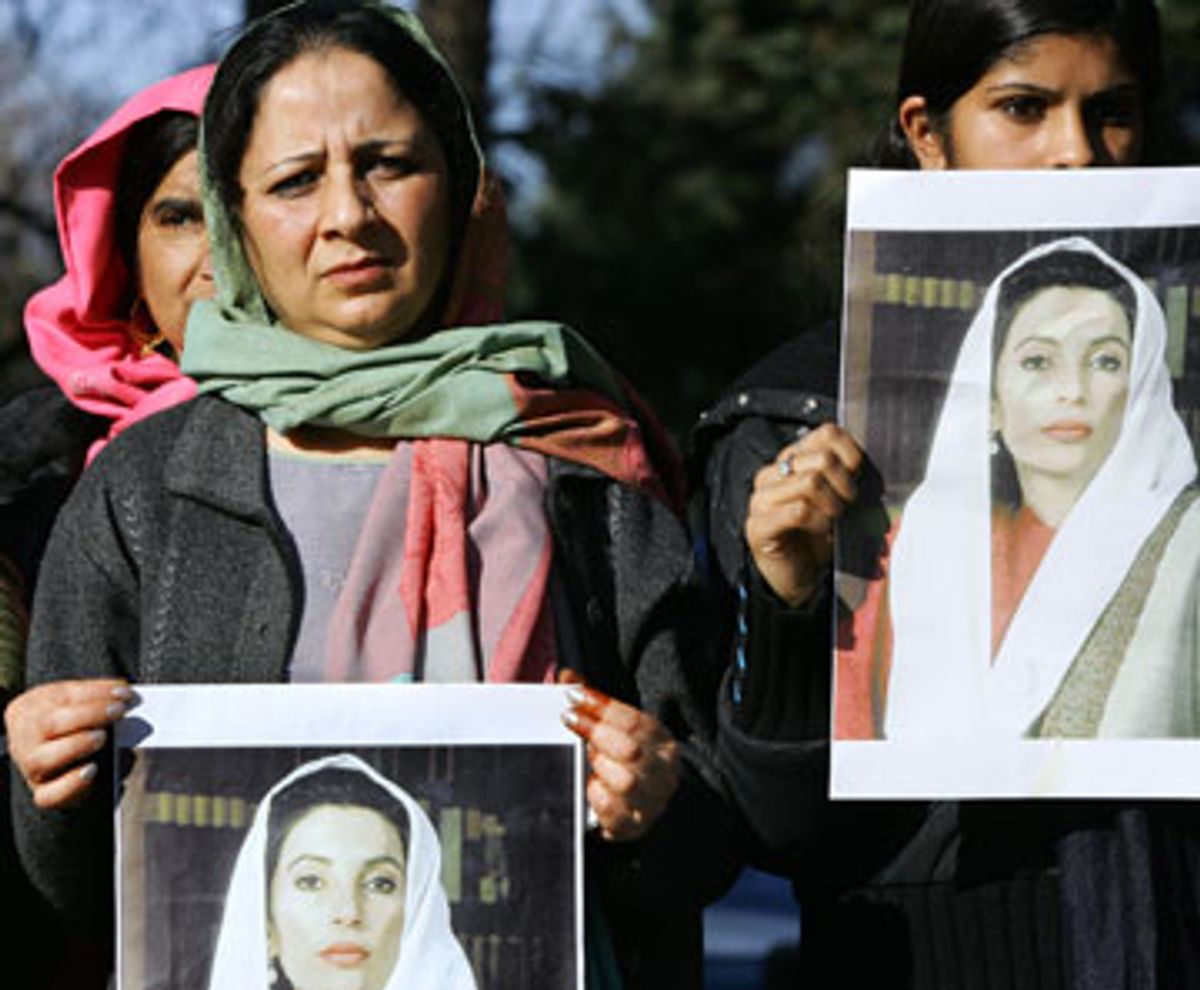 Those words -- and premonitions of more dangerous uncertainty to come -- have turned up routinely in the first wave of overseas news media reports and commentaries focusing on yesterday's gun-and-bomb assassination of Pakistani politician Benazir Bhutto in Rawalpindi, an army-garrison city just south of Islamabad, Pakistan's capital, in the northeastern part of the country. The attack reportedly killed up to 30 other people.

Her "unbelievable and stunning" death, notes an editorial in the News, a Pakistani daily, "throws ... the painfully excruciating march of the country towards a democratic polity, the carefully crafted plan for a peaceful transfer of power to an elected leadership and the reluctant strategy of an authoritarian regime to yield to the will of the people up into turbulent smoke and bloody dust."

Bhutto, a two-time former prime minister, was the daughter of Zulfikar Ali Bhutto, Pakistan's first popularly elected prime mister (who was deposed in a military coup in 1979 and later executed). Facing what she said were politically motivated charges of corruption and mismanagement while serving as P.M., Benazir Bhutto went into exile in 1999. In October of this year, she returned home to lead the Pakistan People's Party in its campaign for parliamentary elections that were expected to take place in January.

Notes the News: "Bhutto was expressly aware of the threat to her life and she had been saying so publicly ...That is probably why she did not bring her immediate family, husband Asif Ali Zardari and [their] three children, back to Pakistan ... She had been pointing fingers at the retired elements in the state intelligence agencies, those who had themselves turned into religious fanatics or supporters of violent extremism, saying that they were after her because she supported a moderate and liberal Pakistan."

France's Le Monde states plainly that, as a result of "her battle against Islamism," Bhutto had become "a target of [Muslim] extremists." The paper's Islamabad-based correspondent reports that she had been "targeted by a radical-Islamist fringe ever since she accused the government" of Pakistan's U.S.-backed dictator, President Pervez Musharraf, "of not fighting hard enough against the extremists." In Germany's Der Spiegel, journalist Nadeem Wahid Siddiqui, a contributor to the Deutsche Welle news service, notes that on the campaign trail, Bhutto "had announced that she would go after fundamentalist-Muslim schools and terrorists." Siddiqui adds that, given the hard-line position of Muslim militants who opposed everything she stood for, Bhutto had effectively spelled out "her death sentence" by voicing such intentions.

In India, the Hindustan Times observes: "Pakistan has fallen off the edge ... [Bhutto's] death not only signifies how deeply mired in violence Pakistani politics is but it also points to the total change in the political atmosphere that [country] has undergone ... under the leadership of Pervez Musharraf. This was no assassination in some jihadi corner of Pakistan. It took place in the garrison town of Rawalpindi, the heart of Pakistani Army-ruled Pakistan ... It is too early to say who or which institution was behind the murder. But it has proved to be too late for ... Bhutto and for any chances of believing ... Musharraf's insistence that democracy in Pakistan is only an election away." Switzerland's Neue Zuercher Zeitung notes that Bhutto's murder now "puts the election in Pakistan in question." More precisely, the Hindustan Times adds in its editorial, "It seems impossible now for elections to go ahead in the foreseeable future, not least because of one contender being horrifically taken out of the contest, but also because elections are the farthest thing from the mind of the people of Pakistan. With [yesterday's] deaths, it seems that the post-9/11 destabilizing forces in Pakistan have been joined by more sinister, historical forces that mark their presence throughout the country's bloody history." As the Indian daily sees it, Musharraf, who only recently reluctantly stepped down as the head of Pakistan's army, a job he held even while serving as president, has a lot of explaining to do. The paper advises: "Musharraf has much to answer for. For Pakistan has come to this. The light of Larkana [Benazir Bhutto's hometown] has gone out of Pakistan. With it, so seems any chance of peace, never mind of democratic peace, in that unfortunate, unfortunate land."

So far, no one in the Bush administration, which has showered Musharraf's regime with billions of U.S. taxpayer dollars for assistance in its aimless "war on terror," has dared to point an accusatory finger at the dictator or his minions for Bhutto's murder. However, Italy's Corriere della Sera and other news outlets report that Bhutto's husband plainly asserted, referring to Musharraf: "It is the work of the government."

Nawaz Sharif, another former prime minister of Pakistan whom Musharraf's government had banned from taking part in the forthcoming parliamentary elections, also stated unequivocally after the assassination: "Pervez Musharraf is responsible and accountable for what happened today ... I hold his policies responsible for landing this country into [this] terrible mess ... Nobody has confidence in Musharraf. Everybody wants him to step down...." (Indo-Asian News Service)

For the Pakistani newspaper the Nation, the killing of Benazir Bhutto has left Pakistan "badly bruised and in a state of utter shock." Musharraf has called for three days of nationwide mourning; banks, government offices and schools will be closed. Regularly scheduled trains have been cancelled, along with domestic flights of PAI, Pakistan's national airline. The Nation wags a finger at Musharraf and warns that, while his "appeal for calm at this critical hour is appropriate and must be heeded," this should also be "a moment of reflection for him" about how "pervasive and dangerous the extremist mindset, not much in evidence in the 1990s, has become since he joined hands with the U.S. in its so-called war on terror. He should be taking steps to pave the way for the restoration of real democracy."

However, notes an Indo-Asian News Service news analysis, the assassination of Bhutto "totally derails the American-sponsored plans [for] ushering in democracy in Pakistan. In the absence of Nawaz Sharif, who has been barred from contesting the polls, the January election will lose whatever the modicum of credibility it might have had and should ideally be postponed. The West had hoped ... Benazir [Bhutto] would provide a secular alternative to Musharraf and [help] channel the opposition to [his] regime through a secular political party." Now, though, within the Pakistan People's Party, Bhutto has no immediate, obvious successor. IANS notes that her husband, "who is powerful" within the organization, "is not popular with the masses" and lacks his late wife's charisma.

Yesterday's assassination, IANS reports, "has put the Musharraf government in [a] bind. If it goes ahead with the elections in the absence of Benazir [Bhutto] and Nawaz [Sharif] as candidates for the post of prime minister, they will not have any credibility. On the other hand, if it cancels them, it will be a major psychological victory for the militants ... Assassination of arguably the most popular leader of Pakistan is extremely dangerous for the Islamic state. It shows that the state created on the basis of an exclusivist ideology that abhorred pluralism is finding it extremely difficult to make a transition to a democratic moderate state."

By contrast, in Britain, the Times' foreign-affairs analyst, Bronwen Maddox, argues that Bhutto's assassination "does not mean the death of democracy in Pakistan -- provided that elections are held soon." Maddox believes Bhutto's PPP "will very likely want the polls to go ahead." After all, if the slain political leader's party "can produce a plausible leader, [it] could hope to sweep to a powerful lead on the back of the 'martyr effect.'" Meanwhile, "Britain and the U.S. are also likely to argue that elections are the best way to retrieve stability," and Bhutto's "fervent supporters will blame Musharraf" for yesterday's murder. That could be risky, Maddox notes. Yesterday alone, violent protests broke out in several cities in Pakistan following the news of the assassination. Musharraf has warned that the country faces the threat of similar unrest erupting nationwide. If it does, Maddox predicts, "judging by his recent reflexes, Musharraf may well invoke that threat of violence as justification for a new security crackdown."

The Financial Times cites New Mexico Gov. Bill Richardson, a candidate for the Democratic presidential nomination and a former U.S. ambassador to the United Nations, who, in response to the news of Bhutto's murder, said: "President Bush should press Musharraf to step aside, and a broad-based coalition government, consisting of all the democratic parties, should be formed immediately. " Richardson emphasized that it is in the "interests of the U.S. that there be a democratic Pakistan that relentlessly hunts down terrorists." He said: "Musharraf has failed, and his attempts to cling to power are destabilizing his country. He must go."