Which Democrat is a winner?

With the Iowa caucuses looming, victory-hungry Democrats want to know -- who is the most "electable"? Here's our best (totally wild) guess as to how each candidate might fare in November. 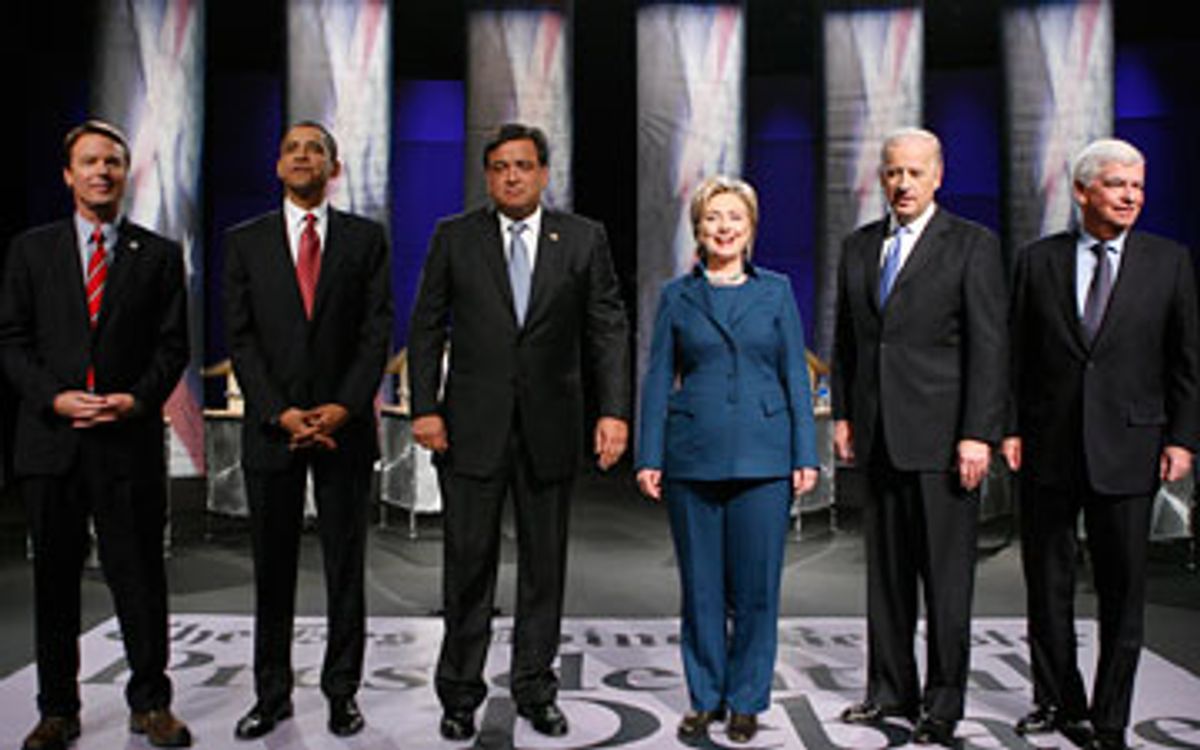 Teesha and Karl Kirschbaum are camping out in their empty house in Clear Lake (110 miles north of here) just so they can caucus on Jan. 3. The young couple are moving to Seattle -- and their furniture and clothes were packed up and shipped west the day after Christmas. But the Kirschbaums, who were both avid supporters of Howard Dean in 2004, have stayed behind with a few possessions and their dueling Hillary (Teesha's) and Obama (Karl's) signs on the front lawn.

Karl, who builds racing cars, is firm in his preference for Obama. "It's going to take a lot to swing my vote -- and it won't be my wife," he said defiantly in mid-December when I met him at a going-away party for the couple at the Coffee Cat cafe in Mason City. But Teesha was shaky in her allegiance in a way that would be familiar to many caucus-goers. "I'm leaning Hillary," she said at the party. "But I'll probably decide for sure when I'm in the room on caucus night. This year I like them all."

Desperate to detect a trend in this land of deadlocked Democratic polls, I telephoned Teesha (a vocational rehabilitation specialist) on Thursday to gauge the sentiments of this one-woman focus group. "I still don't know," she said, after describing herself sitting in an empty room aside from a single chair and her laptop. "It all comes down to who has the best chance of winning."

Electability may be the most important factor churning in the minds of the undecided and loosely aligned voters whose last-minute decisions will tilt the caucuses. "The undecideds are just sitting there," said Julie Jensen, the Iowa coordinator for Chris Dodd. "We had an event in Des Moines last night for 100 people -- and half of them were undecided."

Longtime Iowa Democratic strategist Pete D'Alessandro, who is on the sidelines in the Democratic presidential race, noted that, traditionally, electability is not a major factor in the party primaries. "But it might be part of what people are looking for in Iowa this year," he said. "Still, if electability is part of the equation, you should be seeing a surge for [Joe] Biden, Dodd or [Bill] Richardson."

Fence-sitting Democrats can check the candidates' Web sites for their positions on issues, or they can rank their favorites based on how often they use buzzwords like "change" and "experience" in their TV commercials. But when it comes to determining which Democrat is most likely to beat the Republicans next November, there is no right answer or even much reliable data.

Four years ago, Iowa Democrats went for John Kerry in large measure because they believed that this Vietnam War hero would offer the strongest challenge to George W. Bush. These caucus-goers could not have foreseen that Kerry would be photographed windsurfing and that his consultant-clogged campaign would fritter away a month before it made a half-hearted effort to respond to the Swift Boat ads. And predicting the arc of the Kerry campaign was theoretically possible since the Massachusetts senator had been in Washington for 20 years and everyone knew his opponent.

This time around, all bets are off. A campaign against John McCain -- the only major-league Washington figure in the GOP race -- might require a different kind of candidate than a battle against a former governor like Mike Huckabee or Mitt Romney. And if Rudy Giuliani were somehow the GOP nominee, the unprecedented campaign calculus would probably blow the circuits on a supercomputer.

Theoretically, it might be possible to calculate electability based on horse-race numbers in the national polls. But since the Republican candidates (even Giuliani and McCain) remain ill-defined figures to many voters, it is difficult to find much meaning in head-to-head competitions. A national NBC-Wall Street Journal poll, conducted in mid-December, found that Clinton would defeat Giuliani by a margin of 46 to 43 percent in a hypothetical matchup. But if Barack Obama were the Democratic nominee, the gap would widen to 49 to 40 percent, according to the survey.

Nearly 11 months before the presidential election, differences like this are not meaningful, even before you throw in the poll's 3 percent margin of error. So many things can change -- both in terms of the images of the candidates and the problems facing the nation -- that all crystal balls should come with the kinds of warning labels emblazoned on cigarette packs.

Contemplating electability would make anyone feel like an oafish detective missing an obvious clue. Everything will be apparent in hindsight, but for now victory-hungry Democrats will have to make do with little more than hunches and half-truths. But here are some (let's be honest here) guesses about how the six Democrats competing in Iowa, who do not include Dennis Kucinich and Mike Gravel, might fare in November as the nominee.

The candidates are listed alphabetically.

Joe Biden
Assets: No Democrat has a surer grasp of foreign policy, which could be a significant advantage if McCain or Giuliani were the Republican nominee. Biden -- who raised his two sons largely by himself after his wife and young daughter were killed in a 1972 automobile accident -- boasts an inspiring personal story. Biden has also demonstrated a consistent ability to dominate in the debates -- and has even learned (sometimes) the virtues of brevity.

Liabilities: Biden is a candidate who does not understand the political virtues of what is called "message discipline." (This cousin of bondage requires a candidate to repeat the same phrases even when he is bored out of his mind.) Biden has also made several verbal slip-ups in this campaign (such as calling Obama "clean" and "articulate") that would be far more damaging if repeated in the fall campaign.

Hillary Clinton
Assets: Until recently, she seemed to be running a campaign and maintaining a record that seemed more fixated on minimizing risks in the general election than on inspiring Democrats in the primaries. Despite her debate stumble about driver's licenses for illegal aliens, she is the apostle of message discipline -- the anti-Biden, if you will. She inspires loyalty: Most of the key members of her campaign team have been with her (and Bill Clinton) in the political foxholes for more than a decade. Like Obama, she would raise record-setting money if she were nominee. And more than any other candidate running, she understands the rigors of a national campaign.

Liabilities: In poll after poll, she records far higher negative ratings than Obama or Edwards. An Associated Press-Yahoo poll, conducted in mid-December, found that 47 percent of the voters viewed her "unfavorably." (With slightly different question wording, 44 percent of those surveyed in the NBC-Wall Street Journal poll had "negative" feelings about her.) These anti-Hillary voters may end up not voting for any Democrat, but these polling statistics do suggest that she is the candidate operating with the smallest margin for error. While the idea of a woman president and a Clinton restoration may have long-term political appeal, she is the Democrat who has to work the hardest to prove her "likability."

Chris Dodd
Assets: A buoyant campaigner, he boasts a quarter century of experience on the Senate Foreign Relations Committee. Dodd -- a former Peace Corps volunteers who speaks fluent Spanish -- is the most zealous proponent of national service in the race. As a former Democratic Party chairman, he is also far less prone than Biden to foot-in-the-mouth disease.

Liabilities: Somehow Chris Dodd has not been able to break out of his niche as the generic Northeastern politician, a species that led the Democrats to defeat in 1988 and 2004. He also (like Biden) has a long Senate voting record for the Republican opposition research teams to exploit in attack ads.

John Edwards
Assets: As the only Southerner in the race, he is a master at making time-tested campaign lines sound as though he is speaking them for the first time. Despite media flaps over his hair care and the square footage of his house, Edwards developed a strategy for this race and has followed it to the letter. No candidate can better answer the why-I-want-to-be-president question -- and his populism may reflect the mood of the country better than the more cautious stylings of his rivals. Elizabeth Edwards may also come close to rivaling Bill Clinton as the most politically appealing 2008 spouse.

Liabilities: Despite having run for vice president in 2004, Edwards is probably the Democrat with the shakiest claim to being a foreign-policy president. Edwards is also the only first-tier Democrat to accept federal matching funds and the strict spending limitations that go with them. What this means is that Edwards would be effectively broke between the time he won the Democratic nomination and the while being forbidden under law from raising any more money. Edwards would, in effect, be a political orphan being supported by the Democratic National Committee and independent-expenditure groups.

Barack Obama
Assets: He is the only Democrat with the potential for changing the rules of politics. So far, he has managed to inspire a broad swath of Democrats without antagonizing rank-and-file Republicans. Certainly, no candidate in either party could match him at giving the acceptance speech at the convention. And he would rival Clinton in his ability to create a financial juggernaut so powerful that it would make the Republicans look like denizens of Skid Row.

Liabilities: On Election Day 2008, Obama would be less than four years removed from the Illinois state Senate. For all his phalanx of foreign-policy experts, Obama might be perceived as lacking the national-security experience of McCain or (yikes!) Giuliani. For all his natural eloquence, Obama has also underperformed in most of the Democratic debates. There have also been times when it seemed as though the candiate was pulling his campaign behind him rather than depending on it to propel him forward. Ultimately, Obama is the embodiment of the high-risk, high-reward candidate.

Bill Richardson
Assets: An engaging campaigner, he boasts the best résumé since George H.W. Bush ran for president. Not only would he be the first presidential nominee with Hispanic heritage, but Richardson would also be the first Democratic standard-bearer from west of the Great Plains.

Liabilities: Even on questions of policy (like his current proposal to try to remove Pervez Musharref from power and suspend military aid to Pakistan), Richardson has the capacity for letting his words race ahead of his thoughts. Despite his experience as U.N. ambassador and two terms as New Mexico governor, Richardson is often perceived as suffering from a gravitas gap.

There you have it -- and small wonder that Teesha Kirschbaum is confused as the caucuses near. On one hand, she worries about Clinton's electability. "Living in this part of the country, the Midwest," she said, "there are people I know who would not vote for a woman." But moments later in our conversation this week she added, "More than likely, I'll be going with Hillary. I'll be going with my gut." And, after groping with electability, that is probably how thousands of Iowa Democrats will make their decisions on caucus night.