The GOP insurgent appeals to some conservative Iowans because he "fears God." But will religious supporters bring him the light of victory? 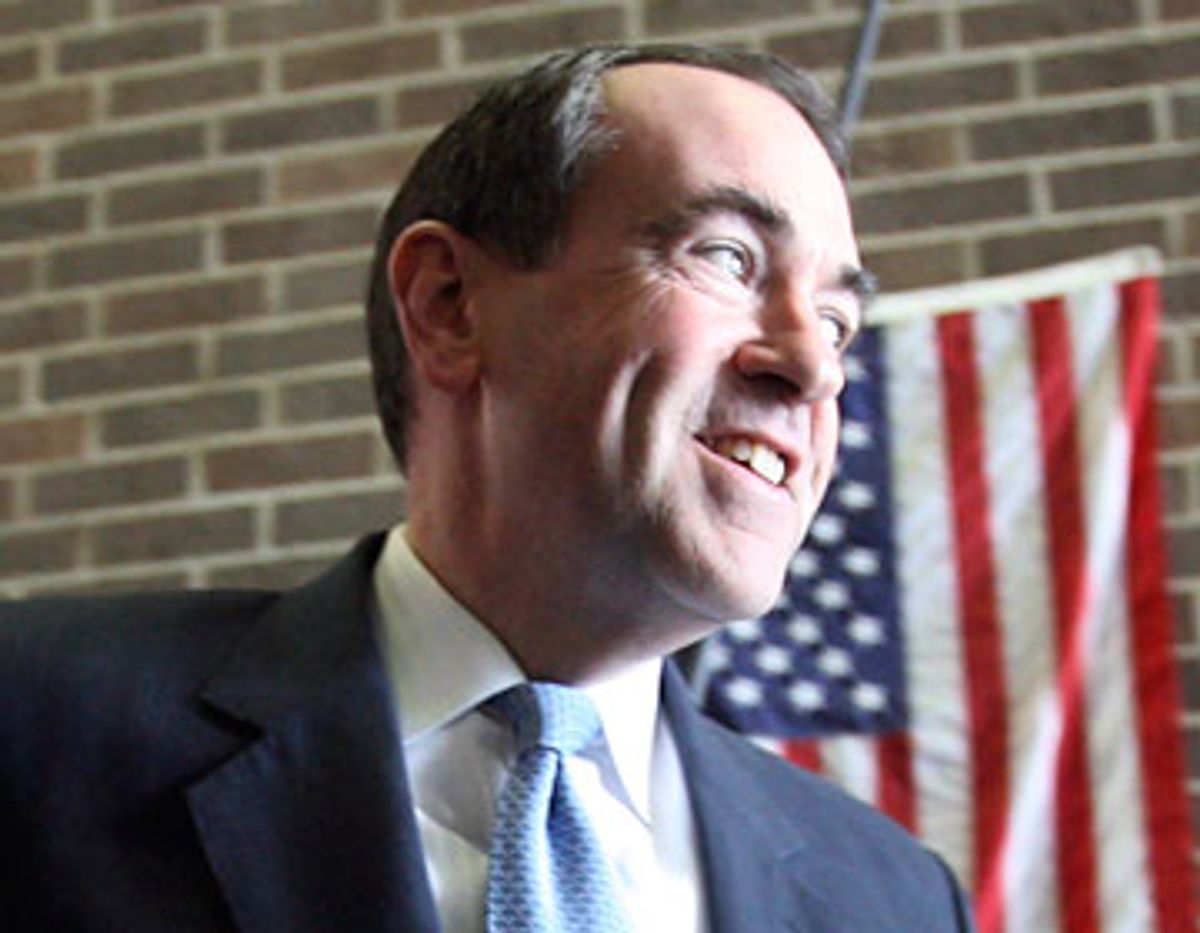 In his sermon, John Tank didn't quite tell the congregation at Grace West Church who to support for president. But that doesn't mean the church's assistant pastor shied away from politics on the last Sunday before the Iowa caucuses. "As a Christian, how do I stand up for what I believe? Maybe this year, it's actually participating in the caucus," Tank said. "This country is in desperate, dire need of Christian leadership."

And at Grace West -- and among many other communities of fervent conservative Christians across Iowa -- there's not much doubt which candidate that means. "Mike Huckabee," said Kevin Charter, a computer programmer, after services. "He's a follower of Jesus Christ. I just believe that he will lead our country with that faith and that truth." For his part, Tank is also supporting Huckabee (as, he believes, are most members of his flock), though IRS regulations for nonprofit groups mean he could not say so from the pulpit.

In the closing days of a Republican race teetering between Huckabee, the former Arkansas governor, and former Massachusetts Gov. Mitt Romney, strategists for both sides agree that Huckabee has enormous support among Iowa's evangelical Christians. What no one really knows, however, is what that will translate into on caucus night. Turnout is crucial, and Huckabee's campaign has not had the cash to build a campaign organization that can guarantee that his supporters will come out en masse. In essence, the once obscure Baptist preacher turned GOP insurgent is depending on, well, a leap of faith.

If conservative evangelicals wind up leading Huckabee to victory in Iowa, it may well be because they got their own vote out. While Romney's team is executing a massive, well-planned ground operation (like the leading Democratic candidates, who have their own enormous turnout machines in motion here), Huckabee's operatives can't really say for sure how many of his supporters will show up.

"That's everybody's guess," Bob VanderPlaats, Huckabee's state chairman, said with a laugh Saturday, when I asked him about turnout. Many of Huckabee's supporters were turned on to his campaign by friends, fellow home-schoolers, church members or family -- the sort of informal, preexisting networks and social ties that are considered more valuable than gold in the world of political organizing. But that means Huckabee's shoestring campaign doesn't have much in the way of reliable data, since his voters did more to find Huckabee than the other way around. Many Christian conservatives I talked to this week said they hadn't had a lot of official contact with Huckabee's team before they decided to back him. "It's not a superficial e-mail campaign, it's real," said John King, another computer programmer, who lives in Pella, Iowa, where he and his wife are home-schooling their six children. "It's moms having a weekly Bible study, and it's home-school dads having a basketball game together," said King's friend Greg Hartsill, who lives in Columbia, Iowa, and is home-schooling seven kids. "It's wherever we meet in life."

For voters like them, Huckabee's appeal is pretty plain. "He fears God," said Scott Bailey, from just outside Otley, Iowa, where he's president of a network of conservative Christian home-schoolers. "Apart from that, nothing else matters to me in a candidate." As he gave his stump speech at rallies over the last few days, Huckabee was occasionally interrupted by a "Praise God!" exclaimed from the audience. In Pella, a supporter had him autograph a copy of an intelligent-design textbook (though Huckabee, who famously indicated at a GOP debate in May that he didn't believe in evolution, prefers these days not to talk about exactly how humans arrived on Earth).

The campaign is well aware of who makes up his base. Huckabee ran one commercial calling himself a "Christian leader." His Christmas ad veered far from the usual fare, telling Iowans it was time to remember that "what really matters is the celebration of the birth of Christ" (and, of course, prompting an only-in-politics controversy about the whether the cross-shaped bookshelf behind him was sending a coded message to viewers). His response to attacks from Romney has been to remind caucus goers how much longer Huckabee has been against abortion and gay marriage than his rival. And allies in a group called "Trust Huckabee" have been running their own ads, independent from the Huckabee operation, highlighting Romney's earlier, less conservative positions on those issues, which are at the top of the minds of many Christian conservatives.

Yet Huckabee's standard speeches these days include less talk about God or faith or family values. He's focusing mostly on a populist economic message and on defending his Arkansas record on taxes and criminal pardons, under attack from a barrage of Romney ads. He clearly draws support from more than just church groups, too. Plenty of people who listened to him speak recently said they liked his easygoing manner, or his support for the FairTax plan (which would abolish the IRS and set up a national sales tax), without mentioning his religious views at all. Newly arrived campaign manager Ed Rollins said in an interview Saturday that advisors believe Huckabee has already gotten his faith across to people who want to hear about it; now it's time to shift to a broader message.

Still, aides of rivals and as well as Huckabee's are putting great weight on the evangelical vote, historically a reliable bloc of caucus-goers, as they look ahead to Thursday. But some of the people who are most excited about Huckabee will be attending caucuses for the first time, which always leaves campaigns worried about whether they'll make it there. "My wife's never been to caucus that I can remember, but she says she's going with me this time," said John Shaull, a Huckabee supporter who leads a team of Southern Baptist pastors in the Des Moines area. "And my son and daughter, who've never been to one, are saying, 'Hey, Dad, tell us more about it.'" Republican caucuses aren't as complicated as those for the Democrats in Iowa, but the experience is still different enough from regular voting to be confusing. Like many other candidates, Huckabee is distributing a "Caucus 101" instructional DVD at his events. Unlike many other candidates, Huckabee opens his by asking caucus-goers to pray on his behalf.

Meanwhile, the Christian vote is apparently not sacrosanct when it comes to the kind of dirty tricks that pop up late in every close election. At Grace West, John Tank showed the congregation an anonymous mailing he got last week, with no return address, warning pastors not to talk about politics at all or they'd "end up in the slammer." It was addressed, "Dear Fellow Christian," and seemed designed to scare the clergy at churches whose believers might turn out for Huckabee if their pastors made the caucuses a focus. (Romney, though, has been the victim of much nastier mail, in several states, playing on evangelical skepticism about his Mormon faith. Naturally, every campaign denies involvement in any of that.)

While state campaign chairman VanderPlaats says Huckabee voters are more likely to turn out than others because his candidate gives supporters something different to believe in, counting on some of the most devout people in the state can pose some unique challenges. Take Amy Banwart, who lives in West Des Moines and works at Grace West. She says she is 100 percent behind Huckabee, whom she calls "a believer in Christ Jesus, the only way to salvation," and she thinks he'll fight to end abortion and keep traditional marriage the only legal kind. But she won't be caucusing Thursday because, as she put it, she feels God calling her to coach the church's youth basketball team in a game that night instead.

A much bigger obstacle could be the Huckabee campaign's sheer lack of infrastructure. The Iowa campaign manager, Eric Woolson, told me "we will have the resources" needed to put on a ground game. And Huckabee aides say they're identifying 1,000 new voters daily. But Huckabee has only 14 paid staffers, while Romney has 10 full-time field staff in Iowa alone and "a couple hundred" volunteers organized in all 99 counties, according to his state spokesman, Tim Albrecht. "Romney seems to have a much stronger grass-roots effort at trying to pull people out to the caucuses in his support than Huckabee does," said Mike Demastus, the pastor at the Fort Des Moines Church of Christ, who's supporting Huckabee. "Huckabee is just, kind of, I think, maybe a little bit taking for granted that they're going to come out." Demastus got four phone calls from Romney's campaign on Saturday alone, asking whether he would support Romney. Every time he said he was for Huckabee, the caller asked patiently if there was anything that could change his mind. He's gotten almost no calls from Huckabee.

If Huckabee does win Iowa, in spite of Romney's superior operation built on millions of dollars, it would represent the kind of triumph of passion over organization that this state manages to produce every now and then. But that's not what Huckabee calls it. During an interview on NBC's "Meet the Press" Sunday (which aired in Des Moines just before most church services got under way), Tim Russert asked him if a victory here would be a miracle. "By my definition?" the one-time clergyman responded. "Yes, it would."