We know he's a "hope monger," but the rest of Obama's unconventional message is elusive. 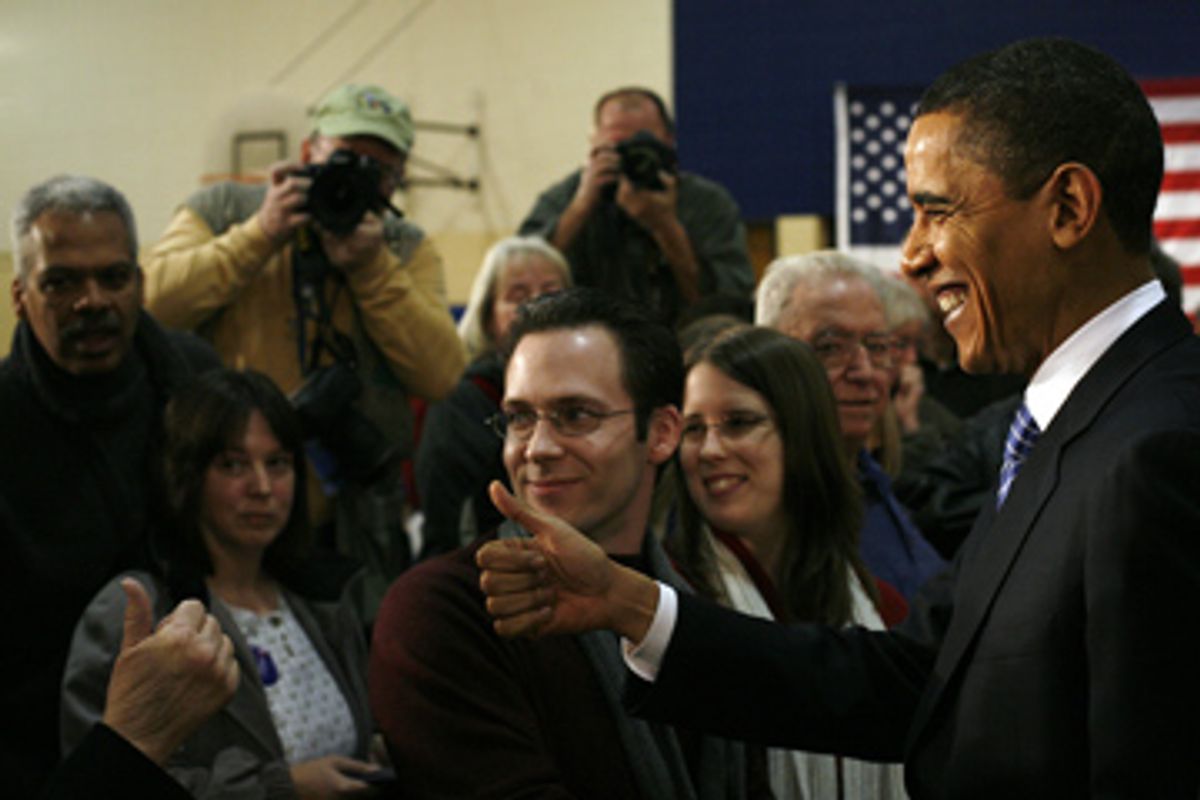 As Barack Obama hit the familiar chords of his stump speech in a gym here Tuesday morning, I sidled over to admaker Jim Margolis to ask in a whisper what he believed was the essence of his candidate's campaign. Margolis, who created the only memorable TV spots in the 2004 John Kerry campaign, replied, "The fundamental core message is that we're one country -- and we don't have to be divided." Just then, as if on cue, Obama hit the point in the speech when he decries the fractious politics of "tearing your opponents down instead of lifting the country up." As a small roll of applause swept across the room, Margolis smiled with the satisfaction of a mathematician who had just proved an obscure theorem and said, "You see?"

Nothing in politics is ever that simple, and Margolis did not claim that it was. But there remains, at least in my mind, something elusive about Obama's political appeal. The crowds are consistently good in Iowa, as they are (mostly) for Hillary Clinton and John Edwards. The revamped stump speech -- which was unveiled Thursday in Des Moines and which I have also heard in Mount Pleasant (Saturday) and now Perry -- is rich in inspiration and light on policy prescriptions. Again and again, the well-crafted 35-minute address repeats, with different words, the same formulation, the same inner logic that propels Obama's candidacy: "Americans all across the country are hungry for -- desperate for -- a new type of politics. Something different. A politics focused not on what divides us but on our common values and our common ideals, [focused] not so much on ideology, but practicality."

To someone schooled in traditional politics, Obama's rhetoric does seem at times vague. Although the famous line was briefly stripped out of the speech when it was delivered from a teleprompter Thursday, Obama is now back to mocking those who call him a "hope monger." As he put it in Perry -- in a reference that could apply to both Clinton and Edwards -- "Now we hear some other candidates speak almost scornfully about this idea of hope. They make it out that somehow your head's in the clouds. That Obama, he's talking about hope again. He's so idealistic. He's a hope monger. They imply that hope means you're naive or passive or you can't fight."

Skeptics can find a certain defensiveness here, a whiff that the attacks may be irking Obama as the Iowa campaign hits the finish-line tape. But now that we have reached the point in the Iowa race when all the leading Democrats candidates are depending on the power of repetition –- delivering the same speech in every setting -- there is the risk of seeing more in a few altered words in the candidate's delivery than was intended.

Still, as I listen with a bit of wonder to Obama's rhetoric, I worry as a political reporter if I am missing something. I understand the cautious establishmentarian campaign that Clinton is waging. I grasp that Edwards is following the standard insurgent's playbook by running as an outsider who will shake up the system. But Obama is following his own compass -- setting out on a path different from those of former Democratic presidential contenders, even new-politics crusaders like Gary Hart (1984) and Bill Bradley (2000).

In Perry, it certainly seemed to be working. After the speech, I talked with Karen Nielson, a teacher from nearby Adel. "I've been leaning towards Hillary all along," she said, explaining that she had seen Bill Clinton speak last week and had signed a caucus card pledging her troth to the former first lady. "But after hearing Obama today, I'm in awe." Nielson, who just had a milestone birthday, said, "If you're trying to achieve change, I think Obama is the one to go with. To lose heart when you're 50 is an absolute travesty."

As Obama attempts to shape his destiny in Iowa on Thursday and New Hampshire on Jan. 8, it is easy to forget the wonder of it all. Four years ago, this mixed-race son of Kenya and Kansas was a long-shot Senate candidate whose political experience did not extend beyond the Illinois state Legislature. In Perry, as he has in recent days, Obama quoted his wife Michelle as saying, "This is the time for us to run because we are still almost normal."

In the candidate's rendering, that phrase "almost normal" refers to the family living a middle-class life until recently, albeit one rich with all the potential that comes when both husband and wife boast degrees from Harvard Law School. As Obama told the 300 Democrats in Perry (population: 7,500), "Five years ago we had just finished paying off our student loans ... we hadn't been able to set up a college fund for our kids, we had some credit-card [debt] outstanding, we were living in a condo too small for our two kids, I was going grocery shopping, and she was going to Target. She still goes to Target."

Obama's we-shop-at-Target riff fell shy of the target in Perry, a community not rich in upmarket shopping opportunities. But Obama is not John Edwards -- and little of the fledgling senator's appeal flows from his common-man credentials. In a sense, Obama is the candidate who thrives on being different, probably different in heritage from anyone in Perry or Adel. As Margolis, the Obama admaker, put it, "He represents the melting pot that is America."

On the cusp of the New Year, it is beguiling to believe that Obama's appeal-to-our-better-angels politics represents the wave of the future. But there is also the skeptical feeling that the Bad Old Politics are not yet ready to be dragged offstage by a man with scythe.