The CEO candidate tries to grind out an expensive victory over a surging, underfunded and baffling upstart. 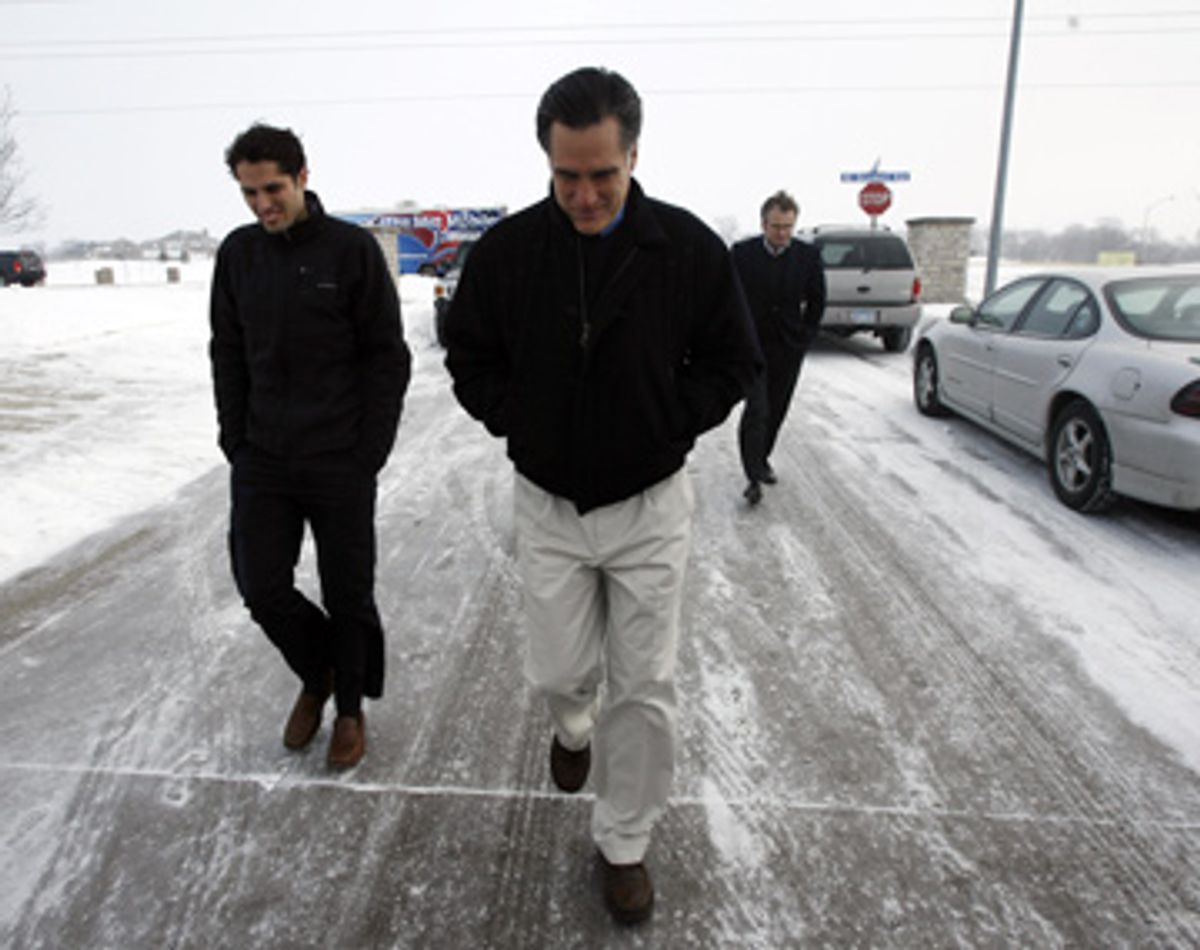 When Mitt Romney tells a joke, he makes sure you get it.

"I need you to go out and go to the caucus," he said Monday afternoon at a campaign stop in Manchester. "If you're planning on voting for someone else, there is the Orange Bowl on if you'd like to watch ... just kidding." A couple hours later, in Waterloo, he ventured another crack. "Go to the caucus, I need you to go there and vote a few times," Romney said. "Just kidding, once will do." At a New Year's Day house party in Clive, he changed the script a little. "Go out on caucus night, vote a few times if you will," he said, before issuing a quick clarification. "I'd like you to be able to do that."

The former Massachusetts governor is racing to hold on to a lead here in Iowa over former Arkansas Gov. Mike Huckabee that has morphed from apparently insurmountable to apparently unsustainable over the last month. With the two now neck and neck, Romney is running an efficient, smooth and carefully managed campaign and isn't taking any chances -- not even the risk someone might misunderstand an obvious and rather ham-handed laugh line. He zips from town to town with lightning speed, gives a stump speech that rarely breaks the 15-minute mark, shakes a few hands, and launches back onto the snow-lined highways, the better to get to the next event and share his 21st-century Reaganism with the next batch of Republican caucus-goers.

Yet in spite of that methodical discipline, and an earnest optimism in his message (even if it contrasts with the muck his TV ads dump on Huckabee and Sen. John McCain), when Romney looks ahead to Thursday night, he faces the nightmarish prospect of losing to Huckabee. Romney's chief rival is running a campaign that has only the vaguest idea whether its supporters will turn out, can't get its schedule organized for the hordes of press following him, and pulled one of the weirder stunts in recent politics on Monday. Huckabee played an over-the-top attack ad aimed at Romney for a room full of reporters, but only after promising he wouldn't actually air it on television. But the final Des Moines Register poll on New Year's Eve -- awaited more eagerly by campaign operatives than the stroke of midnight -- still showed Romney trailing Huckabee by 6 points in Iowa. (Don't put too much stock in that poll, or any others here, given the difficult math involved in caucus predictions.)

Romney, who runs for president like a corporate CEO, clearly doesn't enjoy the idea of falling behind a rival whose campaign style sometimes seems more like, "Hey kids, let's put on a show!" While his operation has poured millions of dollars into "comparison ads" that highlight the low points of his rivals' records, he's hitting as many as seven events a day all around the state. His top-notch get-out-the-caucus organization could still pull him to victory, but facing the prospect of a crippling loss to an outspent underdog, he's working harder than ever now to finish strong.

Strength, in fact, is the theme of Romney's closing tour of the state: He says he'll provide it. In person, he leaves the dire warnings to rivals, like Rudy Giuliani, who reminds voters constantly of the threat of more terrorism, or McCain, who put up a Web ad on Tuesday that aims to scare voters away from Romney with footage of post-bomb carnage. Romney has a way of making governing sound like just another Harvard Business School case study -- sure, it might be hard, but it's solvable. His speech isn't usually long enough to dwell on specifics, but he ticks through some problems -- "radical jihadists," healthcare (which won't be solved with "socialized medicine"), education, immigration -- and breezily promises to use his famed management skills to fix them. "Our future is promising and bright, but only if we make the right decisions," he told the party in Clive. "This is a remarkable land, with remarkable people."

That party, held at the home of local conservative talk radio host Mac McKoy, made Romney's Reagan shtick even more overt. He stood on a chair in front of a signed photo of the Gipper, conveniently located so the TV cameras could catch the 40th president's smiling face behind the would-be 44th's. His twin messages of competence and confidence are resonating well enough with his supporters that some of them are reciting the campaign's own talking points. "He's had a record of accomplishment, whatever he's done, and I think he'd be a good executive," said Tom Gaard, a retired financial manager from Clive. "He has business experience as well as government experience," said Julie Smith, a pianist from Cedar Falls. Though he used to say he was pro-choice, and he governed a state that allowed gay marriage, Romney's recent shifts on those issues appear to have convinced at least some conservatives that he's one of them, even if the hardcore majority flock to Huckabee.

But behind the sunny speeches, Romney also has a mercilessly professional political operation gearing up to deliver his people to caucuses -- and to discourage undecided voters from supporting anyone else. While he released a new pro-Romney ad Monday, most of his commercials running on Iowa TV go right after Huckabee. The one I've seen most often quotes Condoleezza Rice calling Huckabee's foreign policy "ludicrous," slams his fiscal policy, and informs viewers that he pardoned or commuted more than 1,000 people, "including 12 murderers." Kevin Madden, Romney's spokesman, sent me nine e-mails on Monday alone, most of them pointing out a Huckabee gaffe or a lowlight from his Arkansas record.

Meanwhile, an army of staffers -- some of whom the campaign considers volunteers, even though they're on the payroll -- is ready for Thursday, with tactics sophisticated enough to match anything else on the ground here. Romney workers are calling Republicans constantly and sending reminders in the mail. The campaign was confident enough in its voter ID system to send Romney into heavily Democratic towns in eastern Iowa Monday, calmly contacting and drawing the area's few Republicans to hear him speak. "One constant of the whole thing, from Jan. 1, 2007, to Jan. 1, 2008, is our organization," said Tim Albrecht, his Iowa spokesman. "We set out to build the organization precinct by precinct and reach every corner of the state."

The TV and mail advertising blitzkrieg, though, has done little to endear Romney to any of his rivals. "He's given up on trying to persuade anybody that he's the right candidate," said McCain's Iowa chairman, Dave Roederer. "He's just trying to persuade them that everybody else is the wrong candidate." Another Republican strategist said, with some relish, that a Huckabee win here would be "a massive upset" given everything Romney's spent in the state. Huckabee and McCain have practically signed a mutual defense pact over the campaign's closing weeks, with each side rushing to protect the other from every Romney attack. But even though few of Romney's rivals would mind if he lost, the conventional wisdom in Des Moines appears to be running against Huckabee; skeptics think he has peaked too soon and withered under Romney's fire.

The reasons many establishment operatives still see a Huckabee win as unlikely, polls notwithstanding, were underscored by Monday's debacle. Huckabee announced to a crowd of reporters that the anti-Romney commercial he'd cut the day before would not, in fact, ever be broadcast -- and then proceeded to show the ad to the reporters. Huckabee surprised even some of his own staffers with the ploy. The campaign had apparently been divided about whether to put the ad up in the first place, but the move wound up looking either brazenly cynical or shockingly stupid -- or both -- and the reaction from the political press was withering.

It was the reaction from the Romney campaign, though, that may have been more telling. Spokesman Madden sent out a careful press release that linked the fiasco to the Romney message that Huckabee can't handle scrutiny. But when I talked to Madden later in the day, he just sounded flabbergasted. Romney's team had watched the nation's top political reporters laugh in Huckabee's face three days before the caucuses, to little avail. They had won the news cycle, but not the war. They still couldn't figure out quite what to make of their candidate's biggest rival -- or how to make him go away.