Iowa is either the beginning or the end for the 2004 vice-presidential nominee, who has more to gain and more to lose than his two chief rivals. 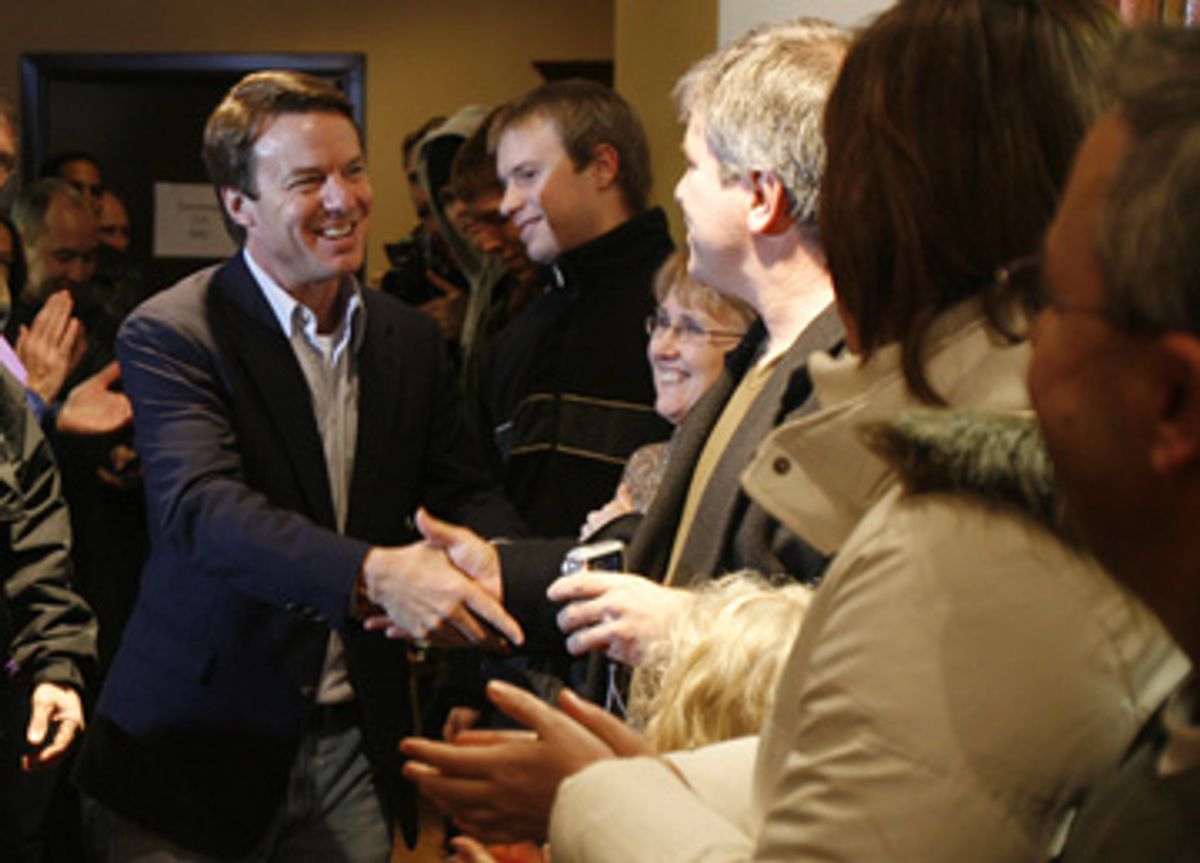 As the John Edwards 36-hour marathon tour of the first caucus state rumbled toward its final stops, a rawness born of sleeplessness and emotion took command. Edwards, whose rhetoric is normally perfectly coiffed, stumbled over the details of a family story about his grandmother in Fort Madison. Elizabeth Edwards, a stickler for proper grammar, mangled her diction in Burlington while talking about Iowans who "casted their votes." As the bone-tired candidate (surviving on Diet Sprite and catnaps) confessed to more than 500 supporters in Cedar Rapids as darkness fell Wednesday evening, "I'm still thinking a little bit, my brain is still functioning a little bit."

Beyond these foibles of fatigue, there is the drama of a candidate on the edge. No one running for president in either party has as much at stake in Iowa. If the 2004 vice-presidential nominee wins here -- and that remains a strong possibility unless Thursday night brings out a torrent of new caucus-goers -- he is suddenly vaulted into a competitive race in New Hampshire and beyond with Hillary Clinton and Barack Obama. But if Edwards falls short here in his second bid for the White House, all the dreams, all the fundraising, all the speeches, all the bravery in the face of his wife's incurable cancer will have been for naught.

Four years ago in the final days before the caucuses, Edwards was an electrifying candidate, the kind who inspired voters to try to touch him physically, as he raced across the state with his final-argument speech about the "Two Americas." This time around, the former trial lawyer cannot win a let's-make-history contest against the first woman and the first African-American to wage front-running campaigns for president. Instead, Edwards is campaigning as the unyielding champion of hard-pressed Americans as he wages battle against "corporate greed." Despite the cheap-shot claims that a candidate who built a gargantuan house in North Carolina and briefly worked for a hedge fund cannot be sincere in his passion for the poor, there is an underappreciated core of consistency to Edwards.

During an early presidential campaign foray to New Hampshire in late June 2002, I vividly recall Edwards -- then a North Carolina senator -- talking bitterly to a roomful of Democrats about the way lobbyists swarmed around legislators as they stepped off the Capitol elevators. True, his populist rhetoric was not nearly as full-throated during the 2004 campaign -- nothing as naked as his claim Wednesday in Fort Madison, "The truth is that corporate greed is stealing your children's future as sure as I'm standing here." But Edwards has always been an outsider, even when campaign consultants like Bob Shrum were touting him as the Next Great Southern Hope after his election to the Senate from North Carolina in 1998. He is the lonely long-distance runner (Edwards' daily regimen) who shaped his campaign with his wife at her bedside last spring as they dealt with the news that her breast cancer had returned.

In Iowa City -- at a raucous indoor rally at a coffee shop so claustrophobic that exhaling required the permission of your neighbor -- Edwards asked voters "to show that in Iowa we're going to have an election and not a coronation." This was the plea of a candidate who has been outspent in Iowa better than 2-to-1 by Obama and Clinton -- and yet is still in the game on caucus eve.

Even though Edwards has put out policy proposals as detailed as those of any Democrat in the race, in the closing hours of the Iowa campaign (and conceivably his political career) he wants to be judged by his heart and not his head. "This [fight] is not intellectual or academic or philosophical for me," Edwards said in Fort Madison, implicitly distancing himself from the cerebral Obama. "This is driven by my life experience. I take it very personally." In her brief introductory remarks at the next stop in Burlington, Elizabeth Edwards tellingly echoed this thought. "I want you not to think about this in the abstract," she said.

This race is personal for Edwards in a way that no other candidate could possibly imagine. In 2004, when he waged an uphill battle against John Kerry until the end of February, Edwards sometimes gave off the impression that he was running as the candidate that his consultants wanted him to be. This time around Edwards is running as the candidate that he and Elizabeth always wanted him to be.

In technical terms, the Edwards campaign in Iowa is the most traditional of the three leading Democrats. The guiding theory is that while turnout will be higher than the 122,000 who caucused in 2004, it will not jump much beyond 140,000. Obama (with his appeal to younger and less partisan voters) and, to a lesser extent, Clinton (whose Iowa base is older women) are depending on a sharp jump in turnout on caucus night. The Des Moines Register's final pre-caucus poll on Dec. 31 gave Obama a startling 7-percentage-point lead over Clinton, with Edwards just behind Clinton. But the Register survey -- which aroused skepticism among many polling professionals -- predicted a tidal wave of independent voters, a pattern that defies precedent.

Joe Trippi, who was Howard Dean's 2004 campaign manager and now is the top strategist for Edwards, has seen it all in Iowa. "On New Year's Eve, I realized that I spent half the evening saying to everyone that the Register's poll had to be wrong -- there's no way that turnout could be 220,000," Trippi recalled. "Then I realized that before the caucuses in 2004, I was predicting that turnout would hit 220,000. I'm pretty sure that I am skeptical this time around because I am wiser and not because of who my candidate is."

This final paragraph is being written at the crowded Back Alley Deli in Grinnell, a small college town, as Edwards gives his stump speech. Any second now, the populist crusader will announce, as he has at virtually every stop, "This is the fight of my life." It is no exaggeration. Here in Iowa Thursday night, John Edwards -- with no Senate seat to return to, with a wife who is defying a deadly diagnosis -- will cast his fate to the wind.