With his victory in Iowa, the former Baptist minister deals Mitt Romney a blow -- but could John McCain be the biggest winner? 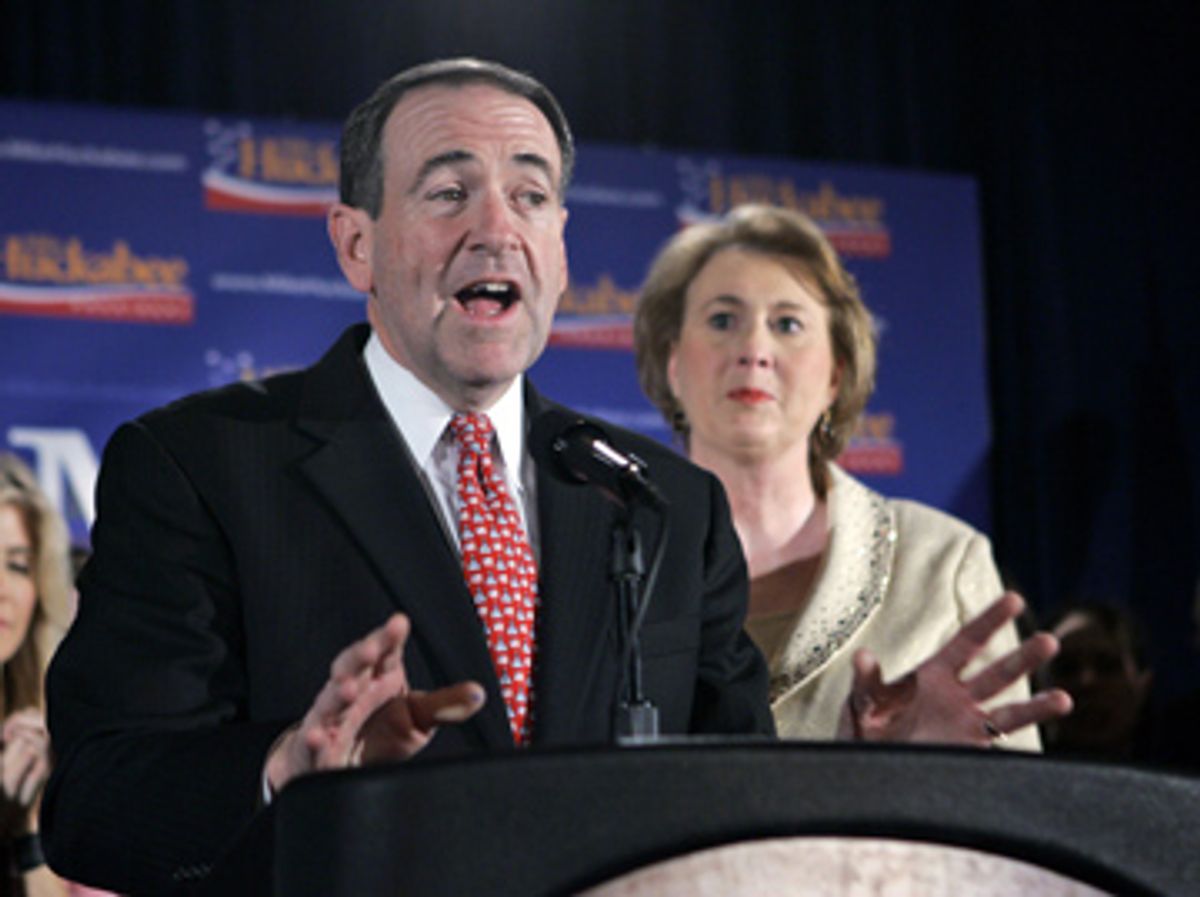 It was a victory for passion over precision, for effervescence over efficiency, for folksiness over finance. Mike Huckabee didn't just beat Mitt Romney in Iowa Thursday night, the former Arkansas governor handed his Massachusetts counterpart a defeat that one Republican president might be tempted to call "a thumpin'."

Outspent by nearly 20 to 1, and hammered constantly on TV and in the mail, Huckabee marched ahead of a ragtag army of Christian conservatives and Republican populists (if such a thing still exists) to a victory in the first test of the 2008 presidential campaign. Coupled with Barack Obama's win on the Democratic side, it's tempting to imagine you could hear Iowans speaking en masse to repudiate the entire political system. "Tonight what we have seen is a new day in American politics," Huckabee told roaring supporters at his victory party Thursday night. "A new day is needed in American politics, just like a new day is needed in American government."

But finding a lasting lesson in Huckabee's victory may not prove as easy as that -- just as Huckabee may not find it so easy to carry his momentum to New Hampshire and beyond. The Washington-to-Wall Street establishment that he railed against more and more as he rose in the Iowa polls won't sit back and watch now that Huckabee has shown he's hard to stop; it'll just try harder to stop him. The spin out of the GOP tonight was that Obama's win will help draw out the Democratic nomination fight -- and that if you're waiting for the praise for Huckabee, keep waiting. On CNN, following the vote, Republican National Committee chairman Mike Duncan changed the topic immediately from Huckabee to Obama. Democratic operatives think Huckabee would be easily destroyed in a general election by just about any one of their candidates, and the GOP power brokers appear to agree.

Before it comes to that, rivals who are less stilted -- in states where voters show more tolerance for aggressive campaigning -- will test Huckabee's ability to laugh off attacks better than Romney did here. And New Hampshire's "Live Free or Die" libertarians may not respond as well as Iowa's fervent evangelical Christians to a former Baptist minister who wants to amend the Constitution to ban abortion and gay marriage. Huckabee told TV interviewers Thursday night -- and his advisors repeated the point to the rest of the press corps -- that his win wasn't just fueled by religious conservatives. That's true enough, but entrance polls showed that evangelicals turned out in force, making up nearly 60 percent of the Republicans who caucused. It's hard to imagine Huckabee would have come in first without the enormous support they gave him.

Still, Huckabee and his aides left Iowa feeling good. The conventional wisdom about him has been mostly off the mark for the entire campaign: First he was written off as the charming candidate who couldn't raise enough money to compete; then, once he got traction, he was the insurgent who peaked too soon to pull out a win. (One pundit who got it right was former President Bill Clinton, a fellow native of Hope, Ark., who for weeks was telling anyone who would listen that Huckabee was the real deal, and who showed up Thursday at Huckabee's Des Moines headquarters for a visit.)

Aides say Huckabee could finish in third or better when New Hampshire votes on Tuesday. "Now we've got a long journey ahead of us," Huckabee said a few hours before boarding a charter flight to Manchester. "I wish it were all over tonight ... If this were a marathon we've only run half of it -- but we've run it well." South Carolina, with plenty of its own Baptists, might be even more welcoming for him.

For a few of Huckabee's rivals, the picture is a little clearer. Romney, the would-be heir to Reaganism, claimed "the silver medal" in Iowa. And despite his financial juggernaut that pushed better-known rivals like John McCain and Rudy Giuliani out of the race here months ago, Romney said he had accomplished much just by beating them. But the nine-point loss to Huckabee in Iowa should help hasten Romney's fall. It won't help him persuade many Republicans that he has what it takes to win next November. His campaign did just about everything exactly as he and his advisors intended except finish first. "I'm glad that Governor Romney is happy with a silver, but my experience in politics is that there are no bronzes or silvers," said Huckabee's campaign chairman, Ed Rollins. (This was just after Chip Saltsman, the campaign manager, said at the same microphone that the Huckabee folks wouldn't comment on Romney's fortunes.)

Giuliani, meanwhile, barely bothered to campaign in Iowa, and finished a distant sixth, well behind the Ron Paul revolution and ahead of only Duncan Hunter and Alan Keyes. "The race is wide open," campaign manager Mike DuHaime said in a press release sent out almost immediately after Huckabee was declared the winner. Giuliani could lose three more primaries badly before he even gets to Florida's, on Jan. 29, and begins to test his strategy of picking up delegates later in the race.

And then there's McCain, the one-time front-runner. A resurgent McCain spent the night already camped out in the Granite State, waiting to pounce on Romney, a man he clearly doesn't like or respect much. "We are very pleased with the results in Iowa," a McCain advisor told me late Thursday night. "Couldn't be happier." McCain's campaign had been openly rooting for Huckabee to knock off Romney.

"You can make the case that McCain's chances are better now than any time in the last six months," a Republican strategist, who is neutral in the nomination fight, told me. McCain has the foreign policy experience to make Huckabee's utter lack of it look bad without even going after him. And McCain is already trying to drag the campaign against Romney toward the issue of national security; if he succeeds there, he'll have a step up on Huckabee later.

With 96 percent of precincts reporting Thursday night, McCain trailed Fred Thompson -- who actually campaigned in Iowa, to the extent he was actually campaigning anywhere -- by only 273 votes in the battle for third place. By the complicated logic of a three- or four-way race, McCain can make a serious claim that he wound up as the ultimate strategic winner of the Republican Iowa caucuses. A year after McCain tried, and failed, to set himself up as the clear favorite going into the nomination fight, things could be moving his way again, thanks to a weak field and a big Iowa upset by another candidate. Only in politics.