The debate was rich in sound and fury, but did little lasting damage to unruffled frontrunner Barack Obama. 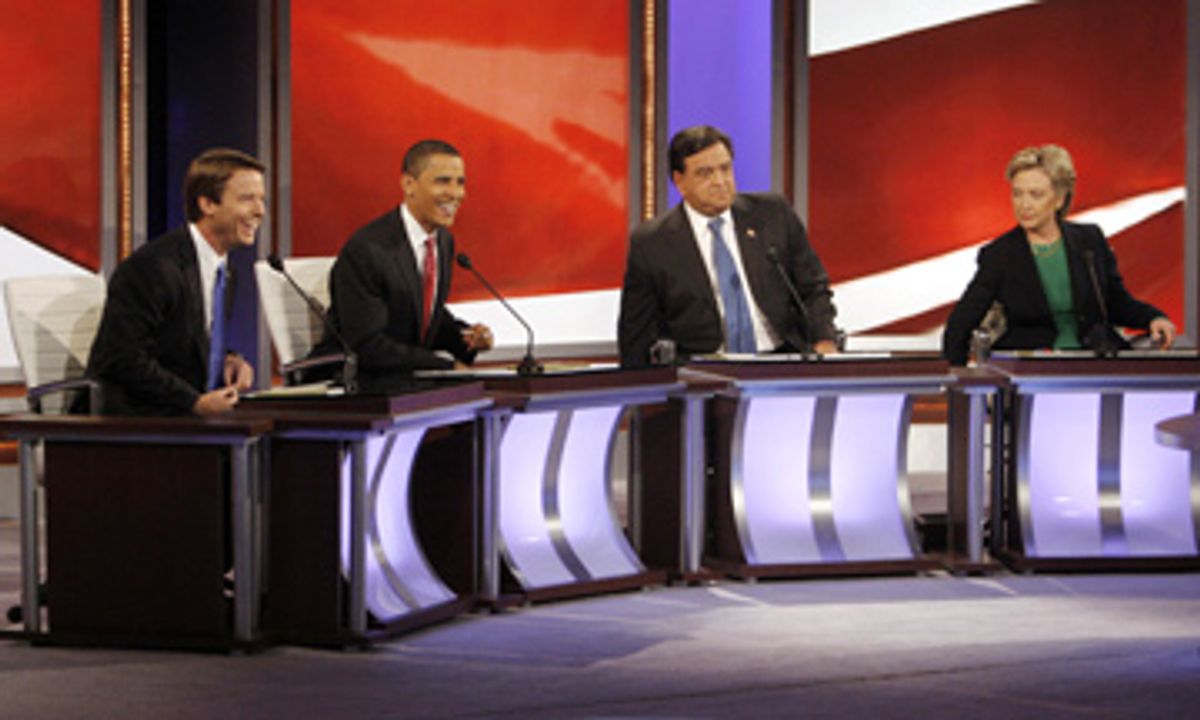 Bill Richardson -- who limped into New Hampshire after winning only 2 percent support in the Iowa caucuses -- finally had the debate moment that all underdog candidates crave. After listening to the tag team of front-runner Barack Obama and Iowa silver medalist John Edwards battle with the suddenly vulnerable Hillary Clinton, the almost-forgotten Richardson finally had a chance to utter his one-liner: "Well, I've been in hostage negotiations that are a lot more civil than this."

While featuring moments of intriguing drama, the final Democratic debate before the New Hampshire primary did not in itself change the contours of the race. (Truth-in-journalism disclosure: All verdicts rendered in a press room late at night always should be considered tentative). Clinton's critiques of Obama, which had been advertised in get-ready-for-this fashion by her campaign since her third-place finish in Iowa, turned out to be little more than a series of charges that the first-term Illinois senator had been (gasp!) a sometime flip-flopper. Since Saturday was Fight Night on ABC -- and the undercard GOP debate featured withering attacks on the zigzagging Mitt Romney -- Obama's sins of inconsistency seemed minor in comparison.

The highlight of the debate was an intense 10 minutes (with the only lightness provided by the Richardson hostage-negotiator crack) as the three leading candidates argued fiercely over...well...not that much really.

Clinton was the instigator as she challenged Obama over minor differences between his rhetoric as a 2004 Senate candidate and his actual voting record in Congress. She also launched into what may have appeared to most voters as an arcane argument over Obama's health-care plan and its lack of a "mandate" to require everyone to purchase coverage. In truth, Obama's proposal is less sweeping than the programs advanced by first Edwards and then Clinton. But these are small-bore differences -- and any Democrat elected in 2008 will rewrite the plan for universal coverage once in the White House.

What really was going on had nothing to do with health care. Clinton was trying to use the issue to suggest that Obama is really not the knight in shining armor that he seems, but instead is just another politician tacking with the winds. As she put it -- and the awkwardness of the phrasing undermined her argument -- "I think that what we're looking for is a president we can count on, that you know where that president is yesterday, today and tomorrow.

The emotional turning point in the debate came when Clinton rushed to fault Obama for having supposedly once said that Edwards was not electable. It is a rule in political debates that once your rivals begin defending you, it is a signal that you are irrelevant as a candidate. Joe Biden and Chris Dodd -- the Democrats voted off the island in the Iowa caucuses -- were constantly crowned with laurel leaves in prior debates because they were not a threat to anyone.

But Edwards was not to be patronized. Suddenly, in a tactical shift, the 2004 vice presidential nominee joined forces with his erstwhile rival Obama. "You know, Senator Obama and I have our differences," Edwards said before mischievously adding, "But both of us are powerful voices for change."

Whap! Two candidates for change and, by implication, one candidate for the status quo. Then Edwards turned the knife by harking back to Clinton-Obama dustup: "I didn't hear these kind of attacks from Sen. Clinton when she was ahead. Now that she's not, we hear them."

What seems obvious is that Edwards believes that he can slip past a potentially fading Clinton for second place in New Hampshire, which was once thought to be her firewall state. The initial post-Iowa-caucus polls in New Hampshire show Edwards running third, about 10 percentage points behind Obama and Clinton. But in state notorious for its well-informed but late-deciding voters, this is an unlikely, but not impossible, amount of ground to make up in the next two days.

Obama may have won the Saturday night debate simply by coming across as substantive and unruffled. There was almost a bemused tone in his voice as he flicked off Clinton's attacks. As in many debates, it is difficult afterwards to recall much that Obama said, but he consistently seemed in command while saying it.

There were points in the debate when Clinton's exasperation at her suddenly perilous position shone through. She gave what was, at essence, her life philosophy when she said with an edge in her voice, "Making change is not about what you believe. It's not about a speech you make. It's about working hard. There are 7,000 kids in New Hampshire who have health care because I helped create the Children's Health Insurance Program."

It took Obama a while to get a chance to respond to the words-versus-deeds issue, but when he did, he delivered his most eloquent speech of the evening. "There have been periods of time in our history where a president inspired the American people to do better," he argued. "And I think we're in one of those moments right now. I think the American people are hungry for something different and can be mobilized around big changes; not incremental changes, not small changes."

There is a temptation in covering politics to look at a debate in isolation, as if undecided voters will get all their direction from 90 minutes of back-and-forth banter. But what the final New Hampshire face-off did was to add a bit of color and shading to the picture that was already before the voters. In short: an entertaining evening, but not nearly as memorable as many expected.