Heartbreak ahead for Hillary Clinton?

Obama and Edwards are making potent emotional arguments to voters. But Clinton, still stuck in a cocoon of caution, could pay in New Hampshire. 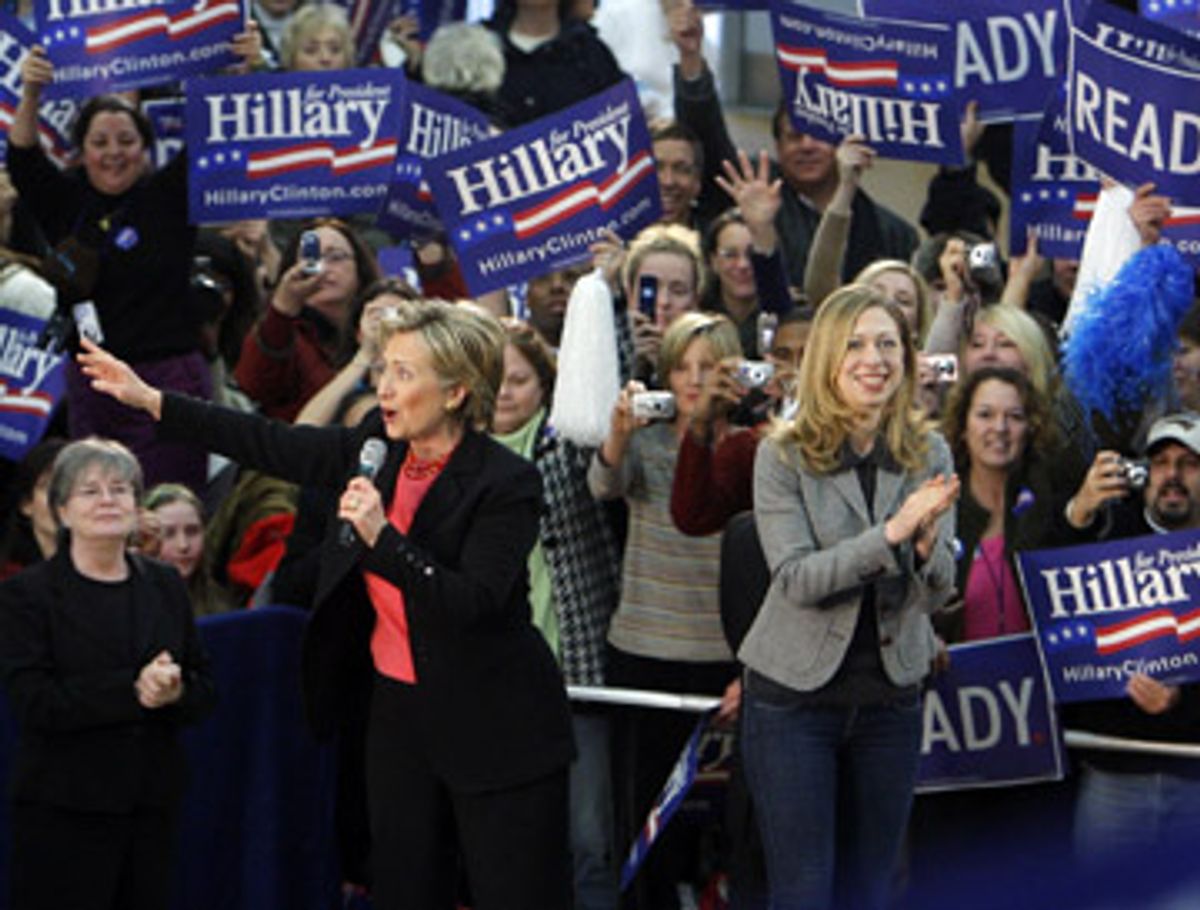 Only a child would have the guileless innocence to ask Hillary Clinton -- a candidate who had just lost the Iowa caucuses and is imperiled in New Hampshire -- to name what she likes the best about campaigning. "I like meeting people," the former first lady replied. "I like having a chance to look at people's faces and think about their lives and how they live."

While there is always a risk of a fatigued reporter (namely me) over-analyzing campaign blather, Clinton's answer seemed to contain an intriguing nugget of honesty. It hinted at a novelistic approach to politics as she tries to invent back stories to match the faces in the crowd. To my mind, Barack Obama, John Edwards and definitely Bill Clinton would look at voters and wonder, "How can I win them over?" Hillary Clinton is admitting to a more curious and intellectualized response to people: "Who are they really?"

The child's question about campaigning came near the end of a marathon town meeting here Sunday as the former first lady seemed determined to prove in a single afternoon that she can be as accessible as New Hampshire fan favorite John McCain. The implicit comparison here from nearly 90 minutes of answering voter questions -- and another 20 minutes devoted to a rare press conference -- was that it is Obama who is running an imperial campaign.

Maybe it was the nothing-left-to-lose liberation that comes with daunting poll numbers. Two New Hampshire surveys released Sunday (CNN/WMUR and USA Today/Gallup) both showed Obama with a double-digit lead over Clinton in Tuesday's primary. But Clinton seemed more relaxed and playful during the press conference than at almost any other time in the campaign. When a reporter asked obtusely whether there was any religious significance to a cross on her bracelet, she cracked, "Talk about the secular press." Then Chris Matthews, the host of MSNBC's "Hardball," posed a question on Iraq, which morphed into a plea for her to come on his show. Clinton's laughing response: "I never know what to do with men who are obsessed with me."

Asked about her "likability" during the press conference, Clinton responded by declaring, "I am passionate about the work that I've done my entire life. I would not be running for office -- I would not be doing everything I can to make my case to become the next president -- if I was not passionately committed to this country." Unlike Obama, who arouses passions, Clinton talks about her passion for the work of a president. Half the signs at the Hillary rally in Nashua had a single word, "Ready."

For Obama, the signage is about "change," but the rhetoric revolves around that richly emotional word "hope." At the vaudeville-era Palace Theater in Manchester Sunday morning, Obama spoke to an audience that had lined the streets for up to an hour hoping to snag a precious seat. "We can't find venues in New Hampshire big enough," said the candidate's state coordinator Matt Rodriguez. After Obama's triumph in Iowa, he had few doubters at the Palace when he declared, "In two days, you can do what the cynics said could not be done ... We will have a chance to come together -- Democrats, Republicans, independents -- and announce that we are one nation and one people. It is time for change in America. This is our moment and our time."

Obama's usual campaign gambit of asking anyone undecided in the room to raise their hands fell flat in Manchester. Only about 20 voters on the ground floor at the Palace signaled that they were still shopping for a candidate; the others were basking in their choice for president. At 10 a.m. on Sunday -- church time -- Obama was preaching to the choir.

Regardless of one's views of Obama as a potential president, it is hard not to be awed by the outpouring of emotional feeling that is being projected onto him. Whatever happens to his candidacy from here (and make no mistake, the Democratic race is far from over even if Obama sweeps Tuesday's primary), the first days of 2008 have created another political legend in the fabled snows of New Hampshire.

Obama is not the only Democrat who is harnessing the power of emotion. At a packed noontime town hall meeting Sunday in Manchester (in a smaller room than Obama's), John Edwards defiantly promised, "I'm in this race through the convention and on to the White House." But the emotion on display at the Franco American Center did not come so much from Edwards' fiery rhetoric as it did from the fight-back-the-tears gallantry of the family of Nataline Sarkisyan, the 17-year-old from Los Angeles who died in December because her insurance company delayed giving approval for a liver transplant. After Edwards retold her story in his caucus-night speech, the Sarkisyan family got in touch with the campaign and volunteered to help.

There are many mawkish and manipulative moments in politics -- and then there are those occasional times when real life just breaks your heart. That was how I felt when Krikor Sarkisyan, the girl's father, said gravely in Armenian-accented English, "For Nataline, I promise her that when she got well, after recovering, I wanted to buy her a ... white car. You guys know what I got for her after she passed away? I bought a coffin for her."

The Democratic race has not been a clash of ideas, since all the major candidates agree on broad themes, from sweeping national healthcare coverage to prudently withdrawing from Iraq. That frees up voters to make their choices based on grounds other than coldblooded logic and what's-in-it-for-me green-eyeshade arithmetic.

Barack Obama and John Edwards in different ways understand the potency of emotional argument. But Hillary Clinton, who is struggling to break out of the cocoon of caution that has clung to her, has yet to master the non-rational side of politics. And so far in this campaign season -- to Clinton's detriment -- heart triumphs over head.