Organic cotton is a leap ahead for the garment industry -- not so the toxic dyes and finishing agents used in trendy eco-jeans. 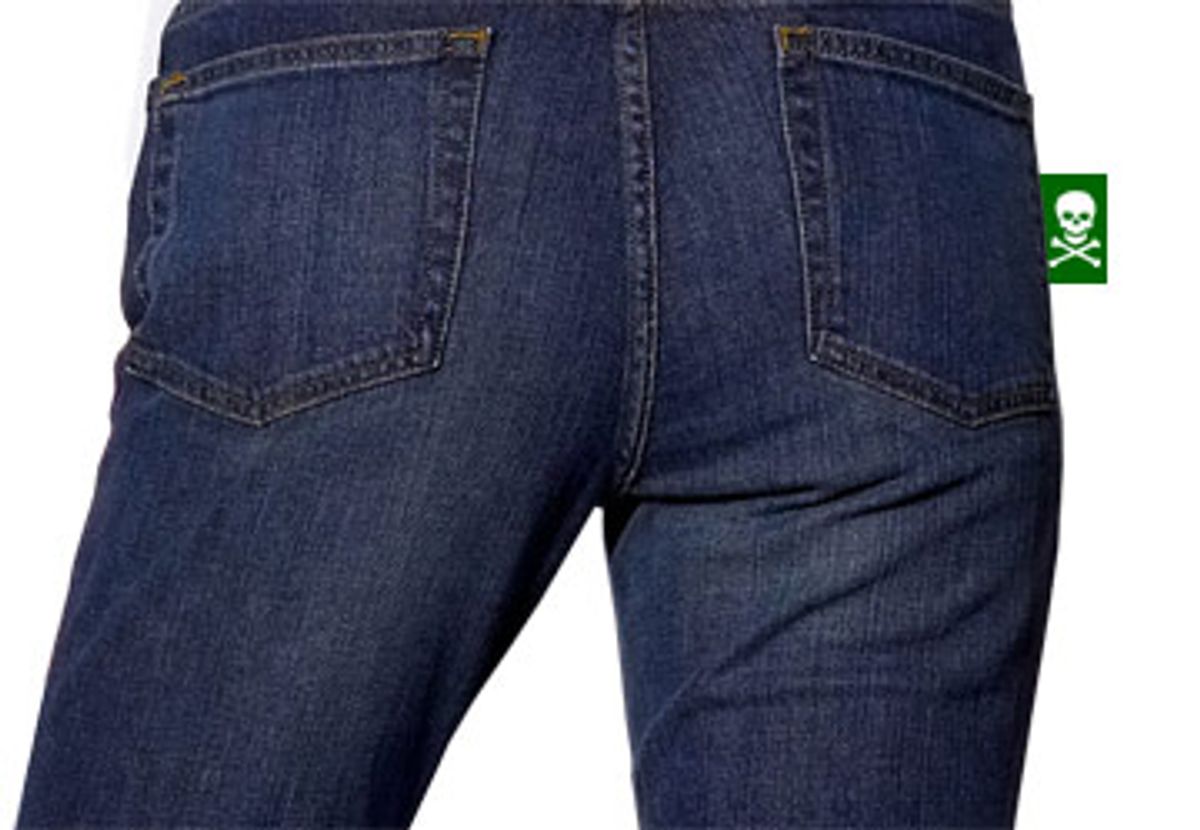 More than any other article of clothing, bluejeans connect us to the storied myth of America. Created for ranchers and loggers in the 19th century, bluejeans still symbolize hard work and freedom, even if we don't wear them for anything that resembles physical labor. Popularized by icons like James Dean and Bruce Springsteen, jean styles, from bell-bottomed to acid-washed, reflect the zeitgeist of our times. Today, there's a new jean in town -- organic.

Just over a year ago, Levi Strauss & Co., the top jeans retailer in America, launched Eco jeans, made with 100 percent organic cotton, in a variety of styles. Jeans in the company's Red Tab line sell for $68 (only about $20 more than typical Red Tabs), aiming to fulfill a mission to "democratize organic," according to E.J. Bernacki of Levi's. Gap is considering its own line of organic jeans, and Patagonia and a number of high-end fashionista brands, such as James Jeans, Del Forte and Seven, also make jeans from organic cotton. Levi's, for its part, explains that the move to organic was a simple response to consumer demand. Retail sales of organic cotton increased 238 percent between 2005 and 2007, and sales are expected to reach more than $2 billion by the end of this year, according to Organic Exchange, a nonprofit trade association.

While certified organic cotton makes up only an estimated 1 percent of the total cotton grown worldwide, the demand for organic cotton is so great that suppliers report escalating prices across the world. Grown primarily in Turkey and India, organic cotton must adhere to the same USDA standards as organic fruits and vegetables. It must be produced without synthetic pesticides on fields that have been managed organically for at least three years and certified by an accredited third-party certifier.

The drive toward organic jeans and other organic clothes is good news for dyed-in-the-wool greens. The U.S. Environmental Protection Agency classifies eight of the pesticides used in nonorganic U.S. cotton as possible carcinogens. While cotton represents only a fraction of all crops in production, it uses 25 percent of the world's insecticides, according to nonprofit Pesticide Action Network North America. In California alone, nearly 6 million pounds of pesticides were sprayed on cotton fields in 2005. In India, 91 percent of men who work in cotton fields get sick, reports Stephen Yafa, author of "Big Cotton," a comprehensive look at the plant.

However, organic bluejeans aren't exactly saving the planet one pant leg at a time. Organic textiles aren't like organic apples; they don't roll off the farm ready to wear. There are no laws that regulate how a garment made from organic fiber must be processed -- that is, dyed, washed and sewed. The Fair Trade Commission regulates textiles but has no specific laws for organic labeling; manufacturers are expected to make truthful claims. But "truthful" can lead to some surprising omissions.

The USDA sprays all raw fiber (which hasn't been spun into yarn or fabric) brought into the U.S. with fumigants such as methyl bromide and aluminum phosphide to ensure that foreign bugs don't sneak into the country. Such chemically laden cotton could be sold as "organically grown cotton," according to Terry Young at Organic Exchange, since it technically was grown without pesticides. Another misleading aspect of the lack of product standards is that a garment labeled "made with organic cotton" could contain minuscule amounts, say 3 percent, of organic cotton.

On average, nearly a pound of chemicals goes into every pair of jeans, according to Yafa. Regular denim is dyed with petroleum-based dyes that don't easily break down in wastewater-treatment facilities. To finish jeans, making them look worn and soft, as if they've been worn by people who work in mines or ride motorcycles, requires a number of toxic bleaches. And rinsing these "finishers" from the garment uses on average 10.5 gallons of water per garment, says Tony Rodriguez, owner of Blue River Denim Laundry, a finishing house based in Los Angeles that works with Levi's and Banana Republic. Most troubling, says Rodriquez, are the gluelike resins used to seal color in place. Because these products contain formaldehyde, the Occupational Health and Safety Administration regulates them as carcinogens. Jeans marketed as eco and organic might use any of these processes.

Recently, the textile industry has developed a number of voluntary standards to ensure a green manufacturing footprint. Launched in late 2006, the Global Organic Textile Standard has emerged as what industry experts call the most comprehensive certification. GOTS requires companies to create safe working conditions for workers, restricts the amount of heavy-metal dyes and bleaches allowed in production, expects companies to meet certain water- and air-quality standards for factory emissions and tests final products for toxic residues. So far, however, there's no label to identify the standard or a Web site to list companies that adopt it.

According to major certifiers, no American jeans company employs a voluntary organic manufacturing standard for all aspects of production, although some report that they are "environmentally sensitive." For its fancy Capital E 501 jeans, which retail for around $250, Levi's insists it uses nonpetroleum, plant-based dye and few or no finishing agents. Patagonia claims that it uses minimal finishers in its organic cotton jeans. Del Forte reports that it reduces the use of chemicals by hand-sanding its denim for that weathered look.

For now, until textile processing gets an organic certification standard, those concerned with their environmental impact should buy darker jeans, which generally are made with many fewer chemicals. Just one more reason to stay far, far away from those unattractive acid-washed jeans.