GOP to voters: Be afraid, be very afraid

The Republican presidential contenders are engaged in a televised scaring contest, complete with explosions and sound effects, on the issue of national security. Check under your bed. 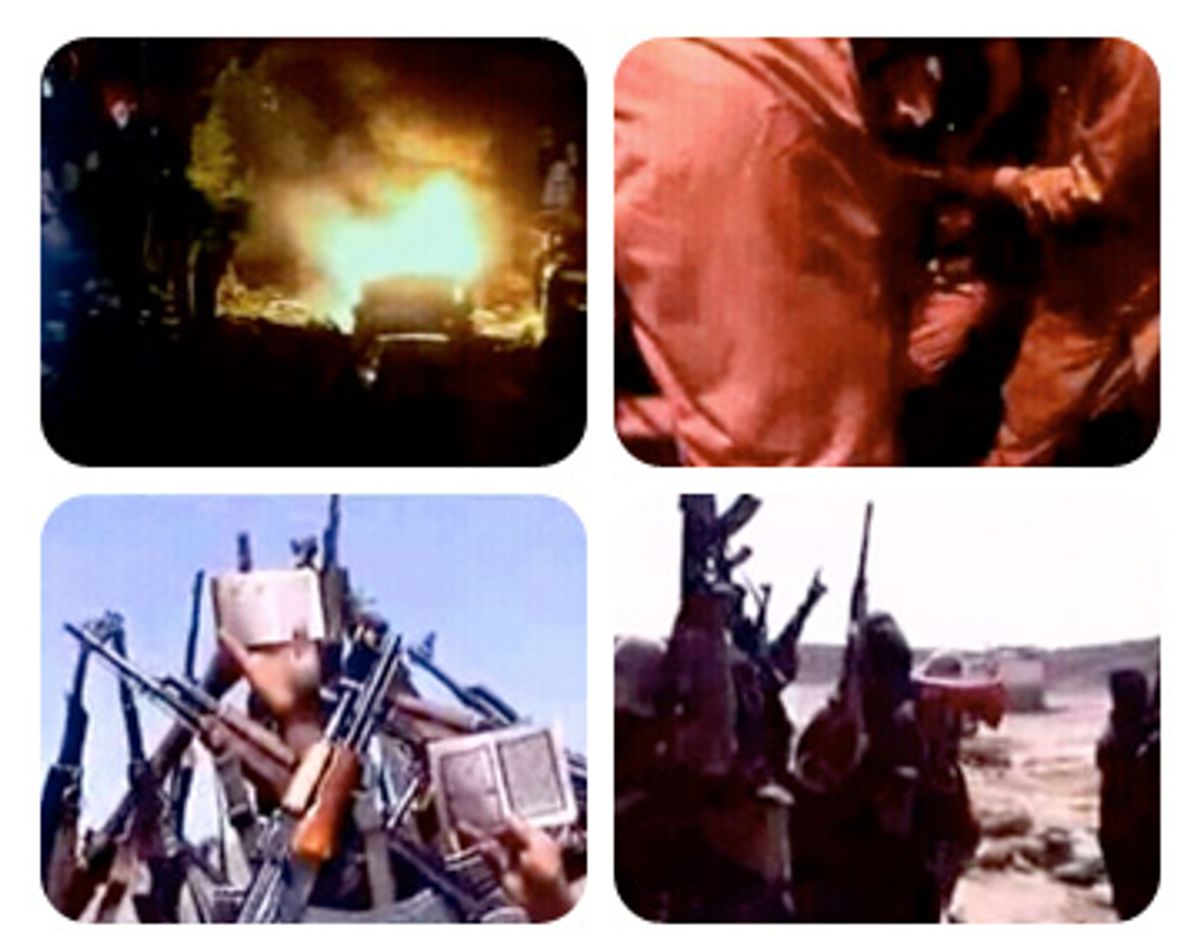 First, an enormous orange fireball booms onto the screen. The camera shakes and a crowd runs for cover. Next, sirens wail, as an abandoned car explodes. Paramedics tote bodies away from another blast. Militants raise their AK-47s and parade across the desert, their faces masked.

What's the next image that fills the screen, in a Web commercial by John McCain that really puts the "attack" in "attack ad"? Mitt Romney's face, above a quote from a Hannity & Colmes appearance where Romney said "a president is not a foreign policy expert."

The closer the New Hampshire primary gets, it seems, the more terrified the Republican presidential candidates want you to be. That way, you'll vote for the guy who scared you the worst, and not that guy who's going to preside over your death at the hands of jihadists. McCain, who wants to shift the conversation away from immigration and onto foreign policy and security issues, has Web ads like "Experience." Rudy Giuliani -- who never misses a chance to remind voters about 9/11 -- is airing a TV commercial in New Hampshire called "Ready" that is even more alarming than McCain's "Experience." Released just days after Bhutto's murder, it features footage of the late Pakistani leader, accompanied by a soundtrack of Middle Eastern music. "Hate without boundaries," intones a narrator. "A people perverted ... A nuclear power in chaos." Mike Huckabee -- no foreign policy maven -- answered a press conference question about immigration by invoking the specter of Pakistanis with "shoulder-fired missiles" sneaking across the U.S.-Mexico border. Fred Thompson got into the act at Saturday night's ABC News/Facebook/WMUR debate, proving that even campaigns that don't have the money to scare people with ads can still try other methods. "We could be attacked with a biological weapon and not even know it for a long period of time," Thompson told viewers matter-of-factly. (Now enjoy your late local news.)

Scaring people isn't a new campaign tactic, exactly, nor has it ever been limited to Republicans. Think of Lyndon Johnson's famous 1964 ad, "Daisy," which showed a little girl happily counting petals on a daisy until she got nuked, presumably because Barry Goldwater started a war with the Soviets. President Bush certainly used fear in his 2004 reelection bid. Bush's "Wolves" commercial, by the same ad team now working for McCain, strongly implied that a President Kerry would allow your children to be eaten alive.

But contrast the current Republican menu of ads with the commercials their Democratic counterparts are running -- which focus more on healthcare costs or outsourcing (or, simply, corporate greed, in John Edwards' case) as the dominant threats to our way of life -- and the terrifying tenor of the GOP messages stand out. And the themes running through the Republican campaign now signal what any GOP nominee is likely to use against a Democrat in the fall.

Ask Republicans about the issue, of course, and they'll say the only danger in advertisements that focus on terrorist attacks is that they won't go far enough. "Whether we live or die is obviously the most important issue," said Rep. Peter King, R-N.Y., an advisor to Giuliani's campaign and the top Republican on the House Homeland Security Committee. "The greater risk is to ignore reality."

Giuliani's package of rhetoric tilts even more toward terror than anyone else's, in part because so much of his credibility as a national political candidate is built on his response to the 9/11 attacks, but in part because he really seems unable to help himself. At Saturday night's debate, he began listing terrorist attacks by radical Muslims dating back to the 1960s, trying to hector Ron Paul into recanting his heretical insistence that U.S. foreign policy is to blame for recent attacks. "They have also killed people recently in Bali, in London. They have launched attacks in Germany," Giuliani said. "Where did the attack on the Munich Olympics take place: in the United States, or did it take place in Germany? I could go on and on."

McCain's team, which wants to highlight his long record on defense issues and paint Romney as too inexperienced to trust now, also likes to remind voters that the world is a dangerous place. But they acknowledge the significant political upside in making that case. "We've always believed there's a high likelihood that this election -- this primary, but also the general election -- will be seen through a national security frame," Mark McKinnon, his media advisor, told Salon. "And if the frame is national security, the answer is John McCain." McCain aides think Bhutto's assassination helped refocus voters on national security, and that part of his recent surge in New Hampshire polls reflects their effort to move the campaign where they want it (though since they can't afford their own polling, they don't really know). "We're playing to our strong points," said McCain advisor Charlie Black.

Romney is doing the same thing, of course -- his New Hampshire ads hit McCain for supporting immigration reform ("even voted to allow illegals to collect Social Security," in Romney's words) and opposing some of Bush's tax cuts, territory where Romney's advisors think McCain will be vulnerable here. After the "Experience" Web ad appeared, Romney aides stepped up their campaign to persuade voters that McCain lashes out at fellow Republicans just for the fun of it. "Choosing to ignore substance and relevant issues, the McCain way has always been to attack opponents in a personal manner," said Romney spokesman Kevin Madden.

The difference is, unless you're the Club for Growth, an ad that brings up McCain's votes against repealing the estate tax just doesn't have the same visceral pull as one that opens with explosions, segues to corpses and ends with revolutionaries. And among Republican voters, at least, the tactic seems to be working. Giuliani's relentless focus on terrorism has convinced at least some of the GOP base that he would be the best commander in chief. They seem to think serving as mayor of New York was similar to serving in the military. "It's like a war going on in New York City," said Karen Gallagher, of Nashua, who works in publishing and may vote for Giuliani. "I am scared to death if the Democrats get in." Her friend Valerie Richards endorsed Giuliani's Bush-style emphasis on preemption. "It's detrimental if you're reactive" to terrorist attacks, Valerie Richards told me. Giuliani makes quite clear he wouldn't wait to be hit before striking back.

If McCain beats Romney in New Hampshire, expect more of the same from McCain. In politics, it's hard to argue with success. (Expect more of the same from Giuliani whether he comes in first or last.) All year, even when his campaign was flailing, McCain stuck to his guns on terrorism and the war in Iraq, and there's no reason he'd back off of the topic now that he's in position to become the front-runner. But based on what we've seen so far, that could mean a bleak landscape of bombs and blasts on television throughout January as McCain and Giuliani try to outdo each other. It won't make for an uplifting campaign, but given the various deviations from Republican orthodoxy among Huckabee, Giuliani and McCain, terrorism may be the only issue they can use to appeal to the entire GOP base.