With Mitt Romney on a downward slide, McCain and Mike Huckabee are now probably the two most likely GOP nominees. 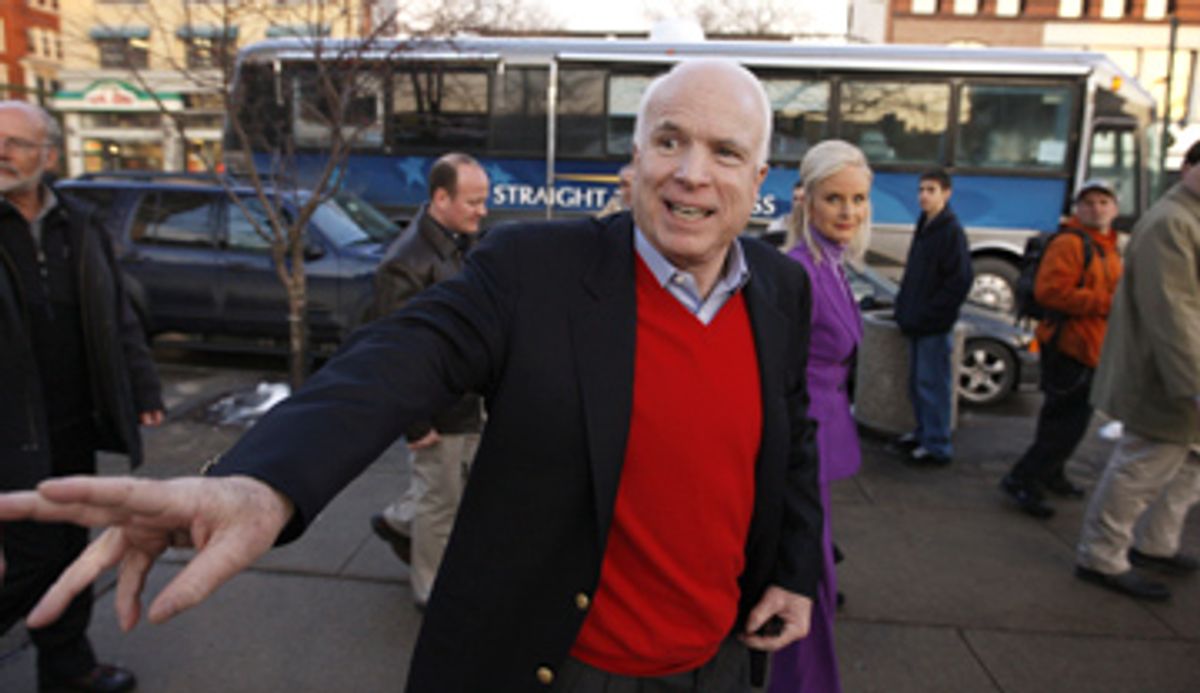 The eve of another New Hampshire primary was rich in nostalgia and probably pregnant with might-have-beens for John McCain. The Arizona senator who defeated George W. Bush by 20 percentage points here in 2000 confessed that he and his staff had looked up the pre-primary polls from eight years ago.

"Most of the polling had us about 3 points up and a major poll had us 4 points down," McCain said as he chatted with a half-dozen reporters at the back of hi campaign bus Monday. "It wasn't until the last 24 hours when things broke for me."

An alternate history of the 21st century could be built around that conceit of what if McCain had ridden the momentum from New Hampshire to victory in the South Carolina primary and on to win the 2000 GOP nomination. Either Al Gore would have been inaugurated president in 2001 or -- instead of Bush -- a more competent, if equally hawkish, Republican named McCain would have been in the White House on Sept. 11.

But fate may grant McCain a do-over. With the free-spending Mitt Romney getting more clang than bang for the buck, McCain and Mike Huckabee right now are probably the two most likely GOP nominees. An average of the last five New Hampshire polls showed McCain with a 35-to-28 percent lead over Romney, a former Massachusetts governor. But reflecting his own hard-won knowledge of the vagaries of New Hampshire voters, McCain said, "I'm confident, but there are a lot of undecideds who make up their minds when they get into the ballot booth."

McCain, to his credit, is almost certainly the most accessible major politician in America. As he did in the 2000 primaries, McCain turns his bus trips into an almost continuous loop of on-the-record press conferences. Instead of 25 journalists being crammed into a tiny space (I have a 2000 memory of a petite South Carolina reporter, tape recorder in hand, perched in the overhead luggage compartment), this time around groups of reporters are rotated onto the main McCain bus in shifts.

These audiences with McCain are part policy (he will eagerly talk about the North Korean nuclear program), part political (on abortion: "It's funny that the issue hasn't come up in this campaign like 2000") and part pure punch lines about his staff ("They threatened to join the Ron Paul campaign if I didn't stop telling the same stale jokes over and over"). Even when McCain is bone tired, as all candidates are right now, he is garrulous in a way that suggests that he is still trying to make up for his long months in solitary confinement.

Watching McCain, dressed in a blue blazer, red sweater and open-neck shirt, make the final campaign rounds, I wondered about the road not taken eight years ago. There is a coiled intensity to McCain in his eighth decade as he seems powered by something beyond pure ambition. Talking to 150 voters Monday morning on the town green in Keene, McCain said -- and I believe him -- "I don't want to be president to ride around in a helicopter."

So on the McCain bus, on the drive from Keene to Hanover, I asked the once-and-current candidate how things would have been different if he had been elected in 2000. There was, of course, a mischievous aspect to the question, since I wondered how McCain would deal with a world in which a second Bush presidency would never have happened.

More guarded now than he was eight years ago, McCain did not take the bait. "Domestically," he said, "I would have cut spending. Instead we went on a spending spree." A true but not aggressively anti-Bush answer, since responsibility for the sea of red ink was shared by the Republican Congress. When he turned to national security, McCain, an ardent supporter of the "surge" and Gen. David Petraeus, limited himself to saying, "Certainly in Iraq, we'd be in a different place [if I were president]. I knew what needed to be done."

Returning to the McCain bus (I traveled with him in New Hampshire, South Carolina and Michigan last time around) brought with it a wistful sense that you can't go home again. Maybe it is the times and McCain's unyielding commitment to the war in Iraq. (As he said on the bus: "If we did what the Democrats wanted to do six months ago, al-Qaida would have taken over in Iraq.") Maybe it is the sense that McCain's unique style has turned into a shtick.

Or maybe it is the simple reality that 2000 was McCain's year. Instead the Republicans and the nation opted for Bush -- and it made all the difference.