The polemical sequel to "The Omnivore's Dilemma," Pollan's new book shows how processed foods are making us fat and sick -- and why eaters must revolt. 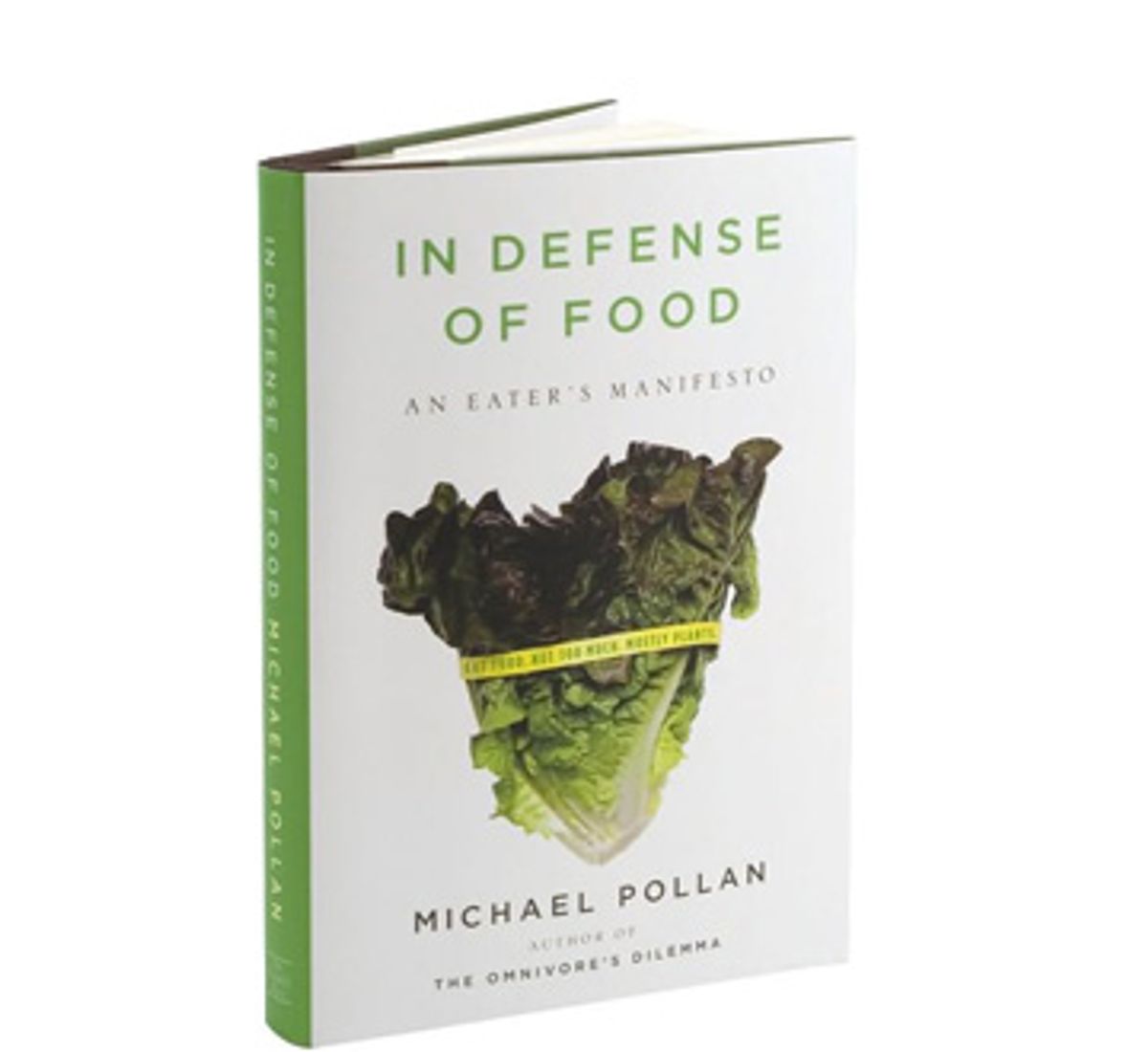 When Michael Pollan writes about food scientists, he makes them sound like the crackpots Jonathan Swift dreamed up for "Gulliver's Travels," who are busily working at the Grand Academy of Lagado on such doubtful enterprises as "a project for extracting sunbeams out of cucumbers" and "an operation to reduce human excrement to its original food." Pollan's researchers -- the men and women who have given scientific support to the health claims of processed-food manufacturers -- are no less wacky. In fact, Pollan sees them less as scientists than as votaries of a movement he calls nutritionism: "As the '-ism' suggests, it is not a scientific subject but an ideology."

Pollan has probably had as much as anyone to do with making "locavore" (meaning someone who eats locally raised food) the New Oxford American Dictionary's word of the year, and with spreading the word in a more figurative sense. He's addressed such issues as the insanities of industrial farming, the ethics of meat eating and the perils of genetic engineering in a series of wonderfully readable reports for the New York Times Magazine, in his 2001 book "The Botany of Desire" and -- triumphantly -- last year in "The Omnivore's Dilemma," his masterly fusion of reportage and reflection on our culture's growing alienation from the food we eat.

Now he seeks to heal our sickness. (It has a name, too: orthorexia, the affliction of "people with an unhealthy obsession with healthy eating.") His new book, "In Defense of Food," addresses the many readers who, he tells us, finished "The Omnivore's Dilemma" hungering for more: "Okay," they wanted to know, "but what should I eat?"

There's something pathetic in that very American question, because the answer is already implicit in "The Omnivore's Dilemma," and it should have been apparent even before readers discovered Pollan's scintillating book -- except, clearly, it wasn't. But then America is a gullible nation with a long-standing thirst for snake oil. How could we have resisted the blandishments of marketing departments and their lab-coated allies? We couldn't, and as a result, Pollan writes, "Thirty years of nutritional advice have left us fatter, sicker, and more poorly nourished."


As I write, the FDA has just signed off on a new health claim for Frito-Lay chips on the grounds that eating chips fried in polyunsaturated fats can help you reduce your consumption of saturated fats, thereby conferring blessings on your cardiovascular system. So can a notorious junk food pass through the needle eye of nutritionist logic and come out the other side looking like a health food.

The smart thing to do, he thinks, is stay away from any food that trumpets its nutritional virtues, since "for a food product to make health claims on its package it must first have a package, so right off the bat it's more likely to be a processed than a whole food." Meanwhile, "the genuinely heart-healthy whole foods in the produce section, lacking the financial and political clout of the packaged goods a few aisles over, are mute." (I'm sorry to have to add that he describes this situation as "the silence of the yams.")

Subtitled "An Eater's Manifesto," "In Defense of Food" is a polemical pendant to "The Omnivore's Dilemma," whose meditativeness it rejiggers into something more practical: rules for healthy eating. It's more than just rules, of course. The book covers the historical and scientific background of our current predicament in order to show how we got here. Pollan's conclusions are no different from his earlier ones, but his tone has grown more assertive. In "The Omnivore's Dilemma" he sought to reclaim our lost relationship to our food by taking us to its sources (some of which, like factory farms, we'd rather not think about -- and, of course, corporate offices don't want us to think about). The new book is less concerned with the philosophical consequences of our alienation than the bodily ones.

Take refined flour -- which, like everybody else, I've been hearing since my hippie days is bad for you. Pollan lays out the reasons. Wheat was once ground between stone wheels, which successfully removed the bran from the kernel but couldn't get rid of the germ, or embryo. The resulting yellowish-gray flour was rich in all kinds of nutrients; the downside was that it soon went rancid. The introduction of metal and porcelain rollers circa 1870 allowed millers to finally eliminate the germ and grind the grains down to the snowy powder we know today, extending their shelf life -- "precisely because they are less nutritious to the pests that compete with us for their calories." But not only is the resulting product nutritionally all but worthless; the removal of fiber and the finer milling also hasten the body's conversion of the starch into sugar, making it "the first fast food."

Starting as far back as the 19th century but with mounting ardor in the 1980s, food scientists shifted the emphasis of their research to nutrients, the chemical compounds in food that affect our health. "Eat more of the right ones, fewer of the wrong, and you would live longer, avoid chronic diseases, and lose weight," they preached -- only the opposite is what happened. "The plain fact," Pollan charges, is that "the chronic diseases that now kill most of us can be traced directly to the industrialization of our food."

But the new emphasis on nutrients was a gift to the processed-food industry, which could inject the nutrient of the moment into carpet lint, if it so chose, and slap on a health claim. It turns out, though, that you can't match the nutrition in a peach, say, by eating its equivalent in nutrients.

Why not? For starters, scientists still don't know enough about the peach: They've unmasked its main nutrients, but undiscovered micronutrients may either be making their own contributions or allowing the macronutrients to furnish theirs. In addition, it's possible that a peach may be more than the sum of its nutrients, whose interrelationships are still too complex for science to decipher. And anyway, who needs an imitation peach? The real thing is more delicious than any replacement a lab could come up with.

Which is exactly Pollan's point: Before the dubious refinements of food science, the way we ate was already fine. Traditional diets, whether in Italy, India or the Australian outback, carry practical wisdom accumulated over many generations, and they're uniformly healthier than the supermarket gunk most Americans ingest.

Then why have we abandoned those traditions? Because advertisers urged us to, and we swallowed their counsel. In a consumer society, business needs a constant flow of new products to market (an easier task, no doubt, in a country crowded with immigrant populations eager to assimilate). In "The Omnivore's Dilemma," Pollan noted in passing that a foible of capitalism is "the tendency over time for the economic impulse to erode the moral underpinnings of society." "In Defense of Food" is an extended gloss on that remark. What could be more immoral than a food industry that sells us food that harms us?

Given his moral high ground and his unfailing good sense, I wish I could say that Pollan had produced another great book. But even though it's forcefully -- and concisely -- written, "In Defense of Food" covers little new territory and doesn't really leave you eager for more. "The Omnivore's Dilemma" has fascinating people (farmers, foragers) and places (farms, forests, abattoirs). To report the new book Pollan plowed through a load of the scientific literature and talked to authorities: praiseworthy but not nearly as enthralling. And unlike its predecessor, "In Defense of Food" isn't a meditation. It seeks to answer questions, not to raise them.

Still, it's a book that could make a difference. We know that it's possible to alter a culinary culture. No one eating in London in the 1970s could have believed that by the beginning of the 21st century it would be a great food city. A similar revolution took place across the United States -- granted, a revolution in gastronomy, not nutrition (which, as Pollan documents, was simultaneously headed south). Yet the very success of the processed-food industry in putting over its bogus health claims shows, at least, how many people care about these issues.

My friend the low-fat freak is one of them. "What the Soviet Union was to the ideology of Marxism," Pollan writes, "the Low-Fat Campaign is to the ideology of nutritionism -- its supreme test and, as now is coming clear, its most abject failure." Recent research shows the decades-long effort to get us to use trans fat (as in hydrogenated vegetable oil) in place of animal fat to have been -- putting it mildly -- misguided. In Pollan's words, "The principal contribution of thirty years of official nutritional advice has been to replace a possibly mildly unhealthy fat in our diets with a demonstrably lethal one."

My friend, a stay-at-home spouse who tended her family with the devoted ferocity of a mama grizzly, would cook with anything that had "low fat" on the label. There was good reason for her heart-healthy mania: Two of her uncles had died young after heart attacks. Now her husband has diverticulitis (a condition unknown in populations that exist on whole foods, Pollan reports) and her grown son suffers from Crohn's disease. And I can't help wondering whether their intestinal maladies don't have something to do with all the processed glop she fed them, in good faith, back in the '80s.

Not to worry -- medicine has their conditions under control. As Pollan points out, the food industry's blunders have been a blessing to the healthcare industry: "Doctors have gotten really good at keeping people with heart disease alive, and now they're hard at work on obesity and diabetes. Much more so than the human body, capitalism is marvelously adaptive."

America, America! The malfeasance of our food providers is just one more iteration of the warped culture we live in. I doubt that the worthy list of common-sense recommendations Pollan closes with ("Don't eat anything your great-grandmother wouldn't recognize as food"; "Eat slowly") will stand up to the American way of life. For as he acknowledges, "Fast food is precisely the way you'd expect a people to eat who put success at the center of life, who work long hours (with two careers per household), get only a couple of weeks vacation each year, and who can't depend on a social safety net to cushion them from life's blows."

The food industry, after all, answers to the financial industry, which is notoriously deaf to all but one tune. And when the bottom line is the only thing that counts, it doesn't matter whether the canned soups or the cars or the widgets your company makes are any good. It only matters that your marketers can talk people into shelling out for them.