The roots of Kenya's upheaval

It's not just tribal hatred that's spurring bloodshed in this stratified African nation. 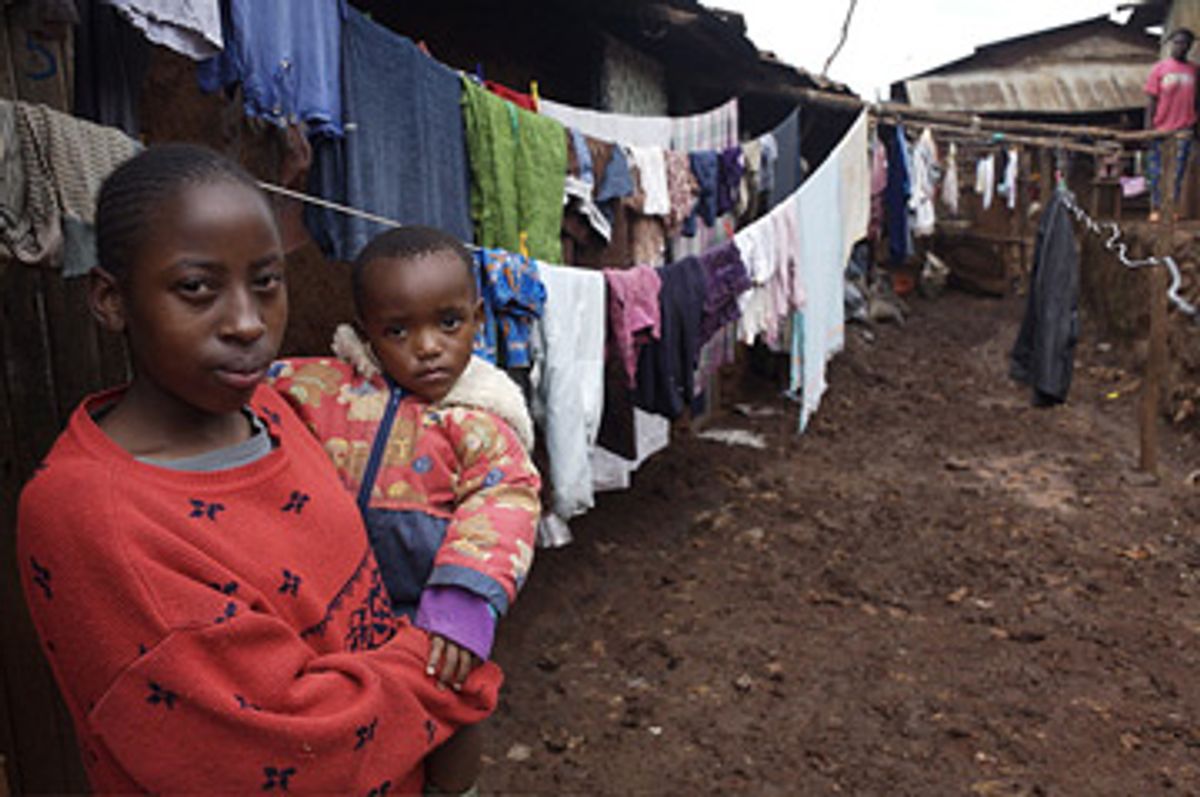 When Kenya erupted in post-election violence earlier this month, one of the flashpoints was in Kibera, Nairobi's notorious slum. Kibera is home to a million people, wedged tightly together in a sea of tin-roofed shanties. The neighborhood achieved star status in the film "The Constant Gardener," the fictional story of Western pharmaceutical greed gone awry. It also has played prominently in Kenyan national politics of late, as it is a stronghold for opposition leader Raila Odinga. Odinga claims that President Mwai Kibaki rigged the Dec. 27 elections in order to stay in power. When the dubious election results were announced naming Kibaki the winner, Odinga's supporters, including many in Kibera, took to the streets in violent protest and whole sections of the neighborhood were burned to the ground.

I visited Kibera in the fall with documentary photographer Karen Ande, and we spent nearly a week interviewing and photographing families and children affected by HIV/AIDS. We hiked through the grit of this uneasy neighborhood, where the roots of the recent violence are readily apparent. For while long-standing tribal enmity is key to the latest conflicts, economics has also played an important role, especially in an area as profoundly deprived as Kibera.

The largest slum in the world, Kibera is a maze of back alleyways scored by rivulets of stinking garbage, where ragtag children play and residents hang out their newly laundered clothes to dry. There is no public sanitation, and electrical service is spotty at best; during our recent visit we learned that the electric company had cut off service because too many people were illegally tapping into the wires.

There are few jobs to be had, so unemployment is staggeringly high. Every morning there is a mass exodus from the neighborhood, as a stream of hopeful workers follow the rail lines into the city in search of work. If you ask people what they do for a living, often they will tell you they are casual laborers, meaning they go out looking for work on a construction project, for a house to clean or a bit of laundry to wash for the equivalent of a few cents -- but often they come home empty-handed.

There is a thriving, informal economy in Kibera, including myriad makeshift stalls that line the dirt boulevards and side streets where one can purchase pirated DVDs, knockoff watches and sneakers, and secondhand clothing shipped in from abroad. Many women also make a living buying foodstuffs -- bananas, kale, cabbage and corn -- and reselling them at a small profit to earn a bit of income with which to feed their families.

The first time we visited Kibera in 2004 we were with a group called the Kibera Community Self-Help Program, the oldest and largest community-based program in the neighborhood. Patricia Muli, our guide from the group, told us she had once hosted a visitor from Malawi -- one of the poorest countries in Africa -- and that the woman had simply cried after seeing Kibera and its grim, acute poverty.

On our most recent trip, we spent several days with John Adoli, a former soccer player and the founder of a small grass-roots program known as Kibera Hamlets. The program aims to empower youngsters through outreach programs and to educate them about good health practices, including ways to avoid HIV and pregnancy. Adoli took us to the home of 13-year-old Yvonne Amale, one of the many youngsters in Kibera who have lost their parents to AIDS. The AIDS pandemic in Africa has contributed to the breakdown of families and made it increasingly difficult for people living on the margins to survive. In Kibera, the incidence of HIV among adults remains relatively high -- 11.3 percent -- compared to the country's estimated national rate of 6.7 percent, according to Kenya's National AIDS Control Council.

Yvonne lived in a typical Kibera shanty, a house of mud and sticks barely large enough for a table and a bed. A pile of rusted tin and rotting wood stood nearby, once the makings of a home, and the stench of garbage was palpable. Yvonne was only 11 years old when her parents passed on, and her sister, Tina, was an infant. I tried mightily to coax a smile out of little Tina, 1-and-a-half years old, but with no luck; she disappeared behind a screen to munch privately on some cashews and a protein bar I gave her. Yvonne had dropped out of school for a year to nurse her parents until their death, and was now struggling to keep up with the demands of the eighth grade while trying to keep her little family alive. Adoli had worked with the landlord to help ensure that she and Tina had a place to lay their heads at night.

In addition to practical help, Adoli's organization has a support group for Yvonne and other girls like her, who could easily slide into a life of prostitution. "If there is no one who stands for these girls, then they are finished," he said. "If they don't get good guidance, they end up on the streets because no one can provide for them."

It's far too easy to end up on the streets of rough-and-tumble Kibera, where life is routinely lived on the edge. In the months leading up to the election, Odinga tapped into the widespread sense of disenfranchisement, as many residents feel they have been left on the sidelines while Kenya enjoys increased economic prosperity. Kibera is home to many who migrated from their rural, agrarian communities seeking to benefit from this new economic growth. But instead they have found themselves trapped in disillusionment in the slums. It's no wonder Kibera has finally exploded.

Ruthann Richter has written extensively on the AIDS pandemic in Africa. She is currently Director of Media Relations at Stanford University School of Medicine.