The Clinton-Obama contest gets rougher

Will the battle for the Democratic nomination turn into a debate about race and gender? 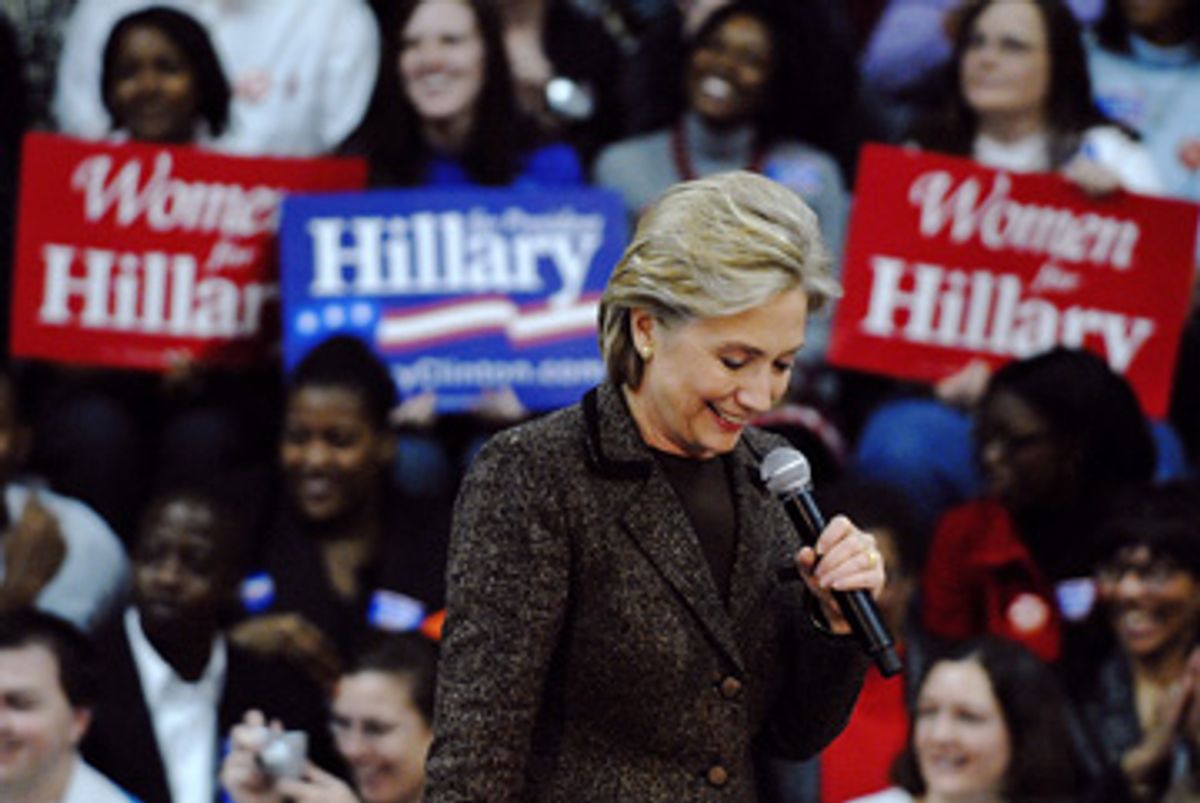 Every warm-up speaker in a presidential campaign should aspire to be seen, heard (briefly) but never, ever remembered. Bob Johnson, the founder of TV's Black Entertainment Network (BET) and the owner of basketball's Charlotte Bobcats, broke that cardinal rule of politics with his 10-minute stream-of-conscious introduction of Hillary Clinton.

From the moment he took the microphone at a Clinton town meeting at Columbia College, Johnson came across as an accident waiting to happen. He started off referring to Barack Obama as "a young, articulate black man" before explaining, "As a black person, I can call him articulate." Johnson ended up sniffing that Obama is "a guy who says that: I want to be a reasonable, likable Sidney Poitier [in] 'Guess Who's Coming to Dinner.'"

But these were not the lines that gave Johnson Sunday honors for self-inflicted political wounds. What did it was Johnson's riff that Bill and Hillary Clinton were "deeply and emotionally involved in black issues when Barack Obama was doing something in the neighborhood ... I won't say what he was doing, but he said it in his book." Despite the laughter from the largely white crowd sparked by the obvious cocaine reference, the Clinton campaign later released a statement from Johnson claiming (warning to readers: Be prepared to giggle) that he was "referring to Barack Obama's time spent as a community organizer."

It is implausible that Clinton (or anyone else in her campaign) whispered to Johnson backstage, "Bob, be sure to mention that coke thing." As political surrogates, billionaires -- just like big-name actors -- are the sort of ego-driven figures who are far too self-assured to follow the make-no-waves scripts provided by a campaign. But what Johnson's off-message comments may reflect is the larger frustration within the Clinton campaign over how to challenge Obama, a candidate bathed in non-stick coating.

Normally, the afterglow from winning the New Hampshire primary lasts more than five days. But Sunday was a day unlikely to be commemorated in Hillary's personal highlight reel. In addition to Johnson's gift of gab, Clinton had to endure an hour of jousting with Tim Russert on "Meet the Press," complaining on six separate occasions that her words were being "taken out of context." She was buffeted over her earlier maladroit comment that Lyndon Johnson had more to do with passing civil rights legislation than Martin Luther King Jr. (It is never a good sign when a Democratic candidate feels compelled to stress, "Dr. King ... is one of the people I admire most in the world.") And once again Clinton had to justify her 2002 vote authorizing the use of force in Iraq. (It is never a good sign when a candidate for president complains to Russert that he is pursuing a "Jesuitical argument.")

After facing off with Russert, Clinton found blessed refuge at Sunday services at Northminster Presbyterian Church in Columbia. Speaking from the pulpit to the largely black congregation, Clinton declared, "This is a moment worthy of celebration. Many of our parents and our grandparents -- and, I dare say, probably many of us -- never thought they would see the day when an African-American and a woman were competing for the presidency of the United States." John Edwards is, of course, still in the mix, but it is a telling symbol of change that the white male is running third.

The problem is that with a dizzying two dozen primaries scheduled between now and Feb. 5, the Democrats run the risk of having the emotionally charged issues of race and gender dominate all other concerns in choosing a presidential nominee. The problems facing the next occupant of the Oval Office range from nukes in Pakistan to neighbors packing because their mortgage has been foreclosed. Yet the political news of the last week for Democrats has revolved around Obama's debate crack that his opponent is "likable enough," Clinton's battle with tears on the eve of the New Hampshire primary, and the skirmishing over Martin Luther King's legacy.

With Obama spending Sunday stumping in Nevada (a state whose Jan. 19 caucuses are now riled by legal maneuvering over voting sites) and Clinton in South Carolina (where the Jan. 26 primary may shape the race), we are in the final days when personal campaigning actually matters. After South Carolina, Americans are about as likely to win enough money in the lottery to retire as they are to talk to a presidential candidate face-to-face. It will all be a blur as voters grapple to make their decisions based on fleeting images and all too little time for serious deliberation. As Stanford University political scientist Jim Fishkin puts it, "We have voting in a few unrepresentative states and then we have a mass televised spectacular in which the aspiration for participatory democracy turns into passive audience democracy."

The irrationality of the "too much too soon" political calendar has long been known -- but only now are voters about to come face-to-face with its demands for instant and irrevocable decision-making. The Democrats will hold only three more debates before the Lollapalooza Feb. 5 primaries. Media consultants estimate that a week of TV advertising in California, New York and the more than 20 other Feb. 5 states will cost about $35 million. These are daunting numbers and it is possible that only Obama (who is already on the air in Arizona and California) will have the resources to commit to a full Feb. 5 ad buy. What this means is that many voters will not even have the luxury of studying anything as substantive as 30-second campaign spots before they vote in the primaries.

Tempers are frayed this week in both the Clinton and Obama camps. There is too much on the line -- and too little time. Speaking to reporters in Las Vegas, Obama complained that the Clintons have "decided to run a relentlessly negative campaign and I don't think anybody's who's watching would deny that." All it will take is a spark (like Bob Johnson's toastmaster-from-hell introduction) for both campaigns to erupt in a blaze of fiery charges. It would be tragic if instead of making history, the Clinton and Obama campaigns end up giving the Democrats a primary fight they would rather forget.