The letter E is purple

My synesthesia made me feel like a freak. But if my son has inherited this neurological quirk, I hope he realizes what a gift it is. 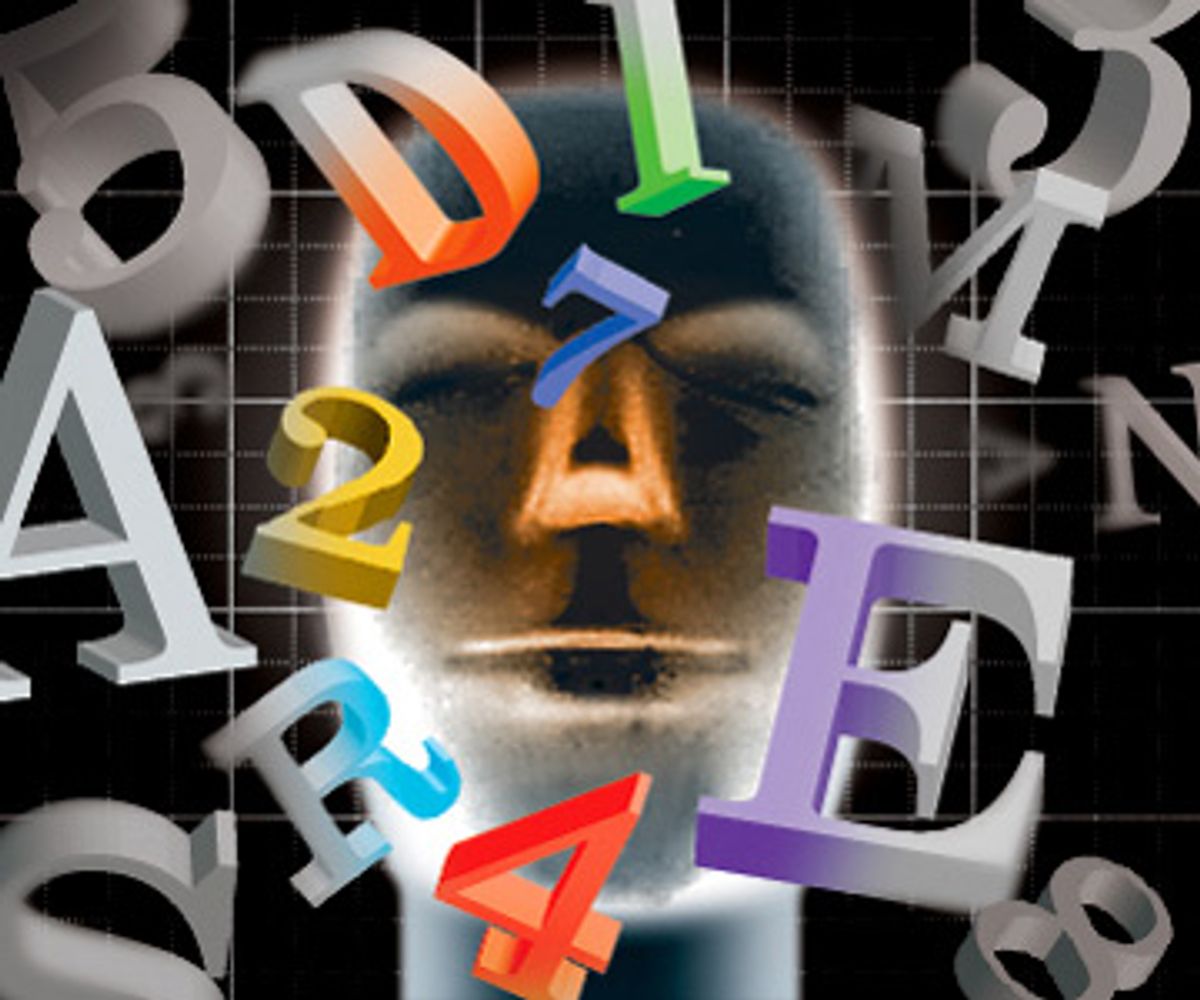 It was a warm summer afternoon in our corner of the Pacific Northwest, and as I pushed my 4-year-old in the swing, we debated the color of the sun pulsing down on us. Is it yellow or gold, he wanted to know, or is it white, and if it is, why are the spots in front of your eyes pink if you stare at it too long?

"That's a lot of colors," I said, only half attentive to the conversation. "What other colors do you see?"

He thought for a second, as if deciding whether or not to tell me something. Then he said, "The letter E is purple."

In that moment my whole world contracted. I knew exactly what "The letter E is purple" meant. Because, for me, numbers have always had their own color -- not just the number itself (though that, too), but the very character of the number, its presence in the world, is a color. An obvious, intrinsic color. Five, for example, is orange. Two is yellow. Seven is green. It is as natural and unchangeable as the color of someone's skin.

Speaking of skin, people had colors, too. Not everyone. But many people did, whether I liked them or not, whether I knew them well or not. I didn't have to think about it; it was just so. As apparent to me as their eye color.

"The letter E is purple" meant that my son may have synesthesia. I've had it all my life, though I only found out a few years ago that it has a name, and that others have it, too.

There have been many hypotheses about the cause of synesthesia since it was first studied with any rigor in the late 1800s, and a recent article in Nature Neuroscience posits that it is caused by an increased connectivity between relevant brain regions. Put another way, connections that have, over time, been "pruned" in others remain in place for synesthetes, though the reason for this is unknown.

Though there's no one else in my immediate family with synesthesia, except for possibly my son, studies suggest a genetic basis; women and left-handers also tend to have it more. Other than being a possible distraction, synesthesia doesn't interfere with daily functioning and isn't considered a disorder -- synesthetes perform normally on standard neurological exams.

But that's where the certainties end. Estimates of prevalence are variable and shaky, from 1 in 200 to 1 in 100,000, though that same study in Nature Neuroscience suggests 2 in 100 people may have grapheme-color synesthesia, the version that causes my numbers to come alive. "Synesthesia is 'abnormal' only in being statistically rare," according to the abstract from a scientific article in the journal Psyche. "It is, in fact, a normal brain process that is prematurely displayed to consciousness in a minority of individuals."

"Minority" is the operative word here. In fact, the problem with statistics on synesthesia is that many people who have it don't report what they're seeing. The Victorian scientist Francis Galton, cousin of Charles Darwin, writes about this with great feeling in his charmingly titled article "The Visions of Sane Persons" (1881). As Galton and later generations of psychologists have emphasized, sometimes synesthetes who have grown up seeing colors don't even realize that what they're seeing is far from the norm. That's how it was for me. For years I never realized what I saw was different, and so I didn't mention my colors to anyone, including my parents.

There was no reason to, anyway. For much of my childhood, I enjoyed my synesthesia, playing with it as a kitten would bat around a ball of yarn. I'd mentally run through my numbers, one through 10, as if flipping through a paint deck that always landed on my favorite colors. I'd turn my eyes to a teacher halfway through class to bask in her lavender glow. I'd allow her color to soothe me for a few moments, then turn back to the assignment at hand.

As a teenager, it became apparent to me that what I was doing wasn't quite normal. I wasn't quite normal, either. No one else ever mentioned a lavender teacher. I'd heard about auras -- radiant light surrounding a person, somehow revealing or reflecting his or her soul -- and I figured the color I saw from certain people, or numbers, was an aura. Had I somehow gained access to a spiritual dimension?

But the only people I knew who believed in such things were hippies, New Age goofballs and other types who were decidedly marginal in my high-achieving Washington, D.C., suburb. There was no scientific basis, as far as I knew, for what was going on in my head. And in my family, as well as the families of my friends (whose parents worked at the National Institutes of Health, as my father did), science was practically a religion.

I decided I was a total freak. And my freakishness, however private, placed me in danger of serious social alienation. Though I was confused about what to do, one thing was very clear. I didn't want supernatural powers.

In fact, I didn't want to be special in any way. I was in high school, and I wanted to wear the clothes everyone else wore, do the things everyone else did, and see what everyone else saw -- five qua five, in other words.

I couldn't do anything about the fact that Guess jeans, the outrageously expensive fad of the moment, were out of my reach. I couldn't do anything about the fact that I actually enjoyed eating lunch in the school library. But I could try to get all those damn colors out of my head, especially since the sensory overload was sometimes dizzying. I needed, once and for all, to clear some space in my brain. So I blocked my colors like any junior varsity football star would resist a surging offensive lineman. Sometimes, those colors tackled me instead. But I kept at it. And slowly, over the years, I began to close myself off from the barrage of perceptions I had lived with since I could remember.

Even then, I never talked to anyone about it. I figured if I had to be the only weirdo who saw colors where colors couldn't logically exist, then I owed it to myself to keep the secret.

I didn't worry about colors for many years, and though I retained all of my lifelong synesthetic associations, I only rarely generated new ones. Occasionally, I met a person whose color was obvious and unmistakable, and I couldn't shake the connection. In fact, I named my daughter Esther, in part, because her color matched her name, which to me is pink. Even now it brings me deep aesthetic and emotional satisfaction to know that she and her name are so well-paired.

Finally, in my early 30s, I read a short piece on synesthesia in a scientific journal. Decades of tension I never knew I'd carried instantly lifted. My freakishness had a name. And actually, I wasn't a freak at all. I wasn't the only one perceiving my surroundings in technicolor. I recognized myself in sentence after sentence, paragraph after paragraph.

After the relief, though, I felt sadness and, ultimately, regret. The sadness grew out of a nostalgia for my childhood -- the fun I once had with my colors, the deep comfort they brought me, and the way they mapped to specific points in my personal history. Before I became a self-conscious teenager, synesthesia facilitated some of my happiest quiet times. It was a way to soothe myself, to assuage my own anxieties. When I met people whose colors were obvious, the color often became a way to read them and their motivations. Those colors helped me manage and navigate an increasingly confusing world.

The regret came the moment I read the phrase "the gift of synesthesia" in that scientific article. Because, by then, I'd come to accept and even like my eccentricities; I seized on the well-documented link between synesthesia and artistic originality. (Some famous synesthetes include the writer Vladimir Nabokov, the artists Wassily Kandinsky and David Hockney, musician Franz Liszt and the physicist Richard Feynman.)

I recently outed myself as a synesthete to my family, and they were astounded -- especially my father and brother, who are both neuroscientists.

"Why didn't you tell Dad?" my brother asked. "He's spent his entire career researching the brain. Didn't you think he'd be interested?"

In fact, many scientists are intensely interested in synesthesia right now. The revolution in cognitive science and the sophistication of new neuroimaging techniques like functional magnetic resonance imaging means that the study of cross-talk among the senses is white-hot.

As breakthroughs make it possible for scientists to look more precisely at connections and pathways in the brain, more evidence-based articles on synesthesia are being written than ever before, and in 2006 the brain research journal Cortex devoted an entire issue to synesthesia.

A University of Washington neuroscientist has even produced a Web page on synesthesia for kids. "Perhaps you are completely convinced that Wednesdays are light red," it says. "If you have experiences like these, you might have synesthesia."

But when I was a kid, I never would have guessed the rainbow that filled my head was a function of how many nerve cells were touching deep inside my brain. To me, those shades of light were as real as the bright sun that hovered over our swing set the day my 4-year-old announced that E is purple. I don't know yet if his letters actually pulse with color. But, for his sake, I hope they do.

Alison Buckholtz is a writer living in Anacortes, Washington. Her memoir on life as a military family will be published by Penguin in 2009.