Clinton, Obama and Edwards mostly played it safe at the debate table. But even small moments can be big in the heart of primary season. 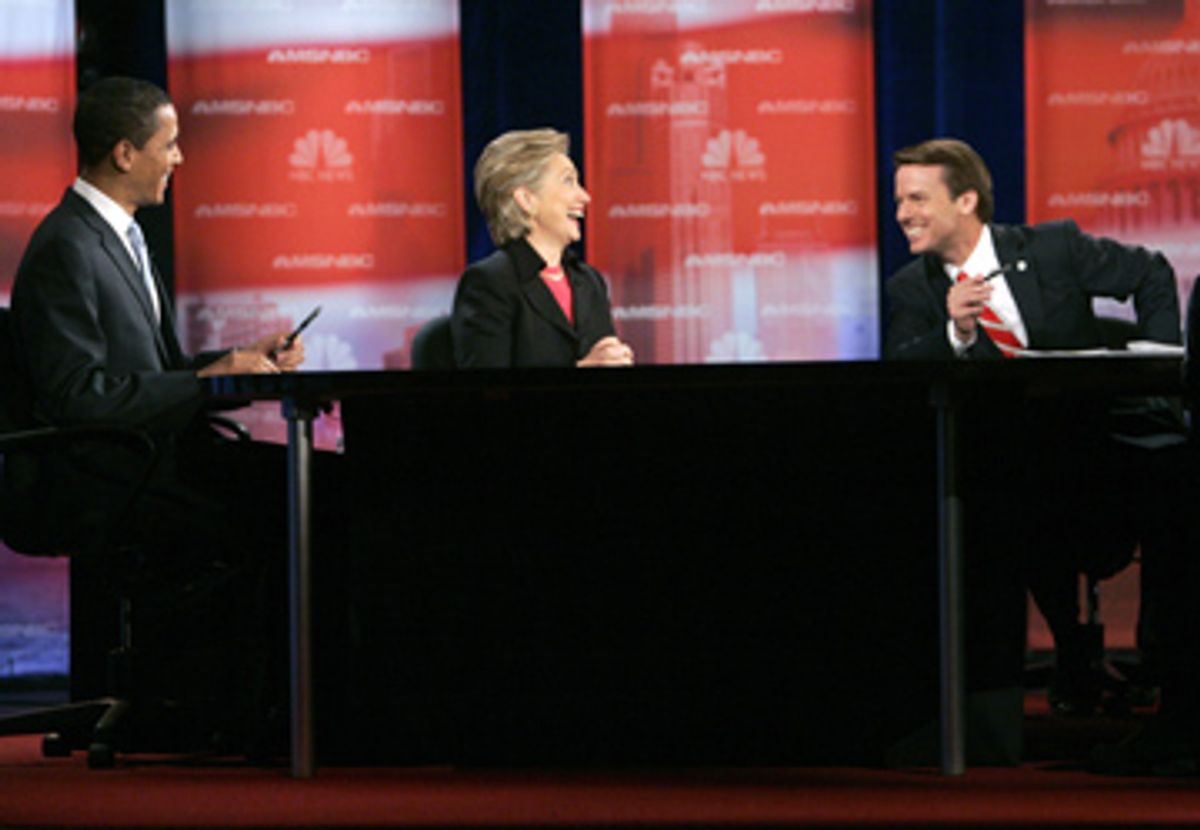 Maybe they spiked the bottled water onstage with Valium. Maybe after the stunning turnabout in the New Hampshire primary, the three major Democrats decided that they could not risk spontaneity. Or maybe the skirmishing over racial matters in the past few days scared everyone straight. As Hillary Clinton put it in the opening minutes of Tuesday night's languor-in-Las Vegas debate, "We're all family in the Democratic Party."

It says something about the dramatic narrative of a debate when the emotional high point is provided by a geographically challenged moderator. After a commercial break late in the evening, NBC's Brian Williams welcomed everyone back to "Los Angeles" -- not Las Vegas. Williams' confusion was slightly justified, since Democrats in 24 states (including California, where voters could fill out absentee ballots as they watched) will be choosing their presidential favorites in the next three weeks. The prime targets, though, were Democrats in Nevada (whose low-turnout caucuses on Saturday are difficult to handicap) and here in South Carolina, the site of the only primary (Jan. 26) before Woozy Tuesday Feb. 5, when there are contests in 22 states.

The press box touts had to work overtime to declare winners and losers, since, in Lake Wobegon fashion, Clinton, Barack Obama and John Edwards were all above average. For all their short-answer limitations, for all the media scorecards and eagerly anticipated gotcha moments (when the two-hour talkathon ended, we were still waiting), debates play a major role in how we choose presidential nominees. The exit polls from New Hampshire (which remain our best guide to the sentiments of real primary voters) revealed that 48 percent of Democrats said that debates were "very important" in making their decision. Clinton, incidentally, ran particularly strongly among this group.

The former first lady may have lost a few graciousness points early in Tuesday's debate when she refused to say flatly that Obama and Edwards were prepared to be president. As she put it tartly, "I think that's up to the voters to decide." But minutes later she got her chance to trump Obama by playing the experience card. After the first-term Illinois senator admitted that he was not a natural administrator ("I need to have good people in place to make sure that systems run"), Clinton pounced. "I do think that being president is the chief executive officer," she said. "I respect what Barack said about setting the vision, setting the tone, bringing people together. But I think you have to be able to manage and to run the bureaucracy."

Obama, who sometimes faded into the background when standing at a lectern during earlier debates, was probably the prime beneficiary of the knights-of-the-round-table format. He consistently seemed more at ease than his rivals -- and adroitly parried Clinton's argument about managing the bureaucracy by invoking George W. Bush. "He was very efficient," Obama said. "He was on time all the time and ... I'm sure he never lost a paper ... What he could not do is to listen to perspectives that didn't agree with his ideological predispositions." Then Obama added a sentence clearly designed to remind voters of a similarity between Clinton and the current occupant of the Oval Office: "What Bush couldn't do is to bring in people with different perspectives and bring them together."

Edwards -- fighting for relevance after his weak third-place finish in New Hampshire -- had the most to gain simply from sharing the table with Clinton and Obama. True, Natalie Morales, one of the moderators, bluntly asked him, "What is a white male doing running against these historic candidacies?" In response to this virtually unanswerable question, Edwards saluted his rivals before adding, "They've both asked not to be considered on their gender or their race. I respect that."

Edwards' goal for the evening, which was only partially achieved, was to point out enough differences on issues (he was the only candidate onstage unequivocally against nuclear power) that voters would forgive him for having the same gender and race as every other presidential nominee in American history. After teaming up with Obama to go after Clinton in the final New Hampshire debate -- with the disastrous result of creating a sympathy backlash -- Edwards was his own man Tuesday as he offered equal-opportunity challenges to both his rivals.

Edwards caught a break when the Nevada Supreme Court wisely ruled just before airtime that Dennis Kucinich did not have to be included over the protests of MSNBC. Given that Kucinich collected only an embarrassing 3,901 votes in the New Hampshire primary, it is hard to argue that fairness demanded that he be entitled to a national platform. But had there been four candidates, Edwards would have, in a sense, been consigned to the second tier. The 2004 vice-presidential nominee was already suffering for underexposure: Between Jan. 6 and Jan. 11 (a five-day period that bracketed the New Hampshire primary), Edwards received roughly one-fifth as much media coverage as Obama and Clinton, according to an analysis prepared by the Project for Excellence in Journalism.

The temptation is to conclude that the Las Vegas lullaby changed little in the tightly fought contest between Clinton and Obama. The co-front-runners, after all, played it about as safe as a gambler who puts half his chips on red and half on black at roulette. On the other hand, the lesson from New Hampshire is that small debate moments -- such as Obama saying that Clinton was "likable enough" -- can cause major waves for voters bobbing in a sea of indecision. Still, the best theory about the lasting import of Tuesday night's debate remains: "What happens in Vegas stays in Vegas."