Is Clinton the best to beat Huckabee? Or Obama to rout Romney? How this year's race makes a mockery of voting for the most "electable" candidate. 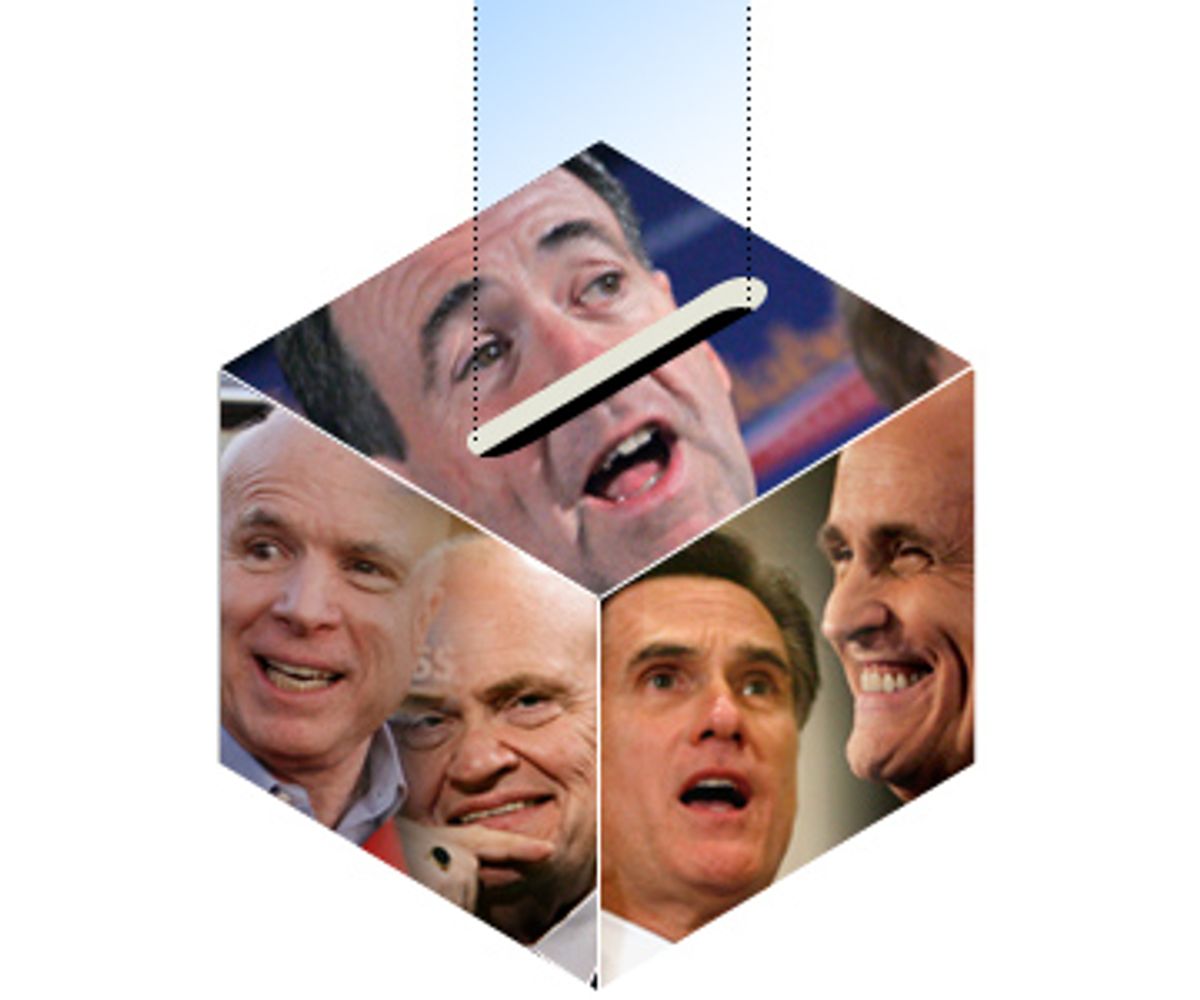 Mike Huckabee is in a realm by himself these days when it comes to harnessing the politics of class resentment. Arriving in South Carolina on Tuesday afternoon, Huckabee cheerfully mocked every upmarket cultural symbol in an extended riff on job loss. "The economy's going great, if you're the guy in the front office," Huckabee told a midafternoon rally in Rock Hill. "If you're the head of the company, the CEO, it's probably going swimmingly well. If you're the person for whom 'summer' is a verb ... if you went to Harvard or Yale, you probably think that the economy is doing just dandy."

Just three days before the South Carolina primary, there is no clear Republican front-runner in sight, just five candidates stuck in the backstretch. But how should the Democrats run against Huckabee -- the winner of the Iowa caucuses -- if he were to become the Republican nominee? Should they send into battle Hillary Clinton (Wellesley and Yale Law School) or Barack Obama (Columbia and Harvard Law School)? Or is their best partisan matchup John Edwards? The 2004 vice-presidential nominee, who attended state schools in North Carolina, may lack Huckabee's easy sense of humor, but he can rival the Republican with his own son-of-a-millworker tales of a hardscrabble upbringing in the South.

But wait. Huckabee at 52 is the youngest Republican presidential contender -- and if the fall campaign were to be fought on generational grounds, it argues for the torch-is-passed candidacy of the 46-year-old Obama. Or, maybe the shrewdest ploy would be to counter the foreign-policy weaknesses of Huckabee, a candidate who spent 30 hours in blissful ignorance that the latest National Intelligence Estimate revealed that Iran had abandoned its nuclear program. That fight-him-on-the-issues approach does seem made to order for Hillary Clinton, a Democrat who also knows a thing or two about Huckabee's home state of Arkansas.

If you find these calculations dizzying, try multiplying them by the other four plausible GOP nominees: Mitt Romney (the Daddy Warbucks candidate who just won Tuesday's Michigan primary), John McCain (whose comeback tour peaked, at least temporarily, in New Hampshire), Rudy Giuliani (once considered the most electable Republican) and Fred Thompson (the former senator turned TV star whose potential has far outstripped his performance). Republican loyalists, of course, have to solve these same equations in reverse.

Never has there been a presidential season that has made such a mockery of the elusive concept of electability. At this point voters in both parties seem totally baffled about who would be their strongest candidate in the general election.

A new national poll -- conducted after the New Hampshire primary by the Pew Research Center for the People and the Press -- dramatically illustrates how fast this win-in-November calculus has shifted. Democrats still give Clinton a 46-to-35 percent edge over Obama on electability, but two months ago her margin on the same question was better than 4-to-1. On the GOP side, everything has switched. McCain (42 percent) is rated far ahead of Giuliani (17 percent) and Romney (15 percent). Back in November, 45 percent of all Republicans (presumably those caught up in a beat-Hillary-or-else frenzy) believed that Rudy was the GOP's best hope for averting the apocalypse.

In a normal political year -- with Iowa and New Hampshire in the rear-view mirror -- voters in at least one party would have settled on their nominee by now. This time around, five different candidates can already claim to have won a major primary or caucus. Instead of matchups, it is more a complete mash-up.

But there is the irresistible human temptation to impose rationality on chaos, even if the mere act of trying to sort it all out is the height of irrationality. Therefore, taking a cue from the old-fashioned Chinese restaurants that instructed diners to take one dish from "Column A" and another from "Column B," here are some further tentative thoughts about candidate pairings for the 2008 general election.

The obvious contrast would be Obama, the only Democrat young enough to have only childhood memories of Vietnam. The 25-year age gap between the two presidential nominees would be a new modern record, eclipsing the 23 years that separated Bob Dole and Bill Clinton. Perhaps all you had to know about the 1996 election to guess the outcome was that the oldest first-time presidential nominee in American history was challenging the second-youngest president to seek a second term in the 20th century.

Although no Democrat (or Republican) could possibly compete with McCain's five and a half years as a POW, Hillary Clinton, at least, has spent seven years in the Senate opposite McCain on the Armed Services Committee. Clinton vs. McCain would also be the one pairing apt to equalize the experience issue. As for Edwards (and this would not be an ideal matchup for him), he would be the counter-programming candidate, who would be always fixated on the economy while McCain wanted to talk global military strategy.

Both Clinton and the former Massachusetts governor were born in 1947 -- and this contest would be the latest installment of the baby boomer wars. If Romney felt no compunctions about running attack ads against McCain and Huckabee, he certainly would not lie awake nights brooding about whether to go viciously negative against Clinton. In a campaign against the robotically perfect Romney, Clinton would match him in a competence competition and certainly be more than "likable enough."

This may be an odd pairing with Obama, since no candidate is more the flip side of hope than Romney, who has been denounced by other Republicans for a campaign undergirded by cynicism. Romney's business background would give a hint of novelty to his résumé, although his single term as governor would wipe away the inexperience issue for the first-term Illinois senator. But Romney (the governor's son who was well on his way to becoming a billionaire when politics intervened) would probably provide the perfect foil for Edwards' populist appeal.

Reduced to virtually a one-state strategy in Florida (a place that upended another New York City mayor, John Lindsey, in 1972), Giuliani faces long odds in even surviving the Feb. 5 primaries. But if he were to somehow snare the nomination, the most intriguing matchup might be against Obama -- not Clinton. Obama's hope-mongering is so at odds with Giuliani's fear-mongering that this would be the ultimate yin-yang political competition.

Obama would offer the high-energy contrast to the Mr. Molasses of the Republican field. Edwards matches up well, since he can sing "The Song of the South" as well as Tennessee-born Thompson and he would relish going after the senator-actor's other career as a lobbyist. As for Clinton, this one could get tricky as Thompson's "country lawyer" shtick might work against Clinton's briefing-book mastery. But Thompson has to win something in the primary season before anyone need get too concerned about any matchups with him.

What this little exercise underscores is the folly of deciding whom to vote for based on who is deemed the most likely to win. At this point in 2004, John Kerry looked like he was on a trajectory for the Oval Office, but that was before the Swift boat attacks and the themeless, feckless Democratic campaign. And remember: Democratic voters last time knew exactly who their opponent would be -- and they still could not calculate electability.