Did somebody say "recession"?

The last time politicians fought over how to jump-start the economy, we all got paid. Can we now expect a check in the mail? 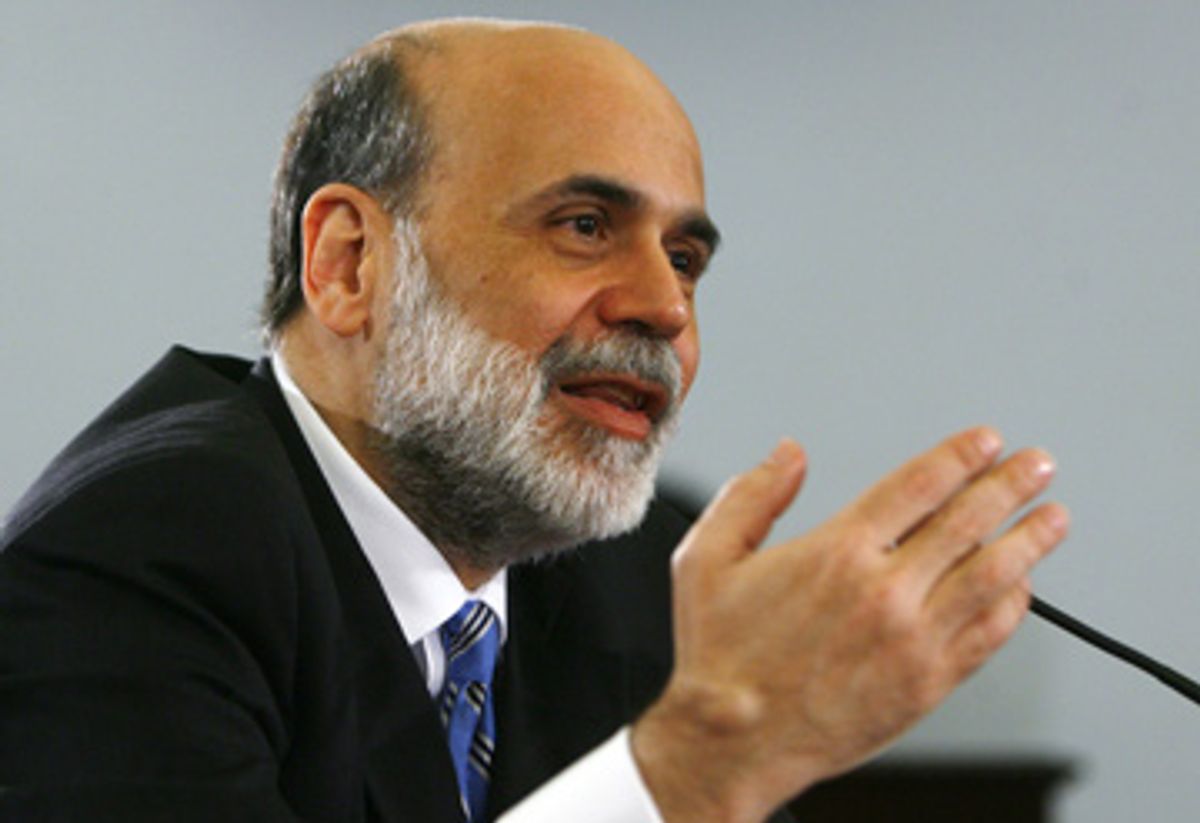 Federal Reserve chairmen don't look kindly on legislative attempts to juice the economy by cutting taxes or boosting government spending. Their preferred strategy involves monetary policy: increasing or decreasing the amount of liquidity sloshing around the economy by raising and lowering interest rates. So when Ben Bernanke told Congress on Thursday that "fiscal action could be helpful, in principle" for addressing the current economic woes afflicting the United States, policy makers paid attention. The clamor for government to do something now to reinvigorate the economy has become deafening. If Bernanke is joining the outcry, then rebate checks from the IRS must practically be in the mail.

Economists on the right, economists on the left, and economists in the center are speaking with a surprisingly united voice about giving direct assistance to Americans about to be hit by a runaway recession. Martin Feldstein, Ronald Reagan's chief economic advisor, has declared himself in favor of a fiscal stimulus package, and so has Lawrence Summers, secretary of the treasury under Bill Clinton. There are differences -- Feldstein is against extending unemployment insurance, while Summers supports doing so -- but most economists are saying pretty much the same thing: Get some tangible cash into the hands of those Americans who need it most and would spend it quickly, boosting overall demand and giving the economy a kick in the pants. In practical terms, a rescue package could include such elements as tax rebates, an extension of unemployment benefits, and higher food-stamp allowances.

The Bush administration wants to add some goodies for its constituents: an investment tax credit for business and an agreement to make the tax cuts pushed through in 2001 and 2003 --currently set to expire in 2010 -- permanent. But such elements are not part of the prescription most economists are currently recommending.

When you're looking for short-term help, making life easier for business doesn't deliver much of a wallop to the economy. Nor does making tax cuts (which primarily benefited the well-off) permanent. Extending them will have no short-term impact on this year's economic downturn. And the failure to match those tax cuts with equivalent cuts in spending has ensured ongoing budget deficits that spell long-term trouble for the economy.

The magic words of the day are "timely, targeted, and temporary." You can read all about it in studies released over the last two weeks by the left-wing Center for Economic and Policy Research, the center-left Brookings Institution and the nonpartisan Congressional Budget Office.

If all this sounds as though it came straight out of the Democratic playbook, well, yes. For anyone who remembers the last time politicians fought over how to cope with a recession, in 2001, there's a little bit of a through-the-looking-glass feel to the sudden consensus. That year, progressive economists and Democrats argued for a tax cut targeted at the poor and working class, and bitterly opposed the centerpiece of Bush's economic agenda: tax cuts that overwhelmingly benefited the richest Americans. The Democrats won a minor victory -- the tax rebate that put checks of around $300 into the pocketbooks of most Americans was a Democratic idea, co-opted by the Bush administration -- but only at the price of a major defeat, a massive tax cut for the rich that helped wipe out Bill Clinton's budget surplus and inaugurated a new era of ongoing budget deficits.

Today, the Bush administration has been cagy about whether it's going to push for making its cherished tax cuts a part of a new fiscal stimulus package. To do so would likely kill any chance of a deal being cut with the Democratic majority in Congress. Given that majority, the Democrats are in a considerably stronger position this time around to help determine the form of any new government action. They are further aided by a growing consensus that the case for targeting a tax cut at poor and working-class Americans is smarter economics than ever. Which raises the questions: Why? What do we know now that we didn't know then?

Jared Bernstein, a senior economist at the Economic Policy Institute, says nothing has changed. "A Keynesian is a supply-sider in a recession," he jokes, implying that as soon as economic ill winds begin to blow, fans of trickle-down economics turn into New Deal activists. "Most economists since Keynes accept that there is a role for precisely this kind of policy when the private sector engine fails."

Maybe so. But there is evidence that the recession of 2001 gave us new insights into what people do when handed money by the government. If they're poor, they spend it. If they're rich, they sock it away.

"The standard view of more conservative economists is that stimulus packages like this don't work, because people know that whatever money they get now will be taxed back in the future," says John Schmitt, a senior economist at the Center for Economic and Policy Research. "But there has been some careful research of exactly what happened in 2001, and it showed that's not the case. People who are up against the wall, paying their bills, maxed out on credit cards, don't put it into the bank -- they spend it."

In 2001, some 90 million households received $38 billion in rebates, in the form of checks for $300 for individuals and $600 for married couples. In 2005, a landmark paper by economists David Johnson, Jonathan Parker and Nicholas Souleles, analyzed how and when those rebate checks were spent.

"We found there was a fair bang for the buck," says Parker. "It provided a substantively important effect. And those who spent it more quickly were those who had low incomes and low liquid assets."

Another study pored over credit card data. According to the Congressional Budget Office analysis, "[It] concluded that households with lower credit card limits, those with credit card balances near the limit, and those that used their cards intensively increased credit card spending much more than other households in the nine months after receiving their rebates."

The fiscal stimulus package "strengthened the case for fiscal policy -- it was a rapid response to a slowing economy," Parker says.

The benefit of getting money into the hands of the poor and maxed-out is that when they turn around and spend it, it increases the overall demand for goods and services in the economy. That impels businesses to rev up production lines and hire more workers. The effect is like priming a pump, or jump-starting a car.

The consensus of economists today is that the rebate checks delivered in the summer of 2001 -- and spent immediately -- did take a bite out of the recession. The rapidly solidifying consensus that action should be taken now, in a "timely, targeted and temporary" fashion is in part due to that experience -- one of the few occasions in modern American history when the government managed to act quickly enough to make a difference.

But there's a catch. Instead of confining itself in 2001 to the kind of surgical strike that economists are now recommending for 2008, the Bush administration seized upon the downturn back then to push through a massive package of tax cuts for people who didn't need them, and who didn't respond by increasing their own spending. As we all know now, those tax cuts were not matched by spending cuts, resulting in an unfunded and long-term liability that now constrains the government's ability to act as decisively as might be necessary if the economy runs into a harsh recession.

We know what worked in 2001. But we also know what didn't work. The challenge for Congress now is to see if it can learn from the mistakes and duplicate the successes.